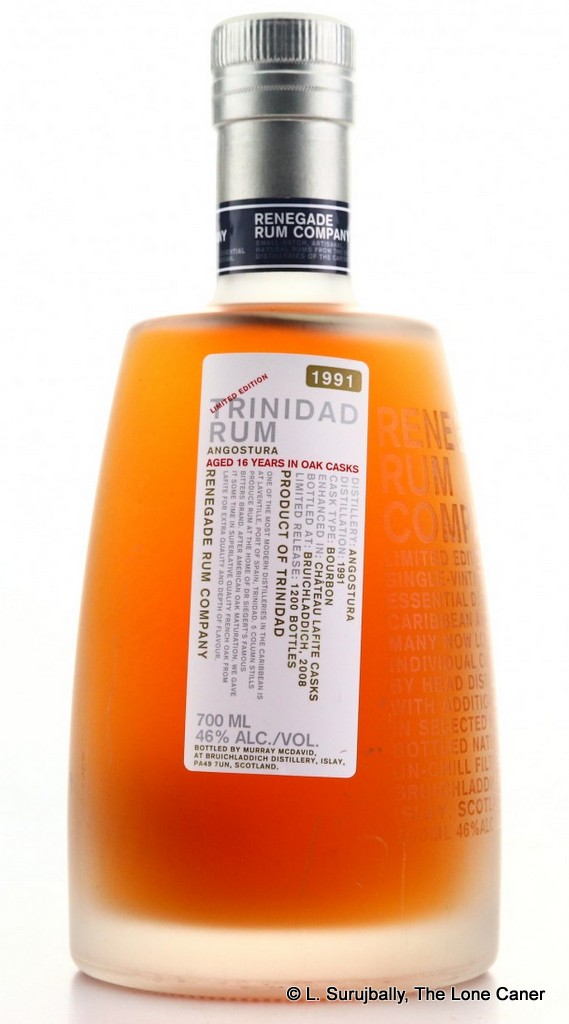 I’m not always and entirely a fan of Renegade Rum, but will unhesitatingly concede that they are among the most interesting ones currently available, and deserve to be sampled. Un-chill filtered at the Bruichladdich Distillery on the Isle of Islay in Scotland, these limited editions have the potential to popularize single-vintage rum if one can get past the whiskey-like finish that jars somewhat with what I expect a rum to be.

My research notes that Renegade Rums trawls the Caribbean estates for traditional single distilleries that are no longer in operation or have some stock to sell, and purchases supplies from places like Guyana, Panama, Jamaica, Barbados, Grenada, and Trinidad — then completes the maturation in oak bourbon barrels, or those which have held madeira, port or wine. This impacts the taste quite significantly, I’ve found, but more than that, it makes the release extraordinarily limited: this one from 1991 was only 1380 bottles.

I’m unclear how old the 1991 Trinidad rum actually is, since it is advertised as 17, but 16 is printed on the bottle. Whatever the true age, the palate on this 46% (92 proof rum) is uniformly excellent, with notes of port and oak and a very subtle taste of caramel. The finish is not as sweet as I would expect, and does not last as long or as smoothly as a 16 year old rum perhaps should, though hints of burnt sugar and apples can be discerned (this is probably from the French port barrels used for the final ageing). What stops this from being a stellar review is simply the way the somewhat harsh and short finish takes some getting used to – when I first tasted this, I grumblingly compared it to a whisky. See, I’ve been getting sotted on the grog for more than half my life, and us West Indian hicks don’t particularly care to have our national drink turned into a Scottish home brew.

Ok, so that is snooty. Don’t get me wrong, however: I liked it precisely because it’s different, had character, texture, body and a good strong flavour. I wouldn’t drink it neat, though, or with ice (though I did both to write this review). This one, for all its rich provenance and comparative rarity, will be drunk rarely.*

* My good friend Keenan, horrified at my cautiously tempering the good stuff with coke (I was just checking, honest), snatched it away, proceeded to drink it with bowed head and misty eyes on the rocks, complimented it most fulsomely on its character, and disdained the cheap Lambs spiced rum (3rd tier, really) I was happily getting smacked on. I may not compliment Renegade’s creation as much as he did — he had to be dragged off, screaming “Leh we tek wan moh shot, bai” when the evening was over — but at least one person really really appreciated it, and the bottle I have will be kept for his use when next he is let out to play. 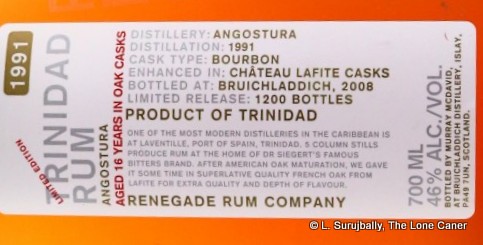