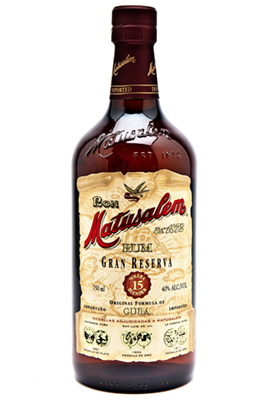 Having friends who will trot out cherished stocks of the good stuff for me to taste and comment on is always a plus.  Having those who share my interests in rum, and pick up obscure bottles from odd distilleries in faraway places is even better.  Granted every now and then one runs across paint thinner or liquified rat turds masquerading as rum, but in the main, the odds work in my favour. Still, though, I’ve had to take a leaf out of the Last Hippie’s book and always have a notebook on hand.  I may be fairly clever, but I’m somewhat prone to losing a few IQ points when having my sixth or seventh…or shev’nt’nth shot of…whu’ever. And that impacts on my note-taking, so I have to watch it.

Anyway it was with real delight that I saw this intriguing 15 year old rum from the Dominican Republic  joining its cousins the English Harbour 5, the Bundie, the El Dorado 21 and the Angostura Royal Oak on the table.  Now some might shake their heads and question my liver, my sanity or my ability to have so many competing rums swirling around my palate and still maintain my sobriety or sense of taste (which would be much degraded by the Bundie), but I exist to rise to challenges such as these, and sacrifice my finer feelings for the good of The Club.

A Super-Premium rum (whatever that might mean), this french-oak-barrel matured rum is the top of the line for the Ron Matusalem distillery which originated in Cuba in the 1800s, and which captured a fair share of the market right up to the point where some upstart johnny-come-lately called Fiddle…Fidelity…Fido…whatever (he had a beard and dressed in fatigues) took over from the US-backed dictatorship in 1959. The company was re-established in the USA and removed to the Dominican Republic in 2002 after one of the descendants of the founders gained full control of the company (the family branches had been feuding, leading to the brand’s decline). Interestingly, Matusalem’s master blenders are all descendants of the original founders as well, and are supposedly masters in the technique of solera blending originally developed for sherry and brandy, where barrels of rums from different stages in the maturation process are blended to produce the desired, unique blend. And while my bottle never noted it, this is a solera, which means the “15” on the label does not mean the youngest in the blend, but the average.

The Gran Reserva is a deep gold colour, though not quite dark; it looks like burnt honey. Not light either in body or colour or density. The nose contains strong indications of oak which, to my mind, drown out the subtler vanillas and toffee that linger better on the taste buds; and it is not as sweet as other offerings…they may have stinted on the sugar or caramel.  In my opinion, then, it does not impress when drunk neat or on ice – it is too much like a whiskey, in smell and body and taste (this may be a deliberate attempt to distinguish the product from other rums of equal vintage), and it burns going down, with a short and smoky finish, the way no good 15 year old should.  If I wanted whiskey I’d cross to the dark side and genuflect to the Scots, so on that level it fails.  However, I liked the taste and feel on the palate – the slightly higher density and long maturation period helps give it a really good, silky feel – I just don’t appreciate the taste that much.

That said, as a mixer with coke, whatever screams of outrage from purists, the thing is stellar. It has no such explosion of flavour as the EH5 did, but it develops a very solid, multi-layered and robust taste where the coke provides exactly the level of sugar that enhances the taste of the rum, to produce an excellent butterscotch taste that the silky texture of the rum goes with beautifully.

And that makes me conflicted, not least because I generally like soleras.  It seems that an aged sipping rum like this should not have to be mixed to enhance it to the level I rate so highly. I concede that this may partly be my sweet tooth and love of vanilla and caramel and butterscotch (that’s not butter made in Scotland, Curt, just in case you wondered), and partly my own preconceived notion of what a good sipping rum should be like.

Be that as it may, I believe a whiskey connoisseur, or someone with a different palate from mine, will love this rum.  As a mixer, I think it’s great — but why pay more for this when so many able, younger, cheaper mixers exist? The test of a good aged rum is whether it can stand on its own without adornment or enhancement. On that level, much as I like what comes out of this baby when coke is added to it, I must sadly state that it doesn’t measure up to its hype or pedigree when taken neat.