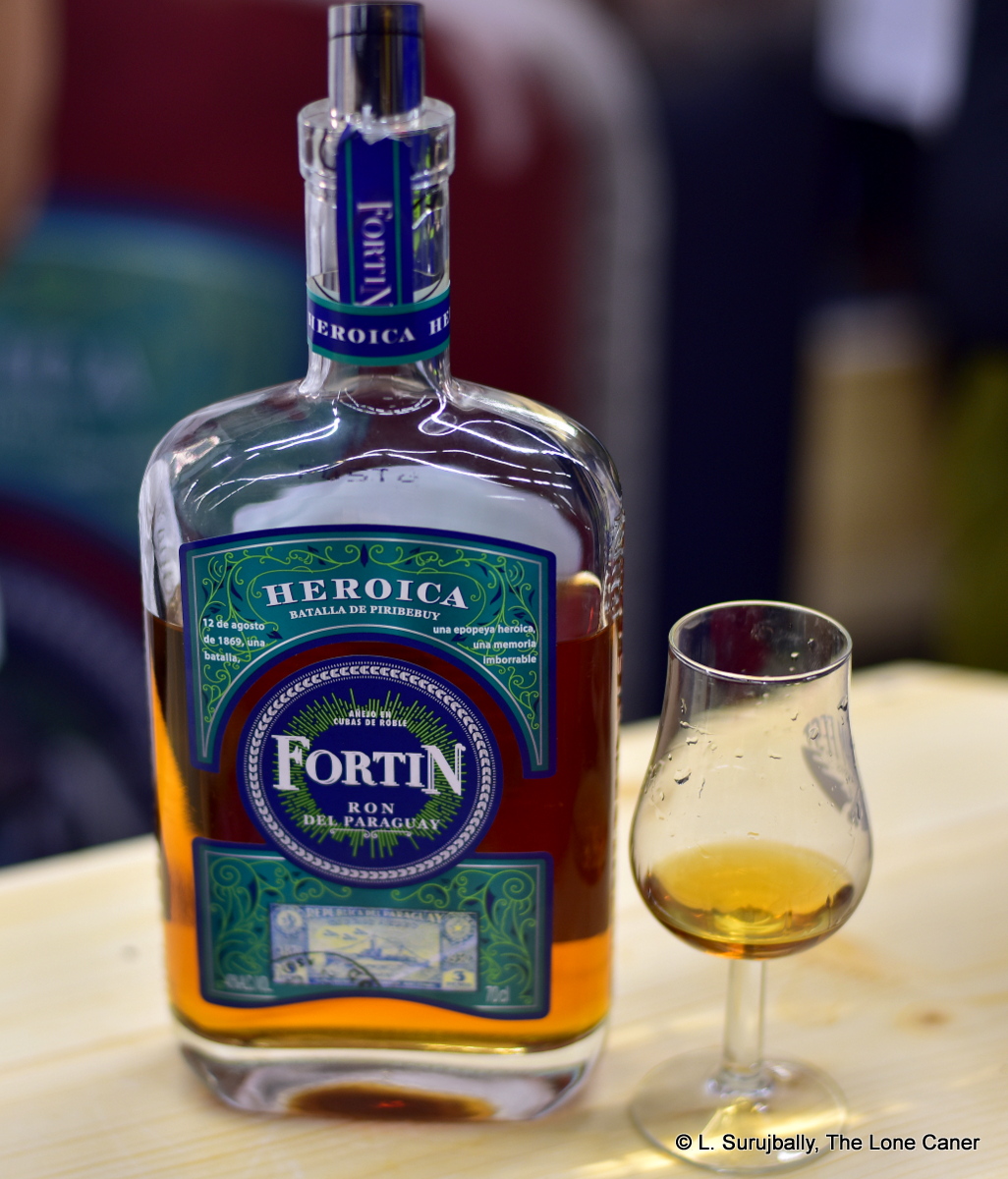 Every now and then we find some peculiar, almost completely unknown rum in some unlikely spot, and are struck by exactly how far flung and widespread the production of the spirit really is. I mean, if you aren’t a rumfest junkie or deep diver (and perhaps even if you are), can you recall much about Paraguayan rums?

Paraguay — one of two landlocked countries in South America (quick, name the other one) — is something of a newcomer on the international rum scene, and most of the rums they have made that are distributed abroad have only come on the scene in the last two decades — previously, just about the entire production was local, or regional. And according to some basic research, so far they have stuck with the traditional rons and not gone too far off the reservation. All that is now changing, as they begin to seek a space on the export shelf.

The Heroica we are looking at today is a rum created to take its place alongside its siblings the Black label, the Suave, and the lightly aged Anejos – it is named to commemorate the fallen heroes of the Battle of Piribebuy in August 1869 (part of the devastating Paraguayan War which that country eventually and decisively lost). Yet oddly, it is not mentioned on its website, and neither is either of the other two rums which won prizes in the International Rum Conference in 2015 and 2016. 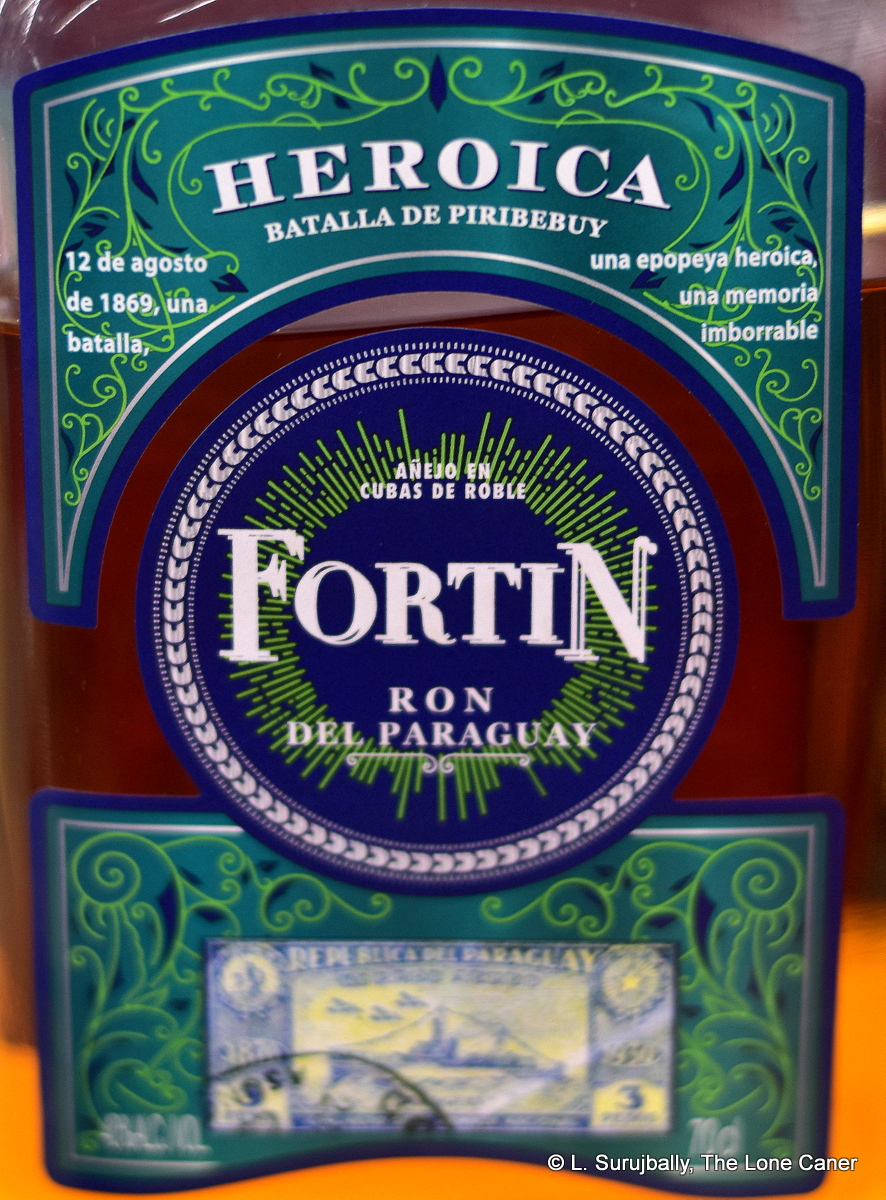 Here’s what we know – made from rendered sugar cane juice (“honey”), fermented for 72 hours using wild yeast, column distilled, then aged in all kinds of barrels – American oak (ex-bourbon), cognac, Pedro Ximenez and also Marcuya “fruit of passion” wood from Paraguay. Once that’s done, the resultant rons are blended to form the final product. The age is currently unknown — I’ll update this paragraph if I get feedback from their marketing folks — but I’ll hazard a guess it’s medium…about 3-6 years. Little of this, by the way, is noted on the label, which only says it is a Paraguayan rum, commemorates the 1869 battle, is aged in oak vats and 40%. Wonderful. Clearly the word “disclosure” gets more lip service than real purchase over there.

All right, tasting notes. The nose begins with a standard “Cuban” profile – honey, caramel, citrus and faint molasses. These are leavened after some minutes by intriguingly deeper earthy and musky notes of damp soil and wet leaves, some salt and lighter fruits. But mostly it’s the first four — quite straightforward, not too complicated, an easy basket of soft and breathy vapours that cause no problems whatsoever.

The taste pretty much continues in that vein. It’s soft, it’s warm, it’s easy, it demands nothing, and provides a feather pillow for your taste buds. That might seem to be a disqualifier, but while it is to a certain extent simple, it also has enough edge and differences to make to display some character too. One can easily discern and separate honey, cherries in syrup, ice cream, salted nuts, citrus, molasses…underneath all that is the loamy sense of a damp, cool, leafy forest floor, both deep and sharp at the same time. There is a vague aftertaste of nuttiness and sour cream and bread, but this is relatively minor, adding little to the complexity of what’s on offer. And it finishes fast — soft, a quick whiff of toffee, nougat and candied oranges, and it’s gone.

In fine, there’s not much urgent vitality and shivering strength here, nothing to wow the socks off or blow the hair back. It lacks punch and vibrancy, is too easygoing to appeal to me (though clearly not to its adherents and national fans) and seems to want to play it safe within the overall ambit of Spanish style rons. Still, it exhibits more of interest than these remarks might suggest and I think the low strength might be key to understanding how it fails to excite the attention that it could get were it stronger, and those background tastes could come out more decisively.

Spanish-heritage-style rums from South and Central America all have a certain similarity, and while I don’t care for their light softness as much as I once did, I continue examining any new one that crosses my path in the hope of finding one that’ll rejuvenate my affection for their softer charms. This isn’t it, but just for the opportunity to dive into a new rum from a country that’s not renowned for rum and that has produced one we have not heard of before, I can’t say that trying this one was a waste of my time. Fortunately, I liked it enough, and for anyone who likes this kind of ron, I doubt they’d be disappointed in their turn.

Fortin dates from the post-1989 era and takes advantage of a change in legislation regarding alcohol at that time. From 1941 to 1989 the production and sale of alcohol (and spirits) was a state monopoly, run by the Paraguayan Alcohol Corporation in which the Government and producers both had stakes. Officially this was to rationalize standards, assign quotas, regulate competition and prevent tax evasion, but in reality it was to ensure the commercial elites went into business with the government to share in / siphon off the revenues. After Alfredo Stroessner (the last of a series of military jefes ruling since the 1930s) was toppled in 1989 the laws were relaxed and private industry began to revive.

Fortin was formed around 1993 as a sugar producer by Gustavo Díaz de Vivar, and although it started in Capiatá area to the immediate SE of the capital, Asunción, the company soon moved further east to the town of Piribebuy; after the sugar business took off, he and his son Javier Díaz de Vivar (the current president of Fortin) diversified into rum production with a multi-column still bolted onto the already existing sugar factory they had built. I have an outstanding email to them about their production methods over and above what this article provides (e.g., where does the cane and honey come from?) so an update may come if they respond.