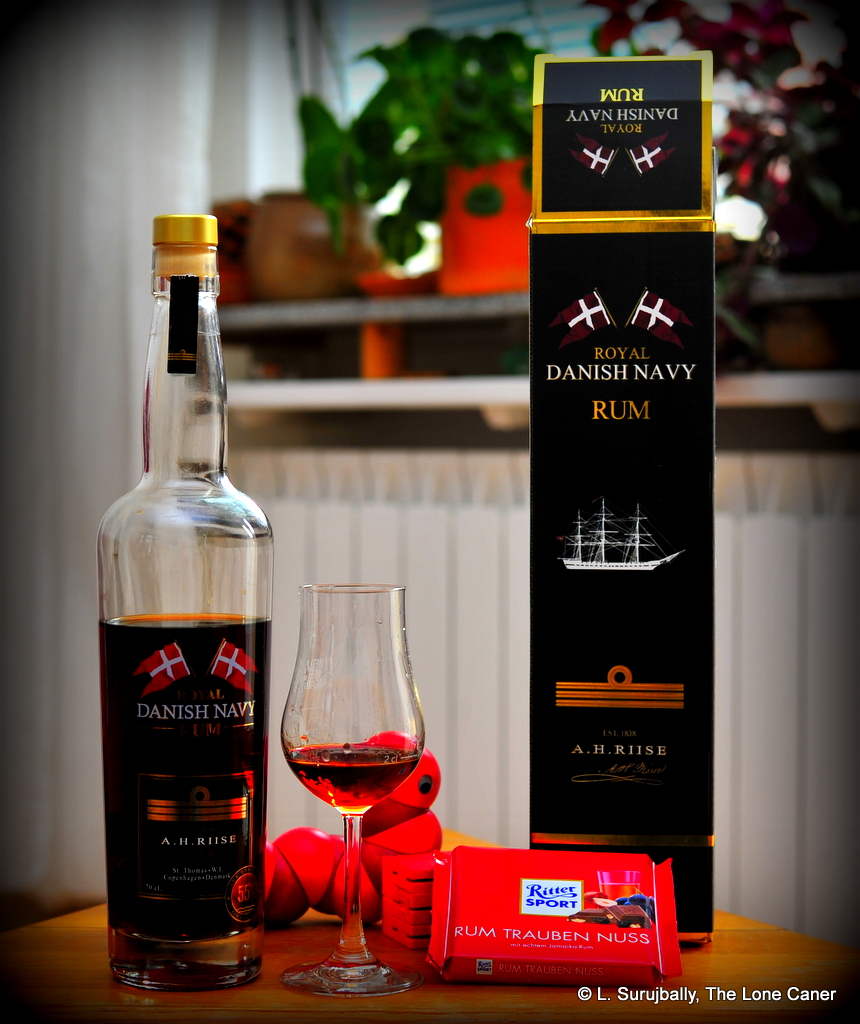 My mission, should I chose to accept it, is to get hammered on this crap. I drank it so you don’t have to.

I can’t imagine what was going through AH Riise’s corporate minds when they made this ersatz faux-Navy-Rum wannabe, but I should point out that the few rum guys I know from Denmark think it’s something of an insult to the spirit.  It’s a sweet sugary Nicolas Sparks-level saccharine mess, with a grudging nod given to navy standards by beefing it up some.  Unless you’re masochistically into multiple insulin shots, my advice is to smell it and immediately put it back in its box…and then hand it over to all those guys to whom you already presented the Coruba, Whaler’s, the Pyrat and the Kraken. It’s in good company there.

The Royal Danish Navy rum, bottled at 55% is supposedly made according to the same recipe as old AH (see below) developed over a hundred years ago, and then sold to Naval vessels who passed by. It is not a really aged rum – rums “up to” 20 years old comprise the blend, always a warning sign — and which in turn derive from molasses, and distilled in a pot still.  According to the product notes on the website, it is neither chill-filtered or coloured (but still we wonders, precious, we wonders….).  And that’s about all I can find online and in my scanty library, aside from the company bio, which is below. 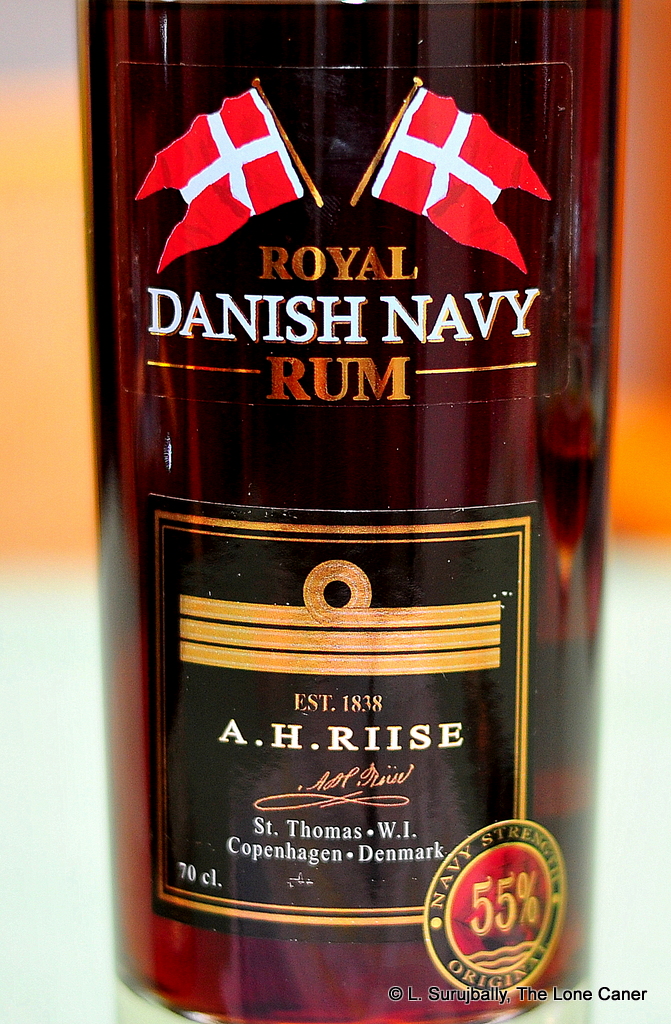 The nose started out badly for me, and went downhill from there.  The rum presented well, mind you — nice and dark, looked cool in the glass…but that nose. Ugh. Darkly sweet, redolent of peaches, dark sugar, prunes, more dark sugar, some chopped fruits, even more dark sugar. It was, in a nutshell, cloying. Even a few background notes of soggy, rotting wood and cooking sherry, black berries and jam couldn’t elevate the smell of this thing.  To be fair, I note that some soy sauce and green olives made an appearance after a bit (a long bit), with perhaps a flowery note coming through…but what good did that do? And, 55%?  Where was the power and intensity this should have brought to the table?

Redemption was not to be found when tasting it, alas, even though I often found in the past that nose and palate can be strikingly different…but not here. The rum was hot, thick, creamy, full bodied, syrupy, oversweet, cloying, bubble-gum-like, sticky, vanilla-laden.  It was a dentist’s wet dream, a full out cavity attack, with all the strength and all potential flavours beaten into dull defeat and abject submission. What other flavours? Vanilla, more peaches, some molasses, a shade of caramel…and some grudging citrus that comes out when water is added.  A short, lackluster finish, warm, tasting of treacle and blackberry jam, paradoxically thick and weak at the same time.

Perhaps it was made for innocent tourists hopping off a cruise ship rather than to attain a high standard in its own right, but there’s all sorts of things wrong with the rum. It is almost drowned in excess sugar, from which the 55% can’t save it, it displays little evidence of the complexity that ageing should have imparted, and I am convinced that some guy in the blending department kinda-sorta accidentally-on-purpose dropped his Mama’s fruit basket into the vat.  The “rum bio” on the site is shoddy, and the reality of what it is versus how it’s hawked throws the entire rum into question. I am not going to say outright that the marketing plug on their website is out and out false – but it is misleading to say the least, especially given that Johnny Drejer has already estimated 96 g/L of sugar in it (additives? what additives?).

So, in fine, the AH Riise Navy 55% is not a rum to buy. It wastes your money and your time, unless you are into liqueurs or want to cook with it, and I can’t even imagine what kind of cocktail you could use it in. I’m a lover of Navy rums and vibrant Jamaican/Guyanese profiles – hell, I enjoy strong inexpensive mixers like Pusser’s, the 151s, Young’s Old Sam, Woods 100, Cabot Tower 100 and many others. So I’ve had and enjoyed cheap and not-so-cheap navy rums that had size, staying power, massiveness and strength…but this iteration? It has a nose of no attraction, and struggles with a flaccid palate reminiscent of a coked out John Holmes in his last days.  It is, to be brutally frank, a limp dick. 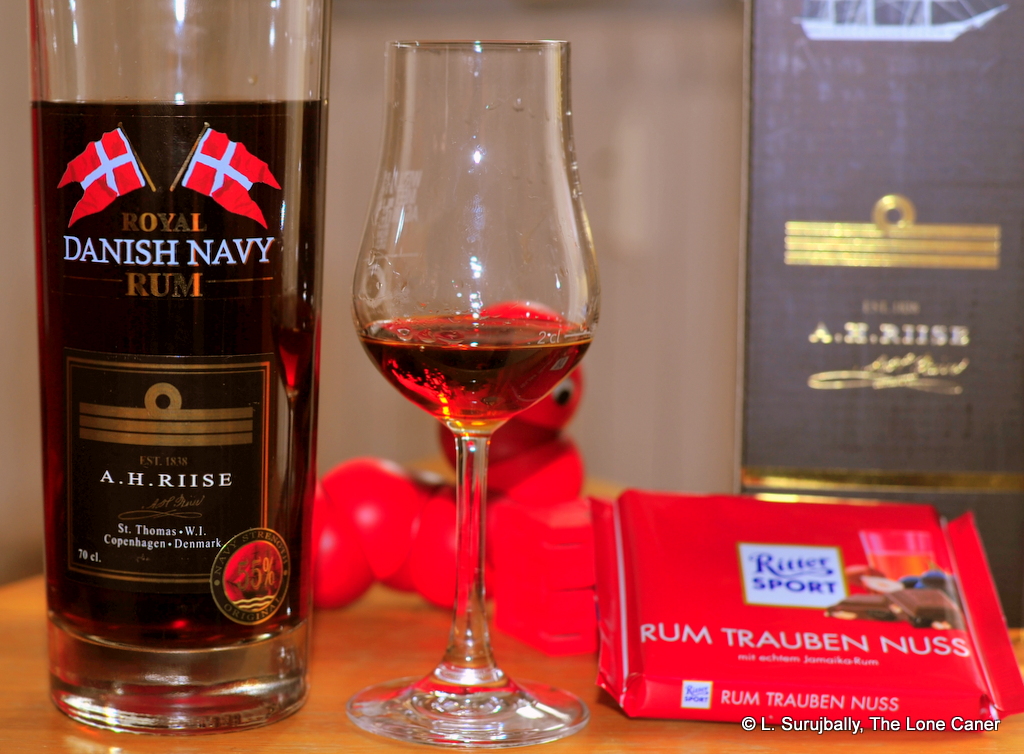 We haven’t seen this company before, so let me delve into the usual history..

First of all, it should be noted that Denmark did indeed have Caribbean colonies back in the day – St. John, St. Croix and St. Thomas, which are now the US Virgin Islands.  The good ole US of A bought them for $25 million in gold back in 1917.  Part of the reason for the sale was the high cost of sugar production after slavery was abolished following the 1848 Danish Revolution — certainly mismanagement of the local economy didn’t help. The Skeoch family over in St. Croix and their Diamond Rum Company was doing okay (they would go on to create the Cruzan brand after the repeal of the Volstead Act), but St. Thomas and St. John were in dire straits.

Albert Heinrich Riise, a Danish pharmacist who got a Royal Decree allowing him to open a pharmacy on Charlotte Amallie on St. Thomas in 1838, had a thing for botany and pharmaceuticals (not the recreational kind), and early on created the Riise’s Bay Rum, which was not a rum at all, but a cologne, or after-shave or hair oil, with enough alcohol content to be used as a substitute by those so inclined.  This proved to be so popular that by the 1880s (when Riise’s son-in-law had taken over) rums were part of the stable of the company – one even won a medal in 1893. In 1913, the Riise holdings were sold to Olaf Poulsen, a Copenhagen pharmacist, and in 1928 to the Paiewonsky-Cassinelli family, who own the company today. They are  retailers and distributors more than rum makers and their website makes no mention of this sideline of their company at all (it’s on a separate website dedicated to just the rums). That alone might explain something.

Several other A.H. Riise rums exist.  Maybe one day I’ll try them all to see how much they differ from this one. Hopefully a lot.