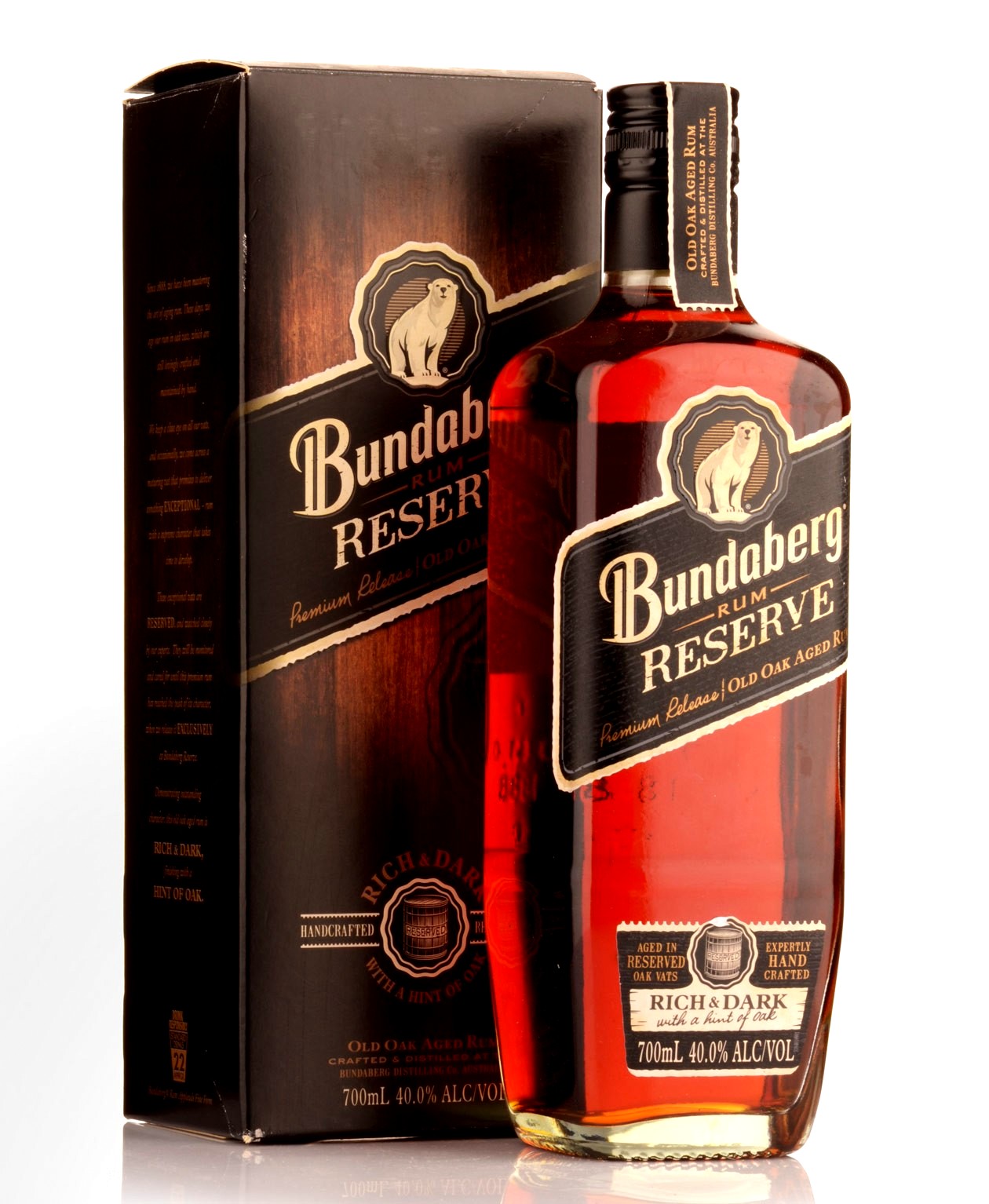 I have a feeling I’m going to catch some flak for this review, of a rum I know many think is the bastard offspring of a low quality formaldehyde mixed with a crazy paint stripper and the stinking armpit of a sweaty canecutter at noon.  Short version – miles better than its low-bred coz from the sticks.

Full disclosure: I absolutely detested the original low end Bundaberg Rum, and even Aussies with whom I’ve occasionally been in contact seem to despise the rum most indelibly linked with their land. It was a raw, nasty, foul tasting morals charge, a rum so way off base it was in Mongolia, with a taste so different you found yourself clutching what remained of your tonsils and crying like a baby after merely one sip. My squaddie the Bear probably still as that original bottle from two years ago in his pantry, never opened or sampled again. Stefan Hartvingson, of that excellent website tastersguide, thought that even the Reserve, a step or two up, was not as good as his wife’s nail polish remover.

Therefore it was with some trepidation that I forked out forty bucks for the Bundaberg Reserve when I saw it. You might reasonably ask why I bothered. Well, partly it was curiosity, and partly it was so I could give it a shot (so to speak) and see what it was all about. It couldn’t really be as bad as the entry level, could it? And how could I call myself a reviewer of rums if all I did was go after what everyone else said was good and never went off the reservation myself…where’s the intellectual honesty in that?

Bundie has been around since 1888 when several small operations in Queensland combined to form the Bundaberg Distilling Company, which has been in operation (more or less) ever since – fires caused a cessation in production in 1907 to 1914, and again in 1936 to 1939. The Polar Bear mascot was introduced in the 1960s to signify Bundie’s ability to ward off the coldest chill, and Diageo bought the entire concern in 2000.

With respect to the 40% rum itself here is not much real information about the Reserve. According to the company website, it’s a blend taken from vats which seem to be maturing very nicely, and are reserved for some ageing in oaken casks and subsequent bottling and marketing as something more high end.  Supposedly released in June 2009, only 5,000 bottles. There’s no age statement to be found anywhere, not any indication of how long the blend remains in the oak casks – from my own observation and experience, I’d hazard a guess it’s around five to seven years. The bottle is the standard slope- shouldered, simply-labelled bottle. Tinfoil cap…utilitarian but effective, so no great fancy cork nonsense for this baby.

There  was an earthy, musty nose of truffles and damp earth when fresh rain hits it, to start one off – immediately you get the picture: this is not the normal rum one is used to, all caramels and burnt sugar.  Behind that initial scent I got pineapple, some fleshy fruits, with a faint nuttiness coiling around it all, and the expected brown sugar notes attending smartly.  Much better. The cloying turpentine and rotting fruit assault of the Bundie I had tried previously was dialled down so far as to make it a mild characteristic rather than the whole show of that variation. For something touted a ‘Reserve’ – usually seen as a cut above the ordinary – the arrival was a bit sharp and peppery, yet I got a clear “rum” taste of sugars and phenols that wasn’t bad – the weird thing is that the musty taste of the nose was nowhere in evidence.  Certainly there’s a piquancy to the Reserve – I couldn’t fault it too much for that, however, since the smoothness of the product was rather pleasant and not raw and raging as I had half-feared.  The finish was utterly unexceptional – short, sweet and spicy, and I can’t say I cared much for that – the taste was the best thing about this entry into the Bundie stable.

Bundaberg rum may be considered Australia’s signature spirit, but it’s a queer thing that Aussies themselves don’t seem to care much for it, unless one counts yobbos whose aggressive demeanour after a fair night’s enthusiastic duelling with the spirit has caused the company much embarrassment. Maybe most antipodean dwellers think they’re too good for it, or some such – it may be held in the sort of genteel contempt that King of Diamonds is in Guyana.

But truth to tell, this ain’t all bad, guys. It can be mixed or taken with water, or even (for those who really like something original) taken by itself, and here I should note that a certain smoky character emerges with a cola, and I really enjoyed that. Sometimes I come to a rum with low expectations and get surprised…this is one of those times. I came to sneer and stayed to write of my tolerable appreciation (and that was not a lightly given accolade, believe me). Bundaberg Rum is not the chippest kid on the block, and it won’t convince anyone who hates the other varieties to give it a try…but it’s better than the bad word of mouth has it. Not by an enormous margin…just enough that you notice it.

Holy antipodean molasses, Batman: what the hell is this? Years from now, old farts will be discussing their first great love or hate of rum, and this one will surely make the short list. You either embrace this vile sipper or despise it for its difference,  but you’ll never be indifferent, that’s for sure.

Full of hope and expectations, Keenan and I traded rums over the table yesterday – in his direction went the El Dorado 21 year old (I had really wanted him to sample it since his snoot is more highly attuned to quality than my more pedestrian schnoz), and in mine went the Bundie (plus a few others, in case you’re thinking that the exchange was not an equal one).  Ever since we had had this at Bauer’s place some months ago when dodging his dog and scarfing pizza, I had wanted to write a review of this antipodal hooch, and to refresh my memory as to whether it was truly as bad a sipper as I recall.  Or had I been too tipsy and despoiled by the whisky that night to have a clean palate?

The answer? Yes, no and no.

Bundaberg Rum is made in Bundaberg, Southern Queensland, Australia, and is something of a cult favourite down under – it’s said this is what coke and weekends were invented for. “Bundie’ as it’s called there, is practically a cultural institution and supposedly the most popular rum in Australia.  I first heard of this 37% underproof when I read Wilbur Smith’s Hungry as the Sea (“Listen to me, you Bundaberg swilling galah” says the hero at one point to an Aussie engineer) and have kept it in the back of my mind ever since. It has been made since 1888 when local sugar plantations were trying to figure out what to do with their leftover molasses. With some interruptions, the rum has been in production ever since.  In 1961 the polar bear was added to the labelling as a mascot to imply how well the rum could ward off the coldest chill. The Bundie that makes it over here is not the more expensive Reserve, Red or Overproof, but just the standard low-end stuff, coming off a wash and then a pot still. Even so, I think it costs in the $40-$50 range (which may be transport costs factored in).

One has to be clear that this is not meant to be a sipping rum.  It’s absolutely meant to be mixed (preferably with ginger beer to create a highball known as the “Dark and Stormy”), and every review I’ve read says so, though one Aussie who commented here disputed the point and suggested it was more commonly mixed with coke.  I agree. This is a cocktail base and not something to tempt the nose and the palate to indulgent, leisurely sips.

The problem was, I approached like I had all the others. Sniff, a sip neat and another one over ice.  And I shuddered and just about knocked Keenan out of his chair in my haste to reach the coke. Keenan himself was blanching. “Turpentine,” he managed to squeak as he reached for the smelling salts.

Christ.  This is not a rum.  This is a tequila masquerading as a rum. It smells different from any rum I’ve ever tasted, harsher and cloyingly musky-salt-sweet (the very thing I hate about tequila) and the taste is sharp, violent on the tongue and is redolent of methylated spirits, match sulphur and new paint (I exaggerate for effect…but not by much).  There’s no oak, no caramel sweetness, just hurt.  As a sipper this may be the single vilest drink I’ve had since I made the mistake of trying my Uncle Ronald’s DDL five year old neat and lost my voice and sight for a fortnight (admittedly, some suggested it was an improvement and rushed to buy a few extra bottles). It certainly will warm the cockles of your tum, but my advice is to use it for what it was meant for: comforting exiled Aussies, mixing it with coke at least 3:1 in favour of the coke and appreciating that here is something that really is different. Keenan’s attitude was distinctly unflattering: “I’d rather eat a curried dingo sh*t than try that straight again.”

It may appeal to some who like drinking a rum that is off the reservation (and is as distant from the Caribbean caramel and fruit taste as it’s possible to get), and maybe with ginger beer (or coke) it really does lift your socks off.  All I can say is that it doesn’t work for me, and after I helped The Bear back to his feet, we “ketch sum sense” and moved back to the safer ground of the West Indian nectars, rather than indulging further armchair sojourns to the south.