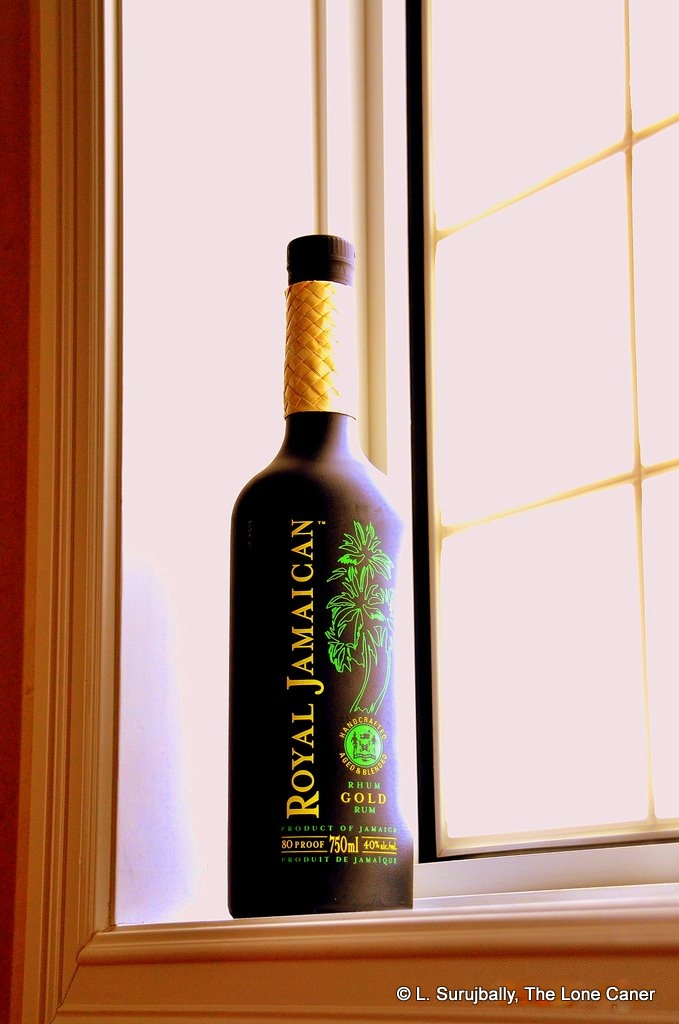 Appleton (or J. Wray & Nephew, if you will) so thoroughly dominates the rums of Jamaica, that it feels somehow wrong to see a bottle marked Jamaican Rum without the moniker of that famed distiller emblazoned on it. Now, not having been to Jamaica for many years (and having paid more attention to a winsome lass named Renu and markedly less to the available rums at the time), I’m a little off on exactly how many exported Jamaican rums there actually are.  Still, I think it’s safe to say there aren’t many from actual estates over and beyond Appleton: Longpond, Monymusk, Worthy Park and a few others which make bulk rum for export and onward sale to independents and merchant bottlers, not real estate rums (see “other notes” below).

The bottle states that it is made by Royal Jamaican Rums; some trolling around shows that it is actually distilled in the Monymusk distillery located in the south central parish of St Catherine’s. Monymusk Distillery (and Clarendon) is owned by National Rums of Jamaica, a consortium formed for historical purposes too complex to go into here, and NRJ itself is 1/3 owned by – each – DDL of Guyana, Maison Ferrand (Plantation) of France and the Jamaican state-owned vehicle of the National Sugar Company.  There are remarks on it being handcrafted, hand drawn and bottled, and meticulously blended which I simply pass over as advertising hoopla.  However, what I can’t overlook is the appearance: a stark black bottle, bright coloured printing on it (it’s eye catching, I’ll admit: you see this on a shelf, you will come back for a second look, guaranteed), and a straw braided wrapping around the neck.  Pretty original.  You won’t mistake it for an Appleton, no doubt about that.

That originality of appearance may be the second-best thing about it, if you’re keeping your eye out for some unique new product undiscovered and unappreciated by the hoi-polloi. The rum poured out as an amber gold liquid of middling legs (nothing special there) – and I thought  the nose deserved a special mention. I sniffed soft floral hints right away, and hardly any sting; some medicinal phenol-like scents were sensed and then drifted away almost before I realized it, and a creamy chocolate smell wound around with grape sat at the core of it – it wasn’t quite as obvious as the Legendario was (the muscatel in there kind of boxed you on the hooter right away), and I appreciated the subtlety more. I need hardly mention that after opening up in the glass, our old standby aromas of caramel and burnt sugar deigned to make an appearance, though I doubt most people would want to wait that long.

The taste on the palate did not, in my opinion, live up to the hype of either bottle or nose.  Some people think tasting should be the sole criteria, and I’ve gotten no end of grief from friends who believe I’m insane to award (or deduct) points for the look of a bottle, or the effort expended in smelling  what is at its most basic level, a drink to be drunk.  And that’s perfectly fine.  It’s just not fine for me, and I take enjoyment from all aspects of the experience – this is why I give more points to a well designed presentation than just an average blah bottle, and take my time with the nose of even a cheap product. However, here, the taste was dry and astringent, and the oak in which had been matured came through with surprising fierceness. It was arid and a little bitter, with a raw alcohol bite which gave the lie to that excellent nose I had enjoyed.  And briny, with a weird biscuit undertone that made me wonder whether some wag had salted some hardtack into the maturing bourbon casks. And yet, a second taste suggested that a toffee or butterscotch flavour was trying to emerge with all the shyness of a girl showing her date the prom dress when he comes to pick her up.  I was not impressed, is all – the arrival of the rum had started well, but didn’t even get to the middle stretch before faltering.  A shame.  And I sighed in disappointment as I felt the finish: a short acid burn, not kind to my throat, with zero redeeming features about it.

I just didn’t get it, and still don’t now.  Here was a rum with obvious attempts at pedigree which had a taste that simply failed. As a mixer it would cut it, sure, and I suspect that maybe that was because it was a blend of rums of maybe one to three years old; it was labelled on the makers site as being meticulously blended in small batches, and all this was to the good.  You’d just think that if a rum was going to take on the Goliath of the Jamaican industry, it would have had more overall quality, some more effort put in beyond the admittedly superior nose.  Without a decent taste, it lowers itself to being another low-end mixer, slightly redeemed by better than average packaging and a good smell.  Alas, drinking any rum is more than these things – it’s an overall aesthetic experience, and in spite of its impressive beginnings, at end it’s just a damned Anancy story.

There’s an old South African joke I used to hear when I lived in that neck of the woods, about the perfect mouse trap designed by (who else?) Van der Merwe; his first iteration had a razor blade with a piece of cheese on one side: his stroke of genius was to assume that the mouse would lean over the blade to get the cheese on the other side and cut its own throat.  The idea that the mouse could go around the trap never seemed to occur to Van. When this was pointed out to the baas, he went away and designed the perfected version – razor blade only, no cheese.  How did it work?  The puzzled rodent would go lower and lower, and cut its own throat while asking, “Where’s the friggin’ cheese?”  This rum reminds me a little of that joke: I turn it around and around, drink sip after sip, and keep wondering where the hell the good stuff is, the uppercut that would take on Appleton.  And then it’s gone and I finished it and I realize there just ain’t any, and it was a trap all along.