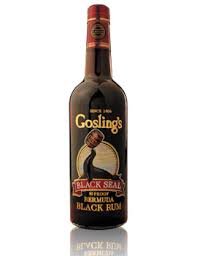 Gosling’s hails from Bermuda: like Appleton’s, Mount Gay or el Dorado, it is closely identified with its island of origin and is, aside from tourism, a mainstay of Bermuda’s economy and probably its main export. The Gosling enterprise has been in business on Bermuda since 1806, when instead of landing in Virginia, the founder went ashore in St. George’s and set up shop. The Dark Seal is their flagship product and goes hand in glove with their trademarked (yes, they have the rights to the name) cocktail “The Dark ‘n’ Stormy.”  Note that the rum was not named for the sea animal, but for the black sealing wax with which the first bottles were closed. For some reason, the company does not feel that you need to know how old it is, though their website entry does helpfully note that it is aged in charred American oak casks, and is a blend of pot and column still distillates.