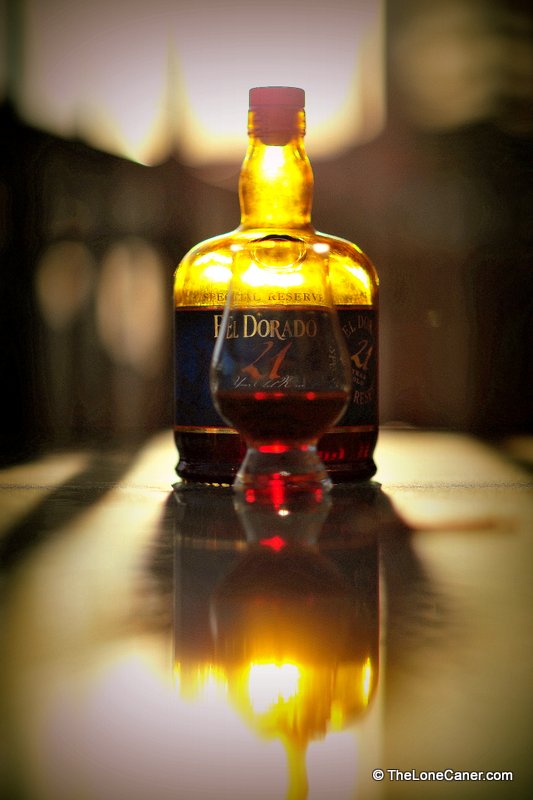 It seems to be a cruel irony that I always find the rums I desperately want to buy and take a taste of when (a) my frugal better half is casting baleful glares in my direction,  (b) my friend The Bear is unavailable to assist in the sampling and (c) cash is short…or at least, pay day is nowhere in sight, which amounts to the same thing.  All three were in evidence this Friday, when, for reasons we shall not get into here, I was in the Calgary Airport liquor store.  Now why they would have a store in a place that does not allow you to bring the good stuff aboard except in checked luggage (at which every West Indian I ever met would blanch, shudder and mutter that “dem peepl nah gat sens…is where else me go drink it?”) escapes me, but I ended up snagging one of the three bottles I was after: the Demerara Distilleries El Dorado Special Reserve 21 Year Old.

For those unfortunate souls not from the West Indies, or the even sadder ones who know nothing about Guyana, let it be said that two mighty local spirits outfits vie for control of the local and export market: Banks DIH (a blender and beer maker) and Demerara Distilleries (a true distillery).  There isn’t a Guyanese alive, of this I am convinced, who does not recall the sniff of fermenting sugar as he passes Diamond Estate to or from the airport.  This is where DDL has its base of operations, and this is where they blend the elite little package that I prepared to sample some thousands of miles away.

For a rum costing close to a hundred, the packaging is surprisingly cheap printed thin cardboard, but okay.  It’s what was within that I was after.  DDL matures this baby in used oak whisky and bourbon barrels, and the aroma of the cork bears this out.  The aroma was a pungent mix of burnt sugar, spices, soft and thick, chopped fruit in a black cake, butterscotch and caramel, molasses and smoke and I dunno…perhaps some oak, all blended very smoothly and almost inseparably in there.  A first taste neat and then another on the rocks made it clear that DDL put some effort into making this a somewhat dry rum (more so than the 15 year old), but it developed on the palate very nicely, and I think The Bear would agree that it was enhanced by the whiskey notes, the same way he really appreciated the Renegade 1991.  The sheer amount of tastes coming through was astounding: chocolate, coffee, mocha, truffles, raisins, dates,  black currants and blackberries, anise, licorice, molasses…each flavour chased its way genteelly up one side of my palate and down the other.

Good stuff this. At 40% it is like caramel velvet going down, and it’s one of those like the English Harbour 25, that I would not tamper with, it’s that good…no coke for this baby.  It can’t class with the English Harbour all the way (at half the price, that would have been practically a miracle), but I’ll tell you this…it gives similar price point rums like the Appleton Master Blender’s Legacy a run for its money. It may disappoint on a second tasting, but thus far, for me, it’s one of the better neat rums I’ve ever tasted, and it wasn’t wasted money.  Too bad the Club was not meeting this week…I would have loved to bring it along for an introduction.

Update: three weeks later the Bear and I sampled this together for my second go-around on the bottle.  While his tongue had already been desensitized by the English Harbour Five we’d been sipping for the previous half hour (he agrees this is one of the great SDRs around), he was clean-bowled by the sheer quality of this 21-year. Unlike me he took no umbrage at the cheap packing, since, in his view, it does not add to the price and what you get is what you pay for. An interesting point.  But after he wiped his misty eyes dry, he said that this was such a smooth, well-balanced rum that it might even be better than the EH-25. Looks like I’m not the only one to think this way.