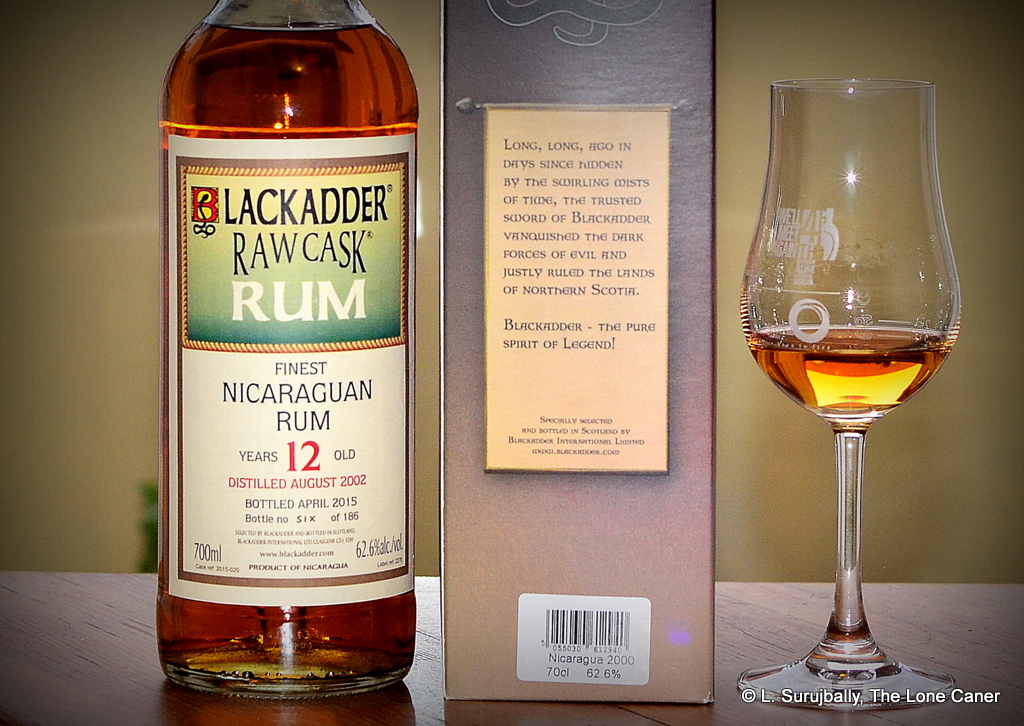 It’s been quite some time since I’ve tried a Nicaraguan rum. That’s partly because I was unenthusiastic (even indifferent) to the more recent Flor de Caña range of rums where the age statement, through a miraculous stroke of legerdemain, suddenly disappeared; and having gone through a goodly part of their lineup once, I had other interests (and rums) with which to occupy my reviewing time.  Still, just as the islanders have their variations taken to new extremes by independent bottlers, so does Nicaragua, and when I got the chance to acquire not only this rum but two aged full proof versions from the Compagnie, I jumped back into the fray.  Maybe it was time to see how the country’s hooch had developed since the last time.

Blackadder is a Scottish indie, known more for whiskies than rums – like G&M and others from that neck of the woods (if less well known than the other bigger guns out there), rum is a sideline for them, an obiter dictum, if you will. They indulge themselves — as with whiskies — in single cask bottlings without additives or filtration of any kind, which they have trademarked as a “Raw Cask” in order to demonstrate how even sediment from the barrel gets transferred to the bottle so as to impart the maximum amount of barrel flavour.  Yeah, well, ok. This particular bottling came through the still in August 2002 and was bottled in April 2015, so a smidgen over 12 years old…and issued at a massive 62.6%, and that’s damned appealing, if only to get us past the milquetoast of the standard strength Flors that are much better known. 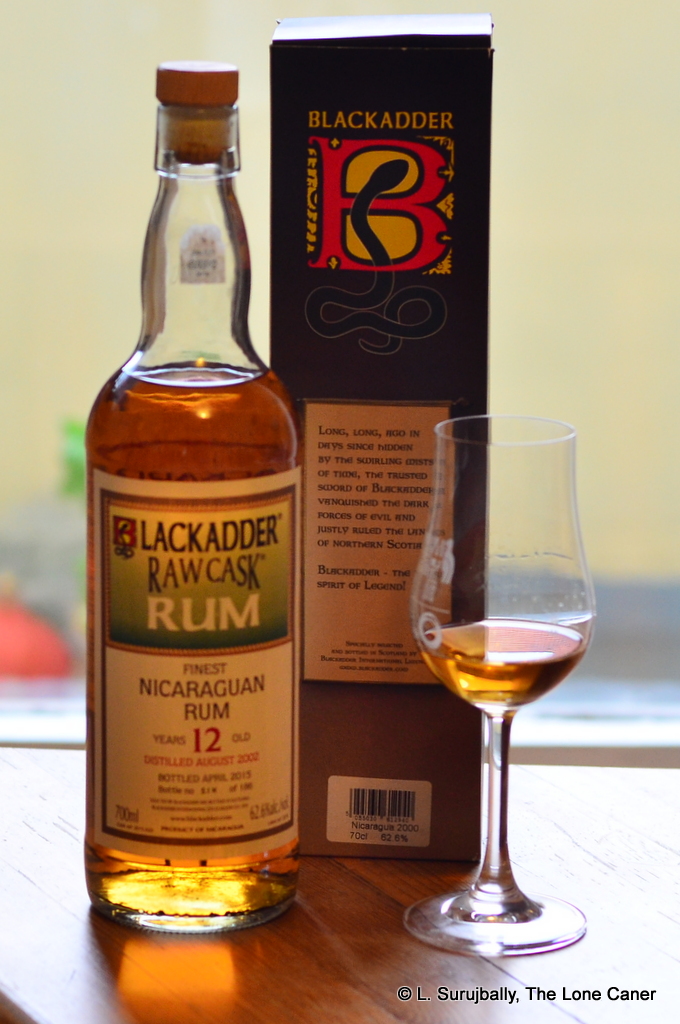 Nicaraguan rums are very similar to what you might get if you casually flung together a Guyanese and Jamaican without worrying too much about the provenance or age of either, but over and beyond that they have a certain profile of their own, however much they are usually dampened down.  They lack the distinctiveness of either of those aforementioned rums types, for example, both of which you’d likely know blind….not necessarily the case with the Nic I’m looking at here).

Anyway, what of the rum?   Well, it certainly came hurtling out of the bottle in a nose of raw aggression, so I let it rest for a while to avoid serious injury.  Once it calmed down, the initial scents were of vanilla and faint aromatic tobacco, quite well balanced for that strength, and remarkable for a lack of burn usually attendant from such a high proofage.  The vanilla gave way to honey and marshmallows, some flowers, toffee, sugar water and faint nutmeg, yet overall I came away expecting more…there was a sort of one-note directness here that I didn’t care for, and the vanilla held the high ground too assertively (and for too long) to allow for the full development of subtler flavours I was expecting.

Palate wise, this odd simplicity continued.  It was quite creamy and assertive under the heated taste, of course (“chewy” is not a word I use often, but is perfectly applicable here).  What fruit flavours there continued to keep their distance – one could sense them without actually coming to grips with what they were.  With water, brine, olives, caramel and ice cream were evident, with vanilla again taking something of a front seat (but less than the nose), and the honey was retained, providing that bed of softness upon which lighter florals were laid. On the whole, it was pleasant enough, just somewhat…dour,  guess.  Hardbitten. A bit rough.  It never really developed into something exceptional, and even the finish – sharper, longer and lighter than a Mombacho, or the CDI full proofs – did little to enhance that, simply presenting honey, light florals for a while, before dissipating into a fade that in no way broke new ground.

Overall, there’s something stern and dark and uncompromising about the rum, and for one of the few times drinking cask strength products, I believe that here the thing should have been brought down to a lesser proof (that’s just my opinion, though). With some less starkly elemental rums from Central America there is a softness to them, something redolent of the tropics, a sort of warm voluptuousness which this one does not have. The imagery is more of dark, hard, storm swept cliffs drenched in cold seaspray, than lush tropical vegetation.  I may be wrong but I get the impression it was aged in Europe, not Nicaragua, and that gives it a kind of roughness and power which not everyone will appreciate – it’s made, one thinks, by and for whisky aficionados.  That’s not enough to make it a bad rum by any stretch, but it does imply that one should be careful to understand one’s preferences, before going out to buy it simply because it’s a cask strength rum from a country where easy going profiles are more the norm.  That it’s pure and unmessed with and a true expression of its country is not in question – whether that all works and comes together harmoniously for a drinker, however, is another matter altogether.  In this case it might be all about what other spirits one likes.

Distillery unknown though I suspect it’s a Flor cask.  It has points of similarity to the 18 year old I tried some years ago, and to some extent the “21” 15 year old from that company.