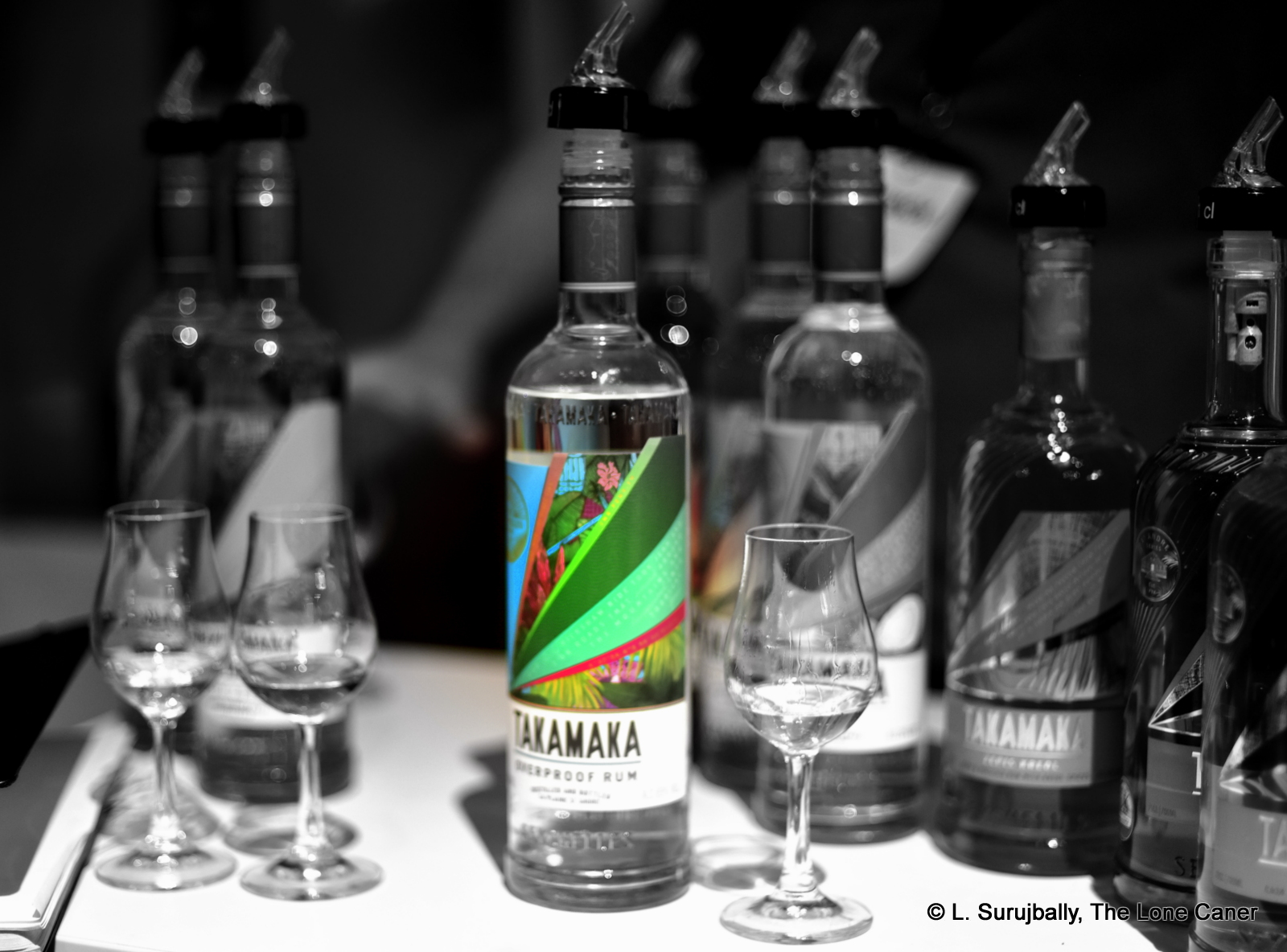 As I remarked in the review of the Damoiseau 2009, there is an emergent trend for agricole rhum makers to make their white rhums stronger. This boosts flavours and intensity and makes for a drink or a mix that has the kick of a spavined mule, and because the rum is unaged, you are getting hit with all those enormous sweet grassy and herbal agricole-style tastes. That not only wakes up a Ti-Punch (or anything else you chose to add it to) but supercharges it.

To some extent I think that this trend is meant to capitalise on the success of the high ester Jamaicans like the Rum Fire, Rum Bar, Wray & Nephew Overproof, together with the realisation by various rum makers (who previously just went with lighter whites) that such unaged rums – whether from cane juice or molasses – can be both stronger than the standard and way more exciting…and still people would buy them.

One such rum comes from the brand of Takamaka Bay out of the Indian Ocean islands of the Seychelles, which is a distillery founded in 2002 (it’s actually called Trois Frères Distillery), and from the beginning made rums from both cane juice and molasses. Their initial lineup had a brawling cane juice blanc which was in fact stronger than others available at the time (it was 72% ABV), and which for some reason they discontinued by the early 2010s.  They replaced it with this one, three proof points lower and fully from molasses, for reasons that are obscure and may have to do with their major rebranding push around 2013-2014. It is part of their low end “Seychelles Series” of rums which includes infused, spiced and tinkered-with rums for the bar scene. 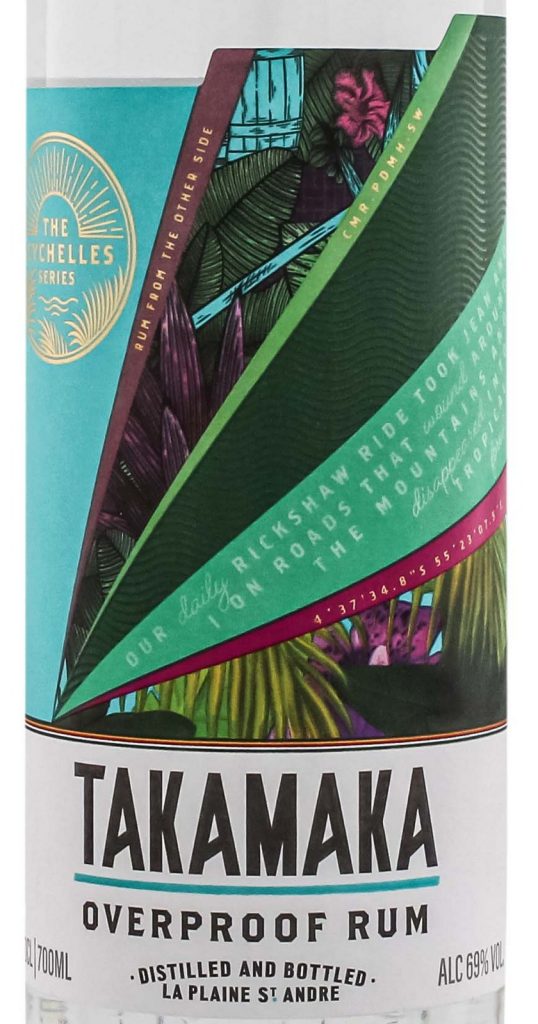 Now you would think that the producers of an overproof Wray-slaying-wannabe, which of course this aspires to be, would make every effort to ensure its product is packed with flavours of a fruit and candy shop and if it felt like being bellicose, pack itself with a nose the envy of a rutting troglodyte’s mouldy jockstrap. I stand here in front of you saying, with some surprise, that this just isn’t the case. The nose starts off okay, quite spicy, with notes of white chocolate, almonds, soy milk, creamy unsweetened yoghurt.  Then it adds a bit of grass and cumin, a shaving of zest from a lime or two. A pear, maybe two, some papaya. But that’s about it. The rum is so peculiarly faint it’s like it would need to stand twice in the same place to make a shadow.  This is an overproof? It’s more like slightly flavoured alcoholic water, and I say that with genuine regret.

Regret or not, this light faintness dominates the palate as well. It feels quite delicate (though always spicy – the effects of that 69% do not entirely vanish), yet somehow feels less, tastes less, smells less, not just in terms of intensity, or power to originate tectonic plate movement in your face – but in the aggregate sensation. There’s so little coming at you. You get alcohol, vanilla, cream, pears, swank, and that’s if you’re lucky. A touch of lemon zest. Maybe a flirt of licorice, some salt, a light cream cheese on wonder bread. And that’s all. The finish tries to redeem that by being long, dry, coughing up notes of light fruits (pears, Thai mangoes, white grapes), but alas, not enough to save it. For an overproof at this strength, we definitely have a failure to communicate.

Whatever the motivations or economic rationales were for switching the original overproof (which I rated 84 points) from cane juice to molasses, dropping the proof and simplifying the blend, my personal opinion is that Trois Frères might want to rethink that, and maybe even re-tinker. The rum is a disappointment for fans of the company which has other expressions of lesser proof that are really quite good and sells bulk rum abroad which is sometimes even better. It lacks serious tastes for something so strong, it provides no oomph to enthuse the barkeeps and mixologists who are looking for original expressions to enhance their creations, and no incentive for casual drinkers who’re looking for a unique profile. I’m no doomsayer, but I do believe that if something isn’t done to up this rum’s game, it might just arrive DOA and expire in obscurity…and that’s a shame, not least because I didn’t come here to write obituaries.

Overproof rums started out as killer cocktail ingredients, meant to boost anything they were put into by, I dunno, a lot. For many years they were pretty much the bruisers of the barflies — low-life, lightly-aged mixers (or occasionally unaged whites) which only islanders drank neat, largely because they had the least amount of time to waste getting hammered.  Still, as time passed and cask strength rums became more fashionable (and appreciated), the gap between the strength of a cool aged casker and an overproof shrank, to the point where a 75% bottling of a “regular” rum that’s not labelled as an overproof is not out of the realms of possibility – I know several that stop just a bit short of that.

One of the old style overproofs is this rum from the Takamaka Bay rum company located on Mahe, the main island of the 115-island archipelago comprising the Seychelles, in the Indian Ocean off East Africa. The company is of relatively recent vintage, being formed in 2002 by the d’Offay brothers, Richard and Bernard d’Offay, and sourcing sugar cane from around the island – they are, according to their website’s blog, one of the few distilleries in the world that make rum from both juice and molasses.  They have two copper pot stills and a columnnar one, and this white rum, now discontinued and replaced with the 69 Rhum Blanc, is an unaged, unfiltered column still distillate with possibly a touch of high ester rum from the pot still. I’ve read on a Czech site that the rum is triple distilled from cane juice and then diluted, which was later confirmed by Bernard d’Offay.

Palate – Fruit juice poured into my glass, clean and light.  There’s the crispness of green apples, cane juice and red cashews, melding well with the tart creamy sweetness of ginips and soursop.  Herbs remained – parsley, dill and mint. It was hot and delicately sweet, presenting with force, yet it also reminded me somewhat of a tequila, what with a background of brine and olives and a faint oily texture on the tongue

Thoughts – It’s really quite a good rum, and I’m sorry to see it’s no longer being made. Before I got a response from Takamaka Bay, I thought the column still produced this from cane juice spirit (this proved to be the case). It’s a mixer for sure, though anyone who finds it and tries it neat won’t be entirely disappointed.  It’s a fiery, flavourful white which may now no longer be made, but lives on in its slightly lesser-proofed brother…which I have a feeling I’ll be looking for quite soon.