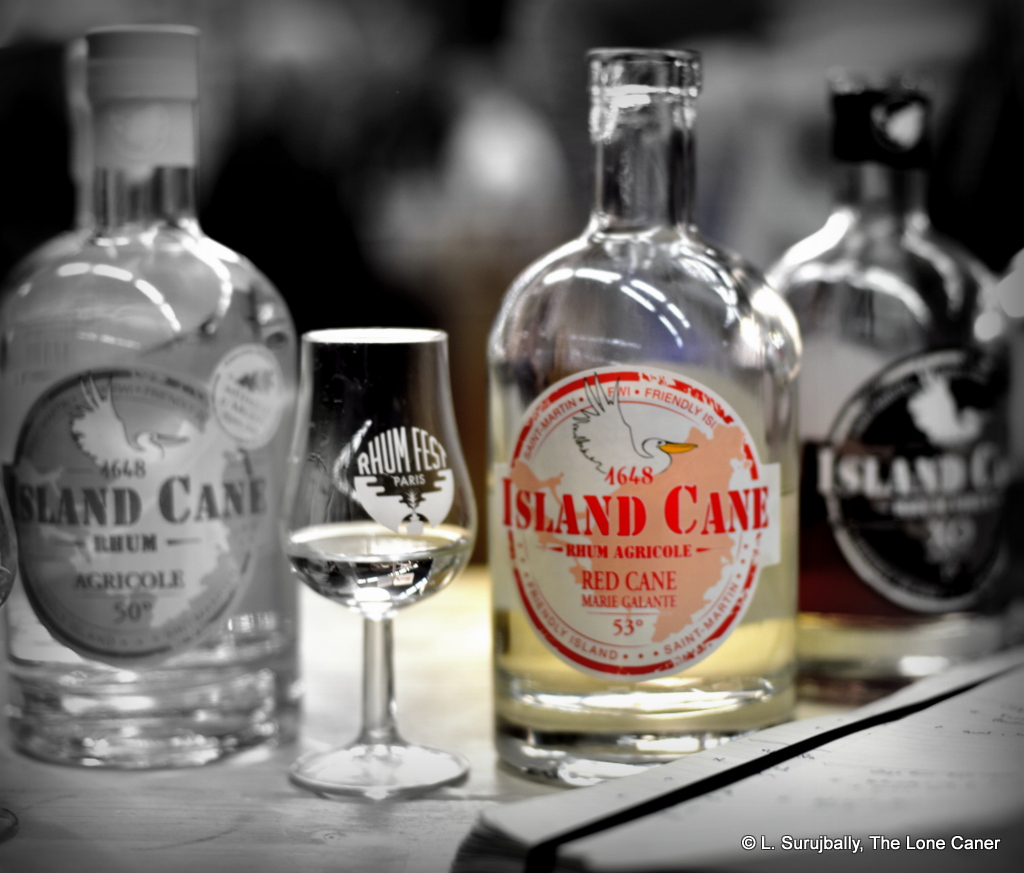 It’s when you sniff this understated and really quite excellent agricole from Marie Galante that you gain some sense of how well made both it and the green labelled “standard” blanc 50º are.  The Green Label — my term, not theirs — was good and I really liked it, but this one was a few degrees stronger and a few degrees better and makes a good case for both the utilization of specific cane varietals and a single source of origin. 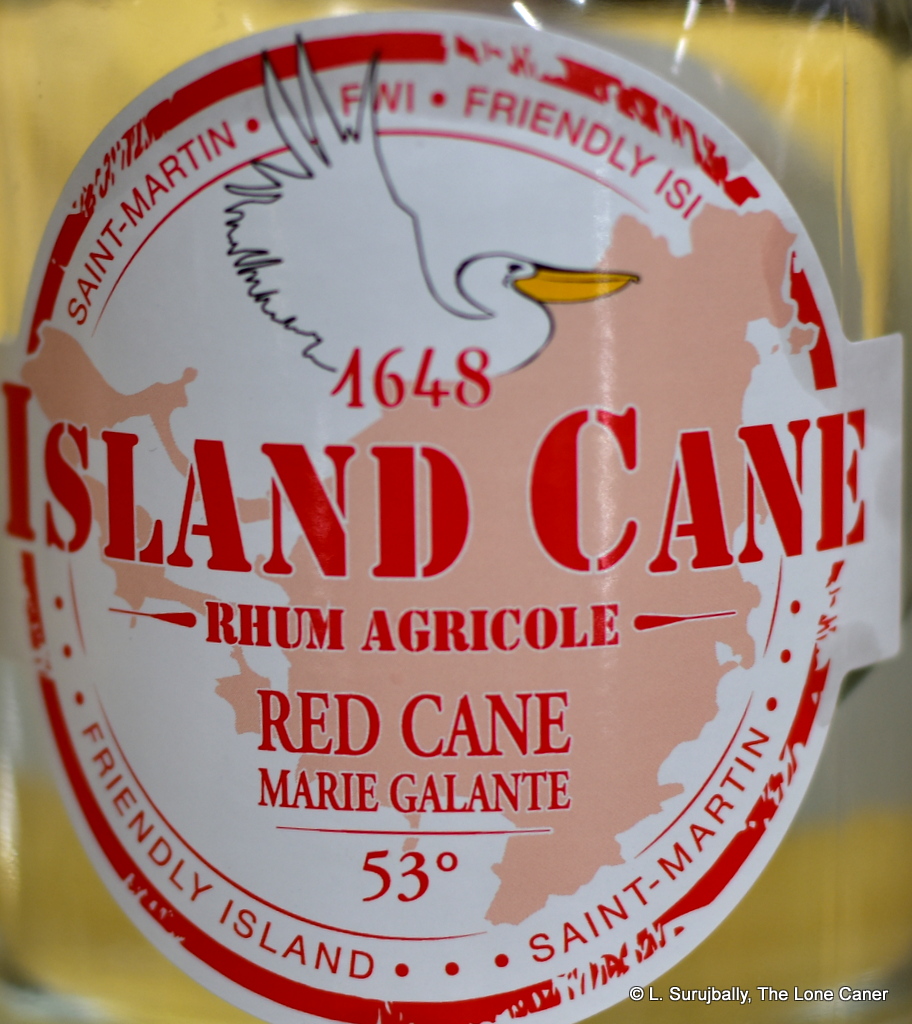 All that comes together in a rhum of uncommonly original aroma and taste. It opens with smells that confirm its provenance as an agricole, and it displays most of the hallmarks of a rhum from the blanc side (herbs, grassiness, crisp citrus and tart fruits)…but that out of the way, evidently feels it is perfectly within its rights to take a screeching ninety degree left turn into the woods.  Woody and even meaty notes creep out, which seem completely out of place, yet somehow work. This all combines with salt, rancio, brine, and olives to mix it up some more, but the overall effect is not unpleasant – rather it provides a symphony of undulating aromas that move in and out, no single one ever dominating for long before being elbowed out of the way by another.

In short, I thought this was a really fantastic white rhum. As I remarked above, it doesn’t say from which plantation / estate on Marie Galante it hails, but my own feeling is that it is not a blend – the tasting coordinates dial in too precisely, it’s too lacking in the smooth, carefully-mixed, please-all-comers anonymity to be a blend, and in any case, what are the chances that a single varietal’s cane is harvested at the same time, crushed to juice at the same time, on multiple estates, and then brought together to form a blend?  No, I’m suggesting this is one estate’s rhum, and I wish I knew which one it was, because it’s one damned fine white rhum, affordable and right tasty, and I really want some more. It’s a blanc rhum to treasure. 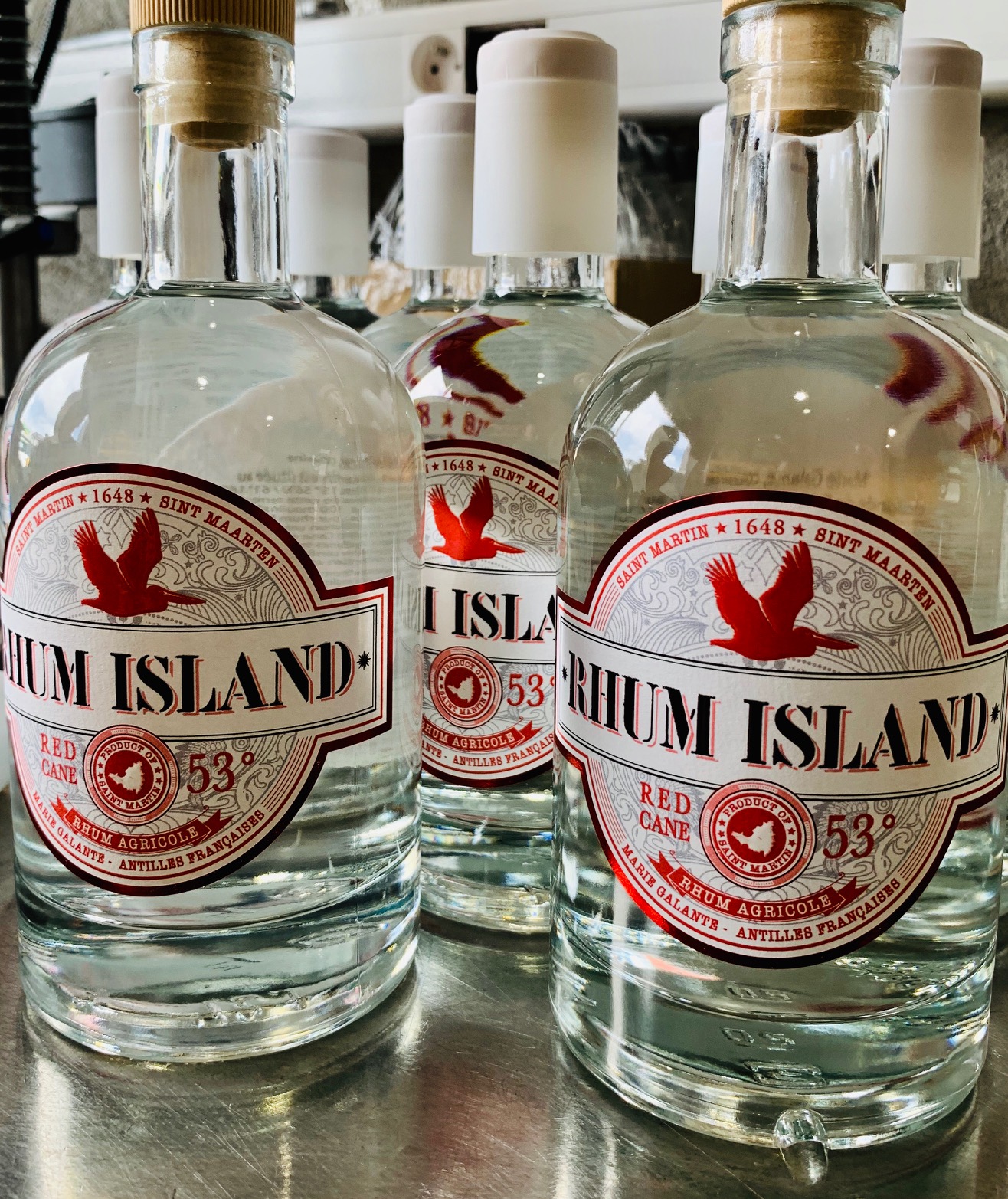 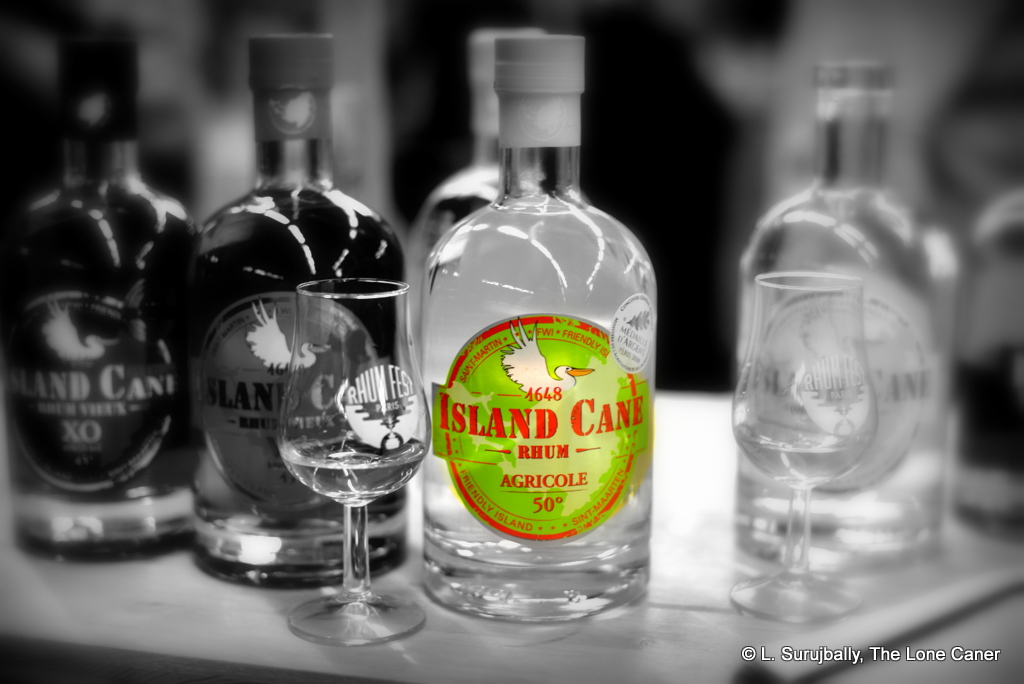 There are quite a few interesting (some would say strange) things about the Rhum Island / Island Cane brand, and the white rums in their portfolio.  For one thing, the rhums are bottled in Saint Martin, only the second island in the Caribbean where two nations share a border – the Netherlands and France in this case, for both the constituent country of Sint Maarten (south side) and the Collectivité de Saint-Martin (north side) remain a part of the respective colonizing nations, who themselves don’t share a border anywhere else.

Secondly, there is neither a sugar or rum making industry on Saint Martin, which until 2007  was considered part of – and lumped in with – the overseas région and département of Guadeloupe: but by a popular vote it became a separate overseas Collectivité of France. Thirdly, the brand’s range is mostly multi-estate blends (not usual for agricoles), created, mixed and bottled in Saint Martin, and sources distillate from unnamed distilleries on Guadeloupe and Marie-Galante. And the two very helpful gents at the 2019 Paris Rhumfest booth — who kept filling my tasting glass and gently pressing me to try yet more, with sad, liquid eyes brimming with the best guilt trip ever laid on me — certainly weren’t telling me anything more than that.

That said, I can tell you that the rhum is a cane juice blanc, a blend whipped up from rhums from unnamed distilleries on Guadeloupe, created by a small company in St. Martin called Rhum Island which was founded in 2017 by Valerie Kleinhans, her husband and two partners; and supposedly conforms to all the regulations governing Guadeloupe rhum production (which is not the AOC, btw, but their own internal mechanism that’s close to it).  Unfiltered, unaged, unadded to, and a thrumming 50% ABV. Single column still.  Beyond that, it’s all about taste, and that was pretty damned fine. 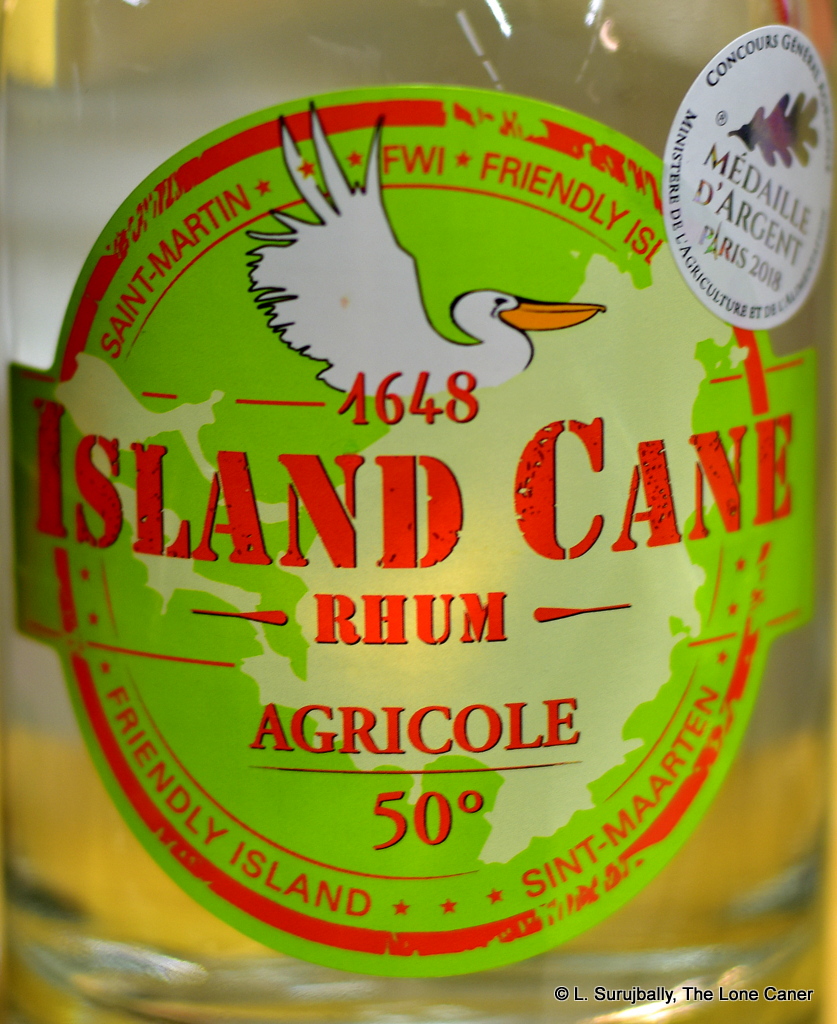 I mean, admittedly the nose wasn’t anything particularly unique – it was a typical agricole – but it smelled completely delicious, every piece ticking along like a liquid swiss watch, precisely, clearly, harmoniously.  It started off with crisp citrus and Fanta notes, and that evocative aroma of freshly cut wet grass in the sun.  Also brine, red olives, cumin, dill, and the creaminess of a lemon meringue pie.  There is almost no bite or clawing at the nose and while not precisely soft, it does present as cleanly firm.

Somewhat dissimilar thoughts attend the palate, which starts out similarly…to begin with.  It’s all very cane-juice-y — sugar water, watermelons, cucumbers and gherkins in light vinegar that are boosted with a couple of pimentos for kick. This is all in a minor key, though – mostly it has a herbal sweetness to it, sap and spices, around which coils something extra…licorice, cinnamon, something musky, bordering on the occasionally excessive.  The rhum, over time, develops an underlying solidity of the taste which is at odds with the clean delicacy of the nose, something pungent and meaty, and and everything comes to a close on the finish, which presents little that’s new – lemon zest, cane juice, sugar water, cucumbers, brine, sweet olives – but completely and professionally done.

This is a white rhum I really liked – while it lacked some of the clean precision and subtlety of the Martinique blanc rhums (even the very strong ones), it was quite original and, in its own way, even new…something undervalued in these times, I think. The initial aromas are impressive, though the muskier notes it displays as it opens up occasionally detract – in that sense I rate it as slightly less than the Island Rhum Red Cane 53% variation I tried alongside it…though no less memorable.

What’s really surprising, though, is how easy it is to drink multiple shots of this innocent looking, sweet-smelling, smooth-tasting white, while enjoying your conversation with those who nod, smile, and keep generously recharging your glass; and never notice how much you’ve had until you try to express your admiration for it by using the word “recrudescence” in a sentence, and fall flat on your face.  But trust me, you’ll have a lot of fun doing it right up until then. 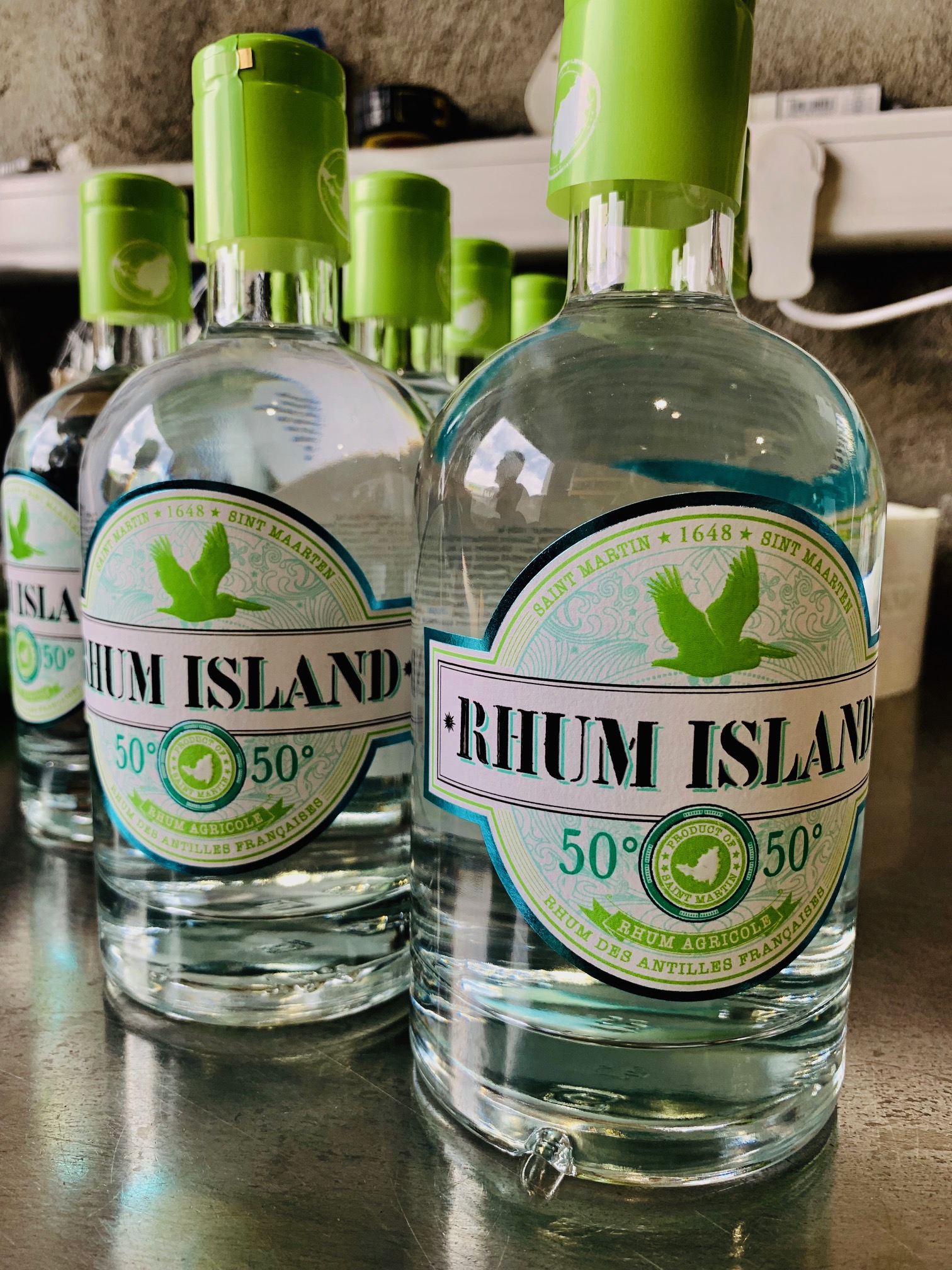