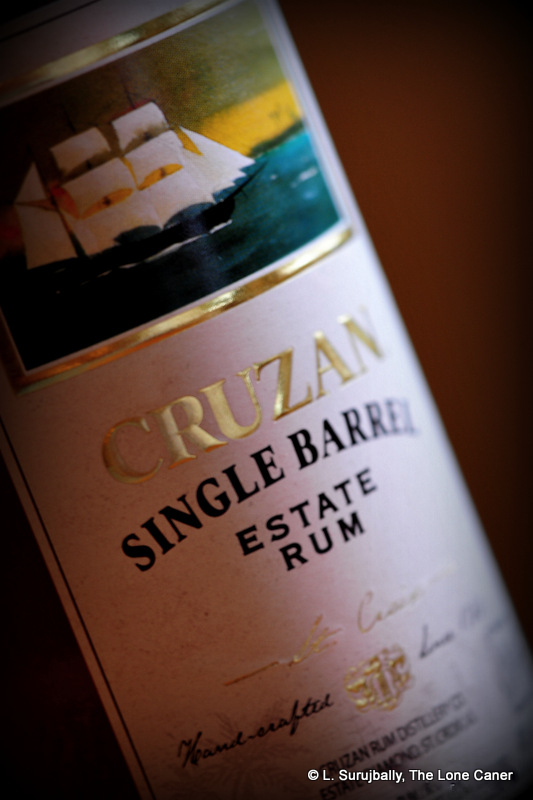 A solid and well put together rum of intriguing complexity and excellent overall quality.  More should not be said, and, indeed, need not be said. It’s good as a sipper or a mixer, over ice or neat.  Enjoy.

Cruzan is that distillery from St Croix in the West Indies which makes one of my favourite under-$50 rums, the single barrel dark rum, written about and appreciated before I started assigning scores to my reviews. Unlike that somewhat more commercial rum, this one, clearly noted as an estate rum, was also marked as being bottle #344,450 of barrel 86158 and certified by a handwritten signature that looked like Ron Call, which gives it an air of authenticity the other, more beguilingly presented product lacks. Poking around, it’s clear that this is a bottle left over from the days before they changed the presentation back in 2010, to what is now found in stores. In other words, unless you search older stocks for it, it’s likely you won’t find this one any more.

Presentation-wise, I’d say it started by pleasing me right off.  Pebbled bottle with a wooden tipped cork hatting a long neck, aforementioned little blurb, and the main label with an interesting rendition of a fast clipper from the 1800s.  Cruzan has been making rums (officially and unofficially) since 1760 and I guess they wanted to put a little of that old-fashioned history into their presentation.

This gold 40% rum – which according to my research is a blend of rums aged up to 12 years — was somewhat different from  its successor: slightly sharp on the nose, with scents of green apples, some herbal grassy notes, and a green grapes background.  After it opened up a little, I could taste brown sugar, what may have been breakfast spices and some caramel, and citrus and coconut shavings.  An interesting melange, very nice indeed. 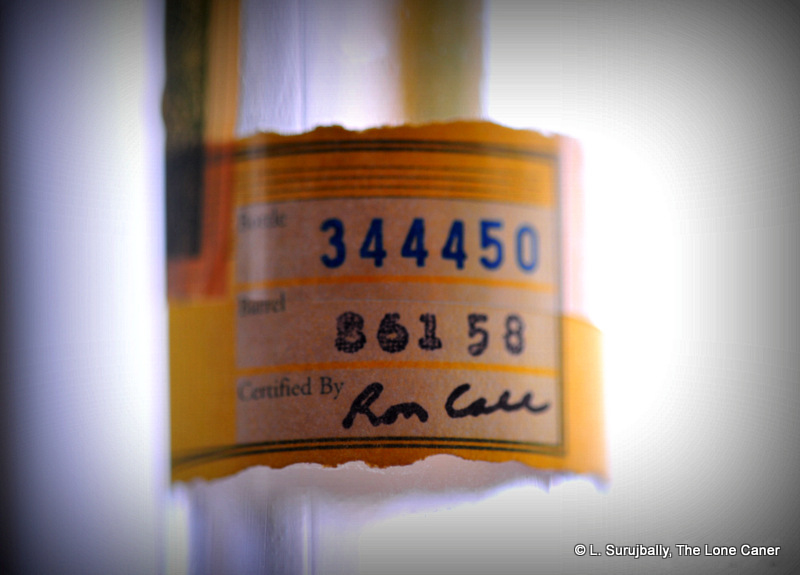 The taste followed on from that, and unlike the Cruzan Single Barrel dark rum, which was nuttier and had more evident notes of butterscotch and burnt sugar, this variant was lighter, cleaner.  It was like a golden cognac, almost crisp, a shade drier, and smoother than a baby’s bum.  Flavours of coconut chased light sugars and spices (maybe cloves?) and vanilla around, and all I could think is that I was impressed (as I had been with the newer variation) with the overall marriage of flavours. For a rum under fifty bucks, very impressive.  The finish was a little more average, being medium long – there was a certain spiciness on the back end, a last shade of heat – perhaps it was the vanilla/coconut combo teasing me a little before bailing for de Islands. 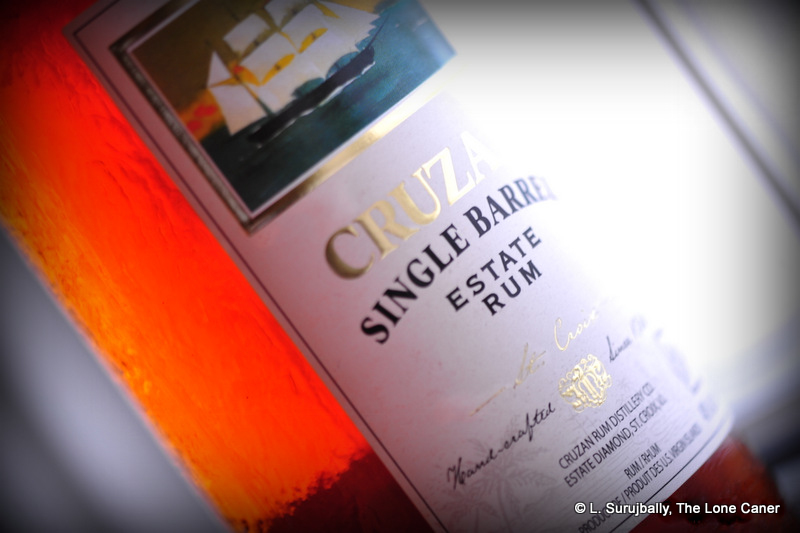 Cruzan Rum was created by the Skeoch family of Estate Diamond in 1934, and was based on a pot still bought by Malcolm Skeoch in 1910 when St. Croix was part of the Danish West Indies (yes, Denmark); he founded the Diamond Rum Company to take advantage of the repeal of Prohibition – St Croix had been bought by the USA in 1917 and so came under the Volstead Act. The brand and estate’s management stayed with the Skeoch family until 1961, under their direct management from its inception until 1964, and tangentially until 1976.  The word “Cruzan” derived from a generic name for rum produced on the island – “ crucian” rum.  I’d like to tell you more, but this is one instance when the source of much of my information rewards the person who follows and reads it through – it may be one of the most complete distillery histories I’ve ever read, and far too much to even try abridging here.

Returning to this excellent sub-$50 gem, I confess to being quite pleased with its quality.  Nose and palate are excellent, the fade pretty good, and it’s an overall very solid above-mid-tier rum. Because I was busy tonight rearranging older posts and getting my photographs put together I did not spend as much time writing the usual flowery hyperbole that would grace a strongly emotive review….but suffice to say I was sipping this excellent product of Cruzan’s throughout and highly recommend it no matter what you yourself are up to.

Completely solid rum, that succeeds on many levels.  Strong taste, well defined flavour profile, just enough sweet and a lovely dark body that doesn’t quit. Wow. A worthy addition to the shelf, to be doled out to real friends.

Against the constant whine I make about rums not stating their proper age on the bottle (like some sly strumpet misrepresenting her quality), I have to concede that having a friend to not only help drink it but who’ll trot out his own cherished stocks to stretch out the binge is some small way a decent compensation.

The not-so-mythical Bear, who very thoughtfully helped me change my winter tyres, suggested one or two vintages from his pantry (a Santa Teresa 1796 for one), but I had bought this intriguing new as-yet-unsampled dark rum hailing from St Croix for ~$35 from the much lauded Western Cellars store in Midnapore (I was disappointed yet again with the paucity of the rums which contrasted badly against the groaning and crowded shelves filled with expensive twelve year old or greater scotches), and since this is a tad more expensive than the normal hooch that goes for $25, I thought it was time to try it.

Keenan’s hurt look of reproach (he has spaniel eyes that really work well for this), that I could find the contents of his private cellar somehow less than adequate, mellowed quite markedly as soon as he saw the bottle. For all his talk about not wanting his bottlers to waste time dandifying their wares and thereby jacking up the price for nothing but cosmetic upgrades unrelated to true quality, Keenan is a bit of a sucker for a real cork. St Croix had a suitably exotic ring to it.  And the little label at the top, where real ink noted this was bottle X from barrel Y, impressed us both even as we snorted our skepticism.

Still, Cruzan’s single barrel rum is not bad at all, for a rum that is blended from a series of 5 year to 12 year old rums. It has a pungently sweet nose that states its origin in molasses quite clearly.  The original rums that create the blend are aged in white oak whiskey and bourbon barrels, but the resultant is then itself aged in yet another charred barrel for a further period about a year, and I’ll tell you, that thing creates a deep amber colour and a striking nose that a single ageing would not produce.  You can taste hints of  caramel, vanilla, butterscotch, dark fruit and faint nuttiness, and the finish, while not quite as smooth as I would like, is not unpleasant at all, and lasts for a good bit.  It’s reminiscent of a good cognac. It’s dry and clean and the burn is quite mellow, really.  And I have to say it: it pleased my sweet tooth, and the body is decent, so while I might not drink it neat, over ice it’s perfectly drinkable, and with a coke I’d say it’s just veddy veddy good.

Honesty compels me to admit that I had to do a second taste at home, after departing Keenan’s porch somewhat worse for wear.  Sampling the Santa Teresa (it’s quite good, but I have to write the review) and then the re-tasting the Appleton Master Blender’s Legacy (which is about as poor on the finish line as I recall), then following that up with 3/4 of the bottle of this exemplary Cruzan had me seeing three Keenans as I departed.  My mother raising me as she did, I said goodbye three times, and assured each one of the three that when it comes to a good mixing rum, or just a damned decent drink for a reasonable price, this Cruzan is definitely a good buy.

Hopefully the Bear was in better shape than I and can remember what a good drink it was:  I guess I’ll see the next time I raid his stocks or he comes over to pilfer mine.