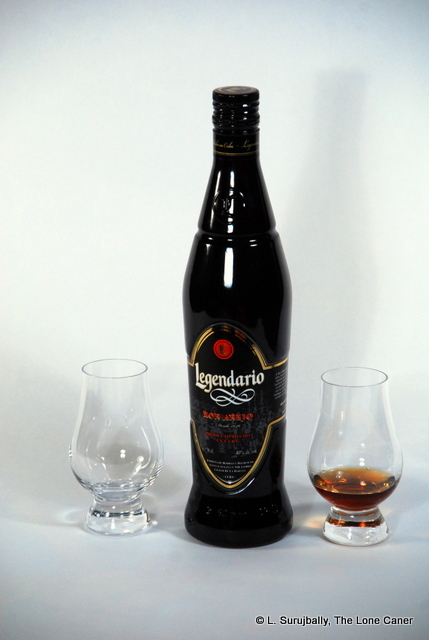 A blended rum given enhanced flavour by the addition of Muscatel wine prior to final ageing.  This creates an unusual almost-sipper that is not entirely to my taste but cannot be denied for what it is – an intriguing essay into the craft of playing around with the basic brown-sugar sweetness of rum to get something quite unique.

Legendario Ron Añejo is a Cuban rum, but makes no concessions to people North of 49 who don’t habla, since nothing on the label is English (or French).  Fortunately, as a travelling vagrant, I have a smattering of several additional tongues (and can curse pretty well in about fifteen or so, but never mind), so this was no barrier.  The rum is exported around the world, and is an interesting entry into the world of aged spirits, not least because its flavor profile is so exceedingly odd.

This was a rum I bought as an impulse purchase, for about thirty bucks, and my opinion was that it’s a middling rung of the Legendario product ladder.  There isn’t much of that to begin with: the entire line seems to consist of six rums both dark and white, with the Gran Reserva 15 year old being the top end. The Ron Añejo is a rum that blends a 47% solera with rums that are one, four and six years old, and then a small smidgen of Muscatel wine is added, after which the resultant is aged for fifteen days in oaken casks prior to bottling.  While produced in Cuba, it is marketed primarily out of Spain and although I’m not sure, I suspect that this final ageing takes place there also.

The nose suggested it might be.  I didn’t care for it on an initial sniff – I was hit by a deep and cloying fruitiness, like overripe papayas or even the Australian Bundie, neither of which is on my list of all-time favourites – and this proves why it is so necessary never to let your first try dictate your final opinion.  Taking in the nose a second and third time, I got the same aroma, yes, but then it dissipated and mellowed out into scents of honey and dark sugars, infused with the sharper but muted tannins of oak. Not so much as to make it a bitter experience, just enough to prove it had been aged.

The taste was fascinating and continued on from the nose: the Añejo did in fact have a robust medium body, and was smooth and rich on the tongue, leaving a nice oily film that distributed a flavour reminiscent of cigars and tobacco (and oak).  A smoky caramel-toffee flavour slowly developed and married into an emergent taste of cherries and ripe papaya. I was not entirely enamoured of this element: it was quite a fruity little number, perhaps too much so, and it was only when I did my customary research that it occurred to me that the added Muscatel – a black, quite sweet variety of grape – was in all likelihood responsible for these overripe fruity tastes I was getting hit with. I remain unimpressed with the effort while acknowledging its originality.

What’s my opinion on this one? Tough call. I do not believe the Muscatel adds anything to it except differentiation from the crowd. It may be that there was simply too much of it, and it sort of crowded out other flavours, to the overall detriment of the whole rum.  As a sipper, then, it’s borderline.  As a mixer, if you take something with less than the normal amount of sugar in it – say, Coke zero or ginger ale or some such – it’ll probably make your day.

Americans, who have maintained their trade embargo of Cuba for longer than many residents of Florida have now been alive, cannot legally import any of the sterling products of the island nation, the most famous of which are cigars and rums (although I’m sure that aficionados get their stocks regardless).  The Legendario is a better-than-middling product, to me: it is not on par with Havana Club’s barrel proof offerings, and I’d really like to give the Gran Reserva 15 year old a twirl on the dance floor – but it’s not bad for all that, even given its initially startling fruity nose.  Legendario is nothing to break the embargo over, mind you – prospective purchasers of this rum in the USA can wait until the embargo inevitably gets lifted – but if you can get it, by all means snag a bottle.