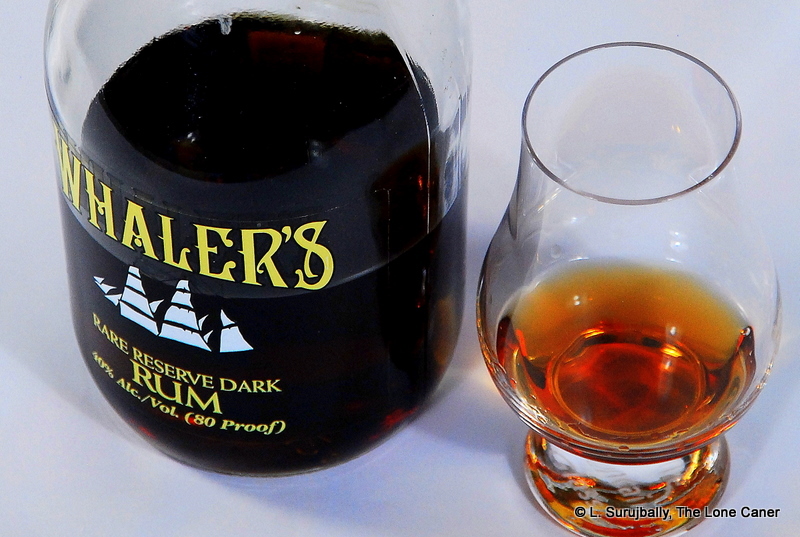 Whaler’s Rare Dark Reserve Rum is all characteristics and no character: smell without nose, burn without body and aggressiveness bordering on the obnoxious without actually delivering on any of the promises it makes.  Don’t let the tempting scent fool you.  That’s most of what you’re gonna be getting.

Whaler’s Rare Reserve Dark rum is not, as its advertising might imply, made in Hawaii.  Its website certainly suggests the connection by touting the traditional recipe used by whalers in the old days, copied from native islanders’ own rum production on Maui and perhaps infused with vanilla beans once used to rattle around in bottles, meant to entice whales to come closer. An amusing tale which may even be true. Be that as it may, the rum takes its name from the hardy sailors who once plied the Pacific searching for the whales to decimate and made rum on the side when stopping for R&R in the islands. But it’s actually made in Kentucky, by Heaven Hill Distillery and is a commercially indifferent low-cost, low-effort, low-interest spiced slop marketed to people who know no better, on an industrial scale. 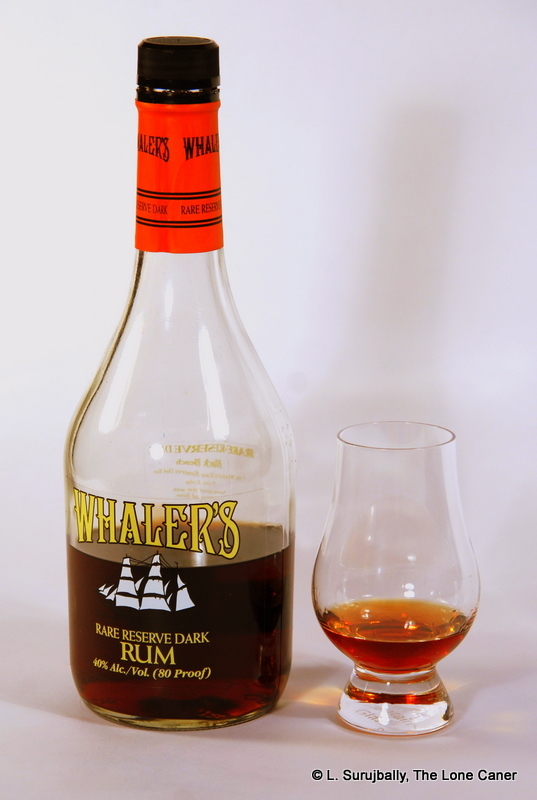 For a bottle costing less than $25, you can’t expect too much, and indeed, it doesn’t deliver too much.  In that sense, it is not like the Tanduay, an undiscovered steal: it’s just a low level adulterated rum made from neutral spirits.  What makes it stand out from the crowd is a nose of real, if simple, power.  Open this bottle and just let it stand there: it’s like somebody let off a butterscotch bomb in the room (and lest you think I’m exaggerating, I tasted this with a group of Scotiabank employees, and one of them smelled it twenty feet away in less than three seconds…before I poured a single glass). I have gradually been corrupted into using a glencairn glass, but truth is, you don’t need something snooty for Whaler’s – what you really need is a gas mask to filter the thing out.

The darkness of Whaler’s is, I concede, appealing, and it sports a medium body (I expected something heavier and richer from that colour, but no…).  In the glass it sports thin legs, and that is where this kind of test proves its worth.  Consider: a strong, overpowering nose of butterscotch and vanilla through which you can dimly and imperfectly sense caramel and some sugar and pretty much nothing else.  A body that stings and burns and delivers that taste…and nothing else.  A finish that is short and thin and stings (not much, but that’s me damning it with faint praise)…and nothing else.  I’ve heard and read of rum lovers discussing “hollow” rums, which have all promise and no delivery – this is the first one I’ve ever tried.

What Whalers really is, when all is said and done and drunk, is a flavoured, spiced rum.  Not even fancy herbal stuff like, oh, the Tuzemak, or even Captain Morgan – those two have the balls to put their money where their advertisements are and don’t have airy pretensions to more than that – but just a bucketload of caramel, vanilla and butterscotch flavouring poured into some 40% rum. As a low level mixer this will be okay, I guess.  As a sipper it fails, utterly, unless you’re after a harsh liqueur of some kind, or a cocktail base.  I know I’m not, but if you are, I’d suggest a coke zero or some other non-sweet mixer: this thing is too sugary by half already and doesn’t need any further embellishment.

Heaven Hill distillery from Bardstown, Kentucky may be the harbinger of an accelerating trend: that of larger distillers diversifying their entire portfolios and producing more than just the spirits that once made their name.  Bacardi has stuck with rums (and has one at every price point except the stratosphere) as has J. Wray & Nephew, but research I’ve done on Tanduay, Banks DIH, DDL and of course Diageo shows that these big guns (among others) are producing vodkas, tequilas, gins, whiskies, liqueurs and just about everything else north of 30% ABV.  Even Bruichladdich and Cadenhead are now experimenting with rums as opposed to straight whisky production and American “craft” distilleries in particular seem to want to make everything possible on the one still they might have. And here is the Whaler’s Distilling Company, a subsidiary of the behemoth of Heaven Hill, producing rums in Bourbon country. And vodkas. And Gin.  And other stuff.