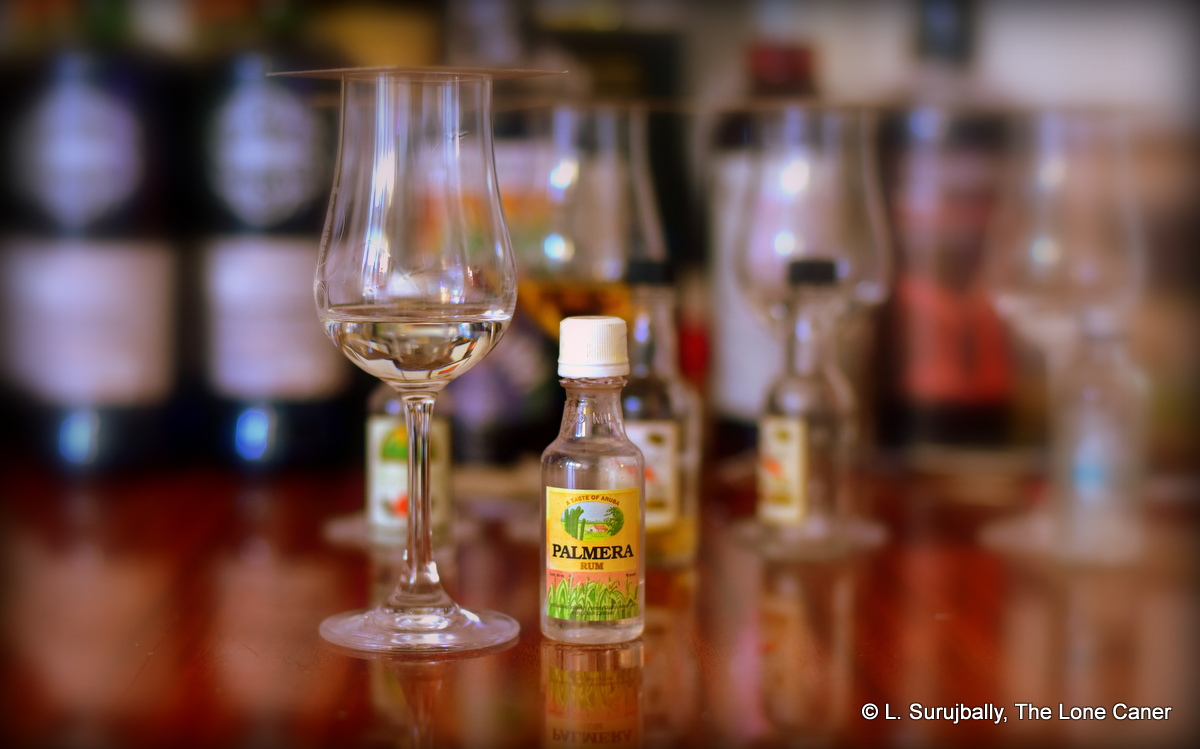 The fourth and last of the four Dutch West Indies rums that I obtained solely to shed some light on the islands is a pale 35% shrug of indifference called the Palmera White Aruba rum. You know me, I have a thing for unapologetically barking-mad high-proofed white rums – but dis ain’ dat, as my bushmen squaddies would say back in the old days.

Were you to google it, you’d find that the Palmera Quality Products company produces several rums – notably the White and the Dark “authentic Arubian rums with a rich heritage flavour” at standard strength, and is at pains to mention on its About page that “…PQP produces many different beverages in its own processing plant…[and] produces products locally from carefully developed formulas that meet international standards.” No mention of a distillery, a blender, a sugar cane source, an ageing regimen. Call me a cynic, but it sure implies a mass-produced neutral-spirits-treatment operation to me, not a rum made by a dynamic master blender who knows his sh*t, let alone by a distillery that can be identified.

And maybe that’s why I can never find out anything about these companies, and why the Dutch West Indian islands’ rums – the San Pablo Gold label and Platinum White from Curacao and the Carta Reserva from Aruba – have singularly failed to make any lasting impression on the rumisphere. That might also explain why nobody ever posts an ecstatic hosanna on FB saying “I got this!” and then basks in the glory of the hunt concluded, the find immortalized, the cheers of the envious crowd modestly acknowledged. 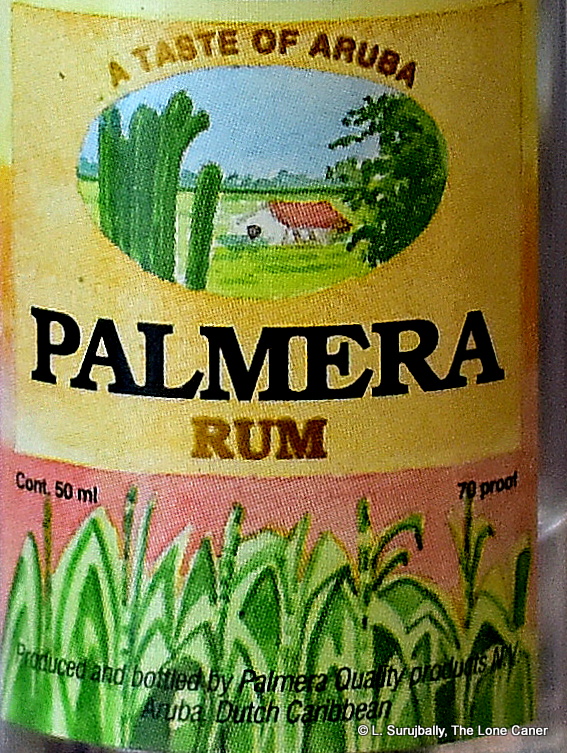 So then, what was in the glass that day? A white rum, 35%, supposedly from Aruba (I suppose otherwise), and very little to go on beyond that. As befitting its puny mouse-that-roared proofage, it didn’t give off much of an aroma – sugar water, grass, dill, the sweetness of laundry detergent and a tad of lemon juice.  It was marginally more assertive than the Carta Reserva, and maybe a shade better balanced between some sweet and lemony components.

The taste was mostly sodas: 7-Up or Sprite, cream soda.  Some vanilla, coconut, and vague herbaceous flavours, sugar water and pears, and believe me, that was reaching. Maybe it’s an island thing, to make rums this weak (the current rums listed on the website are similarly proofed, bar a pair of 151s), but all a rum like this one can do is juice up a cocktail or give you a headache in hot weather because you won’t think something so mild could affect you, when of course it can.

The Palmera is as unprepossessing as all the others from the region I’ve sampled (bar the untried overproofed 151s).  It’s light and white, weak and meek, and after the first three tries with its cousins, I approached it with distinct lack of enthusiasm, and finished the tasting exercise with relief. The rum just, I dunno, has this indifferent air of “good ‘nuff” that offends me for some reason, like barely enough effort was put into it to make it sell, and no more. Even the Curacao San Pablo rums at least had the courage to go to 40% instead of messing around with this underwhelming strength.

Socrates remarked that “The unexamined life is not worth living.” Where I to apply that here and paraphrase, I’d add a codicil that the Palmera and its cousins makes inevitable – “Sometimes the examined rum is not worth drinking.”  Sorry, but here that’s God’s own truth, and the best I can say about it is that although it’s pointless and purposeless and near tasteless, let’s be grateful that at least it’s painless.

The design of the modern labels is quite different from the one I bought, so I assume there’s been some changes over the years.  I don’t know if the blend or recipe was changed when the label did, nor am I aware when this happened 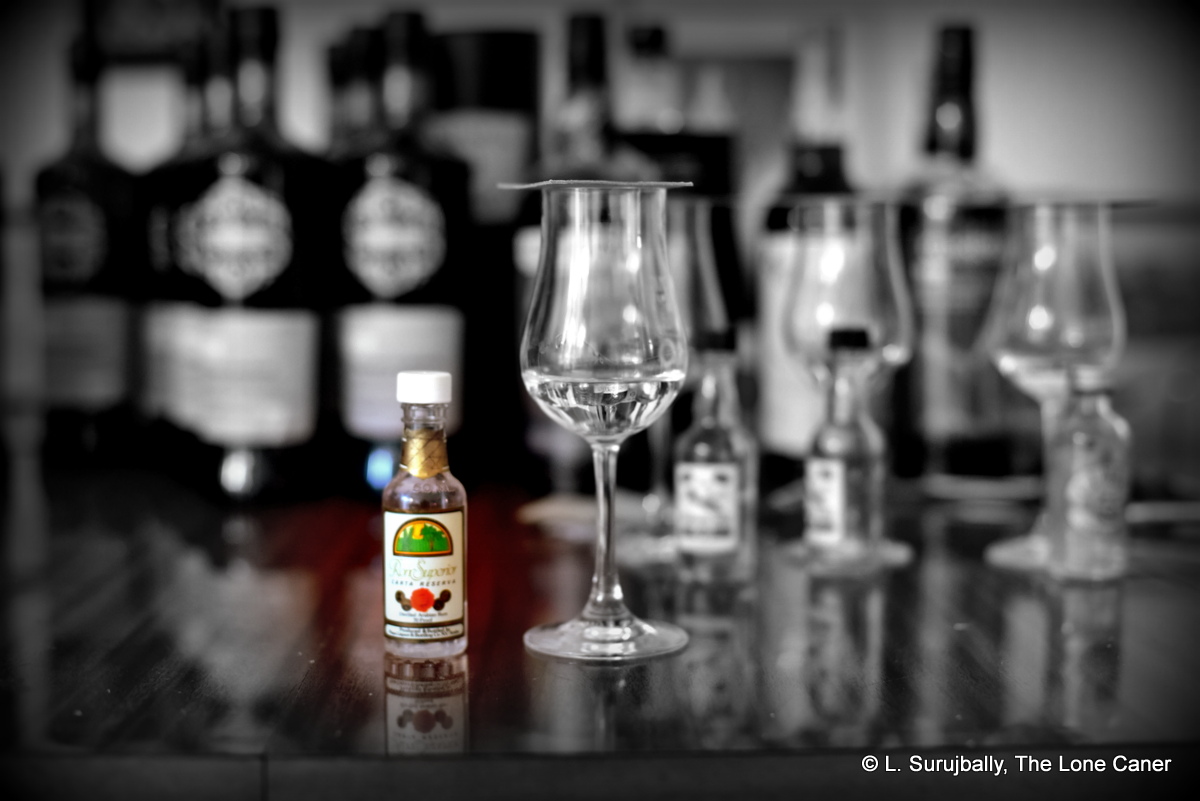 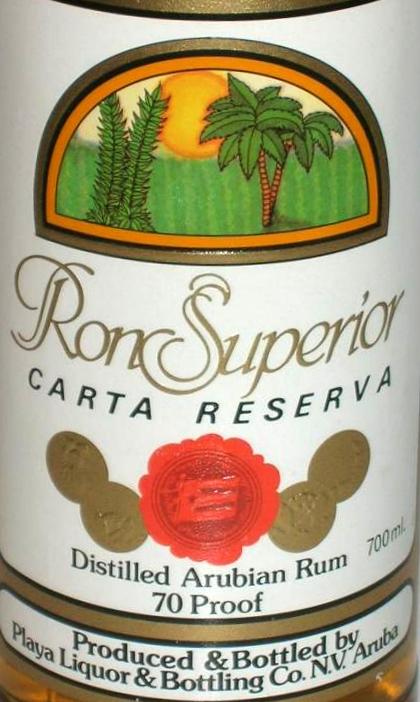