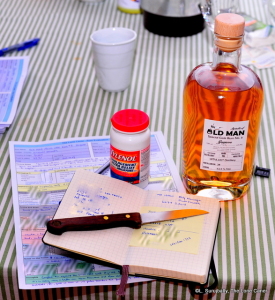 Curiosity.  That’s what got me here: simple curiosity.  I’ve never tried anything by Old Man Spirits, but man, I thought, how can you even begin to argue with that cool distillery, and the strapping libido of 62.9%, which is powerful enough to make Cadenhead and A.D.Rattray take a respectful step backwards and cross their knees. And I loved the Spartan, zen-like simplicity of the bottle, which resembled nothing so much as a production prototype before some marketing genius started tartin’ her up.  So yeah, when I was contemplating my purchasing decision, I took a flyer.  What the hell, right? It’s not like you get a chance to check out tasting notes on a relative newcomer every time to see if there’s value for money here.

Old Man Spirits is a craft maker based in the north of Germany, around Schleswig, and is a new entrant to the field, I think.  They have a Panama rum, a Guyanese rum (this one), one from Belize, a Caribbean blend (including a spiced version), and a gin. There will be others. Their website is still very much a work in progress because while it has good notes on the products’ profiles (plus some plugs for how good they are), none at all on the sourcing or making of these products, or the company’s stated philosophy.

Getting back to the review: as noted, extremely simple presentation; wood tipped cork, nice; hay-honey coloured spirit, bottled at cask strength.  All good.  It was medium bodied, even light in the glass, and I loved that yellow colour.

The aromas on the nose were intense, of course – couldn’t get away from that, not at 62.9%. Bread and butter, salt crackers whiffed over with white pepper and a very spicy burn started things off. The rum was quite raw, even searing – as unexpectedly severe as my schoolmaster’s ruler (“Pay attention Mr. Caner!” whap!).  I’ve had my share of cask-strength monsters that had been in oak barrels for many many years, but this one definitely left a few shavings from the bark in there. Some softer notes tremulously crept out after ten minutes or so: faint white flowers, powdered sugar, unsweetened dark chocolate, not enough to make a real difference.

On the rather dry palate, a little sweetness began to be noticeable, and little of the salt cracker aroma carried forward, thank heaven; yet the burning lack of couth persisted – vanillas, tannins, florals, all the stuff I’d expect from an Uitvlugt distillate, were so muted as to be virtually absent.  Even adding some distilled water didn’t save it. And man, was it ever fierce. Holding on to this rum was like grasping a live grenade. The finish, long as it was, exhausted me.  It was all heat and spice burn and little in the way of closing scents (very faint chocolate and vanilla). By the time I was done sampling, I was left feeling dissatisfied, a shade undernourished and perhaps even underwhelmed: I’d been on a so-so ride with something, just not one that added up to much of anything. 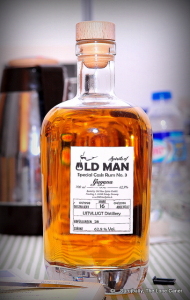 While it may have been unfair to compare this to Velier’s Uitvlugt 17 year old from last week, I did have them both at the same time and the comparison was inevitable…to the detriment of OMS, I’m afraid.  OMS was strong and from a source distillery I like a lot – hell, from a country whose spirits I like a lot.  Yet, for a product this expensive (€90 via Rum&Co) that wasn’t enough…I wanted and expected more.  It therefore only gets points for intensity and some interesting moments on the palate, and in my earlier days, gotta be honest folks, it would not have cracked 70.

Producing a quality, aged, cask-strength feral feline requires more than merely a draw-off from an old barrel somewhere – in order to make the product create vibes, generate word of mouth and really sell, attention has to be paid in ensuring that the thing tastes like more than just fuel for an Abrams tank, and this is something Old Man Spirits could perhaps take note of. After drinking this full-proof rum, I felt like the lady from Riga.  Old Man Spirits Special Cask No. 3 62.9% has done its best to tame the raging tiger trapped in the bottle, but somewhere along the line, it faltered, and now I know what it feels like when the tiger gets loose and bites back.