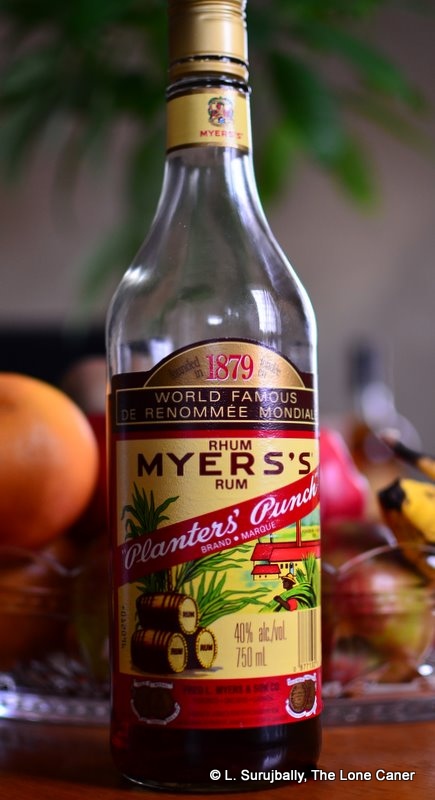 Big, stompin’ rum maybe meant to be a mixed-drinks base but really good neat. Definitely helpful for getting loaded when dollars are tight; interesting when mixed in any number of cocktails. Feeling lonesome in some cold winter clime and miss the Ole Country? This will cure what ails you.

I don’t always get top end rums like Barbancourt’s Estate Reserve 15 year old to try, and often, I don’t even want to try them. Sometimes, like most people who’ve had a hard week, I just kick back with a glass of hooch that makes no pretensions to grandeur, pour it, mix it and glug it, and like the fact that it’s just there to make me feel better. Myer’s Planter’s Punch Dark Rum falls squarely into that category, and joins – maybe exceeds – fellow palate-deadeners like Young’s Old Sam, Bacardi Black, Coruba or Potter’s at the tavern bar. These are single digit rums or blends, meant for mixing (cowards cut ’em with whisky) and for my money, they’re all sweaty rums for the proles, displaying a remarkable lack of couth and subtlety – I appreciate them for precisely that reason.

Pour a shot of the stuff and you’ll see where I’m coming from: Myer’s is a dark brown-red, oily rum quite distinct from Appleton’s lighter coloured offerings, and the scents of molasses, liquorice, nutmeg and dried fruit don’t merely waft out onto your nose – they gobsmack your face off. Once you stop crying like a little kid at the neighborhood bully or staring at your glass in wonder, I imagine you might try to recover your dignity, and observe how you can detect caramel, vanilla, perhaps a bit of nutmeg, coconut, citrus. Quite encouraging for something so cheap (less than $25).

The tromping arrival of unleavened flavour square-dancing across your tongue is perhaps the main selling point of a rum like Myer’s. What is lost in subtlety is made up for by stampeding mastodons of a few distinct profiles that actually mesh quite well: caramel, coconut shavings, molasses, fruit, burnt sugar with maybe some orange peel and baking spices thrown in. There’s a weird butteriness in the taste somewhere… maybe from the ageing? Overall, I wish I knew for sure whether they augmented the profile – as I think they have – with any additives: a rum this cheap is unlikely to be this interesting merely on the skill of a blender (if it was, it wouldn’t be so cheap). And there’s a fade here, boys and girls, but it’s strong – more like the exit of a gentleman bank robber discretely blasting away with his gat than the soft silken swish of something more polished. And it’s long, very pleasant – this is a rum which could easily be stronger and still be good.

Mix Myer’s Dark Rum in a Planter’s Punch, in a dark-rum cocktail (feel free to consult Tiare’s excellent site a mountain of crushed ice or any tiki site for ideas) or just mess with the old stand-bys, and the few weak points of the drink as a neat drink are smoothened out and it becomes an excellent base for whatever you feel like making. I’m reviewing it as a sipper, as I must, but this should not discourage you from trying other variations. 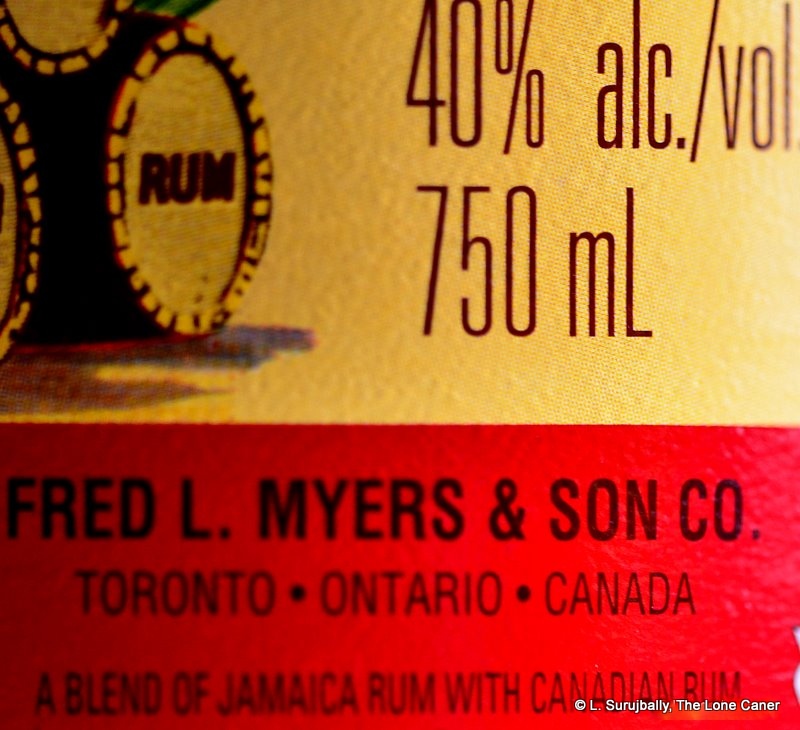 Myer’s Dark Rum is hardly an unknown, of course, having been a staple of the cocktail makers’ bars the world over for decades: It was indeed made specifically to address the popularity of Planter’s Punch (which could be equally said to originate in a recipe dated 1908, or in a Charlestonian doggerel from 1878 depending on who you ask). The company founded by Fred Myer in 1879 is now owned by Diageo, and they continue to blend nine rums out of Jamaica at the southern distillery of Monymusk (the plantations of origin are more secret than Colonel Sanders’s recipe) into the drink that we know today. Monymusk, as you may recall, also makes the middling Royal Jamaican Gold rum, which isn’t anywhere near as fun as Myer’s. Aside from calling it the “Planter’s Punch” variation, it is supposedly the same as that first produced in 1879, made from Jamaican molasses, and a combination of distillates of both pot and column stills, then aged for four years in white oak barrels. I’ll also note that my bottle clearly states Myer’s is a blend of Jamaican and Canadian rums, at which I immediately sneer and say…well, “Bulls..t”, not the least because after years of crisscrossing the country in my beater, I still haven’t found a single sugar plantation and therefore I somehow doubt Canada has a rum of its own.

I have to be careful in assigning a rating to Myer’s. It’s not quite a sipper (damned close, though), but some of my review must address the sheer enjoyment I get out of it both as such, and in a proper mix – and even if it *is* added to. Like Young’s Old Sam, it exists in a somewhat less hallowed underworld of rums embraced by bartenders and not so much by connoisseurs, and which some believe must be braved only with fireproofed throat and iron-lined stomach for the crazies who drink it neat. It’s strong, powerful tasting, heavy on a few clear flavours – and doesn’t so much whisper its antecedents as bellow out the sea shanties. It may not be the coolest rum you’ve ever had, or the smoothest, but by God, when you’ve tasted this thing you know you’ve just had a *rum*.