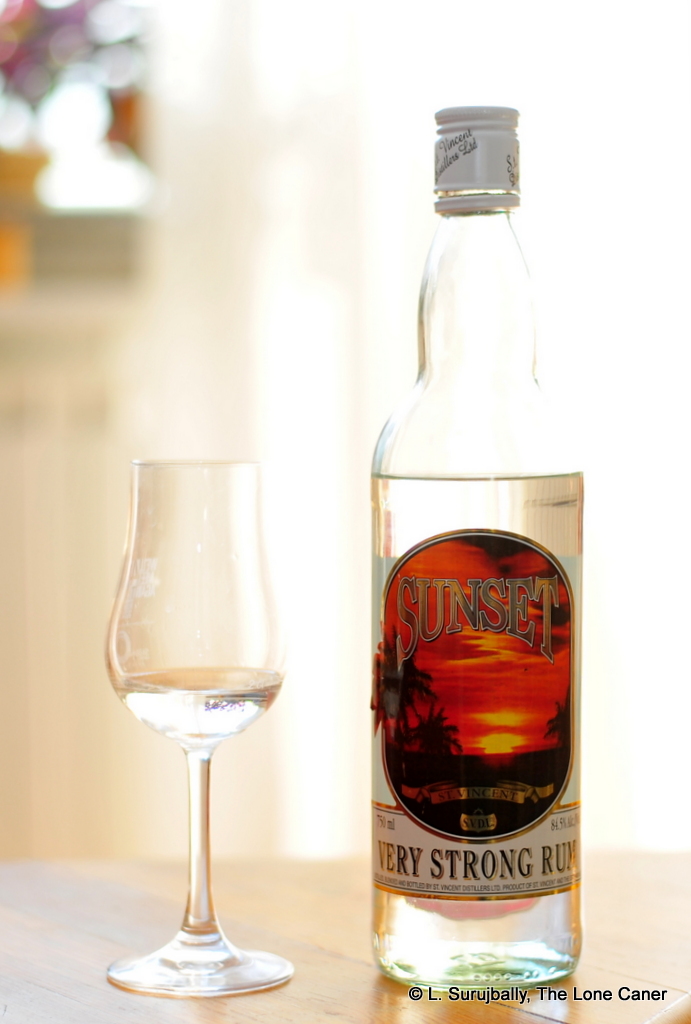 The Sunset Very Strong Rum is equal parts amazing and puzzling. For one thing, it’s not entirely clear why St. Vincent makes such a juggernaut.  Bragging rights, maybe? Even with their proof-point, 151s are vastly more popular, and more common, so what’s the point of this one?  About all it could reasonably be used for, after all is (a) a killer cocktail or mixer like the Vincentian “steel bottom” (a man-sized chug from the local Hairoun beer, then top the bottle back up with the rum, pleasant on a hot day, but only one or two…or your day would be done) (b) the fastest drunk ever (c) an economical boozer for those without deep pockets, since one gets two 40% bottles for every one of these, and (d) an excuse to use lots and lots of colourful metaphors.

Before you sip, a word of warning.  Move your cigar to the side. Make sure no sparks are nearby. Literally, take a tiny drop at a time. A teensy tiny one.  84.5% is so incredibly ferocious that even that small drop coated the entire tongue with a massive heated oiliness. And it was even a bit creamy.  Wow.  White chocolate, butter biscuits, philly cream cheese on wonder bread, vanilla ice cream, nuts, nougat, toblerone, all dialled up to “11” (make that “12”).  To call this rum sharp or chewy might understate the matter. It had so much maxillary oomph that it might well cause the shark in Jaws to go see his therapist, yet it was remarkable how much I enjoyed it. As for the fade, well, come on, what were you expecting? Long and dry as speeches my father makes at other people’s weddings.  Ongoing notes of vanilla, butter, white chocolate (nothing new here).  But those few, clear tastes went on for ages – I think my automatic watch might run down before the closing notes of the SVS dissipate. And before you ask – yes, I really liked this thing.