Germany has a number of home-grown rum makers out there.  Oh, they’re not world beaters by any means, but in a country that never really had any tropical colonies, no real culture of rum, no background in sugar cane production, it’s surprising to find any at all. And I’m always curious about these relatively small companies – after all, some small ones become big ones through sheer blending skill and mastery of craft bottlings and great word of mouth, right? Maybe this will be one of them, who knows, let’s take a look, I always tell myself. And let’s never pretend that a background in making other spirits does not have its positive side.

I’ve looked at two other German companies’ rums before (Old Man Spirits and Alt-Enderle), and today I’ll turn my attention to Severin Simon, a small distillery out of Bavaria, which has been, in one form or another, open for business since 1879. Severin Simon made and make gin, schnapps, brandy and whisky, and are now turning their attention to rum, which kicked off into high gear when they installed new distillery apparatus in 2012.  As with the other two companies mentioned above, their primary market remains Germany.

An interesting point of their production methodology is that they use fair trade organic molasses deriving from the Dominican Republic: Tres Hombres ship it to Germany in their sailing ship, and I appreciate that Severin Simon doesn’t use industrial grade alcohol and tart it up to make a throwaway paint-stripper.  Ageing is done in oak barrels made of local Spessart oak, some of which have been charred, some not. Two of the three rums I tried were aged eighteen months, and the current 2015 crop of rums is edging to just over two years, with single-cask and longer aged, higher-proofed rums on the horizon. 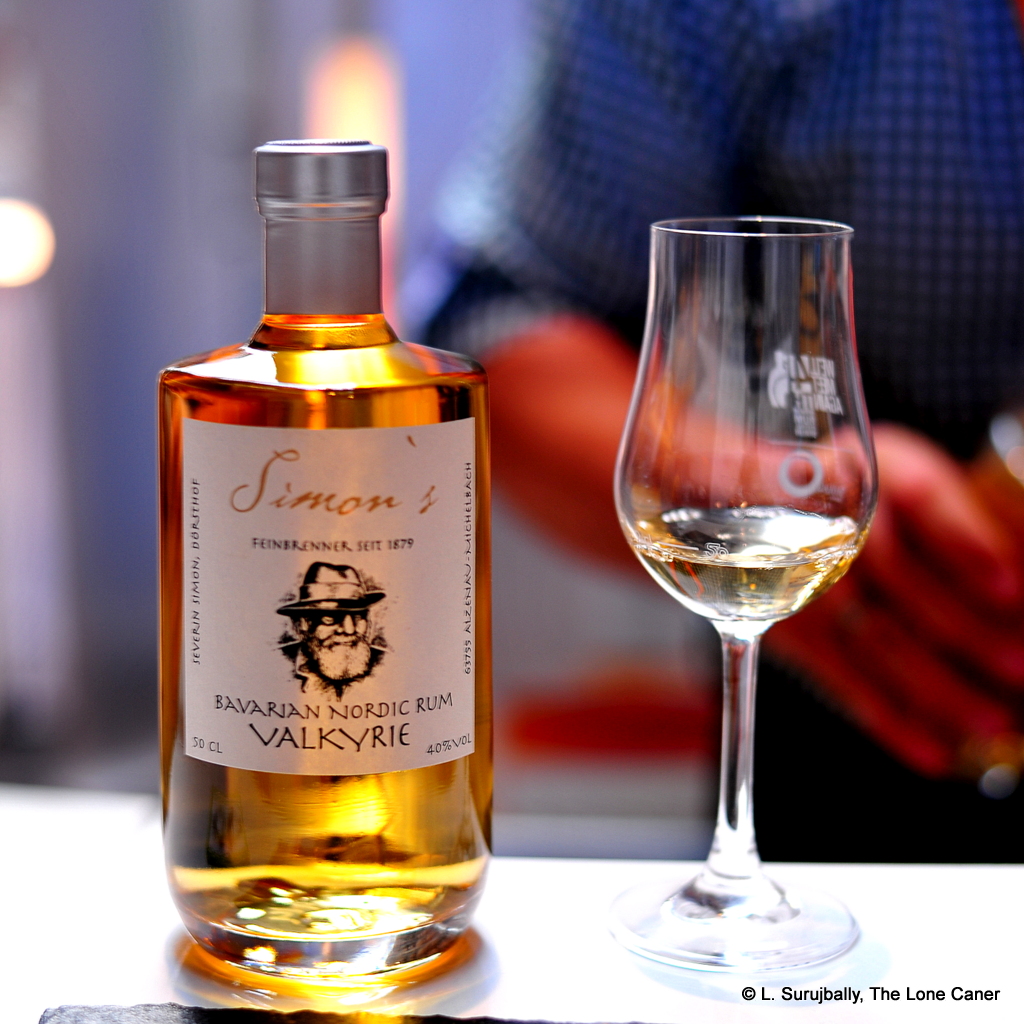 Notes – Pale gold. Pot still. Aged for 18 months in new barrels whose staves and floor were hand toasted.  Non-chill-filtered.  No additives or inclusions.40% for 0.5 L, costing ~€53

Palate – Light to medium bodied.  Unappealingly raw.  This thing should be aged more, I think.  Maybe it’s that local oak used in the barrels. Some raisins, dried prunes, plums, burnt sugar.  Water doesn’t help. It’s that smokiness, the sharper tannins of the oak, asserting too much influence.

Finish – Short and dry. Musty leather, charcoal-fire smoke, raisins and some toffee and caramel, all over rather quickly.

Thoughts – Should be aged for another few years, which I believe is the intention anyway. Given the price tag, do they consider it their premium rum? It’s complex enough, and a decent rum, just too much smoke and ash, not enough of the other stuff I enjoy. Plus, the sharpness needs some toning down, I think. 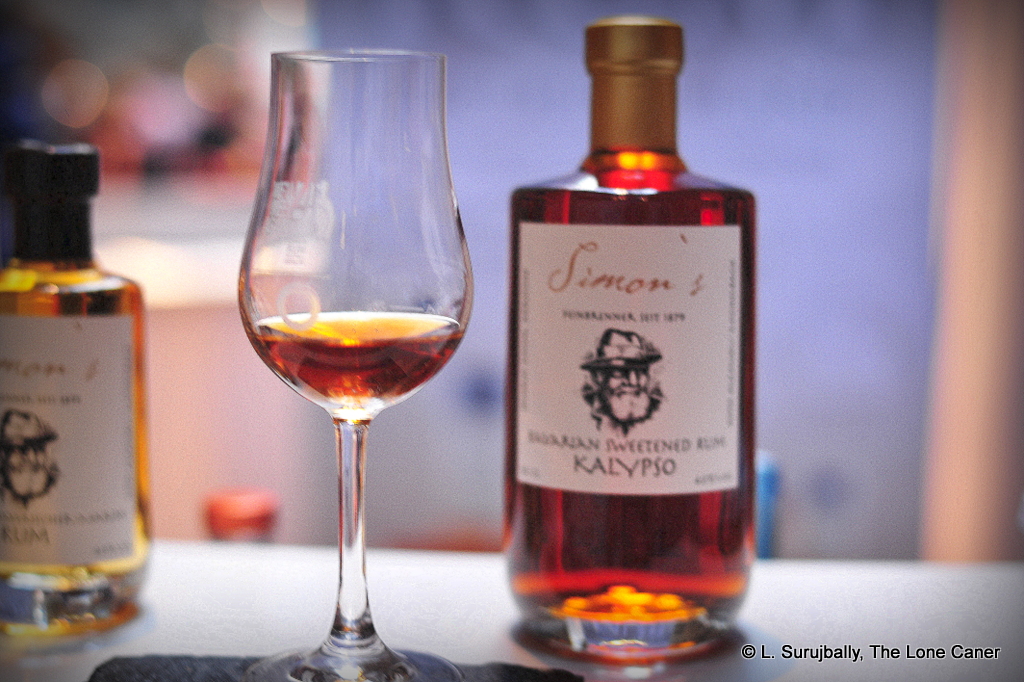 Notes – Colour: amber. Pot still, flavoured rum.  Aged about two years. Darkest rum of the three.  40%, costs ~€48. Simon Severin noted the rum has 50g/L sugar.  Points to them for not dissembling on the matter.

Nose – Why is this thing so spicy at 40%? Oh, okay, it dies down after a few minutes.  Massive and simple taste bomb, this one, mostly vanilla and mocha, with prunes and some raisins at the back end.

Palate – Medium bodied. Spiciness of the nose gives way to thicker warmth. Sweet and redolent of more vanilla, raisins, coconut shavings, molasses, brown sugar, and red cherries in syrup. If you know what you’re looking for (or have good comparators) you can tell this is a young rum, still too uncouth in spite of the inclusions, which help mask – but not eliminate – a lack of well-cut underlying base distillate.

Finish – None too long, nothing special. Mostly more vanilla and some caramel here. Some lemon zest, if you strain a bit. 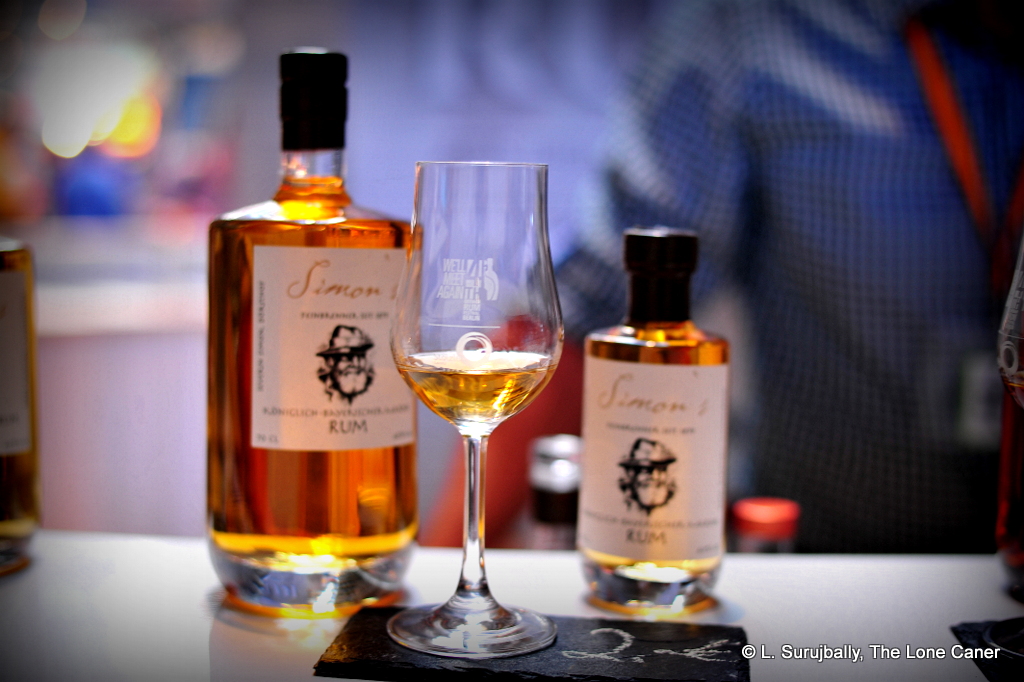 Nose – Rather whisky-like, salty, oaky and herbal.  Smoothest of the three, which may be damning it with faint praise.

Palate – Medium bodied. Citrus emerges from out of the musky background; smoke and woody notes, not altogether masking some burnt sugar, salty caramel and black olives.  Rather spicy, turns arid after a while.

Thoughts – To my mind this one is – by a narrow margin – the best of the three, and the cheapest.  The absence of clearly identifiable sugar inclusions, and the eschewing of charred barrels somehow allows a shade more complexity to sneak in there. It’s a toss-up between this one and the Valkyrie for those who like their smoky background more.

Like Old Man Spirits and their interesting – if ultimately not quite successful – Uitvlugt 16 year old, what we have here is a company still finding its legs in the rum world. Pot still and molasses source notwithstanding, a few more years and tweaking their cuts, ageing profile and barrel selection, and they’ll really have something here.  I’d like to see if they ever come out with a white rum made from cane juice…have a feeling the Spessart oak they use would work some interesting effects there.

Let me just close by repeating something I’ve said before – you have to give points to people who actually make a product and jump through all the hoops to get a company off the ground in a field like rum, in a highly regulated region like the EU; and who provide employment and pay taxes and contribute to the larger rum world. I always and sincerely wish these outfits well, no matter what my rating of their products might be.