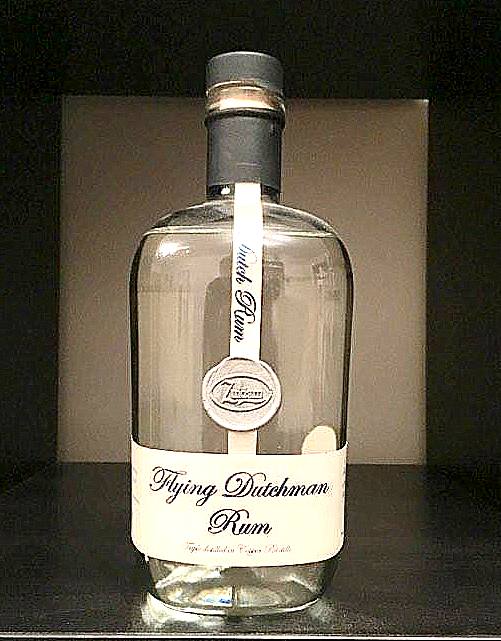 The blurbs about the rum refer to this as being made from “very pure” cane molasses (as opposed to, I’m guessing, very impure or merely pure molasses).  Said molasses are fermented for two weeks using two different yeast strains, triple distilled in copper pot stills; from which the rum is taken at 80% ABV, diluted down to 60% and then laid to rest for a minimum of six months to a year in charred oak barrels before being filtered to within an inch of its life to produce this 40% clear mixing agent.  It’s a relatively new rum on to the scene, coming to market around 2011 or so; and made by a Dutch concern called Zuidam Distillers, established in 1975 by Fred Van Zuidam…his sons currently run the show.  Originally there was  only a small copper pot still and a single production line, but growing business in the 1990s and 2000s allowed them to expand to their current facilities using four copper pot stills and four production lines.  That enabled the company, like so many others, to expand the lineup, which now includes whiskies, genever (Dutch gin), liqueurs and of course, a rum or two, none of which have crossed my path before.

Thinking about the rum itself, I suppose it is meant to deal a bitchslap at the more common white Bacardis of this world by bridging the gap between the milquetoast made by the ex-Cuban company and more feral white unaged pot still products like the ones issued by Martinique, Guadeloupe, Haiti and Jamaica, and thereby snatch back some European market share for such rums.  Certainly it’s one of a very few European distilleries that make a rum at all, and any white rum from a pot still (even if bleached to nothing), may be something to look out for — though why they would name it after a nautical harbinger of doom remains an unanswered, unanswerable question; and why bother filtering the thing is just a plain mystery (I’ve heard that they may eliminate that step in the near future ).

Since the important thing is not these academic notes but whether it all comes together or not in a real tasting, let’s move on. The nose is dry and just a bit sweet, not so much spicy as gently warm. Alas, the notes resemble a surfeit of excessively sugared swank (in that it seems to be channeling an agricole) plus vanilla, something akin to vodka sipped past a sugar cube, though it was reasonably crisp and clear. After some time there were florals, salt, dates, and some estery fumes straining to get out — but never quite succeeding, which is where the decision to filter it shows its weakness since much of the distinctive aromas get wiped out in such a process.

On the palate, bluntly speaking, it fails.  It’s too thin, too watery.  More sugar, mint, some marzipan (are we sure this is a rum, or a gin wannabe?).  There’s nothing standard about this at all, and it’s at right angles to any other white rum I’ve ever tried.  Whipped cream, ripe breadfruit, nail polish, cucumbers in vinegar with perhaps a pimento and some dill thrown in for some kick and to wake up reviewers who’re put to sleep by it.  After adding some water (more out of curiosity than necessity) vanilla, coconut shavings and white chocolate were noticeable, and the best thing about it was the silkiness of the whole thing (in spite of its anemic body) which makes it an almost-sipping-quality white, without ever demonstrating a firmness of taste that might ameliorate the lack of complexity.  As for the finish…meh. Soft, warm and fast, gone so quick that all you can get from it is some warm vanilla…and more of that sugar water, so this aspect was certainly the weakest part of the whole experience.

So no, it’s better to mix, not to have by itself.  I didn’t care much for it, and in short, the rum still needs more work. Above, I noted that it may have wanted to try and straddle the divide between soft white rum pillows and more uncompromising unaged pot still panthers, but what emerges at the other end is really just an alcohol infused vanilla-and-sugar water drink with a few odd notes.  I think there’s some potential here, but for the Flying Dutchman to score higher and win wider acceptance in this day and age, perhaps it might have been a better idea to not only issue it unfiltered, but also bump up the strength a notch.  Then they might really have something to crow about, and excite more of the public’s interest than this version inspired.