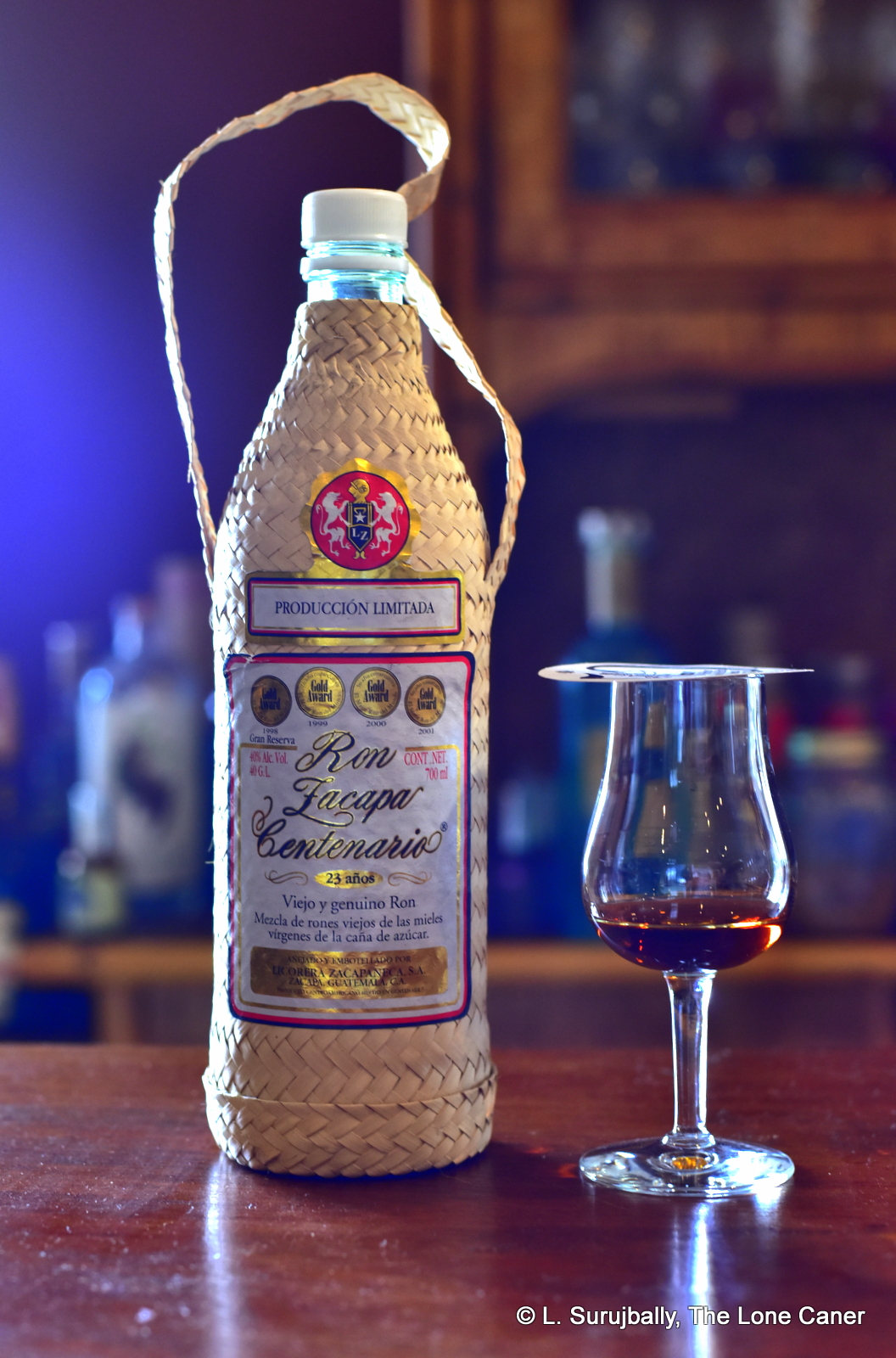 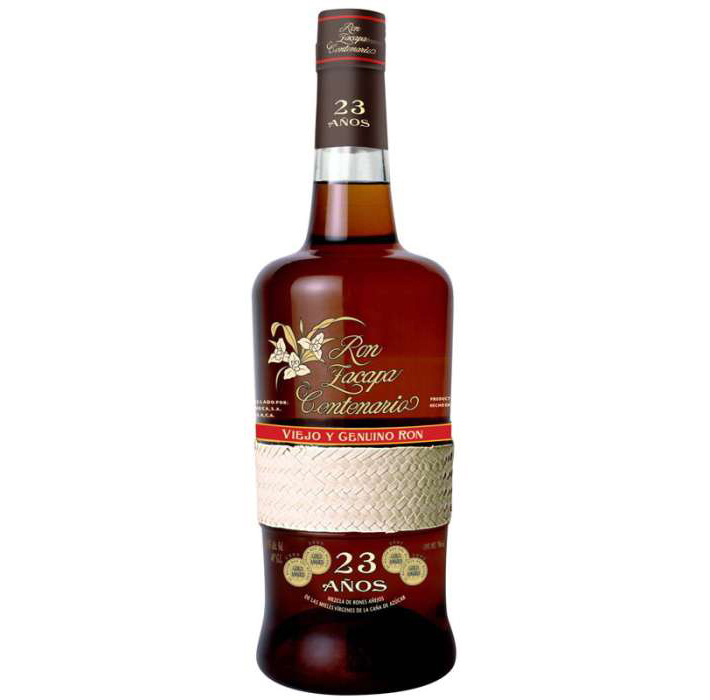 The Zacapa 23 is some kind of touchstone for rum drinkers as a tribe. It consistently appears on Ministry members’ rum lists as a favourite, and garners high points across the spectrum of whole populations, has received unbelievable ratings from international panels and is a perennial reviewers’ favourite.  When I was over at the Arctic Wolf’s lair some months ago and he offered me a try from his collection, it was the Zacapa 23 I asked for.  Some see it as the benchmark by which all soleras are measured.  I’m not one of them, but you see?  The thing is a Marciano of rum, consistently punching above its weight.  For a solera that’s unusual.  For its price, that’s nothing short of amazing. What makes this one rum from Central America, from a company that makes almost nothing else of such note (unless it’s the 25) such a standout?

Well, let’s start there.  Ron Zacapa is made in Guatemala, in a small town appropriately named Zacapaneca, by the Industrias Licoreras Distillery. It has two points of difference that set it apart from more traditional Caribbean rums (although to consider Guatemala a “Caribbean” nation is to misunderstood a term which has more cultural than geographical implications) – one, it is not made from molasses but sugar cane juice (thickened by boiling to a honey-like consistency), and therefore has more in common with the agricoles of Martinque and Guadeloupe, and two, it is aged by the solera method used in sherries, a trait it shares with the Venezuelan Santa Teresa.  In this instance, literature available online advises me that the blend in the 23 is a mixture of rums aged 6 to 23 years, and is then further aged in white oak barrels.

Previously, the Zacapa had an age statement (23 anos) printed on the bottle, front and centre; however, since Diageo took over the distribution of the product, a more reasonable “23 Solera” has replaced this, and that makes more sense, otherwise confusion results (remember the Flor de Cana 21 which isn’t a 21 year old?). The bottle itself has a neat little palm leaf wrapping around it, and has a well seated cork: I’m a little ambivalent about corks these days – it’s the seal I’m after, as well as a lack of degradation of material – but I always have a soft spot for real old-school stuff, so this one worked just fine for me.  All in all, then, there is an aura of professionalism about the whole thing.

Decanted, the rum displays surprising body in the glass for something so apparently light, and has slow and strong legs down the side of the glass. Yet the nose is soft, missing being delicate by a certain muscularity that reminds me of the grace and strength of a ballet dancer: it is smooth in character, with hints of cocoa, caramel and a dusting of cinnamon and vanilla.  Nuts, perhaps, and after a bit I could swear I smelled cherries. It lacks the pachyderm heaviness of the El Dorados, and it seems just about right that it be so – this is a rum where the colour and the nose match precisely.

And where the taste does not let one down, I should add.  This thing is smooth and very slightly dry. Sweet. Perhaps a little too light on the body, but like the sugar, it’s a personal thing (I like slightly darker, heavier rums, a tad sweeter than some, which in no way detracts from my enjoyment and appreciation of one like this). And on the palate, excellent…I mean, really, really good. Hints of that same cocoa-vanilla blend, honey, caramel and burnt sugar, the very faintest smidgen of something like citrus, all in some kind of harmonious balance, a coming together of all parts that made me understand why people have been drooling over it for years. To my surprise, there is almost no bite at all, no sting, no claw, no scratch.  It’s not on the level of smoothness of the heavier Pyrat’s 1623 or the El Dorado 25, but then, it’s not a liqueur like the former either, and not a seeming wannabe like the latter.  The 23 coats the tongue and lasts for seeming small cycles of the universe, before gently letting go and passing into a fade that makes you want to pour another shot immediately.

The fade is the third leg, and it keeps up.  It does not drop the ball – unlike the Mount Gay 1703, I would say, if pressed for an opinion – by having that last departing bat of the cat’s claw on the way out.  It simply wafts up fumes, strokes your throat in zephyr breezes on the way down, and you swallow and look at the glass and wonder where your two ounce shot just went and why the bottle is suddenly half empty.  My father in-law (him of the Russian rotgut preferences, remember him?) isn’t a rum dude, but he simply adored this one; for a guy who at 72 rarely takes more than one sip for face (honour and duty must be maintained when in my house, so refusing is considered rude – same way I am unable to decline the sheep’s eyeball when at his), he immediately asked for another…and then another.

Note the rums to which I compare this lovely product.  All of them are north of a hundred bucks, sometimes two.  All of them are marketed as ultra premiums.  All are aged blends with large age statements (except Mount Gay and the Pyrat’s).  Yet this Zacapa 23, blended from rums containing a range of rums the oldest of which is 23 years old, holds its own without ever seeming to try (much like the Juan Santos 21).  It cost me the equivalent of sixty bucks from a friend who brought it in from the UK as a favour.  Even the Juan Santos clocks in at around ninety in Alberta. Value for money?  Ron Zacapa may have hit the sweet spot here.

It’s instructive to compare the Zacapa 23 to the Pyrat’s Cask 1623 which I angrily skewered not too long ago. I mentioned my disappointment with its overwhelming citrus taste that at the premium level should have been moderated and better balanced and that it was a forty dollar rum in a hundred dollar package selling for two hundred.  Ron Zacapa is almost exactly the opposite: all elements come together like a swiss watch, no one flavor overcoming or dominating any other; and while it may not be a two hundred dollar rum or come in a hundred buck package, it sure as hell doesn’t cost either of those numbers either.  For what you are paying compared to what you are getting, I stand here in front of you and state it flatly: this rum has one of the best quality to price ratios of any kill-divil it has ever been my pleasure to sample, and sweet or no, it’s good.  If it ever comes to Alberta again, I’m getting me a some more. And looking out for the 25.