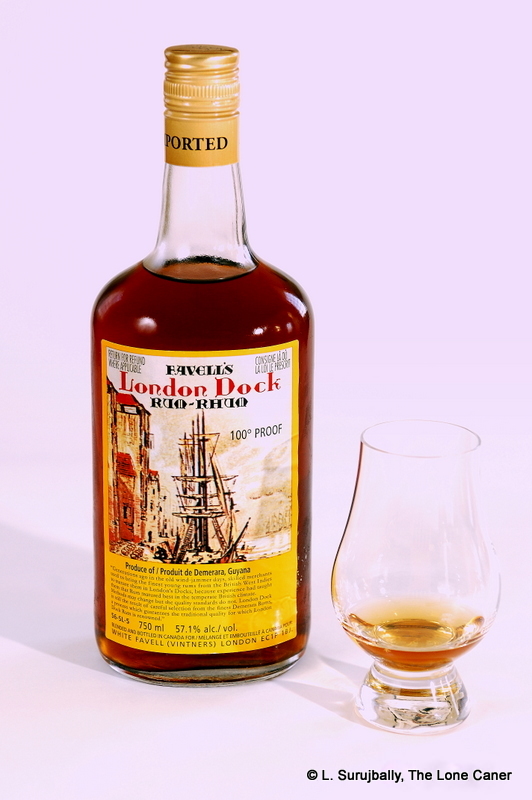 An overproof harking back to maritime days of the Empire, Favell’s lacks enough ageing or serious taste to compete with more carefully made and better aged examples of the craft, and will appeal more to whisky drinkers who like cask strength offerings, than those who like lesser strength rums to sip neat.

Favell’s London Dock Demerara rum plays on the maritime heritage of the British empire’s trading  days: sailing ships, foggy stone wharves, the slow slap of the waves against the wooden hulls of old windjammers and clippers anchored alongside, and West Indian Trade in rum and molasses. Even the labelling reflects a slightly old-fashioned, nautical slant, what with its picture and the interesting notation that it is 100 proof rum…or 57.1% (for a discussion on why 100 proof in Britain is – or used to be – 57.1% alcohol by volume, see my article on proofs here).

Favell’s is, like other rums made in northerly climes, a blend of stock imported from the West Indies (Guyana, in this case) and again, this is stated front and center in the label: Demerara rum, product of Guyana.  In the 19th century the British empire had its largest trading hub in London, and in 1802 an entire new section of the Port of London, the West India Docks, was built to process the vast amounts of sugar and rum arriving from British colonies in the Caribbean. The Rum Dock section gave birth to Lamb’s London Dock and other rums of that period, but whose names have long vanished.  These days, only the term remains, redolent with history.

At 57% ABV, Favell’s is a proof rum (100 proof – anything over that is considered an overproof): we might term it cask strength, if that wasn’t technically incorrect.  There are frustratingly few notations on the distillation methodology available.  About all I can tell you is that the bulk rums come from Guyana, and the blend is made in Canada under license to White Favell, Vintner’s of London, who probably act like Gordon and MacPhail or Bruichladdich, but without the fame. The nice thing is that, like Screech and Old Sam’s, it’s made in Newfoundland, and that probably had something to do with the long maritime tradition of The Rock (or so the romantic in me supposes). 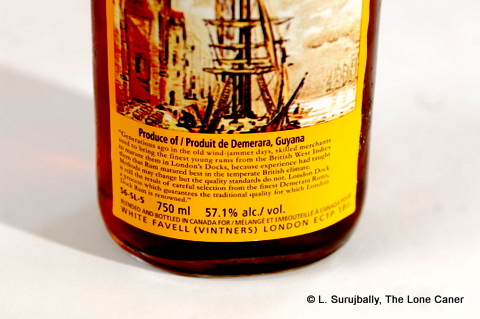 The nose was, as one might expect, not gentle or forgiving.  London Dock rums as a general rule adhere to Navy blending traditions, which is to say they are rough and dark and strong and have tastes are at best unsophisticated.  This one was no exception, and at 57.1%, I wasn’t surprised. It smacked the nose and was redolent of harsh spirit, caramel and some vanilla.  A bit sharper than I personally preferred.  After opening up, however, the alcohol vapours started to recede and a lighter, thinner floral scent stole about the overpowering depth of dark sugar, and I have to acknowledge that if you’re prepared to wait a bit, that almost makes it worthwhile.

However, to my disappointment, the taste failed when compared with either Pusser’s, or the A.D. Rattray’s rather excellent 13 year old Caroni rum, which are the only overproofs I’ve sampled that came close to Favell’s. The sharp taste is not medicinal, precisely (I would have marked it down for that), but it does bite like hell, and not the dark deep burn of a good, mellowed-down, well-aged overproof, but something harsher, less refined: something that required a bit more time in the barrel, I’d say. The rum was decently full-bodied as befits a Demerara rum – the problem was that the taste was not distinct, not particularly complex, or well-defined.  Oh you get the caramel, some faint burnt sugar notes, together with a trace of molasses. That’s all, though.  And the finish , well, it does linger, powerfully so…but one feels that those are mostly the alcohol fumes with some faint hints of the aforementioned standards, and so not particularly distinguished.

That this rum has absolutely nothing to do with the glory days of the British Navy and all its associated traditions is not in dispute.  It’s a pretender to a throne to which Lamb’s Navy rum and Pusser’s stand rather closer in the line of succession and merit. But I wouldn’t exactly mark it down for that either.  These days, I assume marketing swamis and smart people who study people’s tastes and how to sell things to people are usually behind the branding of any rum I review (and if any doubt my statement, feel free to weigh in on the discussion on the Ron de Jeremy slated to be produced this year): and so I don’t really hold it against them.

Favell’s is, to my mind, a success from the perspective of imagination.  I can surely, without effort, think of having a flagon of this at my side as I watch the last of the cargo being loaded onto my old sailing ship bound for Port Georgetown, the hawsers creaking as the tide comes in, the fog swirling around the dimly lamp-lit quay and muting the low conversations of the  sailors as they batten the hatches and make ready to cast off all lines.

Too bad that the taste and overall quality of Favell’s doesn’t quite live up to that promise. Close, but not quite.