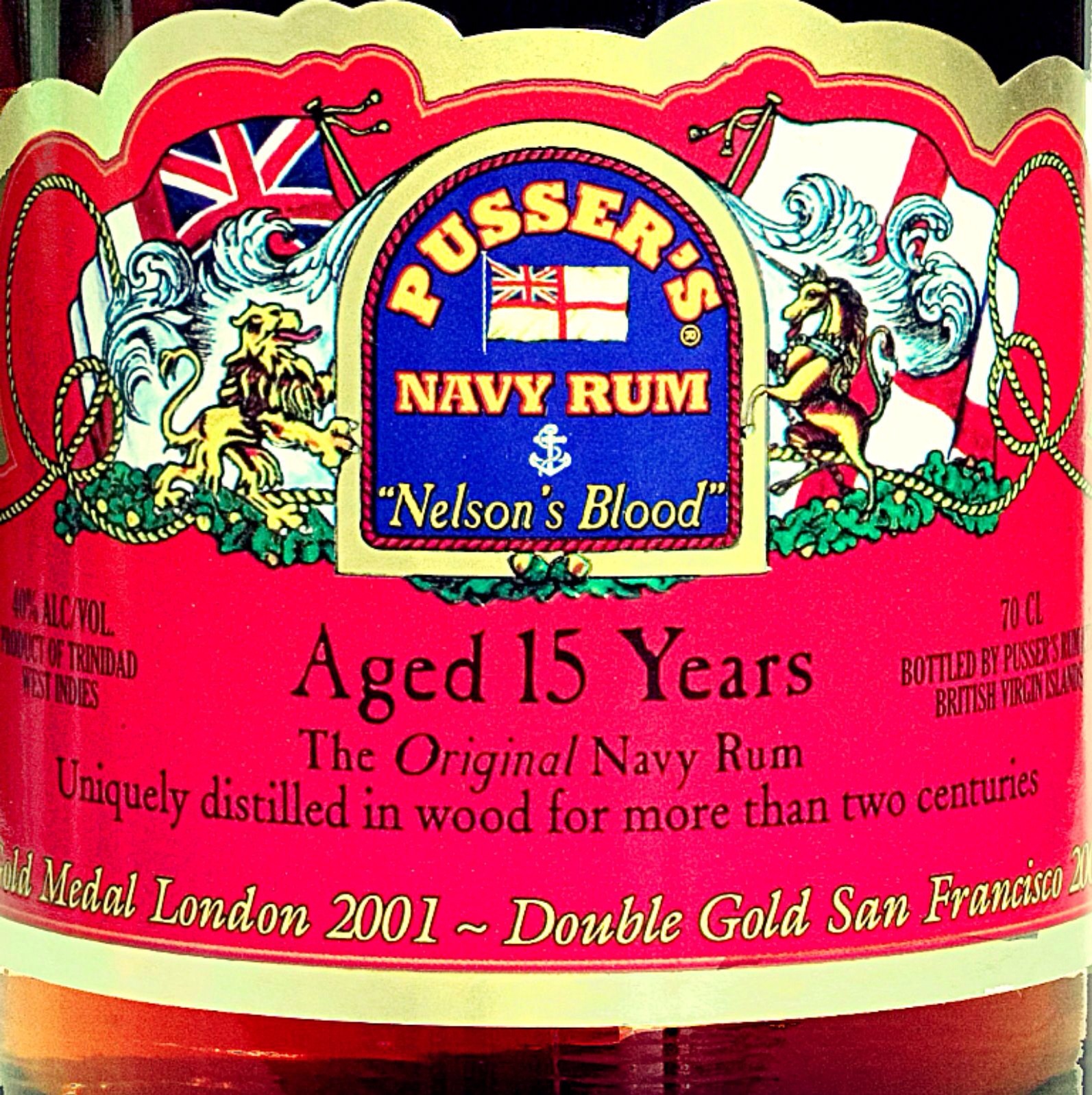 A solidly impressive aged product from Pusser’s. Though it’s “only” 40% ABV, you might compare it to a barbarian using a fork – snickering, but all the while appreciating the strength and the quality.

West Indians probably snigger into their shot glasses in every beer garden, corner store or rumshop whenever the name of this Navy-style rum comes up.  In fact, I’m pretty sure of it, and if you don’t get that, find a guy fresh off the boat or the plane and get him to explain it to you.  Like many Caribbean bon mots, it’s about as subtle as a charging rhino.  Yet, there’s no denying either the pedigree or the impact of the rum itself. It’s a powerful strong concoction not overly mucked about with. Rums like this have names like Maxwell, Clarence…or Brutus.

That ambivalent phrasing pretty much sums up my attitude towards Pussers, towards which I have an on-again, off-again relationship (much like I do with Clement XO).  At one moment I appreciate its marketing, its unapologetically and brutally minimalist presentation and its take-no-prisoners if-you-can’t-hack-it-you’re-a-wuss flavor.  At others I simply blow it away as something not subtle enough, not refined enough.  I’m inconsistent that way sometimes. My friend Keenan, who hails from the Maritimes, quite liked it, by the way, and so do a few others I know.

Pusser is a corruption of the word Purser, a name given to that worthy gent on each ship in the Royal Navy whose job it was to hand out the rum ration in the days before Black Friday in July 1970, when rum was officially banished from aboard all vessels of war. The company that makes it, Pusser’s, bought the recipe and stills from the Royal Navy and launched themselves into business, and may reasonably be said to make the rum closest to what navy rums really were back in the old days. Characteristics include overproofing, not very sweet, dark and heavy body and minimal – if any – additives.  In that way, it’s very much like the Cadenhead Green Label or Demerara rums I’ve tried.  Lamb’s Old Navy, Sailor Jerry, London Dock and Wood’s all have claims (some say pretensions) to the title of Navy Rums, but my feeling is that Pusser’s got it.

The rum is aged for 15 years in ex-bourbon barrels, and various sources have suggested that the blend that is aged comprises four rums: portions of Jamaican, Bajan, a bit of Trini, and a hefty dose of a Guyanese rum, which immediately implies (to me), DDL – because they are the only ones left making rum from wooden stills which is a Pusser rum claim to fame as well. Some have said five rums, but I’ve been unable to confirm this: Pusser’s doesn’t give out too much in the way of details, and in any event, the blend of Navy rums never really stayed stable but was often tweaked and recalibrated over the centuries.

All this history is fine, you say, but do you mind? Get to the rum itself.

Well, there’s the bottle above.  Squat, unadorned, in your face (a bit like the much more refined English Harbour 10 year old).  The label is somewhat at odds with its proletarian cachet, what with all those bright red and blue colours, and again you think of that dancer (just sayin’…).

The liquid within was dark, as befits a Navy rum, and poured out like a young El Dorado on steroids. The thing had medium legs, and a pungent nose that almost invited further exploration.  You’d think that something so aimed at the drinking classes would have a straightforward bouquet that didn’t frig around and advertised its forthcoming palate simply and directly, with a minimum of fuss and bother.  But that wasn’t so at all.  I took a sniff, wasn’t too impressed, and was about to make snotty notes and grumbling remarks, when the flavours started coming through the air and I realized that this fifteen year old Jolly Jack Tar had quite a lot under its leotards. A full, rich and earthy scent – quite spicy, let me note right off – redolent of cocoa and a hint of vanilla, and dark brown sugar marinated just enough in oak to get that slight bite.  Maybe some cinnanmon played around in the background there, but whatever it was, it made for a more complex nose than I had started off with.

The arrival on the palate is neither smooth nor harsh: powerful, though, quite impressive for a 40% rum.  You get the sense of strength barely held in check from being rotgut moonshine by the blender’s art. I was tasting dark caramel and chocolate, cinnamon (there it was) and baked apples.  Some citrus and maybe sherry. And, alas, the woodiness and spiciness of ageing not entirely mitigated by skilful blending.  This was not enough for me to seriously mark it down, but it was noticeable, and if your preferences are for more flavourings rather than minimalism, more sweet rather than less, then this may not be the rum for you.  I’m no expert on the obscure Scottish drink, but I thought that here was a rum that actually had more characteristics of an aged whisky or a cognac, though it probably is too sweet for the purists and cognoscenti.

The finish was perhaps the least impressive thing about it – however, given how high a position it started from that’s not to be read as an indictment of what is really quite a unique drink – it was medium long and a little too harsh for me, especially after what I had considered a very good beginning, but of greater than usual richness and warmth. The viscosity of the rum was enough to make the finish last – I just didn’t care too much for what it was that lasted.  But at end, this is a matter of the spiciness rather than any intrinsic quality, and by most standards, I’d say Pusser’s 15 year old rum is a solidly top-of-the-middle-shelf product, to be had either neat or in a cocktail, and enjoyed either way. It’s rich, it’s complex, and only my personal preferences make it slightly less than a winner.  Most reviews I’ve read drool over the product.

Over the years I must concede to being somewhat won over by rums stronger than the standard and near-ubiquitous 40% (this is not one of them, being bottled at the standard forty).  The flavours are stronger, more powerful: even a small shot attacks your palate like a tiny hammer of Thor, and as cocktail mixers they are beyond compare for the same reasons.  Pusser’s great virtue is its complexity of flavour and strength of taste you get for a standard strength rum – you’ll go far to find something quite like this, overproof or not, and again, I can only mention the Cadenheads or the Renegades as comparators. Any time I feel like being smacked around by a spicy, muscled beefcake of a rum which proudly struts its stuff, Pusser’s isn’t far from my mind.