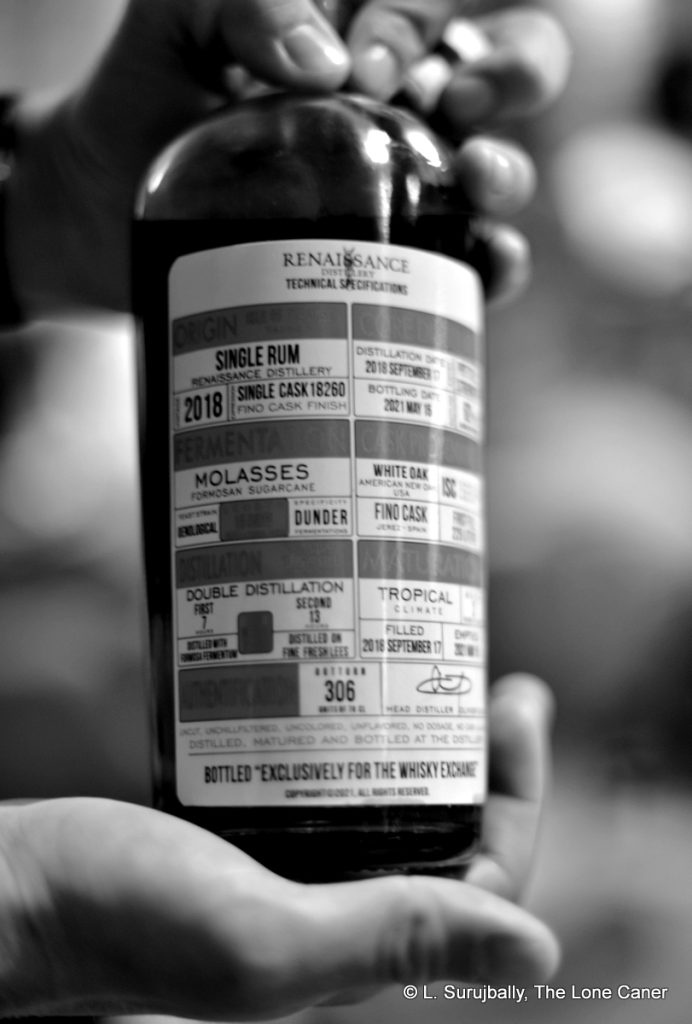 I’ll provide some company background below this review; for the moment, it’s enough that we know the 2017-established company has a 500L steel pot still and a more recently added 1200L copper Charentais still.  Sources for the wash are both molasses and juice derived from their own small estate cane; fermentation varies and can take 15-21 days if from juice, and at least 10 days if from molasses; double distillation is practised and ageing is done in a variety of barrels sourced from France, Spain, Russia, Japan and the US.  The sheer variety of the production methods they indulge in probably explains why the company has made it a hallmark of its labelling ethos to provide a level of information on the rum in each bottle that would make Luca Gargano weep with envy and frustration and for which us geeks can only be grateful.

Not many of Renaissance’s rums are as yet easily or commonly available and their production remains relatively small. The rum we are discussing today is a 2018 double-distilled 3 year old rum, and in relating the tech specs you realise that this is where that bible of a label, that ‘wall of text” comes into its own.  The rum is molasses based, 15 days fermentation with some dunder, aged in a new 225L American oak cask and then finished in Fino sherry cask (Fino is a dry sherry), 306 bottle outturn and 62% ABV…and just from those details you can tell how much the label provides (I have left out quite a bit, to be honest because sometimes there is such a thing as overkill, though I’m glad to get all this too).

Anyway, the rum’s production background suggests a rich experience, and indeed, the profile is really quite interesting. The nose for example, opens right into licorice, blackcurrants, some medicinals, flortals, light delicate perfumes, vanilla and some crisp citrus notes. Underneath those aromas is something a bit softer and muskier: flambeed bananas, salt butter, the vegetable aromas of a hot and spicy miso soup leavened with ripe mangoes and lemon peel. It’s solid at 62%, though thankfully it stops short of serious aggro. 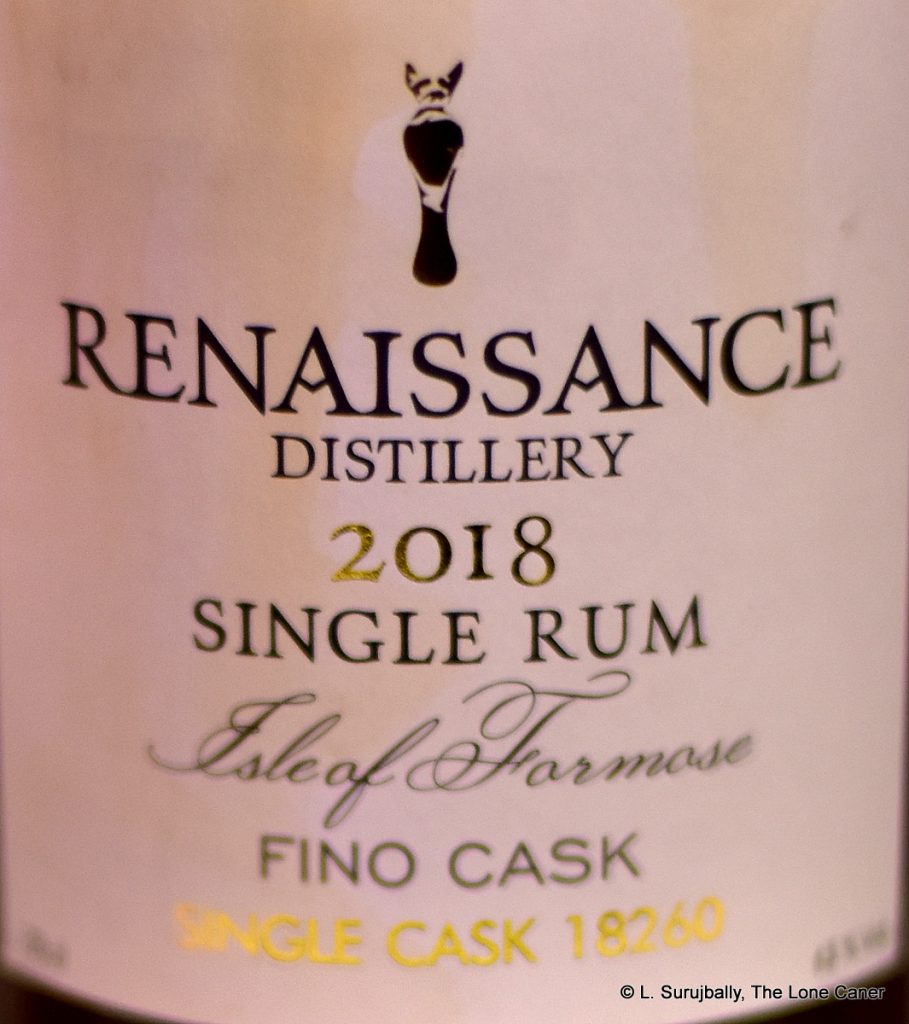 The palate was just similar enough to rums with which we are more familiar to make the occasional diversions interesting and singular, rather than off-putting. There’s som blancmange, salt caramel, bananas, licorice and almonds, all at once.  This is followed, as the rum opens up some, with sharper and quite clear citrus and floral notes, some burnt bell peppers, chocolate oranges, unsweetened chocolate coffee grounds and – peculiarly – even quinine comes to mind (and I should know). There is some faint sweet spiciness at the tail end which bleeds over into the long finish – this is mostly cloves, ginger, licorice – but at the end it’s fruity with raspberries and some syrup, honey and brine.

Well, labelling is one thing and presentation goes hand in had with it, so it talks well, but based on what I’ve described, does it walk? Opinions are mixed.  All in all, there’s a fair bit of hop-skip-and-jump going on here and perhaps its inevitable that with a rum being this young and with all those processes in its DNA, it would be a little uneven. The Fat Rum Pirate, in one of the best reviews so far, suggested this very aspect, wondered what it was like without the Fino finish, and rated it three stars (out of five). Will and John of the Rumcast named this one of their rums of 2022 (in the “most surprising” category at 1:11:28) and Will remarked that “if a high ester Jamaican rum and a Fijian rum walked into a bar and had too much sherry, it would be this rum” but stayed clear of making either a full throated endorsement or a dismissal. The originality was clearly key for Will, as it was so unusual. Serge over at WhiskyFun commented on it being “big,” that he didn’t get the finish, couldn’t say it was brilliant…but surely worth checking out.

That’s really what I come down to as well.  It’s unusual, in a good way. While some more ageing would likely make it better, it may be too early to ask for that: as with many small up and coming distilleries who need to make cash flow, young rums is what we’re getting (the Australians were also like this, as are some of the new American craft distilleries).  The rum does channel a bit of Jamaican, and combines it with something softer and easier – a Barbadian or Panama rum, say (Serge said Lost Spirits, which I thought was a stretch) – and what it reminds me of is, oddly enough, Montanya’s Exclusiva, which scored the same. The Renaissance gains points for somewhat different reasons, but it remains in the mind just as Montanya does — and all I can say is that I just wish it was cheaper. 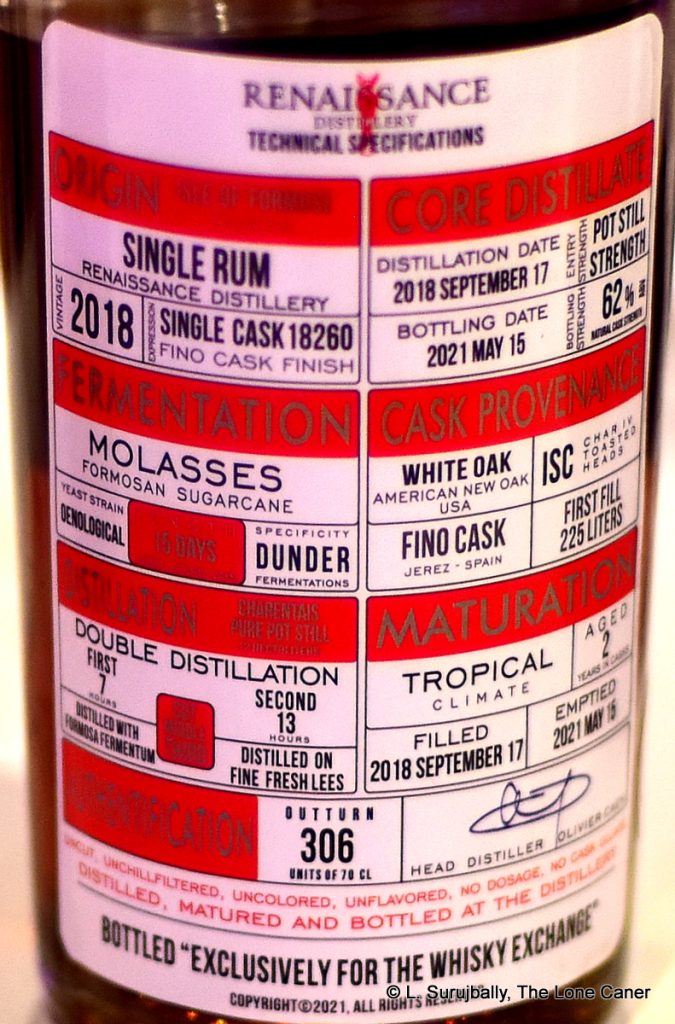