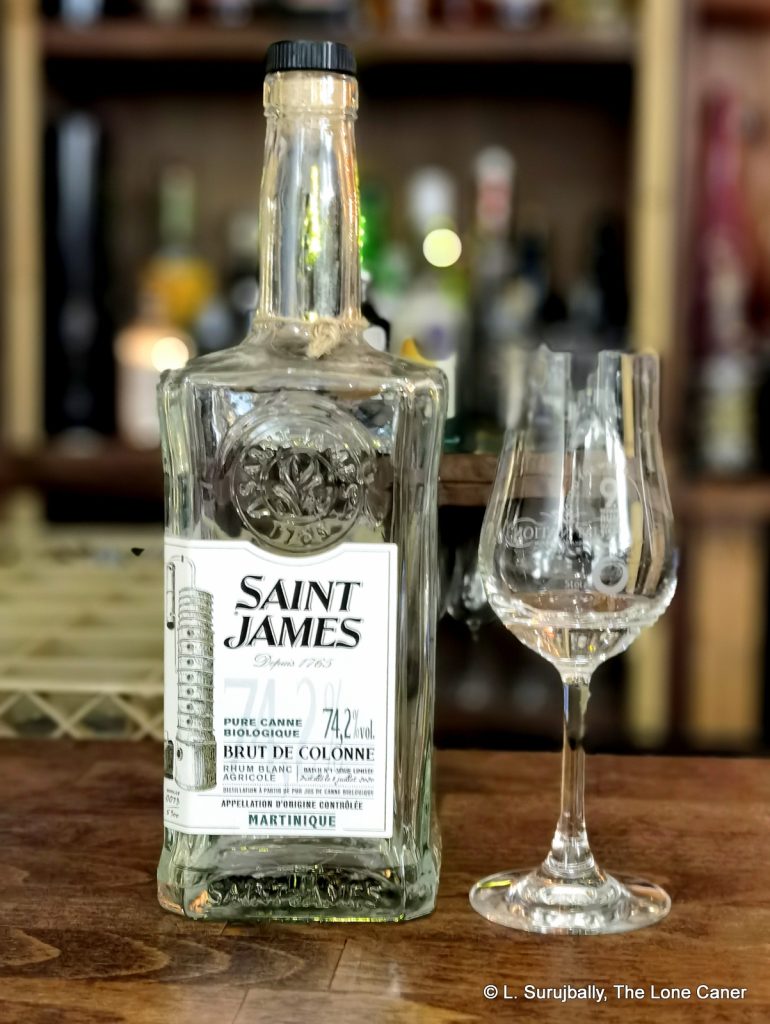 To drink the still strength, high proofed “Bio” that Saint James distilled in July of 2020, is to be reminded what a distiller at the top of his game can do without even ageing his product.  Yes, they’ve made the pot still white I was so impressed by in 2019, but to try this 74.2% growler immediately afterwards (as I did) is like running the bulls in Pamplona in one year…then coming back later when all of them had been replaced by a particularly aggressive bunch of wild Kenyan Zebus that had been fed a diet of diced tigers and enough steroids to father a nation. It’s that kind of experience.

Here’s a rhum that ticks all the right boxes, and then some.  It’s a parcellaire micro-terroire rhum made with full attention to organic production methods, run through a column still and bottled as is – no ageing, no addition, no reduction. What you’re drinking is what comes dripping off the still.  It’s fierce, it’s savage, it’s tasty and as far as I’m concerned, the best unaged white I’ve ever tried…until I find the next one.

This kinetic whomp of proof hits you in the face right from the moment you pour the first shot, and so honesty compels me to suggest you give it a few minutes to settle down, because otherwise it bucks like an unbroken wild horse with half a pound of cayenne under its tail. And when you do sniff, its huge: brine, sweet soya sauce, cane sap, wet grass, and not just bags of fruit but whole sacks — pears, watermelon, papaya, guavas, apples, sweet Thai mangoes. It morphs over time and additional smells of iodine, smoked salmon, lemon juice and dill come to the fore, and more lurks behind in a sort of aromatic clarity and force we see all too rarely.

And this intense panoply continues on the palate as well. That it is lip-puckeringly intense will come as no surprise, and once that is over and done with and one adjusts, the rich parade of flavour begins and the rhum becomes almost soft: it starts with damp earth, brine and olives, continues onto vegetal herbs, grass, dill, rosemary, then becomes clearer and crisper with cane juice, crushed walnuts, lime leaves (a lime cheesecake is what I kept thinking of) and glides to a precise finish that lasts what seems like forever, a finish that is dry, fruity, sweet, salty, overall delicious…and possibly the best rumkiss of my recent memory. 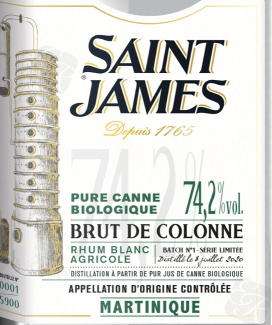 What a magnificent, badass, delicious rum this is. Rums I like or want to get deeper into are usually kept on the go for a few hours: three days later this thing was still in my glass and being refilled, and I was guarding it jealously from the depredations of Grandma Caner who kept innocently edging closer, twitching her fingers and trying to filch some. Everything about the entire profile seems more intense, more vibrant, more joyful and it’s a treat to just smell and taste and enjoy when one has more than just a few minutes in a tasting someplace.  Initially, when I had sampled this rhum at the Rum Depot in Berlin I had been impressed, and bought a bottle straightaway, yet with the time to really get into it without haste or hurry, I appreciated it even more the second time around.

And it also upstages what I thought were other pretty serious pieces of work – Saint James’s pot still white, William Hinton’s Limitada and A1710’s Brute 66% to name just three. My serious opinion is that the beefcake of “Bio” points the way to rhums we may hope to get in the future; to try it is to be shown one of the most overwhelming, intensely tasty experiences that one is likely to have that year. And believe me, I honestly believe it’ll be worth it. 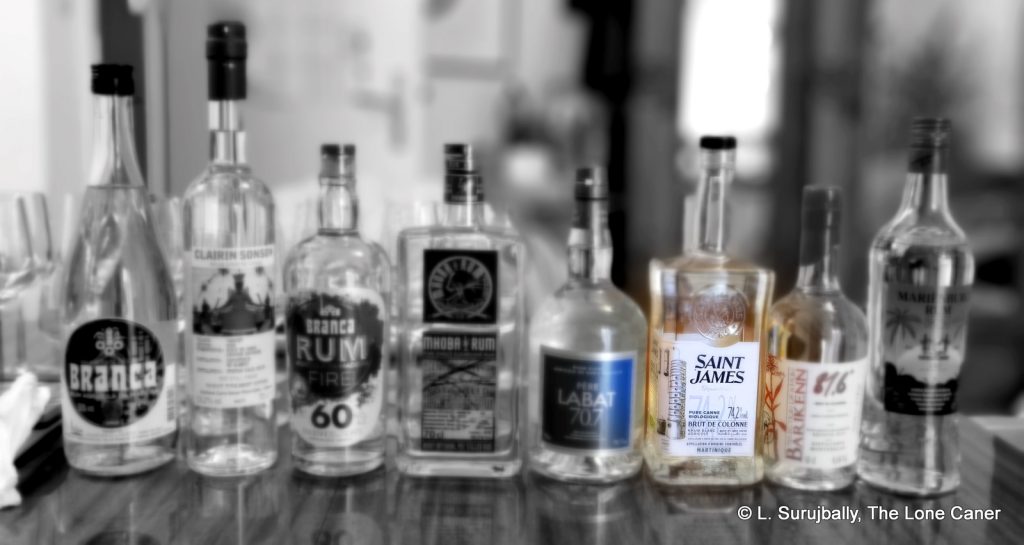 Some relatively new trends in modern rhum-making that this rhum epitomizes, is perhaps necessary in order to place Saint James’s “Bio” rhum in perspective.

One is the micro-terroire parcellaire approach to rhum production, where cane from a single small parcel or field or area of an estate is identified and harvested, and a rum (or rhum) made from that one area. Usually this is an experimental and limited run, meant to show off the characteristics a master distiller feels is characteristic and unique within that small plot of land. These days, most of the work in this direction appears to be coming from the French Island rhum makers like Neisson, HSE, A1710, Saint James and others like Renegade in Grenada, but for my money the first may have been the UF30E, if not the clairins from the micro-producers of Haiti.

This minimalist, small-batch approach also lends itself well to an emergent strain of sustainable, ecologically sound, carbon-neutral and environmentally friendly, organic or “bio” rhum production — which is still in its infancy, for now, yet gaining in importance and credibility. For rums, the term “certified organic” (and its variations) is not a mere catchphrase and marketing gimmick but refers to standard of production that today’s younger consumers take very seriously. Sales are built on such concepts.

And then there is ever-evolving rum-connoisseurship of the drinking classes, which, while once being perfectly happy with rhums and rums topping out at 50% ABV, now seems eager to go to the screaming limit. This leads to the curious (and occasionally amusing) race to the top of the proof pyramid to satisfy such demand, by producers – not all, but some. Ten years ago it was only independents and whisky-making rum bottlers who trafficked in such high ABV rums (151s were exceptions, for other reasons), but in the last couple of years the amount of rums issued north of 70% has ballooned and forced me to re-issue the Strongest Rums list not once, but twice, as new entrants kept getting added.

All of these aspects go into making the “Bio”, and may, as I remarked above, be a harbinger of rhums and rums to come. Cane juice is already considered a way to premiumize and mark out one’s products (high esters and “Jamaican methods” are another), and increasing proof combined with smaller production, limited-edition runs is here to stay.  Maybe they will not go mass market, but for smaller distilleries they can sure boost the margin and the sales in a way the bigger global producers can’t.