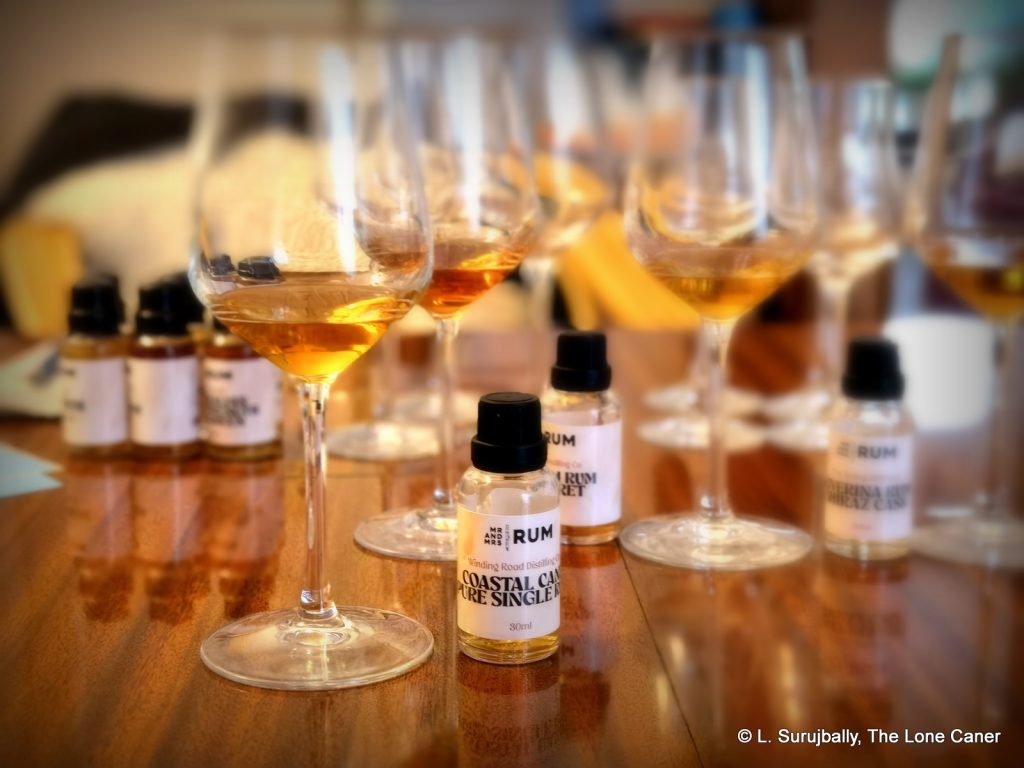 Distilleries that go off on their own tangent are always fun to watch in action. They blend a wry and deprecating sense of humour with a quizzical and questioning mien and add to that a curiosity about the rumiverse that leads to occasional messy road kill, sure…but equally often, to intriguing variations on old faithfuls that result in fascinating new products. Killik’s Jamaican rum experiments come to mind, and also Winding Road’s focus on their cane juice based rums1, like they were single handedly trying to do agricoles one better.

Moving on from the standard proofed rums from Australia upon which the focus has been directed over the last weeks, we begin to arrive at some of those that take the strength up a few notches, and when we bring together a higher proof with an agricole-style aged rum — as uncommon in Australia as almost everywhere else — it’s sure to be interesting. Such ersatz-agricoles rums are the bread and butter of the Winding Road Distilling Co in New South Wales (about 175km south of Brisbane), which is run by the husband and wife team of Mark and Camille Awad: they have two rums in their small portfolio (for the moment), both cane-juice based. The first, the Agricole Blanc was an unaged rum of this kind, one with which I was quite taken, and it’s the second one we’re looking at today. 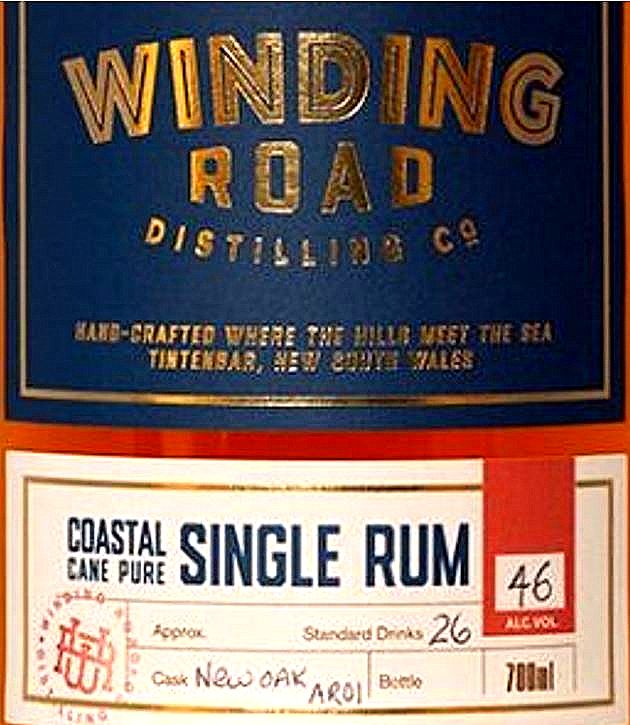 It’s quite an eye-opener. Coastal Cane Pure Single Rum is rum with the source cane juice coming from a small mill in the Northern Rivers area (where WR are also located), and as far as I know is run through the same fermentation process as the blanc: three days in open vats using both commercial and wild yeasts, with the wash occasionally left to rest for longer (up to two weeks). Then the wash is passed — twice — through their 1250 litre pot still (called “Short Round”) and set to age in a single 200-litre American oak barrel with a Level 3 char, producing 340 bottles after 31 months. Bottling is then done at 46% in this instance: that, however, will change to suit each subsequent release based on how it samples coming out of the ageing process.

Mark Awad’s avowed intention is to produce a distillate that combines the clarity of agricole rhums with a touch of the Jamaican badassery we call hogo, as well as representing, as far as possible, the terroire of NSW…specifically Northern Rivers, where they are.  I can’t tell whether this is the rum that accomplishes that goal, but I can say it’s very good. The nose is lovely, starting with deep dark fruits (prunes and blackberries), opens up to lighter notes (bananas, oranges and pineapples) covered over with unsweetened yoghurt and feta cheese. There’s a nice low-level funkiness here that teases and dances around the aromas without the sort of aggressiveness that characterises the Jamaicans, combined with floral hints and – I swear this is true – smoke, wet ashes, and something that reminds me of the smell on your fingers left behind by cigarettes after smoking in very cold weather. 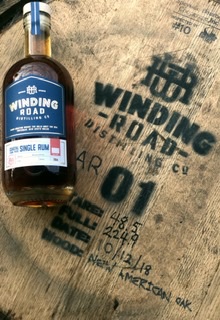 The barrel influence is clear on the palate – vanilla, some light caramel and toffee tastes are reminders that it’s not an unaged rum. But it’s also quite dry, not very sweet in spite of the lingering notes of lollipops and strawberry bubble gum, has flavours of brine and lemon-cured green Moroccan olives, and brings to mind something of a Speysider or Lowland whisky that’s been in a sherry cask for a bit.  It’s one of those rums that seems simple and quiet, yet rewards patience and if allowed to open up properly, really impresses. Even the finish has that initially-restrained but subtly complex vibe, providing long, winey closing notes together with very ripe blue grapes, soft apples, brine, and a touch of lemony cumin.

I’m really intrigued with what Winding Road have done here. With two separate rums they have provided taste profiles that are quite divergent, enough to seem as if they were made by different companies altogether. There are aspects of this aged rum that are more pleasing than the unaged version, while others fall somewhat behind: I’d suggest the nose and the finish is better here, but honestly, they are both quite good, just in different ways.

The constant tinkering and experimentation that marks out these small Australian distilleries — who strive to find both their niche and that point of distinction that will set them apart — clearly pays dividends. While I can’t tell you with assurance I tasted an individualistic terroire that would lead me straight to NSW (let alone Australia), neither did the Awads head into the outback at full throttle, going straight through the wall leaving only an outline of themselves behind.  What they have in fact accomplished is far better: they have created a rum that is thoroughly enjoyable, one that takes a well known style of rum, twists it around and bounces it up and down a bit…and ends up making the familiar new again. I can’t wait for Release #2. 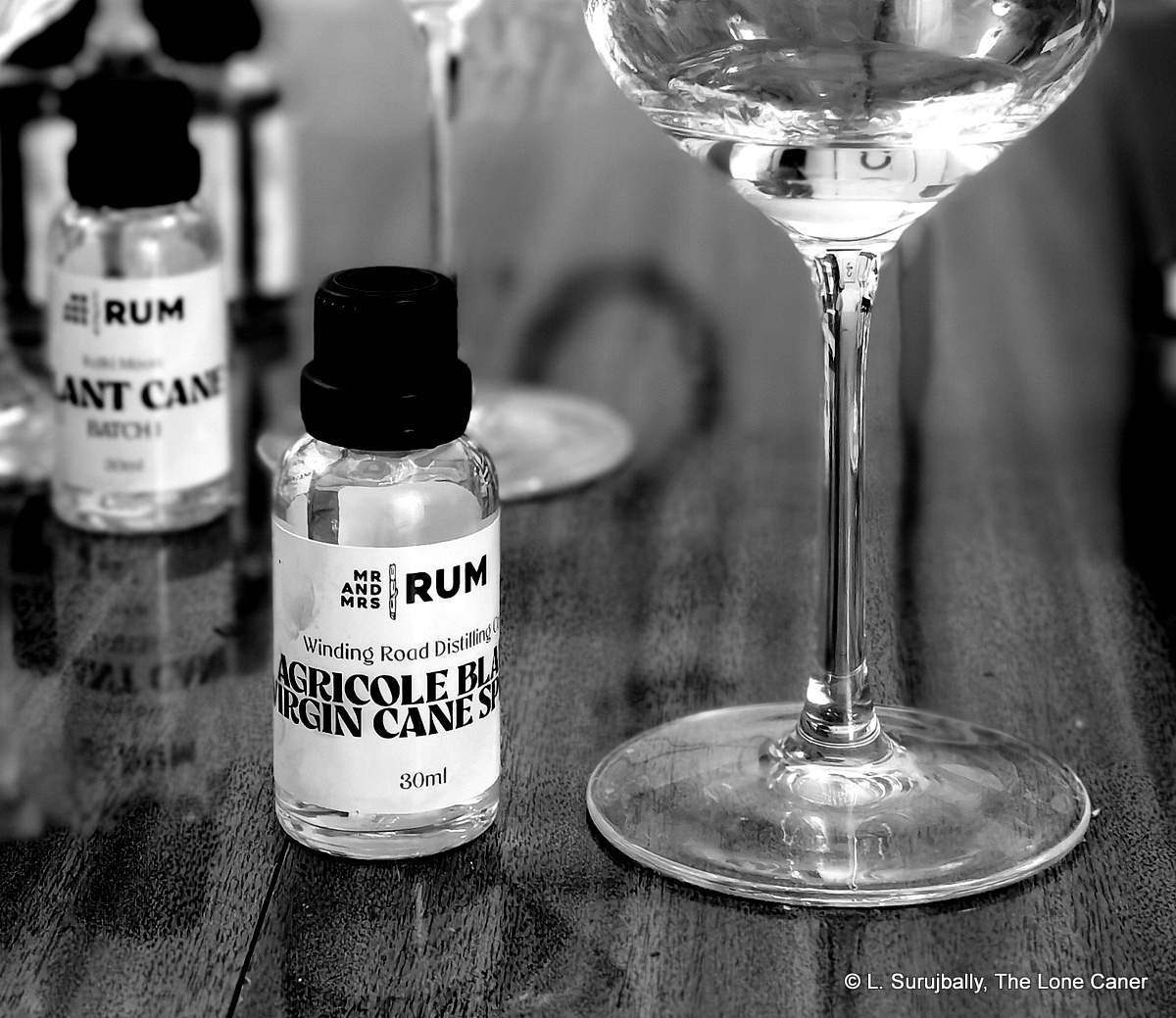 To call Winding Road Distillery’s unaged cane spirit both an “agricole blanc” and a “virgin cane spirit” seems like something of a tautology, doesn’t it? But no worries: it’ll will be renamed at some point to make it simpler and to gain access to the EU and other places where the term “agricole” is clearly defined and protected (they are well aware of the naming conventions). This is fairly important for their future plans, since all their current rums, including what they’ve laid down to age, derive from cane juice. There are no plans to move away from that core source material any time soon…which says a lot for their determination to set themselves apart from most other Australian rum producers who work primarily (though not exclusively) with molasses.

In a separate post I have gone deeper into the background of this new Australian family-owned and operated distillery: for the moment the specs on the rhum are as follows. It is, as stated, made from fresh cane juice: given the distillery is located in the middle of sugar cane country in New South Wales (~175km south of Brisbane for the curious), this is far easier for them than, say, JimmyRum down south, though trucking juice to the distillery is done in both cases. Fermentation mostly takes three days in open vats using both commercial and wild yeasts, and sometimes the wash is left to rest for longer (up to two weeks) before being run through their 1,250-liter Australian-made pot still, which is given the evocative name of “Short Round” (I’m waiting to see if anyone will pounce on R2-D2 or BB-8 any time soon, but never mind). Once all that’s done, some is set to age, and the rest is slowly diluted down to 48% and bottled as a blanc. 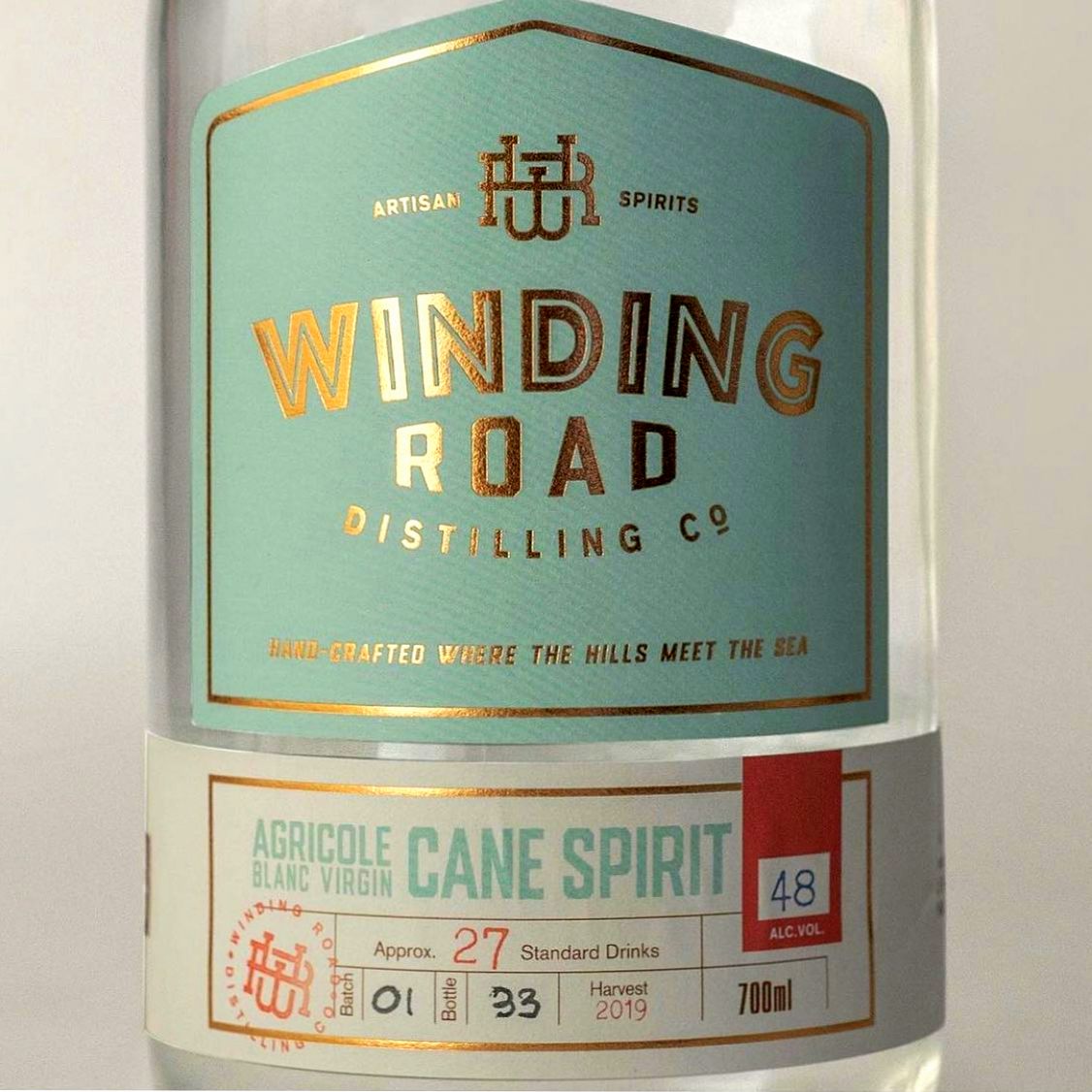 And what a blanc it is. When Mr. & Mrs. Rum posted their daily advent calendar notes on Instagram last year, they started by saying that the rum “…has been described as full of big HOGO aroma.” I can write to faithful readers that this is no more than the truth because once I smelled this thing it was all Pow! Biff!  Bam! — immediate and serious pot still blanc action, big time. Not as feral as a clairin, perhaps…but not a mile away either. Glue, damp sawdust, cedar, varnish, turpentine, paint, plastic and (get this) benzene, released at a solid 48% and intense as hell – another ten points of proof and we could conceivably enter “easily weaponizable” territory. At the inception it was like standing at the intersection of the lumber and paint aisles of Home Depot. The funk is nicely controlled with this thing and it does the segue into green grapes, apples, pears, wet new-mown grass, sweet white cane vinegar, apples, cashews, orange peel and licorice really really well.

Aromas aside, cane juice rhums stand or fall on the complexity and pungent intensity of their tastes (which in turn impact how they fare in a daiquiri, a Ti-punch or a mojito, the most common uses they’re put to). Sampling it neat reveals nothing I would tell you to avoid – in fact, it’s pretty good. The slightly higher strength helps, as it does in most blancs – it’s dry, initially sharp and solidly tasty.  First off come the woody and cereal-like notes of cheerios, sawdust and a touch of licorice and sandalwood. It’s not very sweet, though some sugar-water and lime is evident; then we get some cinnamon, vanilla, orange peel, nuts and a basket of mixed white light fruits, none of which are as fiercely crisp as the nose had been — some of the clarity of the nose was dialled down here. It all led down to a firm and lingeringly warm finish that reprised some glue, anise, light fruits and a touch of salt.

All in all, this is a seriously good unaged cane juice spirit – a real rhum, if you will.  I don’t know if you could try it blind and know it was not from some famed agricole distillery boasting long years of pedigree. Certainly there are some aspects to it that were curious, pleasant and intriguing — the lack of ageing is evident in the rougher palate and its occasionally sharp profile, which is perhaps an Aussie twang and terroire coming out — but it doesn’t fall far from the reference rhums of the type with which we are more familiar, and it does its job with a sort of insouciant enthusiasm and a joie-de-vire which is evident in every sip.