DOK.  The initials which have now become a word, have such a sense of menace.  They have all the unfriendly finality of an axe thunking into an executioner’s block. And perhaps this was deliberate, because a DOK rum (I give a delicious shiver) is at the trembling razor’s edge of esterland, 1600 g/hlpa, something so torrid and intense that it is used to calm down cask strength neutral alcohol before being sold to Scotch lovers, and those only now getting into rum.

Richard Seale is famous for his exasperation about DOK-weenies and fangeeks who wax rhapsodic about these things, because he knows that such a high concentration of esters was historically there for a reason – not to drink neat or rack up drinking brownie points, but to act as a flavorant to pastries, perfumes and cheap European rums in the 19th and 20th centuries (some of these uses continue). The taste of such a rum is so intense that it serves no sane purpose as a drink in its own right, and even in a mix it’s akin to playing with fire if one is not careful.

But of course, nothing will dishearten these spirited Spartans, for they, like your faithful reviewer, are way too witless for fear, and it’s a badge of honour to always get the rum that’s the biggest and baddest with the mostest even when the biggest ‘n’ baddest Bajan says otherwise: and so when one gets a DOK through fair means or foul, well, it’s gonna be tried, screaming weenies be damned.  And I gotta be honest, there’s some masochism involved here as well: can I survive the experience with my senses intact and my sanity undisturbed? Does the Caner like rum?

Judge for yourself.  I poured the pale yellow rum into my glass – carefully, I don’t mind telling you — and took a prudent and delicate sniff. The strength was manageable at 66.4%, and I’ve had stronger, of course, but I was taking no chances.  Good idea, because right away I was assaulted by the squealing laydown of a supercar’s rubber donuts on a hot day.  The tyres seemed to be melting on the road, the rubber scent was that strong. Man, there was a lot to unpack here: porridge with sour milk and salted butter, sharp as hell. Creamy not-quite tart herbal cheese spread over freshly toasted yeasty bread. Glue, paint, turpentine, more rubber, varnish, acetones, the raw cheap nail polish scent of a jaded Soho streetwalker, and still it wasn’t done.  Even after five minutes the thing kept coughing up more: sharp fruits, pineapple, strawberries, ginnip, gooseberries, plus paprika, basil, dill, and red olives.

And the taste, well, damn.  Sour milk in a latte gone bad, plus glue, paint, acetones and melting rubber.  Gradually, timorously, meekly, some fruits emerged: raisins, pears, unripe strawberries, pineapples, green mangoes, ripe cashews.  Oh and olives, leather, brine and coffee grounds, more fruit, and I was thinking that half of me wanted to shudder, stop and walk away, but the other half was mordantly curious to see how long this level of crazy could be maintained before the thing ran out of gas.  Truth to tell, not much longer, because after about half an hour it seemed to think I had been punished enough, and the intense pungency drained away to a long, spicy, dry but tasty finish – I could give you another long list of finishing notes, but at the end it simply repeated the beats of what had come before in a sort of crisp and spicy summation that left nothing unrepeated.

Look, I’m not making up these tasting notes in an effort to impress by establishing the extent of my imaginative vocabulary, or how complex I think the rum is.  Therein lies a sort of pointless insanity by itself. The fact is that those sensations are there, to me, and I have to describe what I am experiencing. That the rum is a smorgasbord of sensory impressions is beyond doubt – the question is whether it works as it should, whether it provides a good tasting and drinking experience, or whether it’s just a pointless exercise in dick measuring by an independent who wants to establish a rep — somewhat like Rom Deluxe did when they released their own DOK at 85.2%, remember that one?  As with that rum, then, I have to respond with a qualified yes.

Because it works…up to a point.

The issue with the rum and others like it — and this is an entirely personal opinion — is that there is simply too much: it overwhelms the senses with an undisciplined riot of aromas and flavours that fail to cohere.  Admittedly, the boys in Germany chose well, and the Letter of Marque is not quite on the level of crazy that attended the jangling cacophony of the Wild Tiger…but it’s close, and here I suspect the ageing did take some of the edge off and allow a bit of smoothening of the raw indiscipline that the Rom Deluxe product sported so happily.  Too, the strength is more bearable and so it works slightly better from that perspective as well.

And so, I have to give this the score I think it deserves, which is a bit on the high side, perhaps. It sure took courage for the Rum Cask company to release it onto an unsuspecting public, and there’s a lot of interesting aspects to this Jamaican rum: if one dilutes a bit, tastes carefully and with attention, I think a lot can be taken away.  Most people aren’t like that though, and I suspect that if an average Joe was given this without warning, he might grudgingly praise the thing, but would hardly be likely to spring for a bottle the way a committed Jamaican rum fan would. Unless, of course, he wanted a rum that was demonstrably one of the the biggest, bestest and mostest. 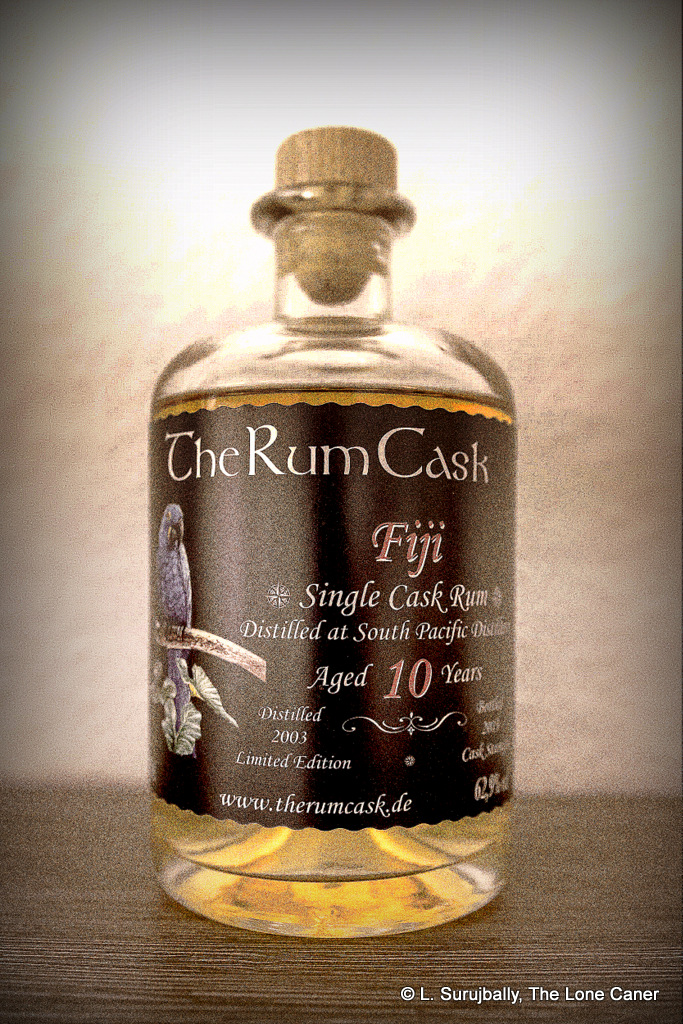