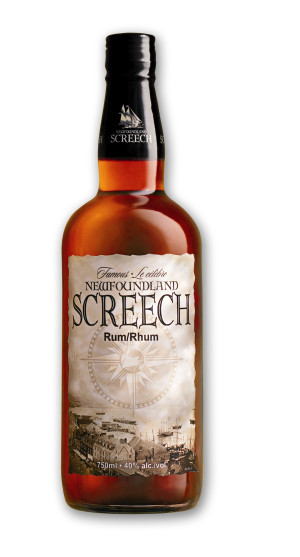 All humour and snide Newfie jokes aside, Screech is a thoroughly rock solid rum: not brilliant at any one thing, it is simply good at everything without shining anywhere.  Odd, but if you’re after something that just goes ahead and does what it does, here’s the one for you.

One has to smile when seeing a name as evocative as Screech. It has all these connotations of pain about it, mixed up with the Newfie seafaring heritage and their backwoods image so beloved of Canadian humourists: and so one’s imagination goes riot as the tipple of Newfoundland comes on the table for a taste.  Will it be a mess of agony as it sears one’s defenseless throat?  Will it be redolent of paint thinner, drano and various vile poisons meant to lure the unwary to their doom? One of those harsh hooches originally made on small wooden pot stills by somebody’s Uncle Seamus and not to be sampled by the unwise?

Screech has been so panned over the years, so made into an object of humour, that it’s quality (or lack thereof) have been made the butt of jokes, as opposed to being evaluated on its own merits.  Being a peasant myself and having grown up on low class paint remover and equally vile smokes made from kongapump leaves (don’t ask…but just whisper it to any Guyanese and he will nod wisely), I happily suffer from none of these hangups, and am perfectly prepared to sample this Single Digit Rum as one more interesting drink on my liquid road to nirvana. And I’d be lying if I wasn’t at least a little intrigued by something with so memorable a title.

Originally, Newfoundland hooch was not called that, or anything at all…it was just 18th and 19th century backwoods booze gleaned from the sticky leavings from the insides of molasses or rum barrels that had come through Newfie harbours from the West Indian trade.  It was melted out of the barrels with boiling water and then distilled in homemade stills to produce a hellishly strong rotgut akin the Brazilian alcool, or South African Cape Smoke, and as likely to make you go blind as anything else.  I worked in Labrador a few years ago, and the stories I heard suggested one can still buy its modern (and equally vile) descendants under the table in a few more rural areas.

The story goes that some poor sap from south of 49 took a hefty shot of the stuff while stationed on The Rock during the forties, and, seeing a Newfie toss it back (as any real man should), followed suit: apparently his howl of pain and misery (accompanied by a most interesting purplish colour change to the face) echoed for miles, brought his detachment in on the run, and they demanded to know what the hell that ungodly screech had been.  The Newfie (I like to think he bears a suspicious resemblance to the Bear) raised an eyebrow, blinked mild eyes, and said “The screech? That be the rum, boyo.”

Anyway, the stuff I was tasting is a more refined variant, based on blending of real rum stock imported to Newfoundland from Jamaica.  It’s a two year old distillate of molasses that gets aged in used whiskey or bourbon barrels, isn’t spiced or dandified like a tart’s handkerchief, and doesn’t pretend to be anything but what it is: a young rum, happy to be brazen, rough and a bit uncouth, showing off its spankin’ new sailor’s wellies.

Okay, so enough anecdotal nonsense.  Is it any good?

I thought it was. Oh, it kicks like a St. John’s fishwife on a bad hair day, no doubt; it’s not subtle, but bold and assertive and sports a hefty pair of biceps, together with a deep spirit-y nose redolent of molasses and caramel and not much else. It might make the eyes of the unwary water, the way any young brew does (the Coruba is another good example of a rum that does this). It has medium legs and a darkish copper-red, medium-dark colour and body…and it is just on the right side of enough sweet for me: not as spicy or caramelized as the Captain Morgan Private Stock, and not as whiskey-like as the Renegades. Quite a decent flavour profile, with some hints of fruit I couldn’t quite pick out…and maple, I think. A short and searing finish alleviated by…what else?  Another shot.

It’s at this point I should make remarks on what I smell and taste and what have you, but that’s just a waste of time with something so elemental. And being that way, I won’t make any more comments about nose and palate and finish (all are a bit raw, though by no means as harsh as some others I’ve tried) since my experience suggests the terms are overused in a product that is made to be drunk by people with no time to waste on frippery. My more dramatic side suggests that the dour nature of The Rock carried over into the character of its rum, and I liked that just fine.  I took it neat but preferred it with ice, and with cola it goes down very nicely indeed.

In summary then.  Screech is a decent mixer and can be had with colas or other mixin’s with nae problems (make a Scrape for yersel’ if ye want).  But the truth is that only wussies mix it up: real Newfies (or their wannabes) put hair on their chests and weight between their legs by drinking it the way it was meant to be had, which is to say, neat.

And if you be screamin’ yer lungs out after imbibin’, well, me son, it just be the Screech.

(Oh, and forget the cod: that be for tourists only.)