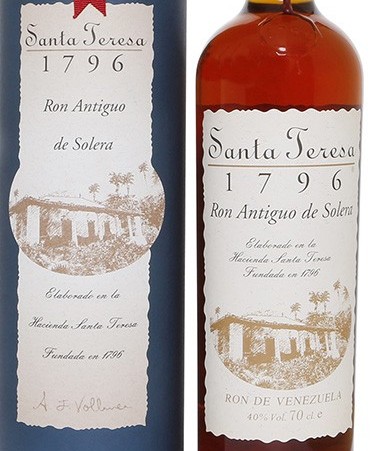 I remember being somewhat unenthused with this rum from Venezuela when Scott trotted it out last year.  Venezuelan rums seem to be a bit drier, with less body and not quite as sweet as those made in the Caribbean proper (I note that several online reviews have precisely the opposite opinion), and to my mind, that makes them best for mixers, not sippers.  Still, I had never made good notes on this baby since I tried it for the first time, so, when both Keenan and Scott coincidentally came up with the same bottle two weeks in a row, I had the opportunity to dip my schnozz and see if my deteriorating memories of the first sip were on target.

Some history first: the Santa Teresa distillery is located in Venezuela (north part of South America for the geographically challenged) about an hour east of the capital, Caracas, on land given by the King of Spain to a favoured count in – you guessed it – 1796. Political vagaries being the way they are in South American banana republics, the estate ended up in the hands of a Gustavo Vollmer Rivas, who began making rum from sugar produced on nearby estates – owned by other Vollmerses –  in the late 1800s.  The Santa Teresa 1796 was produced in 1996 to commemorate the 200th anniversary of the estate land grant, and, like the Ron Matusalem reviewed elsewhere on this site, is produced by the solera method.

In the solera process, a succession of barrels is filled with rum over a series of equal aging intervals (usually a year). One container is filled for each interval. At the end of the interval after the last container is filled, the oldest container in the solera is tapped for part of its content (say, half), which is bottled. Then that container is refilled from the next oldest container, and that one in succession from the second-oldest, down to the youngest container, which is refilled with new product. This procedure is repeated at the end of each aging interval. The transferred product mixes with the older product in the next barrel.

No container is ever drained, so some of the earlier product always remains in each container. This remnant diminishes to a tiny level, but there can be significant traces of product much older than the average, depending on the transfer fraction. In theory traces of the very first product placed in the solera may be present even after 50 or 100 cycles. In the Santa Teresa, there are four levels of ageing. And the final solera is topped up with “Madre” spirit, which is a young blend deriving from both columnar and pot stills.  Seems a bit complicated to me, but sherry makers have been doing it for centuries in Spain, so why not for rum? The downside is, of course, that there’s no way of saying how old it is since it is such a blend of older and younger rums (Appleton does this as well with some of their stock, and I can’t say I was impressed with their offering).

The resultant is a dark brown, medium-bodied honey-gold rum with a backbone of an older, dry blend.  It’s difficult to describe the exact feeling I had when I tasted it, but it’s like a very pure, medium strong unsweetened hot tea carving its way down your throat. Assertive, yet not unpleasant. And not very sweet, as I’ve said – it’s almost like a good sherry.  The nose is lovely: honey, vanilla, some faint hints of fruit (banana and cherries?), caramel and toffee. The taste and texture on the palate is not as smooth as I would like, and the finish is medium long, redolent of light oak and caramel. A pleasant nose, a good sip, a nice finish, a decent taste. A solid rum, medium tier.

I didn’t care for it neat, but on ice it’s a very competent sipper – without going so far as to make me really want to go nuts over it. In other words, not an English Harbour by any stretch of the imagination.  I would use it as a mixer without hesitation, but I’m not sure if that isn’t just a bit of sacrilege there: after all, the whole point of making something this special is to savour the richness, isn’t it? I guess it flew over my head.

It may be too early to say, but thus far, based on this and the Ron Matusalem, I have to say I’m less than impressed with the solera method of blending. I’m perfectly willing to accept that there must be superior examples of the solera blender’s art out there, and will search the remaining 1450+ varieties of rum until I find one, but I fear that either such and example will be found after I curl up my toes, or be out of the range of my rather slender purse.