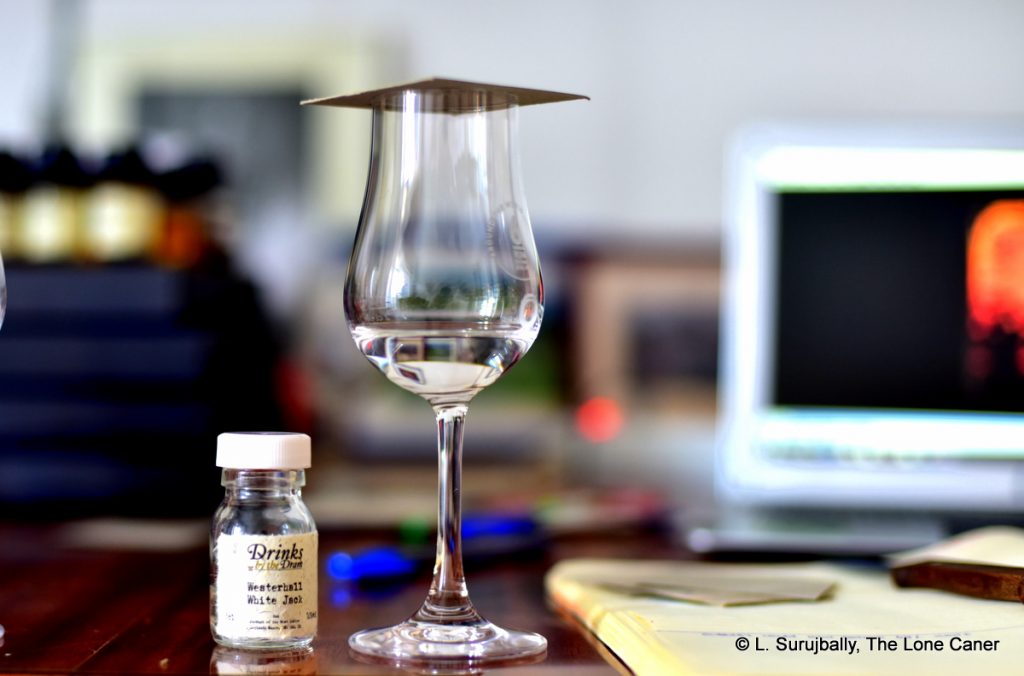 To be clear, there remains a Westerhall White Jack rum in current production.  It’s not this one. It has been suggested that it’s the same as the Jack Iron rum, just made into a white. That’s a harder call, but I doubt that too, because there’s a bit more complexity to this one than the Jack Iron where the reverse might have been expected.

In any case, this version has been discontinued. Even by 2015 when The Fat Rum Pirate penned one of the only reviews of this 70% white Grenadian overproof, it had already undergone reformulation and rebranding that led to a sexier bottle and a one-degree proof reduction in strength. The current stylish ice-blue-and-white bottle is rated 69%, and it’s not a stretch to suggest that this was done to go head to head with the much better known and well-regarded Clarke’s Court White Overproof or Rivers Antoine white popskulls which were also at that strength, and perhaps also to steal a point or two of market share the pack leader, the Wray and Nephew 63% version (although good luck with that, ‘cause in my view they had and have nothing to worry about).  Then again, it might also have been to make it more easily transportable on airlines ferrying tourists in and out, who often cap their spirit strength allowances at 70% ABV. 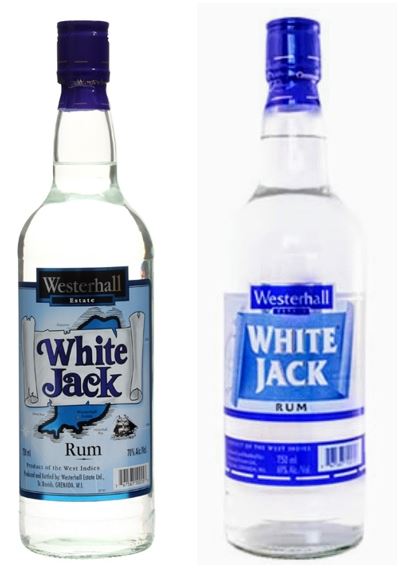 Old and new variants of the White Jack. The one reviewed here is the bottle on the left.

That said, it’s useful to know that Westerhall in Grenada is no longer a distillery: though a distillery did exist since the mid-1800s, it was all about the bulk export market — Westerhall’s own brand, Rum Sipper Strong, was created to service the islanders’ demand only in the early 1970s.  It took another decade and a half or so, before the Westerhall Plantation Rum 1 was formulated specifically for export – however, the sales couldn’t have been strong enough to justify the distillery, because by 1996 Westerhall ceased distillation completely and started buying bulk rum itself (mostly from Trinidad’s Angostura), leaving its distillery to rust – it was destroyed by Hurricane Ivan in 2004 and the ruins can be seen to this day on the grounds

Age – Unknown; suggested to be unaged but I doubt it – like many early white rums were, it’s likely lightly aged, a year or so, and then filtered to clarity (unaged rum is already clear).

Palate – Very intense, unsurprising at the strength. Nuts, cream, butter, quite creamy, and tasting both of sweet and salt; lemon zest, apples, bananas, red currants and some spices – cumin and cardamom.  There’s more but the strength kind of eviscerates any subtler notes and this is what you’re left with

Finish – You wouldn’t think there’s more than a hot last of spicy fumes, but actually, it’s not bad: toast and cream cheese, chives, olives which gradually transmutes into a nice sweetness of green grapes, bananas and some other indeterminate fruits.

Thoughts – No competitor to the more aggressive, individualistic, funkier and all-out better J. Wray.  It’s a column-still, barely-aged rum, with all that implies, and strong enough to cure all that ails you (from a broken heart to your stalled jalopy, it’s rumoured) — and it’s surprising that as much taste has come through as it has. Not entirely a bad rum, just not one of much real character, and best for its intended purpose, a mix of some kind.