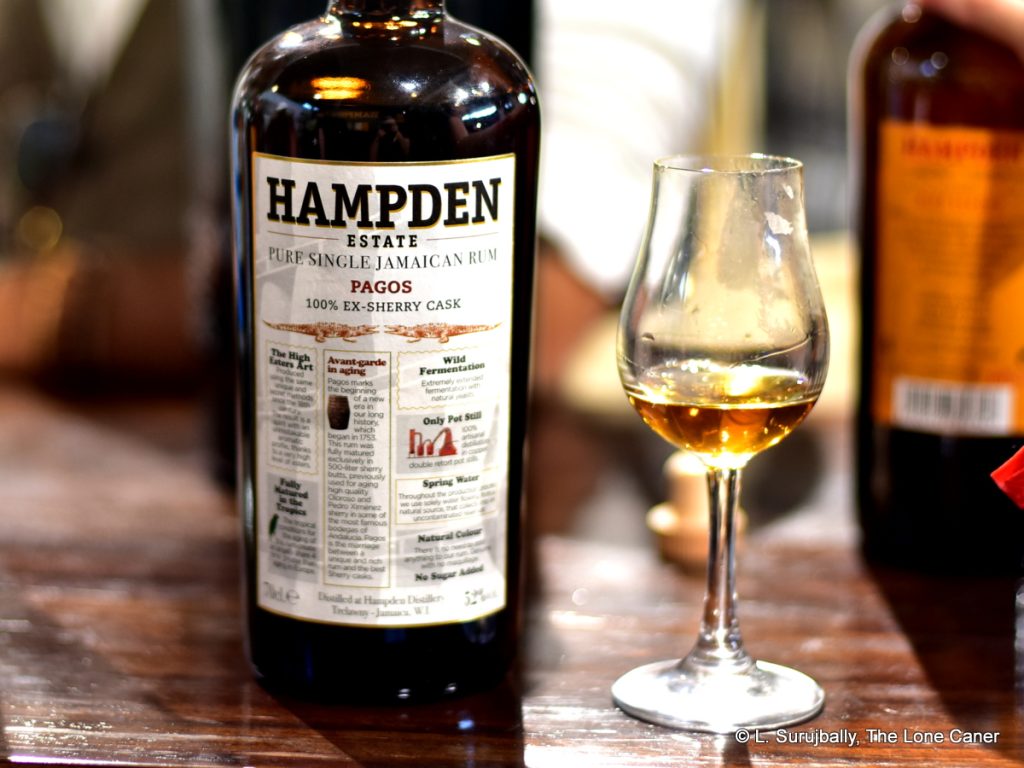 The “Pagos” rum from Hampden — all 1200 bottles of the release — is another one of that storied estate’s experiments involving Luca Gargano, whose company has distribution rights to their rums, and who is known for tweaking things in odd directions just to see what comes out at the other end (and if you doubt that, just visit the NRJ quartet or the EMB rums which are about as non-commercial as it’s possible to get). Unusually for Hampden, this isn’t a multi-bottle series, but a one-off release of a single type, though it is my understanding that there may (will?) be others in years to come.

Luca was hinting about the Pagos (the word means “cru” in Jerez) and talking it up at masterclasses in various ‘fests around Europe in 2022, and indeed it was available for the proles to try at both Paris’s WhiskyLive and London’s UK Rumfest before going on sale later that year. The key takeaway is that it was completely aged for around 3-4 years in one of some forty 500-litre butts sourced from a Bodega called Lustau in SW Spain close to Cadiz, which Velier distributes. The butts held Pedro Ximenez and Oloroso for a few years and can therefore be said to have been influenced with and by better sherry, for longer, than far too many such barrels used around the rum and whisky industry which have some cheap plonk dropped in to them for a short time and then sold around as “seasoned.” The quality of the sherry and the length of time in the barrel does make a difference…as this rum shows.1 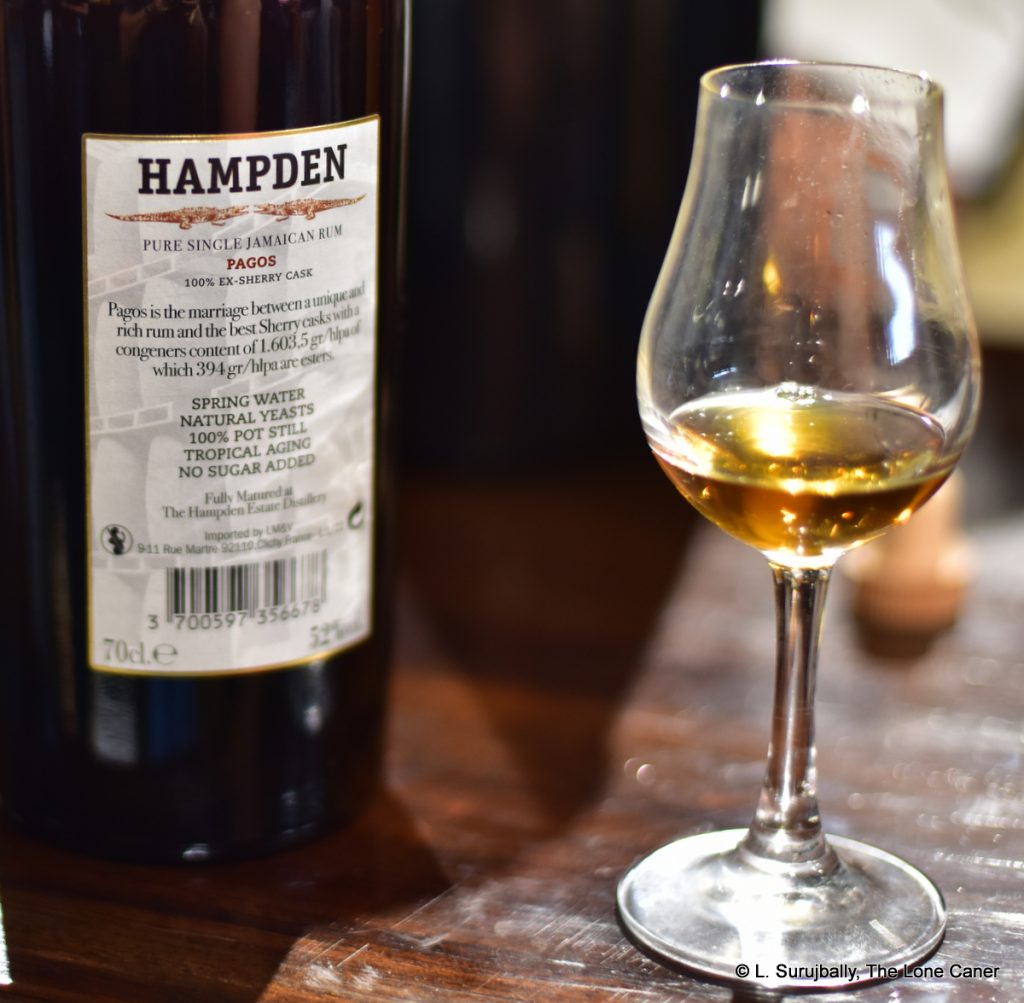 So after all the visions and daydreams and desires to make a rum version of Macallan (which is not now that strength which in old days moved earth and heaven, I posit, but never mind), what came out the other end was a long-fermentation pot-still Jamaican rum fully aged in these butts for the aforementioned 3-4 years, issued at a nice and firm 52% and sporting an ester count 2 that places it at the very top end of LROK territory, and edging close to HLCF…my own personal sweet spot for Hampden rums.

It’s an unusual bottling, a Hampden, a Velier, a limited edition from real sherry cask ageing, so that said, what was it like?  Well, very nice, truth be told. The 52% gives it a sort of firm and easy elegance that isn’t out to wreak havoc on your sinuses, and the initial aromas are of  a musky, winey, almost tawny old port. It’s chock full of baking spices like cinnamon, cloves, a touch of nutmeg; it channels a soft line of olive oil and saline, before blooming into all sorts of additional stuff that shows off the funk: pineapples, mangoes, oranges and apples that are too ripe, plus florals, acetones and even some crushed hazelnuts and pistachios. There’s a lot to unpack here for anyone who takes their time with it. 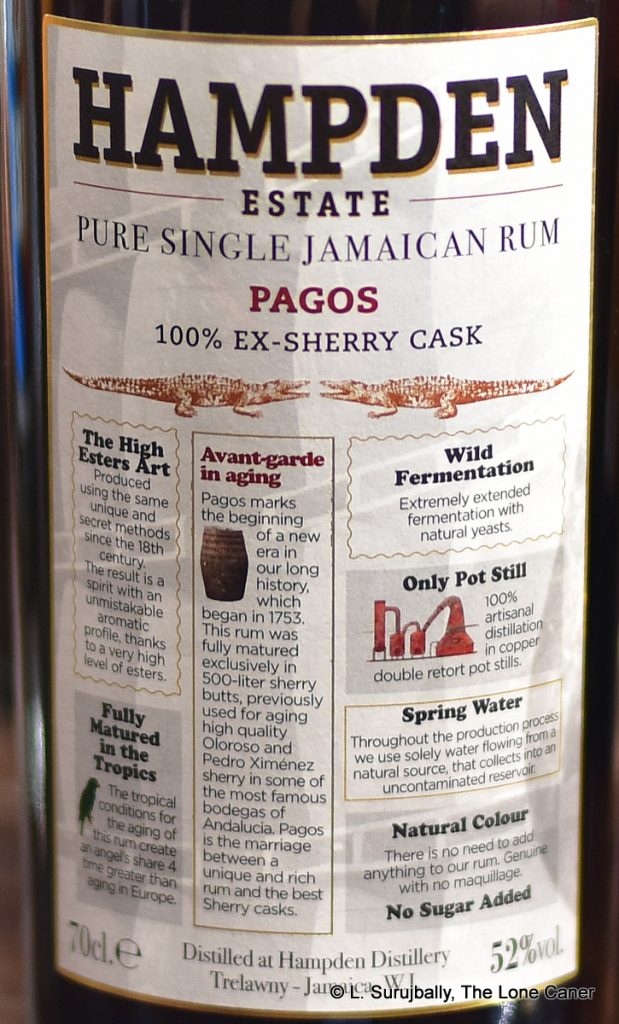 That’s the nose; the palate is somewhat less forward. It’s lightly floral, and provides tastes of a patchouli air freshener and laundry detergent, cinnamon and cloves again, creamed rice, funky and fruity, with an on and off bite that’s fun to experience. There’s somewhat more nuttiness here, but also more tart fruits: passion fruit, cherries, mangoes, strawberries and some yoghurt.  I particularly liked the sense of dusty spices that hung around (reminds me of Grandma Caner’s pantry back when I was a kid), and while not overly sweet, the rum does have a sugary, liqueur-y background to it that works well with the caramel, vanilla and bananas you end up with. The finish is pretty fine too – solid, long, not obnoxious – it doesn’t flaunt a bunch of esters in your face and blare “here I am!” like a loud and bombastic opinion you didn’t ask for, just quietly dials everything down so that instead of getting one thing after another, it’s like one thing after another is subtracted, until all you’re left with is some flambeed bananas, oranges, nuts, unsweetened chocolate and wine, hanging around to tease you like the Cheshire Cat’s grin.

Well, now this was quite some rum. I really liked it: both for its complexity and the self-evident care with which it was put together (more ageing or a smaller cask would have upset the delicate balance of the taste elements), which rewarded a more patient excursion of its charms. It’s the sherry cask, I’m thinking, although which cask had more time – the Oloroso is drier and crisper, while the Pedro Ximenhez is quite a bit sweeter, so the impacts are different – is a mystery.

The Pagos, at end, is absolutely a sipping, drinking rum. It’s quite restrained for a Hampden rum, let alone a pot still Jamaican – there’s an elegance combined with easy strength here that I don’t get to see all that often, a sort of refinement that speaks of a silk glove only barely covering a mailed fist. I’ve heard it’s sold out just about everywhere, and my feeling is that people bought the name more than the rum – but for all those who dropped the coin to get the rum just so they wouldn’t miss out, I think they’ll be stunned at what a lovely rum they ended up getting when they finally open it.