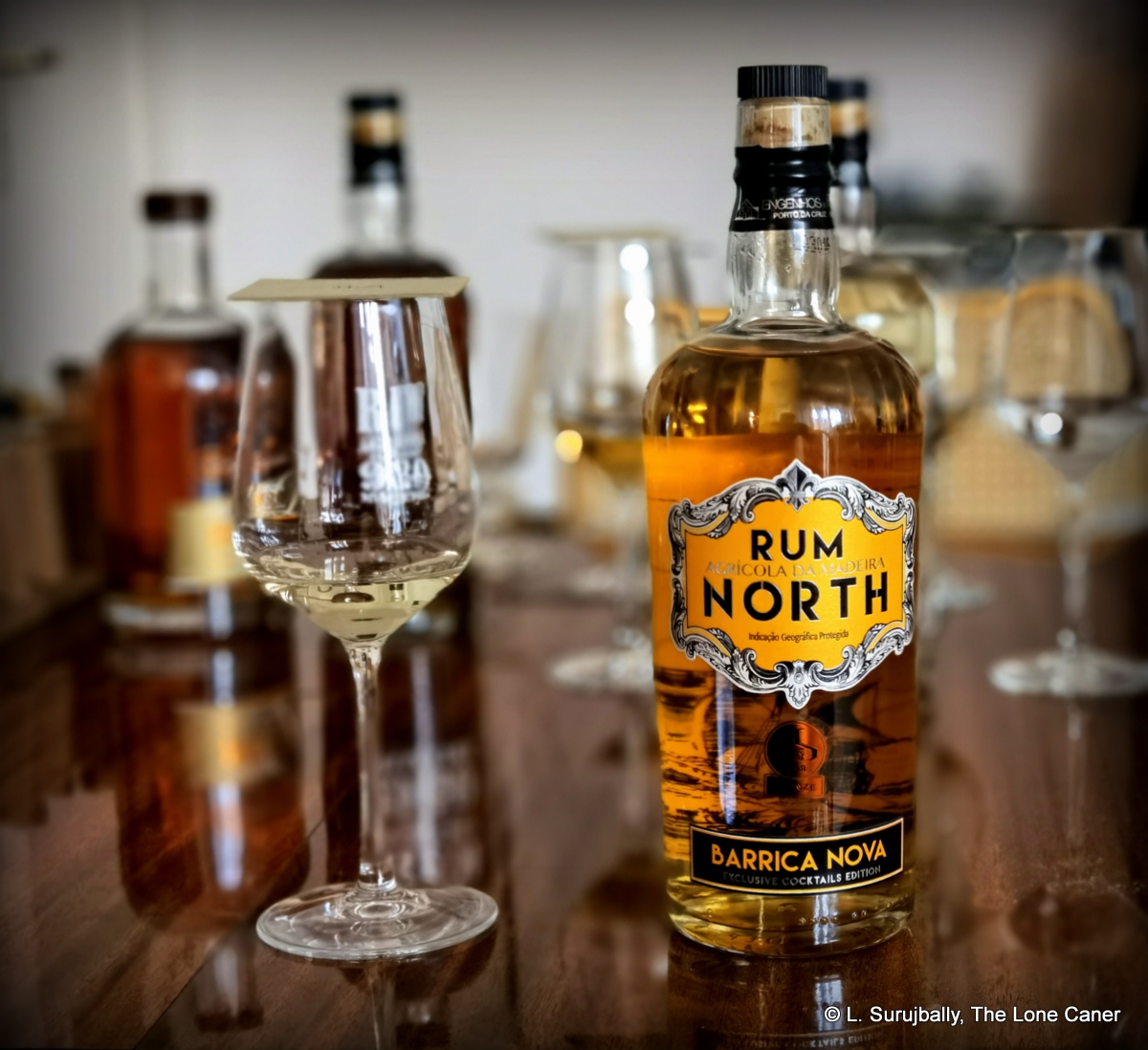 Today we’ll continue with another rum from the island of Madeira and the company of Engenos do Norte, which, as its name suggests, is located in the north of Madeira Island.  The company was founded in 1928 by the merging of some fifty sugar factories at a time when it was simply not economical for individual small mills to operate. While they had been making rums on the island for centuries, it had a lesser importance to sugar, and most of the local rum was either consumed domestically or in Portugal (wine was actually much more popular and commonly made). In other words, though rum has a long pedigree on Madeira, the emergence of the rum (and local rum brands internationally) as an economic force and a serious revenue and tax generator, is very much a 21st century phenomenon.

Engenhos do Norte remains as the largest rum producer in Madeira, and has several different brands in the portfolio: Branca, North, 980, 970, Lido, Zarco and Tristao Vaz Texeira.  All are column still rums, all are cane juice based and as far as I am aware, all conform to the Madeira GI (Indicação Geográfica Protegida). The Lido is a single underproofed (38%) white for making ponchas, the local fruit cocktail. The “Tristao”, “North” and “Zarco” ranges are all series of unaged or lightly-aged blended agricolas (the exact difference among the brands is unclear, as the specs seem quite similar), the “Branca” rums are white unaged rums at several proof points, while the “970” and “980” are more aged variations and can be considered somewhat more upscale.

The Rum North “Barrica Nova” is a golden rum, not marketed as anything particularly special. As with all the others mentioned above, it’s cane juice derived, distilled on a column still, aged for three months in new French Oak barrels (hence the “barrica nova” in the title), and released at 40%. It’s very much a living room rum or for the bartender’s backbar, made for cocktails and not neat sipping; nor does it appear to be anything exclusive or limited — and while it’s on sale in Europe, so far I haven’t seen anyone’s review of it out there. 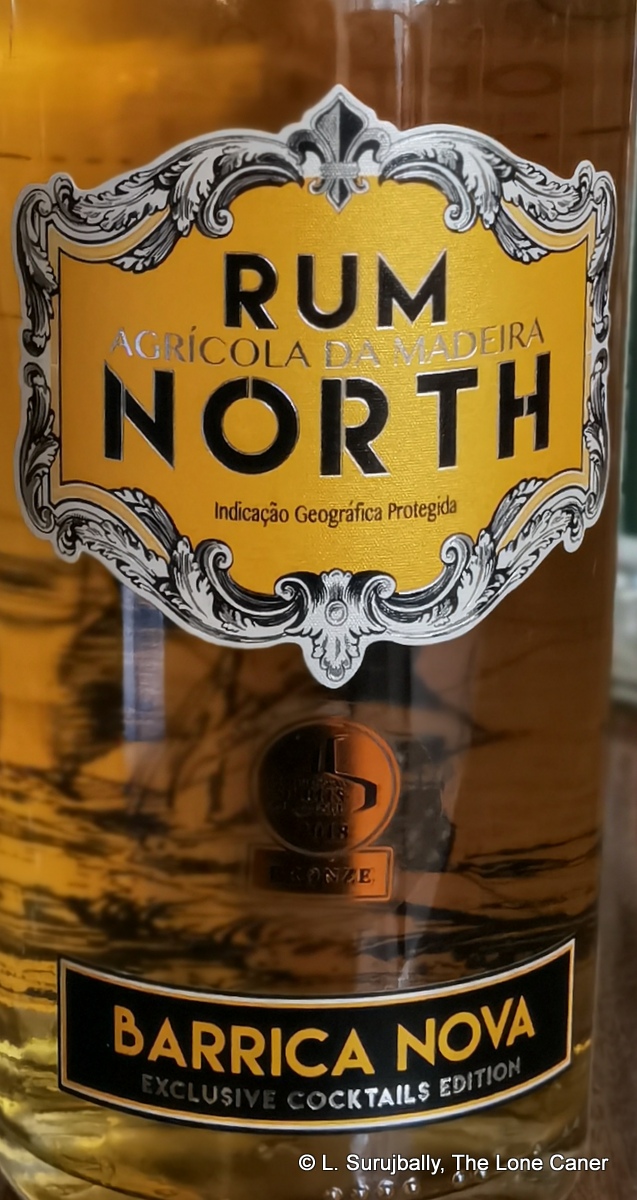 The rum’s initial nose presents with bright golden notes of citrus, green grapes, ginnips and unripe papaya, nicely fresh and quite light – not much of the grassy herbals as characterise a French West Indian agricole, yet close enough to suggest the commonality of origin. There are notes of green peas, fanta, and an apple-flavoured creamy yoghurt. There’s a touch of cream cheese, fresh wonderbread toast (!!), with light lemony aspects, and lurking quietly in the background, the rather peculiar aroma of old leather suitcases pulled from musty cupboards after long disuse. All these aromas are rather faint and the citrus and fruit sodas are more dominant, with the others providing a vague and uneasy backdrop that takes effort to tease out.

After that rather decent nose the palate falls flat from exhaustion at trying to keep up. The rum tastes watery, thin and sharp as a harridan’s flaying tongue. Notes of light fruits, honey, sugar water and vanilla predominate, but this is a scrawny kind of gruel, and even a few last minute bits and pieces – aromatic tobacco, salt caramel, old carboard and nail polish – don’t really make this a sip worth seeking. The finish is even weaker: short, light, sweet, inoffensive, mostly very light fruitiness – watermelon, papaya, white guava –  and requires too much effort to locate.

This rum is not my thing. Like the 980 Beneficiado, there’s just not enough going on to provide a taste profile of any distinction, and while 40% may be the preferred strength locally or for maximal exports, the faintness of what the palate presents demonstrates why some rums should simply be stronger. It enforces a limitation on the producers – probably for tax, regulatory or other reasons – that should be pushed past for the benefit of consumers who buy it. It’s no accident that the best-scoring Madeira-made rums we’ve seen so far have all been from independents who go cask strength and combine that with some decent ageing.

For the casual imbiber the weak-kneed profile doesn’t mean there is anything ostensibly, offensively wrong with the rum…and yet, for those who have a bit more experience, everything is. Even with the decent aroma, it’s too anonymous, too lacklustre and certainly does not bugle “Madeira!” from the rooftops – at best, it’s an exhausted squeak. It’s made too much for everyone, which really means for no-one, and you’ll forget about it five minutes after walking away. The ‘Barrica Nova’ is underwhelming, underachieving, underdelivering, and underperforming, and although I suppose that like a shotgun wedding’s reluctant groom it’ll grudgingly do what it’s meant to, in my book that doesn’t count as a compliment.