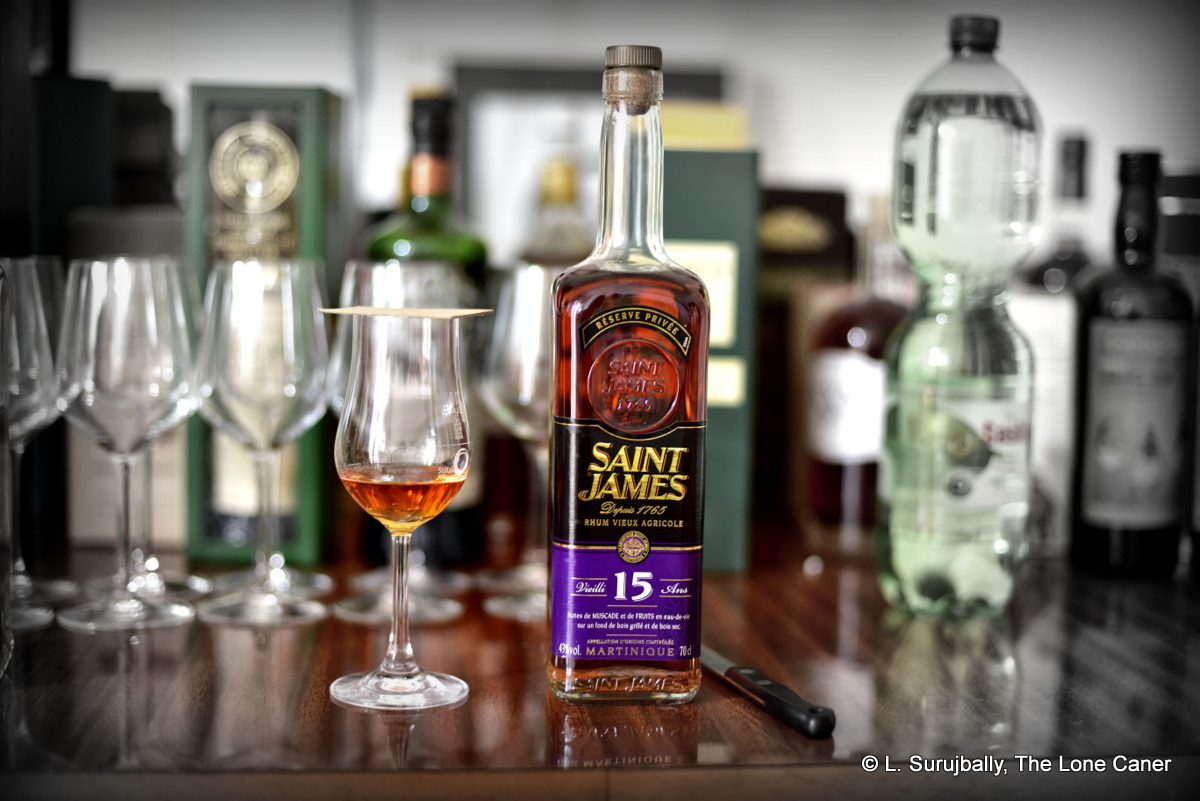 Saint James. It’s not a name that’s unknown, since it’s the source of one of the oldest surviving rums in the world (the mud-black 1885), the place where rum-swami Luca Gargano started working all those years ago, and where Marc Sassier now hangs his hat. They’ve been around — and have been among the largest Martinique agricole makers — for so long, that they sometimes get passed over in people’s estimation in favour of younger or more exciting or more innovative Martinique operations (like, oh, A1710, or the new parcellaires). Yet year in and year out, their standard lineup continues to enthrall and impress and demonstrate they’re not laggards by any means.

Saint James divides its range of rums – and they make quite a few – into three main categories. First, there’s the cocktail fodder, mostly whites like the Imperial Blanc Agricole, Royal Blanc Agricole, Blanc Agricole 55°, Fleur de Canne and that extraordinary pot-still Coeur de Chauffe, plus the Rhum Paille and Rhum Ambre which are young and standard strength low-end blends. At the top of the food chain lie the special “exceptional” editions, the millesimes, single casks, special blends and anniversary editions in fancy bottles which will set you back a pretty penny and provide a handsome adornment to your home bar. But when it comes to value for money, it’s the mid-level “tasting rhums” in their stable that give most bang for the buck – the Rhum Vieux 3 Ans, the 4-5 YO blend of the Fleur de Canne Vieux, the 7 Year Old, 12 year old, and the best of this series, I think, the 15 year old…which, were it slightly cheaper, might have made it a Key Rum of the World instead of the 12

Because that 15 year old rhum is, to my mind, something of an underground, mass-produced steal. It has the most complex nose of the “regular” lineup, and also, paradoxically, the lightest overall profile — and also the one where the grassiness and herbals and the cane sap of a true agricole comes through the most clearly. It has the requisite crisp citrus and wet grass smells, sugar came sap and herbs, and combines that with honey, the delicacy of white roses, vanilla, light yellow fruits, green grapes and apples. You could just close your eyes and not need ruby slippers to be transported to the island, smelling this thing. It’s sweet, mellow and golden, a pleasure to hold in your glass and savour

The taste is a similarly striking combination of depth, lightness and flavour. White guavas and pears mix it up with gooseberries and tartly ripe white soursop; there’s caramel, vanilla, dried fruits held in delicate check by some florals and mint, without any becoming overbearing and hogging the show. There’s so much going on here that it’s difficult to stop and just pick out the highlights. Salted butter, dates and caramel, almost tequila-like at times, a touch of brine and olives here and there, but it’s all extremely well integrated, leading to a finish that is not particularly long, but quite fragrant with all the flowery and fruity notes of a tropical isle that perhaps exists not so much in reality, as in our fond remembrances and imaginations.

What these tasting notes describe is a top-end, well-aged rhum of a standard lineup. But these words don’t do justice to exactly how — when compared with and against the 7 and 12 YO — it rises above them, and in our esteem. I think Marc Sassier has created a masterful example of a blender’s art that somehow moves beyond being something standard or regular or “same old same old”.

You see, it’s almost received wisdom that rums showing off any company’s possibilities and street cred, those that build the brand by demonstrating the amazing quality of which they are capable, are the flagships, the uber-expensive halo-rums, the single barrel or single year’s offerings — look no further than the El Dorado 25, Abuelo Centuria, Appleton 50 or even Saint James’s own 250th Anniversary to see that principle in action. But to my mind, the full measure of a producing company is better found in the sometimes unloved mass-market mid-level offerings, made in quantity, priced to move…the aged blends which so often are sadly lacking in any kind of lore or romance. Any run-of-the-mill rum, of any age, that emerges from this kind of assembly-line mentality and process, yet still retains fires of lust, of allure, of sheer quality, is a kind of industrial miracle. As this one is.