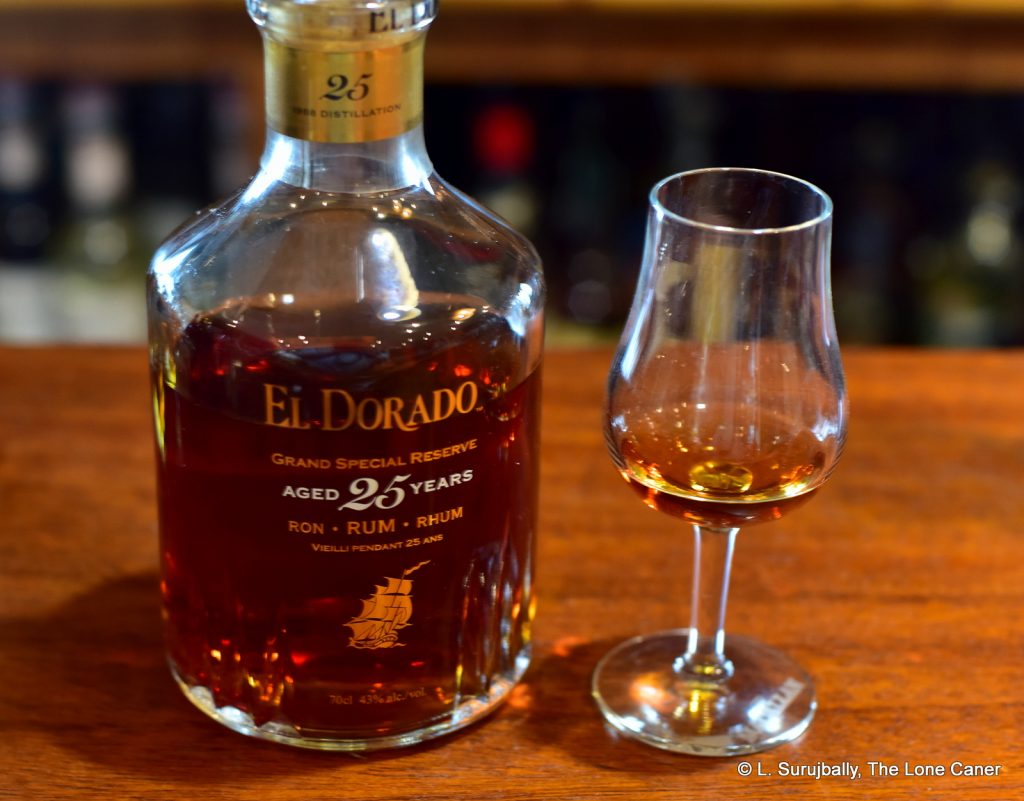 Writing about the Milroy Jamaican 26 year old, I rather sourly remarked that there was absolutely nothing to go on regarding the provenance of the rum.  No such issue afflicts the 1988 edition of the El Dorado 25 year old rum, which is one of the most recognized premiums ever made. Even increased competition from  other Caribbean (or independent) makers has done little to dull its lustre….except among the cognoscenti, who wouldn’t rinse their glencairns with it.

Which, for the uninitiated, seems somewhat extreme.  After all, just look at the stats: bottled at 43%, and it’s a true 25 year old rum – nobody has ever put a dent in DDL’s age statements – made by one of the most famous brands in the rumiverse, using the near legendary stills in a masterful assembly: various sources note that the marques of EHP (wooden coffey), PM (double wooden pot still), AN (French Savalle Still) are all part of the blend, and while there is some variation from batch to batch, overall the rum remains remarkably consistent.

So what’s the issue? Well, by now, anyone who has read about DDL’s El Dorado rums is – or should be – aware that they practice dosing.  That is, the addition of caramel syrup or sugar or whatever, in order to smoothen it out and make it more sippable, more elegant, more rounded. This is of course never acknowledged or noted on the label, and it took private hydrometer tests to ascertain that the El Dorado 25 YO 1980 version had around 50g/L of adulterants, and the El Dorado 25 YO 1986 around 39 g/L (I don’t have specs on the 1988).  These additions certainly do their duty admirably – the rum is smooth, quiet, an awesome after-dinner sip. But there’s no free lunch in this world, and the price that is paid for that sippability is a muted profile – a muffled, muddled, addled, over-sweetened mess that obscures the high points of a rum that old. 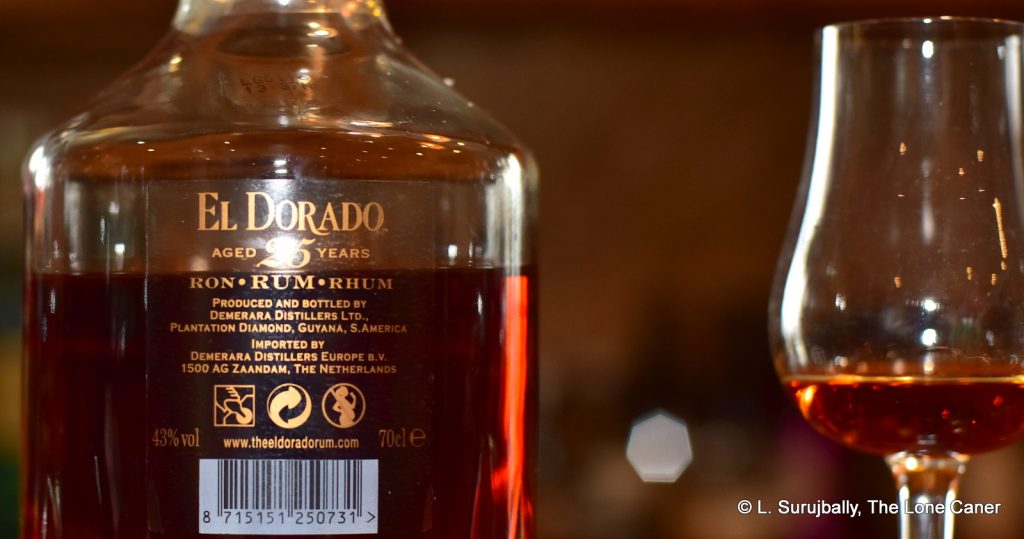 Nosing it makes it clear right off the bat.  It’s slightly heated, fat and rounded – almost thickly aromatic. The dusky notes of anise and caramel, molasses, coconut and bananas are evident, but just barely. With some effort and concentration, raisins, apricots and prunes can be sensed…almost.  It feels toned down, and that’s not just a function of the relatively low strength, but also the suppressive nature of the dosage. And even on the nose the sweetness is self-evident.

This leads to a palate that is, at best, indeterminate – at worst it’s a travesty of what a rum aged for twenty five years should be. I spent half an hour sipping this rum in an attempt to take it apart, provide better tasting notes…and at the end, all I came up with was vanilla, toffee, molasses and licorice. There were some white chocolate and coffee notes.  Vague flowers. Fleshy fruits, very ripe oranges, faint faint faint. And over it all was the sweetness and liqueur-like nature of the whole tasting experience which was simply too much. What this also did was to make the finish practically nonexistent. It was blattened flat by a sort of cloying syrupy-ness, and no subtle tastes really emerged to make the close an enjoyable one.

If you think that this review of the ED-25 is relatively moderate and temperate – or even bland – you’re quite right, so let me provide some extra personal details: the day I tasted this thing I was hopping mad with it inside of five minutes, and the very first notes in my book started out “Oh for f**k’s sake!!”  I wanted to write an R-rated review.  I wanted to eviscerate it with foul language that would make a Mudland porknocker cringe. And eventually, I had to write this review four times from scratch lest my disappointed fury bleed too much into the narrative. 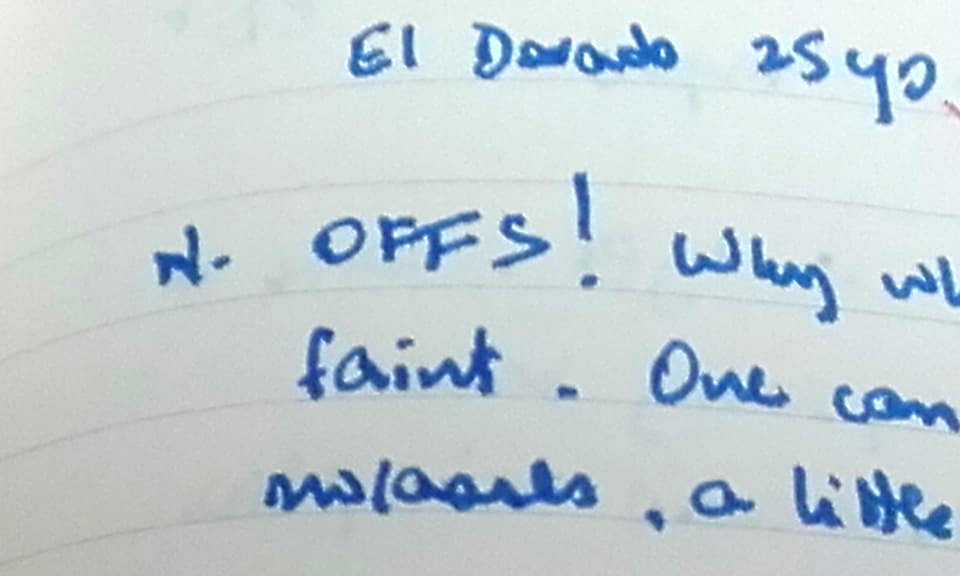 And I’ll tell you why I was so pissed off – because I know there’s better under the hood of this deliberately triple-locked supercar. Because you can sense the quality, the brilliance of what could have been, lurking underneath the dreck — but are kept away from it by a freakin’ wall of additives neither asked for nor wanted, but which it was felt necessary to inflict. Because I’ve eaten labba and drunk creek water and want more out of the country.  Because I know DDL can do, and has done, better. It’s like the Little Caner dumping on a school test because he was too lazy to study even though he knew the material inside out. And like his results when he pulls this crap, were they to be given, the ED-25 (1988) doesn’t deserve to be rated. I’m that incensed.

So I’m not going to score this rum.  What’s the point? Those who want a five hundred dollar hooch with a cool presentation and excellent age won’t care enough to read this; those who despise dosage and adulteration in any form will never spring the coin, and the more knowledgeable folks in the middle know there’s better out there for less – sometimes even from El Dorado – and will be neither surprised nor appreciative. I’m going to suggest that if you want a smooth, sweet, well-aged rum and can get it for free as part of a tasting or a sample set, then by all means, go for it. Want to impress people who know nothing about rum, here’s one to wow their socks off. Otherwise, look elsewhere.

In the days after this post got shared on FB, it got a remarkable amount of traction in the comment section, especially in Rum Club Canada and The Ministry of Rum.  Most agreed, and others were, I imagine, amused by the idea of the Caner losing his temper.