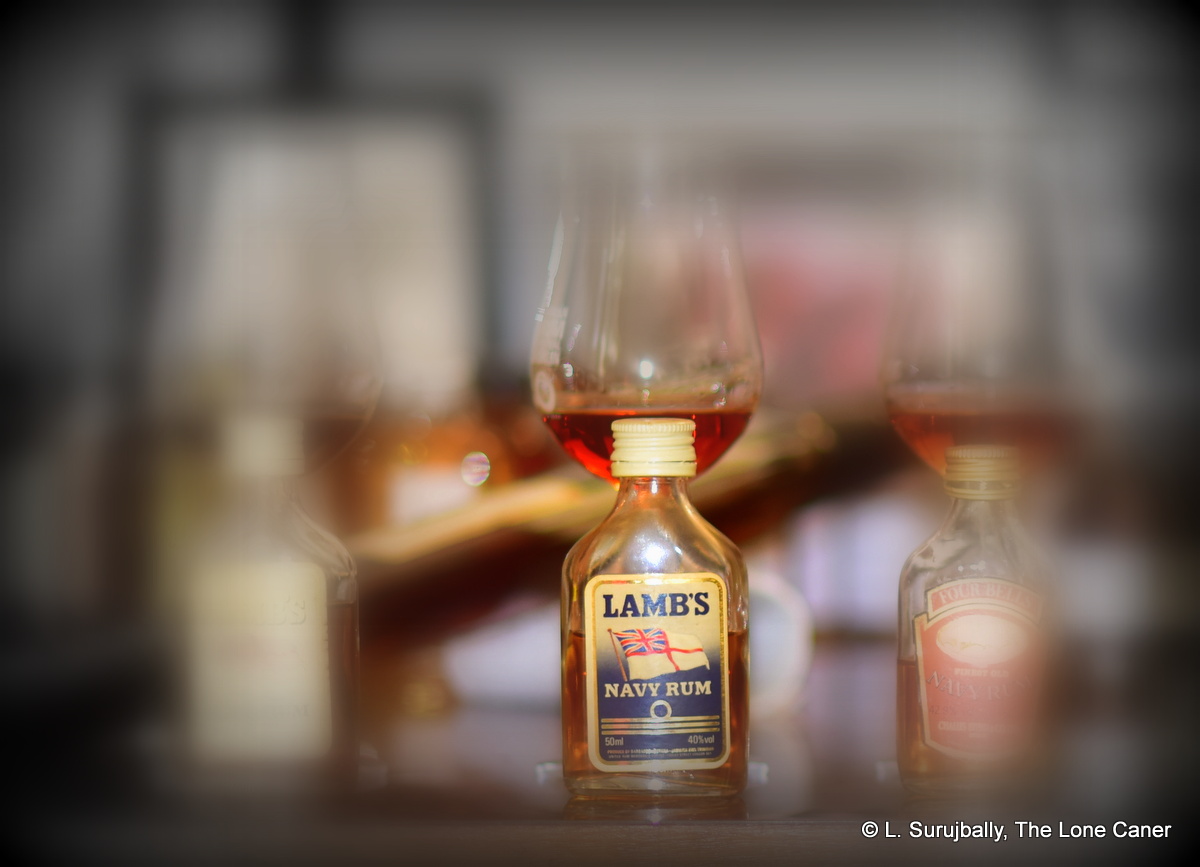 This rum is a companion of the Lamb’s 70º Demerara Navy and other UK rums made by various merchants bottlers, e.g. Four Bells Finest Navy Rum, Mainbrace, Black Heart, Red Duster Finest Navy, Old Vatted Demerara rum, and so on. It’s admittedly a treat to try them and trace their dusty, almost-forgotten companies of origin. 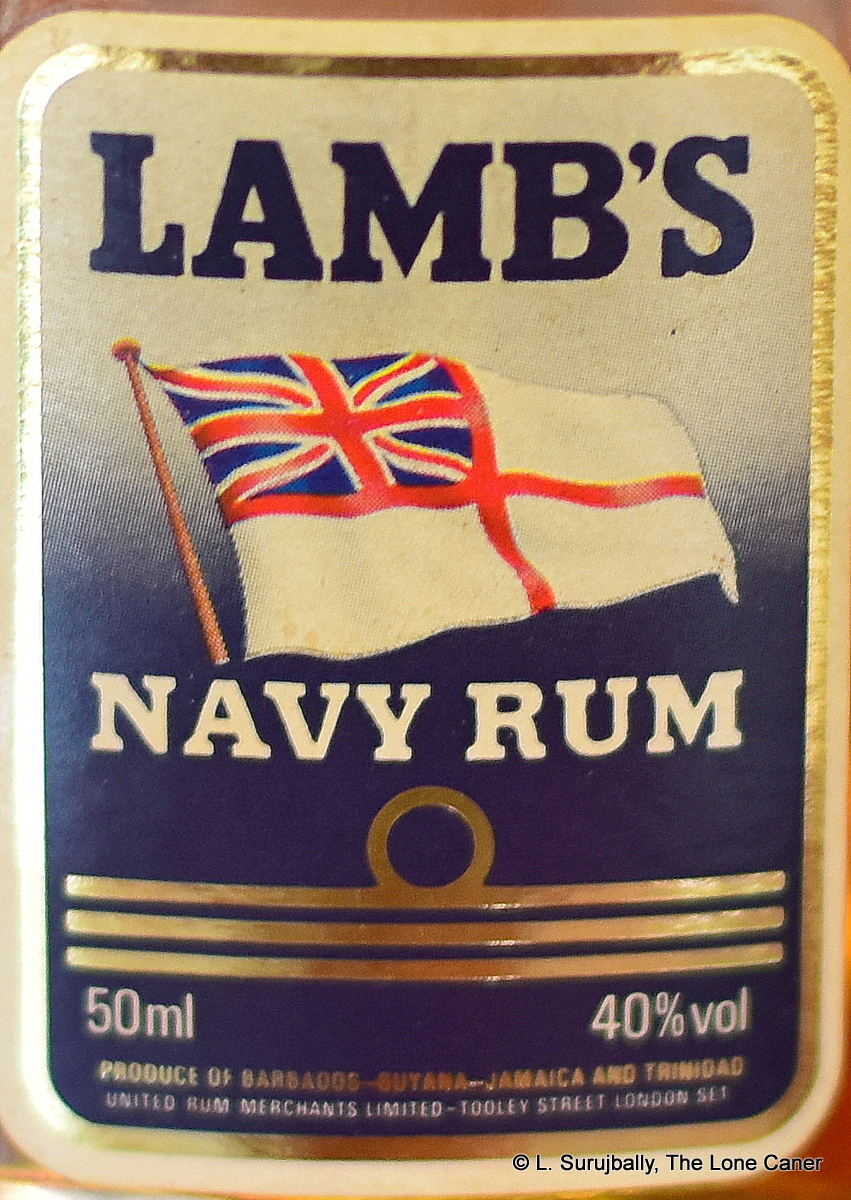 Nose – Quite a bit different from the strongly focussed Demerara profile of the Navy 70º we looked at before – had the label not been clear what was in it, I would have not guessed there was any Jamaican in here. The wooden stills profile of Guyana is tamed, and the aromas are prunes, licorice, black grapes and a light brininess. After a while some salt caramel ice cream, nougat, toffee and anise become more evident. Sharp fruits are held way back and given the absence of any kind of tarriness, I’d hazard that Angostura provided the Trinidadian component.

Palate – Sweet, medium-thick and quite pungent, which is nice for a 40% rum. It’s mostly pears, anise and caramel that jockey for attention – everything else is a second order effect. It’s briny off and on but not of sea water or an olive, more like butter or caramel. It’s nicely dry, with some dark fruits coiling restlessly around and about, all quite indeterminate.

Finish – Quite nice. One does not expect a long denouement with a standard strength rum, of course, yet even by that low standard this isn’t bad, being dry, leathery, not very sweet or dark, and some prunes, dates, and blackberries.

Thoughts – It’s a rather tame blend, maybe aged a wee bit, lacking any kind of single-mindedness of taste or smell…which may have been the point, as the official Navy recipe was never a static thing, and (for example) the Jamaican portion kept varying based on the opinions of the day. It’s milder and not overwhelmed by either the funky Jamaican or the dour, wood-forward Demerara components, and that’s its selling point and strength. I do like uncompromising Port Mourant based rums, but this one isn’t half bad for what it is. 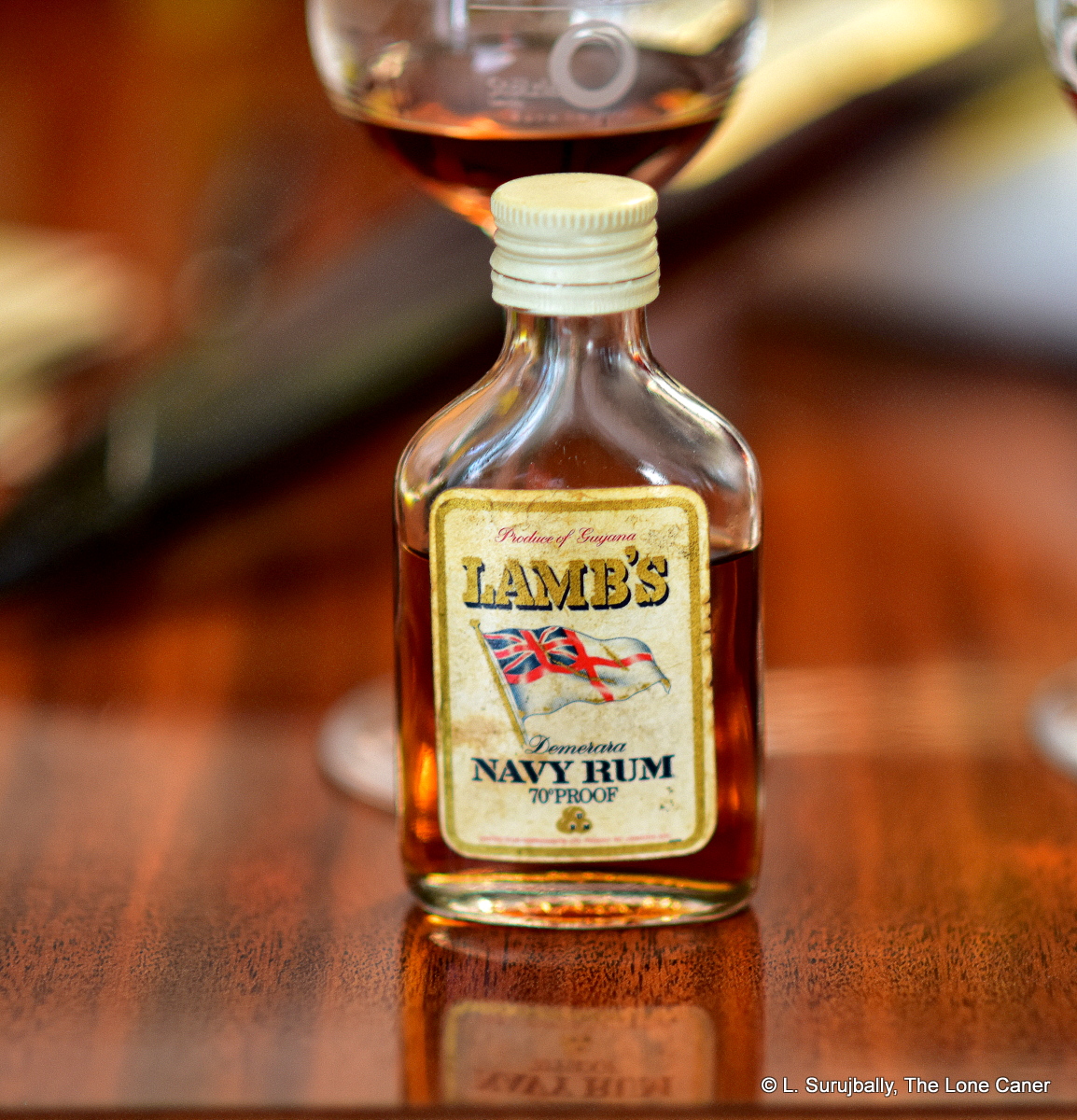 Alfred Lamb started making his signature dark rum from West Indian raw stock in 1849 in London; it was initially aged in cellars below the Thames, which is why you still see occasional bottles of “London Dock” gathering dust on store shelves here or there, rubbing shoulders with various branded Navy rums, white rums and spiced rums, and it’s all a big yawn through these days. The current owner of the Lamb’s name, Pernod Ricard, markets it as a downmarket grocery-store kind of rum, and the days of something like the 1949 Special Consignment are long gone. 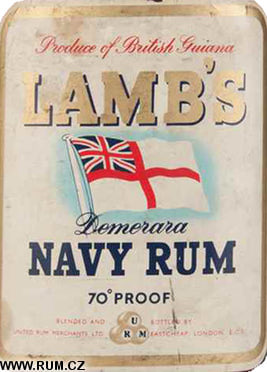 This bottle likely comes from the late 1970s: there is an earlier version noted as being from “British Guiana” that must have dated from the 1960s (Guyana gained independence in 1966) and by 1980 the UK largely ceased using degrees proof as a unit of alcoholic measure; and United Rum Merchants was taken over in 1984, which sets an absolute upper limit on its provenance (the URM is represented by the three barrels signifying Portal Dingwall & Norris, Whyte-Keeling and Alfred Lamb who merged in 1948 to form the company). Note also the “Product of Guyana” – the original blend of 18 different rums from Barbados, Guyana, Jamaica and Trinidad pioneered by Alfred Lamb, seems to have been reduced to Guyana only for the purpose of releasing this one.

Nose – Yes, definitely Guyanese and for sure one of the wooden stills, PM or Versailles. Dark, rich and molasses based, with sawdust, pencil shavings, redolent of caramel, fudge, lemongrass, licorice, citrus, dates, tobacco leaves and green grapes.

Palate – “Thick” is not out of place to describe it. Or maybe “juicy”. It’s sweet, dark, rich and dense with great mouthfeel for standard strength. A mix of both light and dark fruits – pears, peaches, prunes, mint leaves, and fresh pancakes drizzled with syrup.

Finish – Mid length, nothing special, but a nice firm exit.

Thoughts – It’s not the most complex thing around, but if the straightforward pleasures of a mixer or simple sipper are your thing, this won’t disappoint. It’s not trying to redefine Demerara and gives a decent account of Guyana and the stills, if less of the Navy style. Something of a one-trick pony, then, and that it’s a good pony at only that one trick is just our loss. 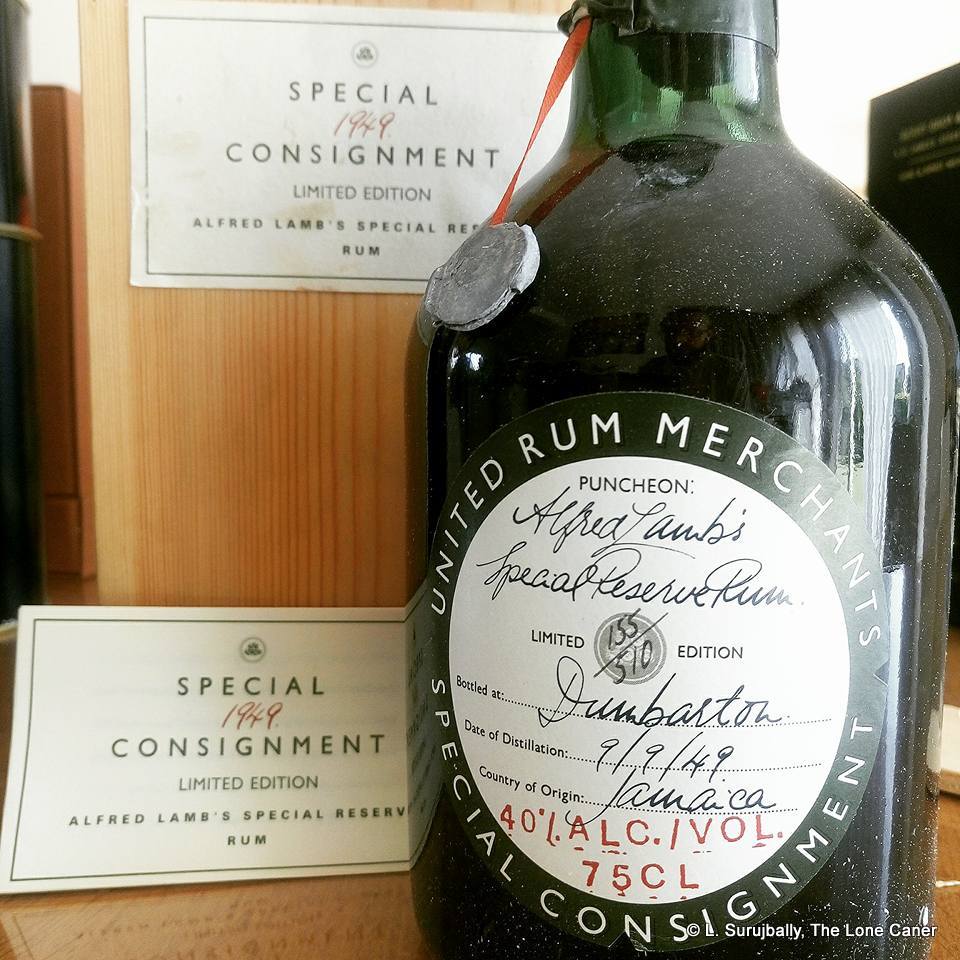 This rum is one of the reasons I love the spirits made so long ago – they shine a light into the way things were back in the day. Alfred Lamb started making dark rum from West Indian bulk rum back in 1849, ageing his barrels in cellars below the Thames and laid claim to making “real” Navy rum. These days the company seems to make supermarket rum more than any kind of serious earth-shaking popskull…but the potential remains, as this rum (almost) points out. It’s issued by United Rum Merchants, who trace their own heritage back to Lyman “Lemon” Hart in 1804 (yes, that Lyman Hart). Back during WW2 and the Blitz (in 1941) Keeling and Lamb were both bombed out of their premises and URM took them under their wing in Eastcheap. It’s a little complicated, but these days Pernod Ricard seems to own the brand and URM dissolved in 2008.

Nose – Well, unusual is a good word to describe this one. The leather of old brogues, well polished and broken in with shoe polish and acetone, perhaps left in the sun too long after a long walk in the Highlands. Old veggies, fruits, bananas, light florals, all perhaps overripe – kinda dirty, actually, though not entirely in a bad way – somehow it gels. Vanilla, brine, a certain meatiness – let’s just call it funk and move on. Wish it was stronger, by the way.

Palate – Ahh, crap, too damned light. I’ve come to the personal realization that I want Jamaicans to have real torque in their trousers and 40% don’t get me there, sorry. Oh well. So…light and somewhat briny, citrus and stewed apples, some flowers again, some sweet of pancake syrup and wet compost, leather. It seems to be more complex than it is, in my opinion. Plus, it’s a bit raw – nothing as relatively civilized as another venerable Jamaican, the Longpond 1941. Still, big enough, creamy enough for its age and strength.

Finish – Pleasingly long for a 40% rum, yay!. Vanilla, leather, some brine and olives and fruits and then it slowly fades. Quite good actually

Thoughts – A solid Jamaican rum, feels younger and fresher than any forty year old has a right to be, even if it doesn’t quite play in the same league as the Longpond 1941. Makes me wish Lamb’s would stop messing around with “everyone-can-drink-it” rums, which are made for everyone, and therefore no-one.