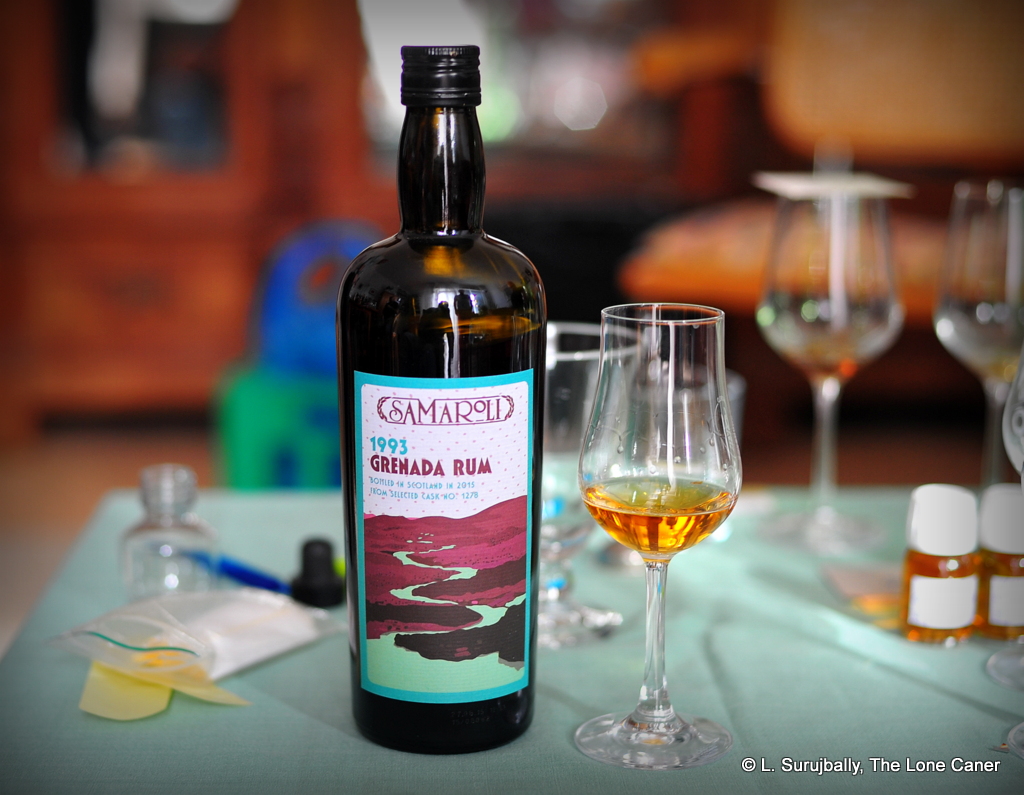 Recently I was observed to be writing more reviews of obscure rums nobody ever hears about (or can get) than the commonly favoured tipple and new releases favoured by the commenterati. That’s a completely fair thing to say, because I do. Not because I want to be behind the times — I’m gutted I couldn’t try the three new pot-still Appletons from Velier so many people are waxing rhapsodical about, for example — it’s more a factor of my current location, and inability to travel and the cancellation of the entire 2020 rumfest season.

It’s also as a somewhat deliberate choice. After all, there are loads of people rendering opinions on what’s out there that’s and new and interesting, so what more could one blogger really add? And so I take advantage of these admittedly peculiar circumstances to write about rums that are less well known, a bit off the beaten track, but no less fascinating. Because there will always be, one day, years from now, questions about such bottles — even if only by a single individual finding a dust-covered specimen on some back shelf someplace, written off by the store or owner, ignored by everyone else. 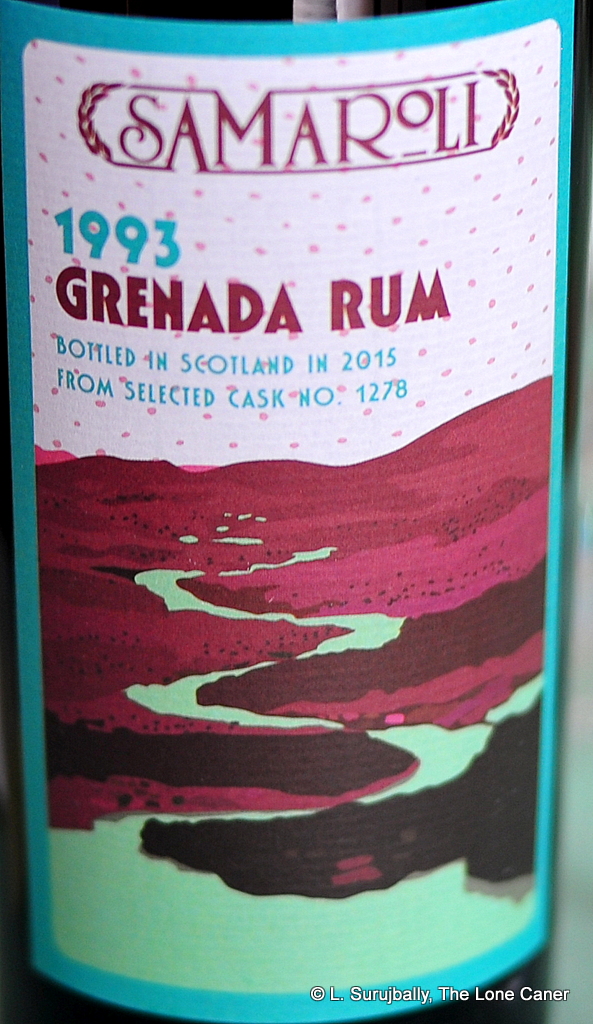 One such is this Samaroli rum sporting an impressive 22 years of continental ageing, hailing from Grenada – alas, not Rivers Antoine, but you can’t have everything (the rum very likely came from Westerhall – they ceased distilling in 1996 but were the only ones exporting bulk rum before that). You’ll look long and hard before you find any kind of write up about it, or anyone who owns it – not surprising when you consider the €340 price tag it fetches in stores and at auction. This is the second Grenada rum selected under the management of Antonio Bleve who took over operations at Samaroli in the mid 2000s and earned himself a similar reputation as Sylvio Samaroli (RIP), that of having the knack of picking right.

I would not suggest, however, that this is entirely the case here. The rum noses decently enough (it clocks in at 45% ABV) and smells pungently sweet, akin to a smoked-out beehive dripping honey into the ashes. There’s caramel toffee, bon bons, cinnamon, white chocolate and a kind of duskiness to the aroma that isn’t bad. After some time additional smells of vanilla and salted caramel ice cream can be detected, but on the whole it’s not very heavy in the fruits department. Some plums and dark berries, and a bare minimum of the tart notes of sharper fruit to balance them off.

The palate is, frankly, something of a disappointment after a nose that was already not all that exciting to begin with. Many of the notes that are present when I smell it return for a subtler encore when sampled: salted caramel ice cream, a dulce de leche coffee, more white chocolate with some nuttiness, honey, caramel, cinnamon, and very few crisp fruits that would have livened up the experience some. Raisins, dates, dried plums is more or less it and I really have no idea what the back label is on about when it refers to “typical Spanish style.” The finish is similarly middle of the road, as if fearing to offend, and gives up a few final notes of cinnamon, chocolate, raisins, plums and toffee, dusted with a bit of vanilla, and that’s about all you’re getting. 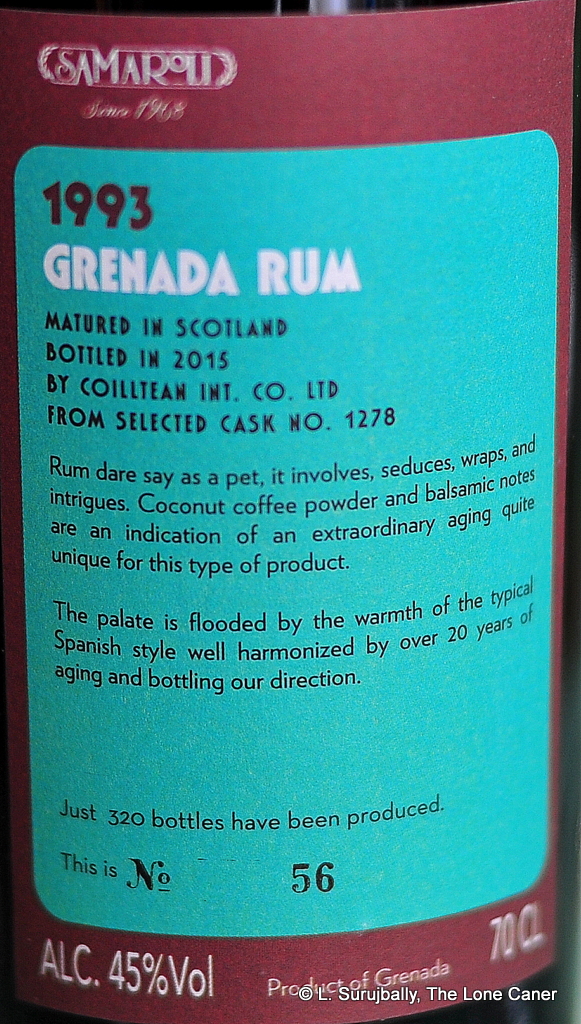 So what to make of this expensive two-decades-old Grenada rum released by an old and proud Italian house? Overall it’s really quite pleasant, avoids disaster and is tasty enough, just nothing special. I was expecting more. You’d be hard pressed to identify its provenance if tried blind. Like an SUV taking the highway, it stays firmly on the road without going anywhere rocky or offroad, perhaps fearing to nick the paint or muddy the tyres.

The problem with that kind of undistinguished anonymity which takes no chances, is that it provides the drinker with no new discoveries, no new challenges, nothing to write home in shock and awe about. To some extent, I’d suggest the rum is a product of its time – in 2005, IBs were still much more cautious about releasing cask-strength, hairy-chested beefcakes that reordered the rumiverse, and were careful not too stray too far from the easy blends which was what sold big time back then. That’s all well and good, but it also shows that those who don’t dare, don’t win … and that’s why this rum is all but forgotten and unacknowledged now (unlike, of course, the Veliers from the same era). In short, it lacks distinctiveness and character, and remains merely a good way to drop two hundred quid without getting much of anything in return. 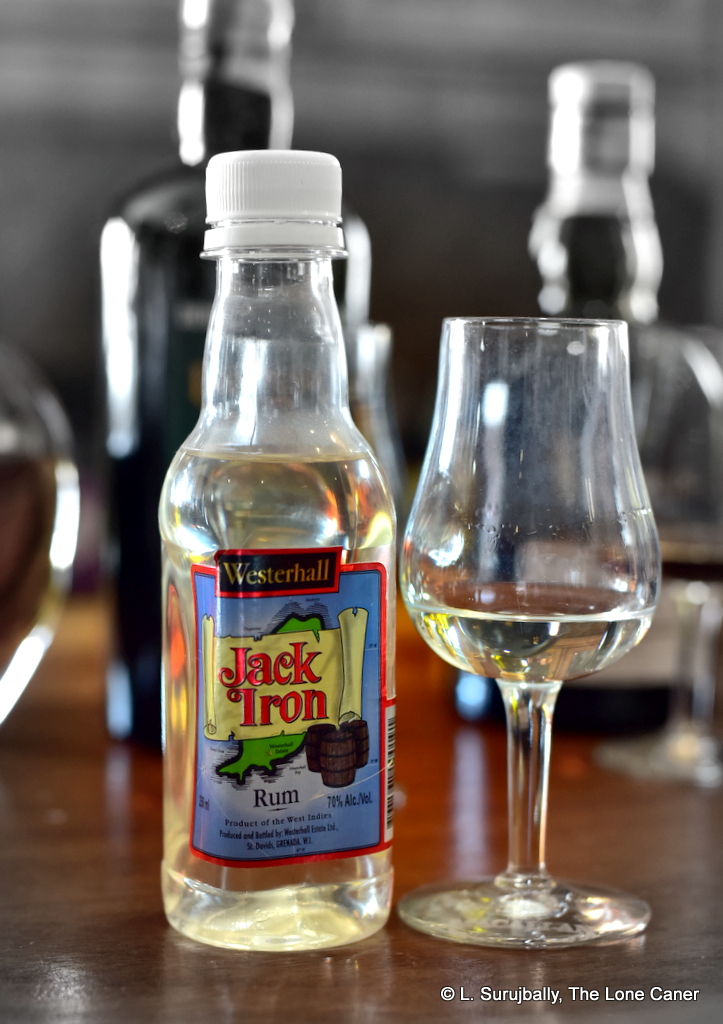 The Jack Iron rum from Westerhall is a booming overproof issued both in a slightly aged and a white version, and both are a whopping 70% ABV. While you can get it abroad — this bottle was tried in Italy, for example — my take is that it’s primarily a rum for local consumption (though which island can lay claim to it is a matter of idle conjecture), issued to paralyze brave-but-foolhardy tourists who want to show off their Chewbacca chests by drinking it neat, or to comfort the locals who don’t have time to waste getting hammered and just want to do it quick time. Add to that the West Indian slang for manly parts occasionally being iron and you can sense a sort of cheerful and salty islander sense of humour at work (see “other notes” below for an alternative backstory).

Truth to tell, the Jack Iron is not strictly a Grenadian rum – even back in the 1990s and probably for long before, it was distilled and slightly aged (three years) at Angostura’s facilities in Trinidad, before being shipped to the Spice Island for final blending and bottling. It had its antecedents in local moonshine brewed in the Grenadines to between 70% and 90%, sometimes spiced up, sometimes not, with water used as a chaser, and was usually referred to as “Jack”. (Apparently there is a 99% version of this rum called “Carriacou 99%!” floating around as well, available only on the eponymous island).

Since we’re talking about an overproof column still product made in an industrial facility with minimal ageing, the pale straw colour is understandable, and one does not go in expecting too much. This makes the initial aromas of the Jack Iron somewhat surprising, because they’re actually quite good. It smelled light, sweet and almost delicate, like raspberries dumped into pear-infused water. However, this is deceptive: it lures you into a false sense of security, and actually it’s the fin of the shark that gotcha. Much more heated and forceful aromas become noticeable after the alcohol burns off – olives, brine, gherkins, some relatively mild fruit (watermelons, pears, papaya) but none of the heavy fleshy ones. 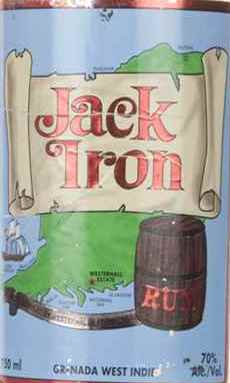 Everything turns on a dime when it’s tasted, where the full force of the proof is brought to bear. It’s hot, fiery, fierce. Alas, that heat also takes much of the taste away as well, so all you get is sharp bite without soft taste (the Neisson L’Esprit 70⁰ Blanc found a way around this, somehow, but not here). Essentially almost all the tastes bar a few that slip through, are killed cold stone dead and it takes some real effort to discern candy floss, very light fruits (same as the nose), vague vanilla, some florals, and even the Angostura 5 YO is better than this (while being much weaker). This does not appreciably change even when water is added, by the way, and while the finish is suitably epic, and you can pick out some marzipan and vanilla and watermelon juice (and that’s if you reach), at the end it’s just long and hot and sharp. And, I confess, boring.

To some extent this rum reminds me less of Angostura’s lightly aged offerings were they to be beefed up, than of the the Marienburg 90 from Suriname, and also St. Vincent’s Sunset Very Strong. The nose is really kind of nice – delicate, herbal, floral, like a velvet-wrapped stilletto; unlike the palate, which is just a sledge, simple, bludgeoning, direct, without subtlety or complexity of any kind. Of course it’s a mix, not a sip, and it would certainly ratchet up anything into which you dump it, so there’s that I suppose.

Like many overproofs, complexity is not what it’s about — it’ll never be an international festival favourite, being the sort of rum best had in the local backcountry or on a bartender’s back shelf. It goes down much better only after a couple of shots (with chaser), when just about everything somebody says becomes a masterpiece of scintillating wit or a blindingly intelligent insight. Just be aware that such a state of affairs doesn’t last into the next morning’s headache, which is really not the rum’s fault, but your own, if you had gone late into the night with your squaddies, daring to drink it like a Grenadian.

When I listed the Jack Iron as one of the 21 strongest rums in the world, Vaughn Renwick on Facebook made this comment: “The history of Jack Iron is murky, but as far as I know from the mid 1900s at least and probably earlier, it was originally a ‘cask rum’ or ‘puncheon rum’ of high but indeterminate strength, shipped directly from Trinidad to Carriacou, a dependency of Grenada. Certainly it was the only place it was available until recently. I believe it was called ‘Jack Iron’ because if you were brave enough to drink it, it was akin to being hit by the iron handle used to turn a car ‘jack’. Because it was shipped in wooden casks it had a light straw colour. Possibly it spent some time in casks in storage after distillation.”