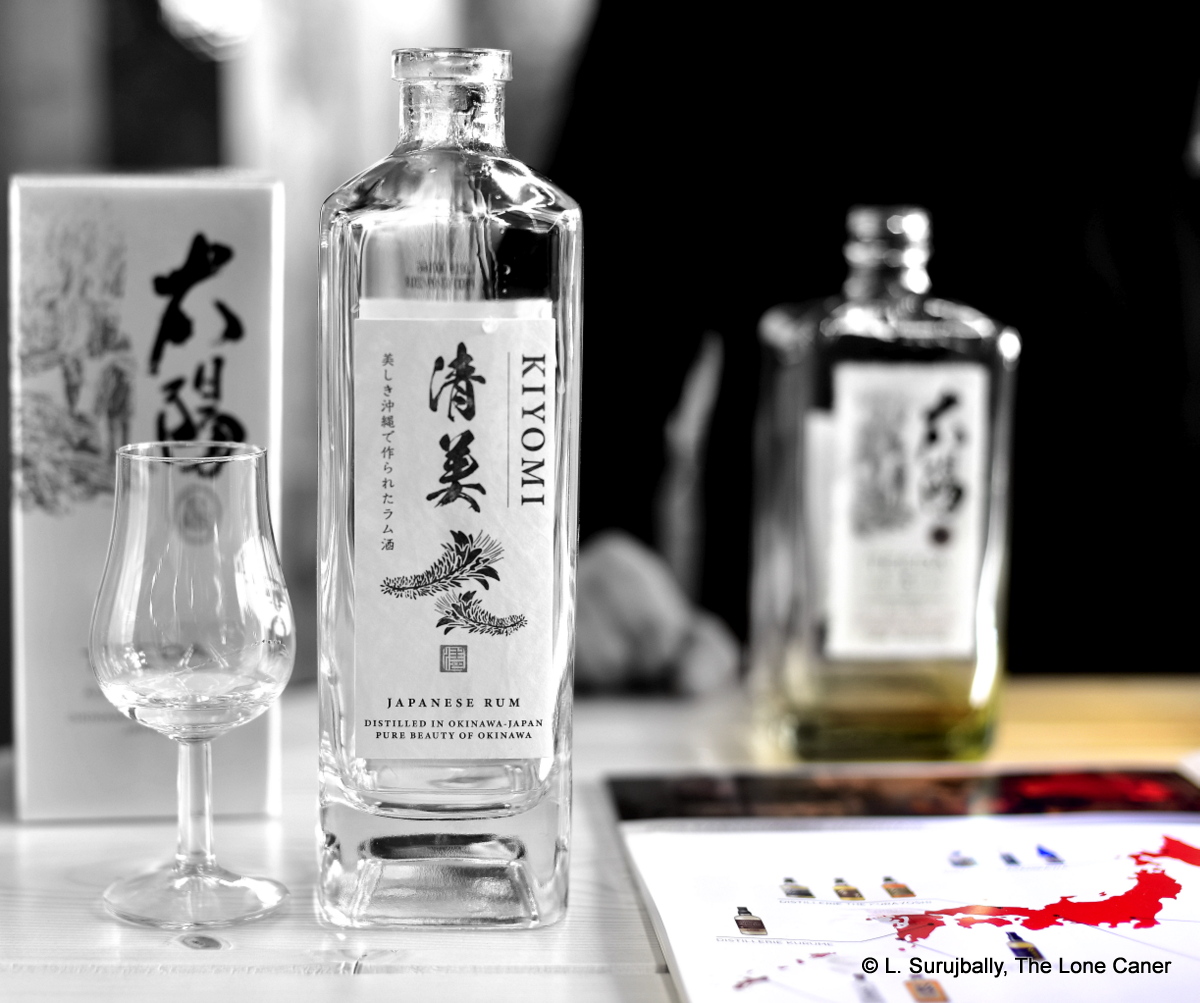 The Kiyomi white rum is made by the Helios Distillery, the same outfit in Japan that makes the very tasty five year old Teeda rum we looked at before. Formed by Tadashi Matsuda in the postwar years (1961) at a time of economic hardship and food privation for Okinawa , the decision was made to distill rum because (a) it could easily be sold to American soldiers stationed there (b) Okinawan sugar was readily available and (c) rice, which normally would have been used to make the more popular local sake, was needed as a food source and could not be spared for alcohol production.

That the company succeeded is evidenced by the fact that it is still in existence, has expanded its operations and is still making rums.  The two most popular are the Teeda 5 YO and the Kiyomi Unaged White, which do not share the same production process: while both source Okinawa sugar cane which is crushed to juice, the Kiyomi rum is fermented for longer (30 days instead of two weeks) and run through a double column still (not the pot).  It is then left to rest (and not aged) in steel tanks for six months and gradually reduced from 60% ABV off the still, to the 40% at which it is bottled.

I’ve never been completely clear as to what effect a resting period in neutral-impact tanks would actually have on a rum – perhaps smoothen it out a bit and take the edge off the rough and sharp straight-off-the-still heart cuts. What is clear is that here, both the time and the reduction gentle the spirit down without completely losing what makes an unaged white worth checking out.  Take the nose: it was relatively mild at 40%, but retained a brief memory of its original ferocity, reeking of wet soot, iodine, brine, black olives and cornbread. A few additional nosings spread out over time reveal more delicate notes of thyme, mint, cinnamon mingling nicely with a background of sugar water, sliced cucumbers in salt and vinegar, and watermelon juice. It sure started like it was out to lunch, but developed very nicely over time, and the initial sniff should not make one throw it out just because it seems a bit off.

It was much more traditional to taste – soft, gentle, quite easy to sip, the proof helping out there. After the adventurousness of the nose which careened left and right and up and down like your head was a pinball machine, this was actually quite surprising (and somewhat disappointing as well).  Anyway it lacked any kind of aggressiveness, and tasted initially of glue, brine, olives, gherkins and cucumbers – the ashes and iodine I had sniffed earlier disappeared completely. It developed with the sweet (sugar water, light white fruits, watermelon juice) and salt (olives, brine, vegetable soup) coming together pleasantly with light florals and spices (cinnamon, cardamom, dill), finishing off with a sort of quick and subdued exit that left some biscuits, salt crackers, fruits and rapidly disappearing spices on the tongue and fading rapidly from memory.

This is a rum that started with a flourish but finished…well, not in first place.  Though its initial notes were distinct and shown off with firm emphasis, it didn’t hold to that line when tasted, but turned faint, and ended up taming much of what made it come off as an exciting drink at the inception. That said, it wasn’t a bad one either: the integration of the various notes was well done, I liked most of what I did taste, and it could as easily be a sipping drink as a mixer of some kind.  What makes it noteworthy in this respect is that it doesn’t entirely become some sort of anonymously cute and light Cuban blanco wannabe you forget five minutes after putting down the glass, but retains a small spark of individuality and interest for the diligent. A shame then, that all this makes you think of, is that you’re holding an unfulfilled and unfinished promise — a castrated clairin  if you will — in your hand. And that’s a crying shame for something that’s otherwise so well made.