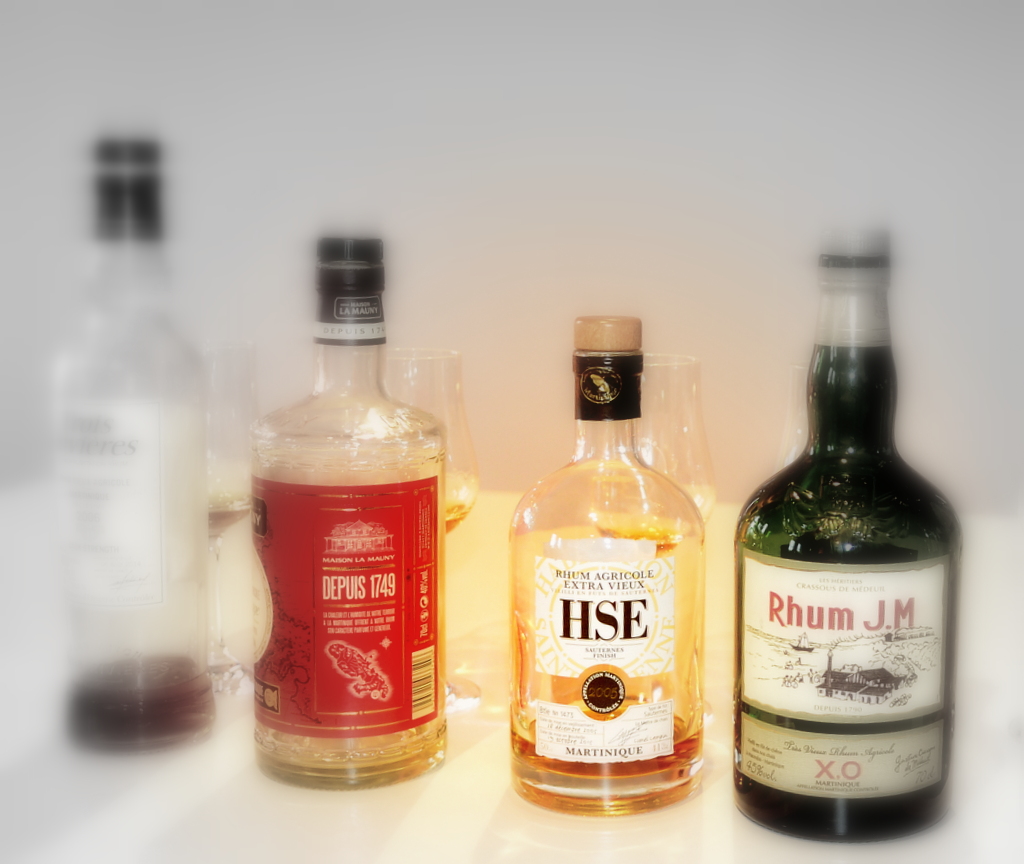 Just to reiterate some brief details about HSE (Habitation Saint-Étienne), which is located almost dead centre in the middle of Martinique. Although in existence since the early 1800s, its modern history properly began when it was purchased in 1882 by Amédée Aubéry, who combined the sugar factory with a small distillery, and set up a rail line to transport cane more efficiently (even though oxen and people that pulled the railcars, not locomotives). In 1909, the property came into the possession of the Simonnet family who kept it until its decline at the end of the 1980s. The estate was then taken over in 1994 by Yves and José Hayot — owners, it will be recalled, of the Simon distillery, as well as Clement — who relaunched the Saint-Étienne brand using Simon’s creole stills, adding snazzy marketing and expanding markets.

This particular rum, then, comes from a company with a long history and impeccable Martinique pedigree. It is an AOC millésimé – a rum issued in relatively small quantities, from the output of a specific year’s production, considered to be a cut above the ordinary (2005 in this case) and finished in Sauternes casks. 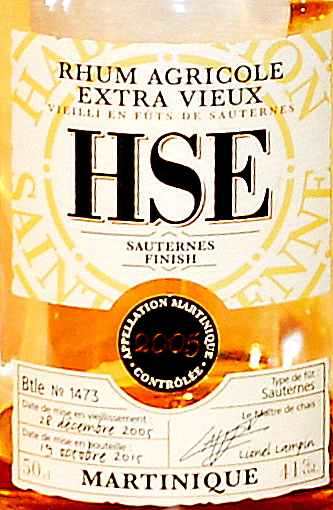 Given that it is nine years tropical ageing plus another year in the Sauternes casks, I think we could be expected to have a pretty interesting profile — and I wasn’t disappointed (though the low 41% strength did give me pause). The initial smells were grassy and wine-y at the same time, a combination of musk and crisp light aromas that melded well. There were green apples, grapes, the tart acidity of cider mixed in with some ginger and cinnamon, a dollop of brine and a few olives, freshly mown wet grass and well-controlled citrus peel behind it all.

Well now. That was a pretty nifty nose. How did the palate rate?

Very well indeed, I thought. It was a smooth and solid piece of work for its proof point, with clear, firm tastes proceeding in sequence like a conga line – light acetones and flowery notes to begin with, then bubble gum, ripe cherries and plums. The profile proceeded to display some sharpness and herbals — citrus, cider, well-aged sharp cheddar, a touch of apricots and almost-ripe peaches together with softer honey and ginger. What distinguished it and made it succeed, I think, is the delicate balancing act between sweetness and acidity (and a trace of salt), and even the finish – grapes, honey, cane juice and wet grass for the most part – displayed this well assembled character. It impressed the hell out of me, the more so since I walked in expecting so much less.

The other day I wrote about a similarly-aged, light rum from Don Q, which I remarked as being somewhat too easy and unchallenging, bottled at a low 40%; and while competently made, simply not something that enthralled me.

On that basis, you might believe that I simply disdain any and all such low-proof rums as being ultimately boring, but now consider this 41% agricole from Habitation Saint-Étienne as a response. It emphatically demonstrates to anyone who believes standard strength can only produce standard junk, that a rum can indeed be so relatively weak and still have some real quality squirming in its jock. And with respect to the HSE 2005, that’s a statement I can make with no hesitation at all, and real conviction. 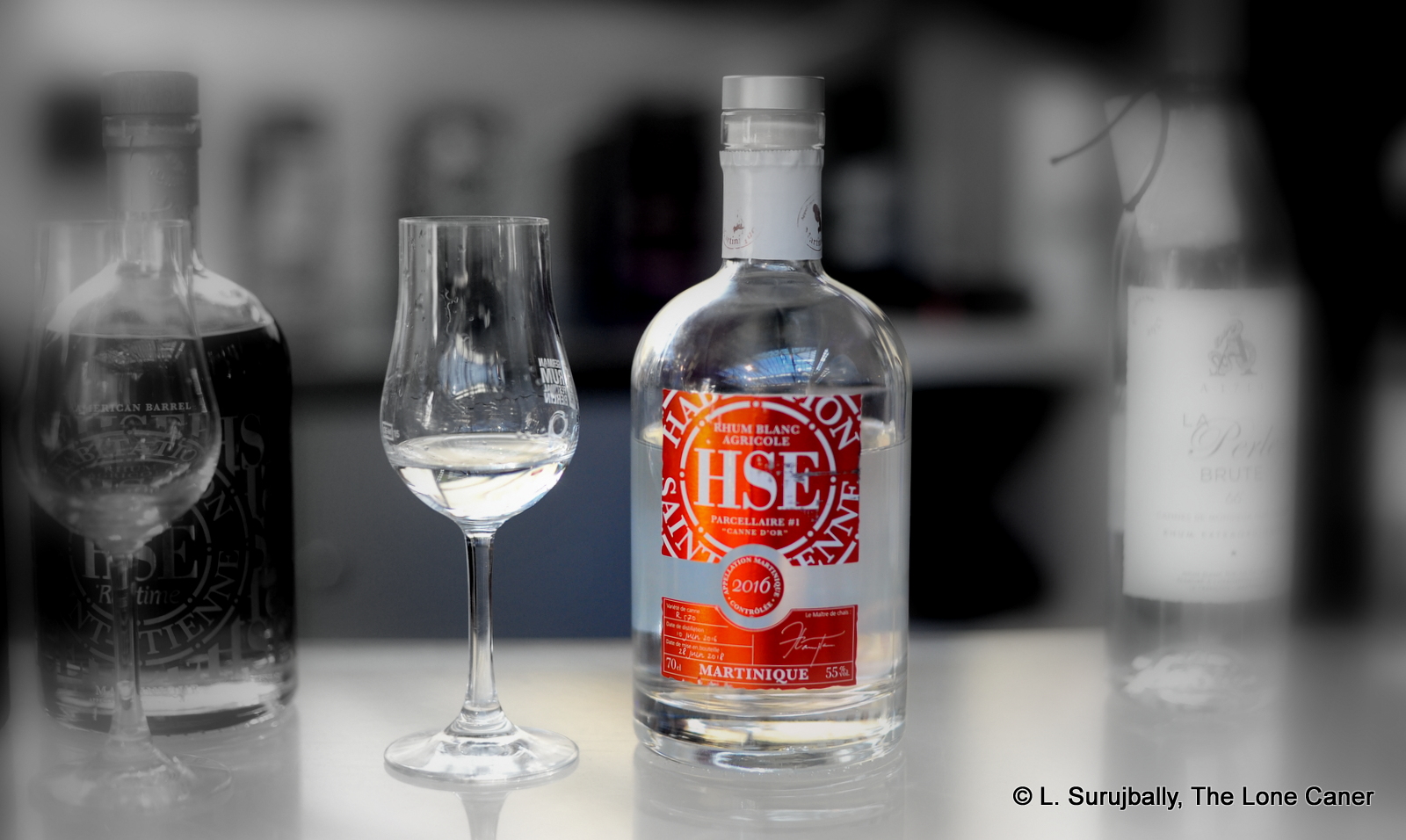 White rhums – or blancs – were not products I paid much attention to back in the day, but over the last five years they have continually risen in my estimation, and now I consider them one of the key building blocks of the entire category. Not the lightly-aged, blandly filtered and softly murmuring Spanish-style cocktail staples, you understand – those I regard with relative indifference. No, I mean stuff like the Mexican Paranubes, the Haitian Le Rocher, the Guyanese Superior High Wine, Japanese Nine Leaves Clear, Tahitian Mana’o White or the Surinamese Toucan White, to say nothing of the new crop out of Asia – Samai, Issan, Laodi, Sampan, Chalong Bay…

What elevates these blancs and all their cousins above the regular run of whites is the way they often maintain a solid connection to the distillate of origin and the land from which they came. They are usually unaged and unfiltered, commonly around 50% or better. Sometimes they’re raw and pestilential and shockingly rude, at other times they’re almost placid, hiding their bright tastes and clear profiles behind a wall of easy and deceptive complexity that takes time to tease out properly (and for both reasons causes them to be occasionally under-appreciated, I think).

Which brings me to the 55% ABV Habitation Saint-Étienne (HSE) Rhum Blanc Agricole that was distilled in Martinique in 2016 and bottled in 2018 (it rested in steel tanks for the duration and can therefore be seen as unaged). We haven’t talked about HSE for a while, but that doesn’t mean that the Martinique brand has been resting on its laurels, because it continues to produce much good rhum – all AOC compliant – and even taken the whites in a new direction. In this case, perhaps channelling Velier’s Uitvlugt East Field 30 from all those years ago, they selected a special type of sugar cane (canne d’or says the bottle, or “gold cane”, varietal designation R570) not just from their sugar estate in the middle of Martinique, but from a specific part of it – the Verger and Coulon plots of land, issued as a rhum they call Parcellaire #1. So it’s a sort of micro version of HSE as a whole, showcasing a very small part of its terroire. 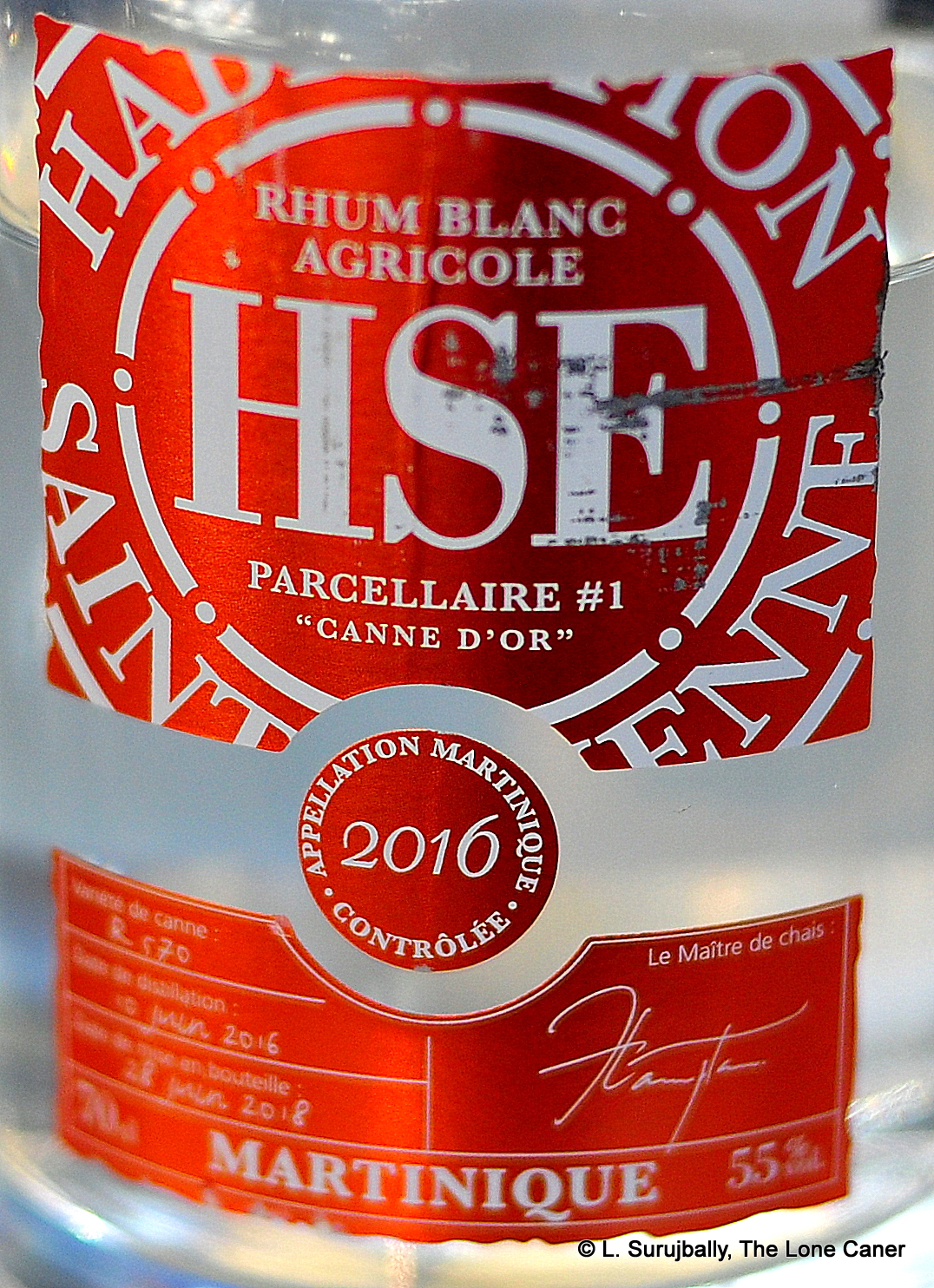 Aside from HSE, Longueteau, or the new kid on the island block — A1710 and their white La Perle — such atomized drilldowns into smaller subunits of an estate are almost unknown…but they are intriguing to say the least (even though it may all just be cool marketing – I like to think otherwise). Fortunately the way it smelled and tasted skated over such concerns. The nose, for example, was quite fragrant, starting off with slightly rotten fruits (bananas), rubber, sawdust, set to a background of soft wax candle, all very restrained. Overall it was a little sweet and relaxed, and as it opened, additional notes of nuts, cereals, almonds and nougat came forward. There was also a hint of olives, brine, pineapple, sweet green peas and ripe oranges in an excellent melange that combined themselves very well, without any single aspect being particularly dominant.

Blanc agricoles’ tastes are usually quite distinct, showing variation only in the details. This one was slightly different — very smooth, very light, the usual herbs and light citrus and grasses starting things off, just less crisp than one might be expecting. This seemed to be kind of nothing-in particular, but hold on a bit — the other, more complex flavours started to creep out. Dill, sugar water, olive oil, cucumbers, watermelon, light pimentos and gherkins, all sweet enough not to be off-putting, salty/sour enough for some character. I thought it was really quite tasty, giving aged offerings from the same house some serious competition, and finishing things off with a fade that provided last memories of sweet sugar water, light delicate notes of cumin and watermelon and papaya.

Does that all work? Are the specific plots of origin really that clear? I suggest that as a showcase for such a tiny bit of land, for the general rum drinker, not really. The differences between the regular run of blancs from HSE and this one can be chalked up to miniscule divergences deriving from batch variation rather than anything so refined. Admittedly though, I’m not a professional sommelier, and lack the experience such people bring to sensing gradations of wine hailing from neighboring vinyards in France – so someone with a more finely tuned snoot may take more away from this than I did.

But I liked it. I liked it a lot. Above, I wrote that really good whites are either cheerfully rude or deceptively polite: this one tilts slightly more towards the latter while still remembering its objurgatory antecedents. It’s a enormously drinkable dram, near perfect strength, with wonderfully delicate and strong tastes mixing up both sweet and salt in a terrific white rhum. You could drink it alone or mix it as you please, and you’d enjoy it either way, with nothing but a nod of appreciation for what HSE have achieved here with such seeming effortlessness. And for its price? This thing may just be an undiscovered steal.

The Habitation Saint-Étienne is located almost dead centre in the middle of Martinique. Although in existence since the early 1800s, its modern history properly began when it was purchased in 1882 by Amédée Aubéry, an energetic man who combined the sugar factory with a small distillery, and set up a rail line to transport cane more efficiently (even though oxen and people that pulled the railcars, not locomotives). In 1909, the property came into the possession of the Simonnet family who kept it until its decline at the end of the 1980s. The estate was then taken over in 1994 by Yves and José Hayot — owners, it will be recalled, of the Simon distillery, as well as Clement — who relaunched the Saint-Étienne brand using Simon’s creole stills.