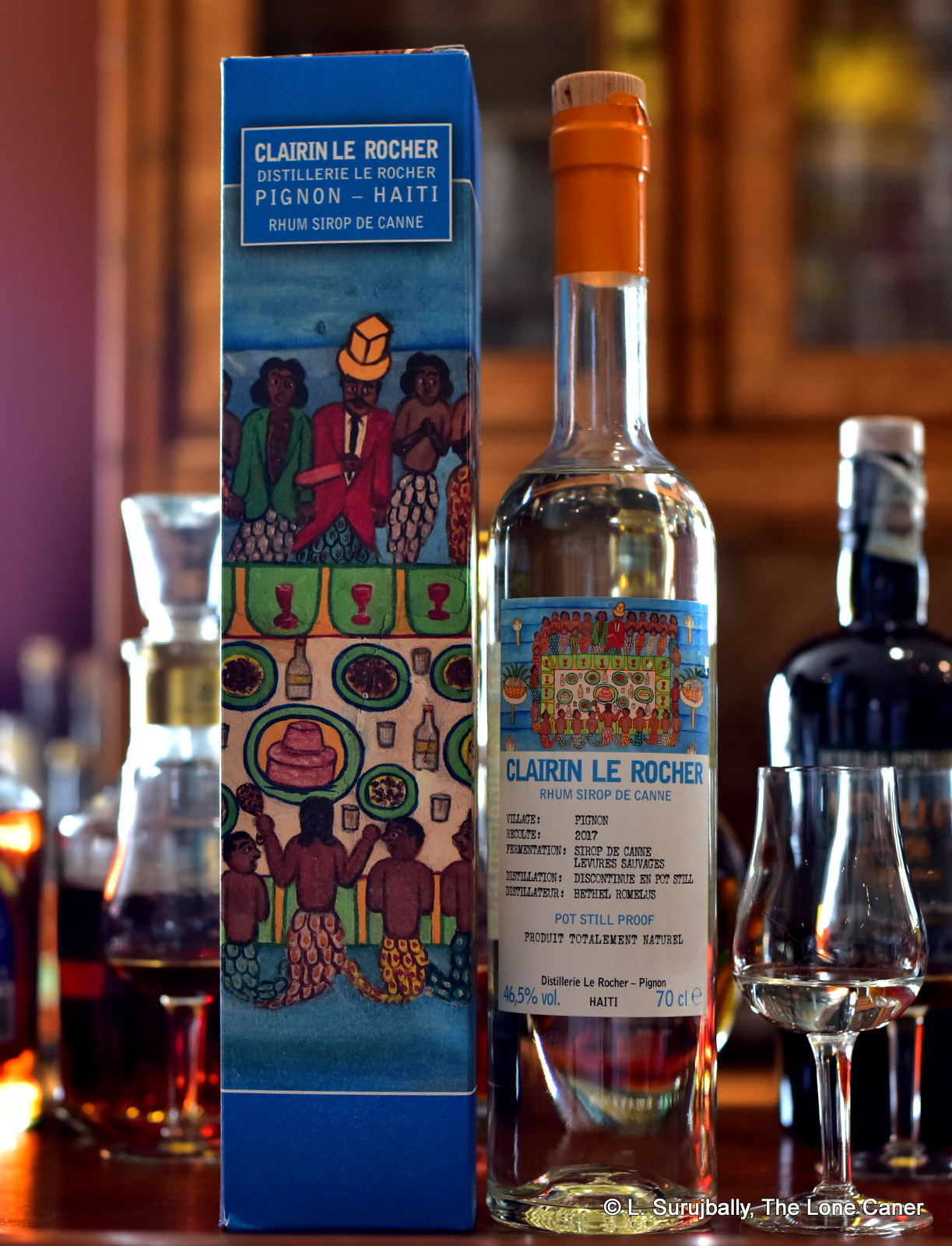 Plastic.  Lots and lots of plastic.  And rubber. The clairin “Le Rocher” is a hydrocarbon lover’s wet dream, and if you doubt that, just take a gentle sniff of this Haitian white.  It is one of the richest whites from Haiti I’ve managed to try, and the best part is, those opening notes of the nose don’t stop there – they develop into a well balanced combination of acetone, salt, soya, and a spicy vegetable soup, into which a cut of jerk chicken thrown in for good measure to add some depth (I swear, I’m not making this up).  And if that isn’t enough, half an hour later you’ll be appreciating the watermelons, sugar water and light cinnamon aromas as well.  This rum is certifiable, honestly – no unaged white should ever be able to present such a delightfully crazy-ass smorgasbord of rumstink, and yet, here it is and here it reeks.  It’s pretty close to awesome. 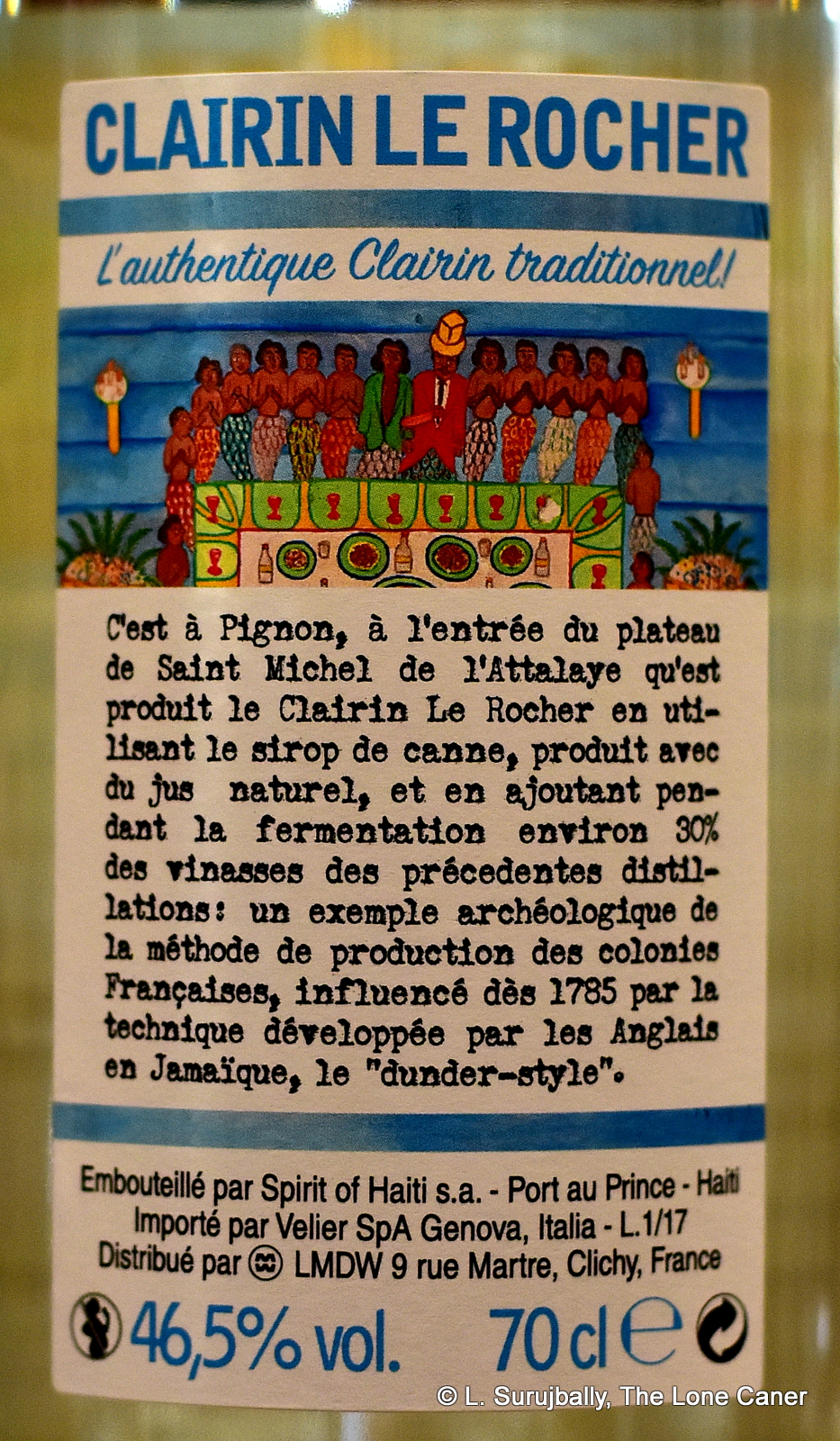 Sometimes a rum gives you a really great snooting experience, and then it falls on its behind when you taste it – the aromas are not translated well to the flavour on the palate.  Not here. In the tasting, much of the richness of the nose remains, but is transformed into something just as interesting, perhaps even more complex. It’s warm, not hot or bitchy (46.5% will do that for you), remarkably easy to sip, and yes, the plasticine, glue, salt, olives, mezcal, soup and soya are there.  If you wait a while, all this gives way to a lighter, finer, crisper series of flavours – unsweetened chocolate, swank, carrots(!!), pears, white guavas, light florals, and a light touch of herbs (lemon grass, dill, that kind of thing). It starts to falter after being left to stand by itself, the briny portion of the profile disappears and it gets a little bubble-gum sweet, and the finish is a little short – though still extraordinarily rich for that strength – but as it exits you’re getting a summary of all that went before…herbs, sugars, olives, veggies and a vague mineral tang.  Overall, it’s quite an experience, truly, and quite tamed – the lower strength works for it, I think.

Clairins no longer need much introduction.  Velier’s been promoting them up and around the world, people have been shuddering and cheering about their profiles in equal measure for years now.  We know what they are. What we don’t know is the producers and individual methods. Here’s what I know: Le Rocher (“The Rock”, named after Matthew’s injunction in 7: 24-27 not to build on sand) is the product of Bethel Romelus, whose little op is located in the village of Pignon, about an hour’s jouncing away from St Michel where Michel Sajous fires up the Sajous. Le Rocher is different from the other clairins I’ve looked at so far in that it is made from sugar cane juice from three different varieties of cane, which is boiled down to syrup.  It’s fermented naturally, with maybe a 1/3 of the syrup being made from previous vinasses, then run through a discontinuous pot still, before being bottled as is. No ageing, no dilution, no filtration, no additions. A pure, natural, organic rum for all those whole drool over such statistics. 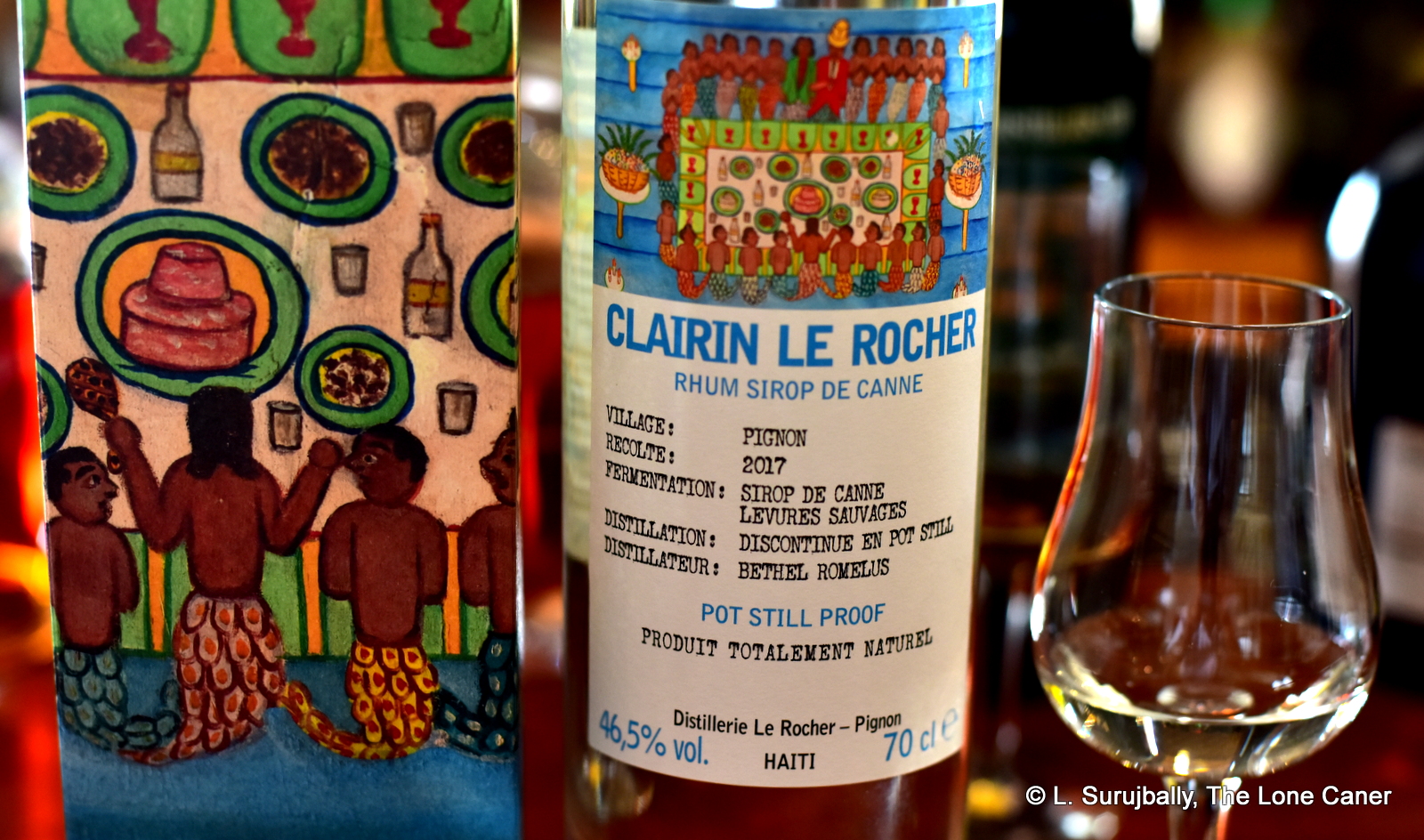 Personally, I’m impressed with the rum as a whole, but if you disagree, I fully understand the source of your doubt – you gotta be into unaged, unhinged whites to be a fanboy of this stuff – for me, that’s catnip, for you, perhaps not so much. Still, If I had to rate the clairins which Velier is putting out the door, I’d say the Sajous remains the most certifiable, the Casimir the most elegant, the Vaval the easiest for its strength.  But the Le Rocher….it’s perhaps the most approachable for the average Joe who wants to know what the fuss is all about and is willing to try one, but is cautious about mucking around with the >50% sarissas of the first three. By going to a lower ABV, by taming a remarkable panoply of potent and pungent smells and tastes, by changing (slightly) the way it’s made, the Le Rocher is setting a standard as high as its creole-still cousins, and if your tastes bend in this direction, it’s definitely worth adding to your collection of whites, and clairins.