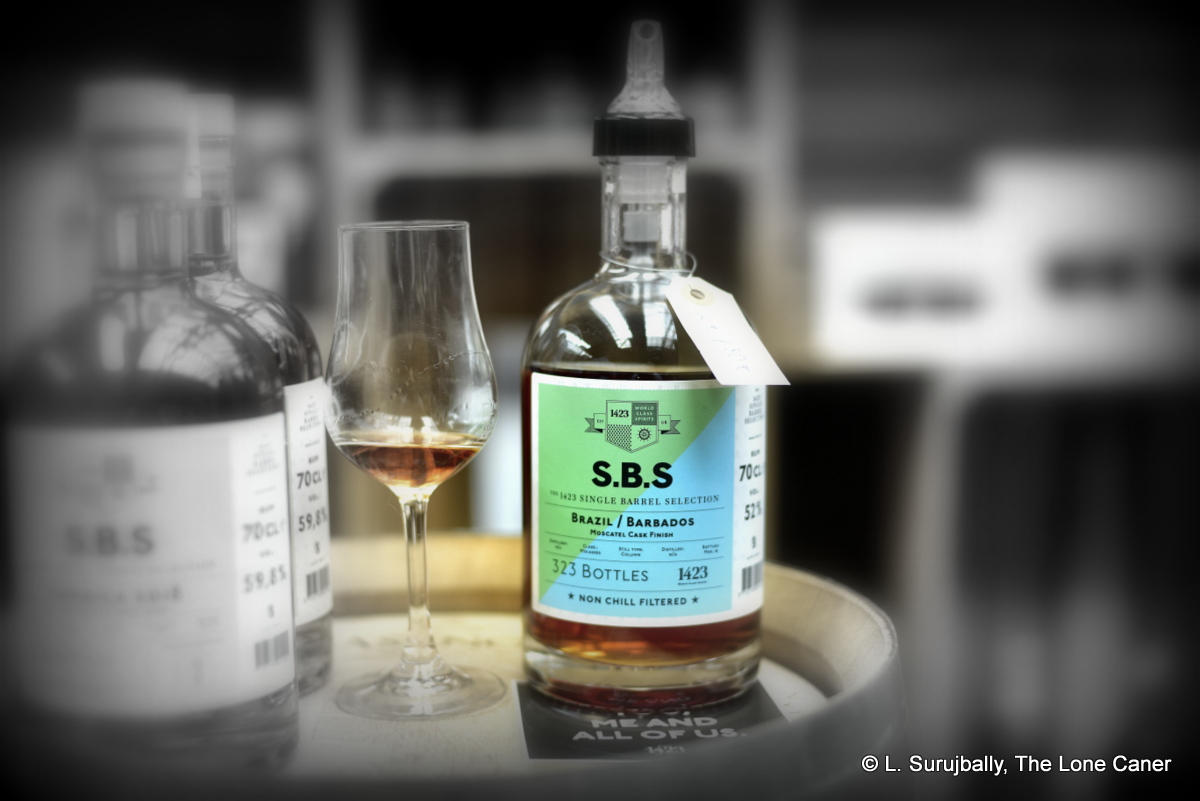 It’s not often we see a multi-country or multi-style blend released by an independent bottler. The trend in IBs in recent years has more been towards the exacting individuality of a single cask from a single place (or a single still, in the case of the Guyanese rums). And that makes sense, especially for up-and-coming new micro-indies, who work with one barrel at a time, for economic reasons if nothing else.

That hasn’t stopped some companies from trying to push the envelope, of course, in the never ending Red Queen’s race to wring a few extra points of taste out of a barrel. Finishes or second maturations or fancy-cask ageing regimes have been the most common method and have grained broad (though not always uncritical) acceptance — that technique is practiced by many companies, old and new, large and small (like Renegade, or Foursquare). Blends from multiple stills, pot and column, are more common now than they used to be. And in some cases, blends have indeed been made by IBs, though quite specifically — multiple barrels from a single distillery. Velier, Rum Nation and others have all practiced this, quite successfully. In a more restricted fashion, they follow the blending practices of the large international producers who keep their house marques stable for long periods and deal in hundreds or thousands of barrels.

Occasionally this tried and true recipe has been tampered with more fundamentally. Navy rums from whoever have mixed up Guyanese, Jamaican and Trini pieces in differing proportions on an effort to cash in on the famed profile. A few brave souls have messed around with different “style” blends, like mixing British and French island rums, or bringing Spanish-style rons to the party. The winning entry so far might be Ocean’s Distillery, which mixed nine different rums from across the Caribbean to produce their Atlantic Edition, for example. 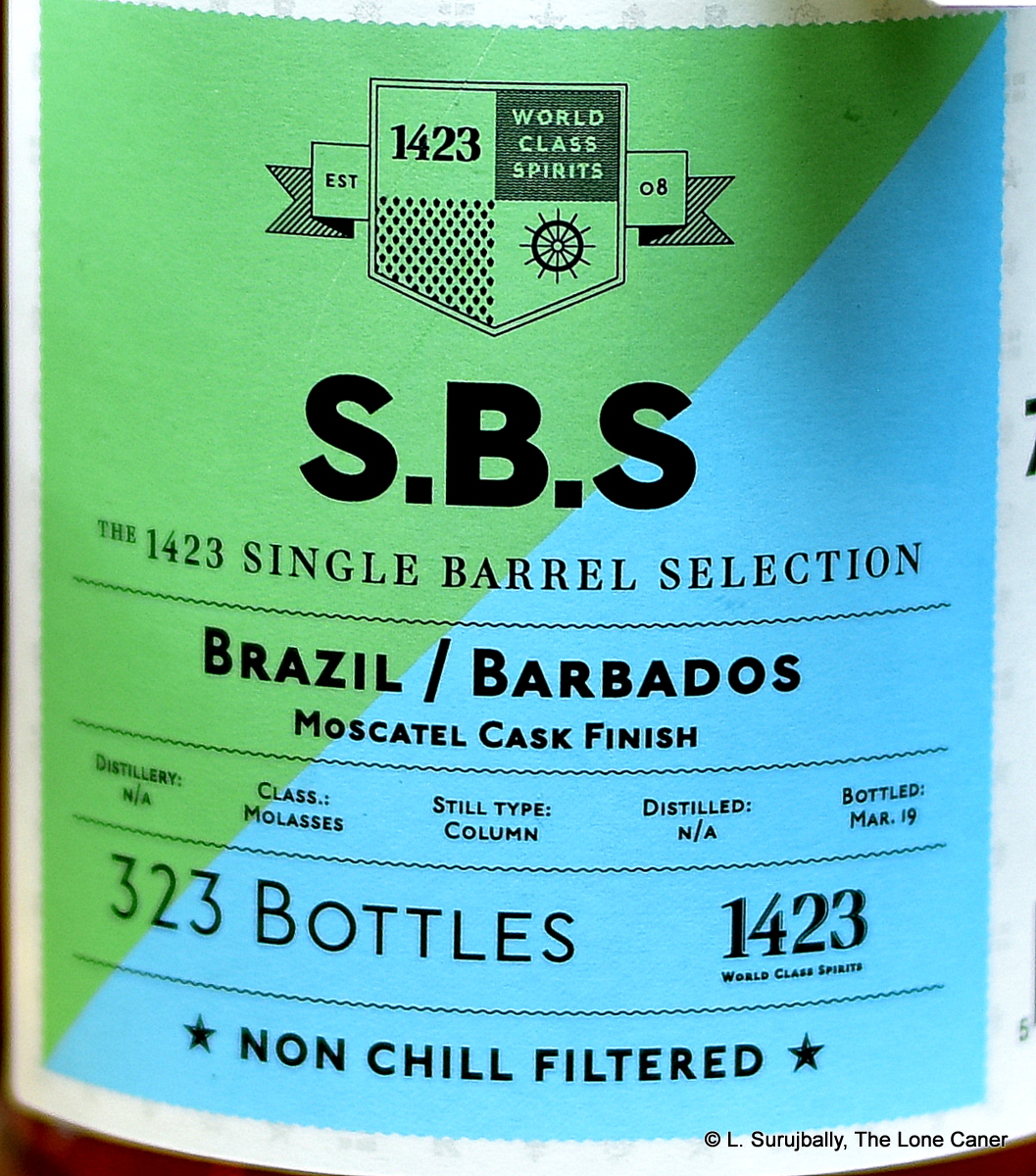 1423, the Danish indie, has taken this concept a step further with their 2019 release of a Brazil / Barbados carnival — it comprised of 8- and 3-year old Foursquare rums (exact proportions unknown, both column still) to which was added an unaged cachaca from Pirassununga (they make the very popular “51” just outside Sao Paolo), and the whole thing left to age for two years in Moscatel wine casks for two years, before being squeezed out into 323 bottles at 52% ABV.

What we would expect from such an unusual pairing is something of an agricole-Bajan marriage. Those are devilishly tricky to bring off, because the light, clean, crisp cane juice taste of an unaged cachaca needs careful tending if it wants to balance itself off against the molasses profile of an aged column-still Foursquare.

What surprised me when nosing it, is how little of the cachaca was noticeable at all – because it was new make spirit none of those peculiar Brazilian woods were part of the aromas, but neither was any sort of serious cane juice clarity. I smelled caramel, chocolates, a bit of light lemon zest, some ginger, and weak molasses. When rested somewhat longer, there were dates, brine, some low-key fruity notes, brown sugar, even a touch of molasses. Were you to sniff it blind you would not be entirely sure what you were getting, to be honest. Not a Barbados rum, for sure.

All this did not entirely work for me, so I turned to the tasting, where tawny brown flavours mixed themselves up in abundant profusion. The palate was not sweet or clear, so much, but like having a dessert meal of dates, nuts, nougat, and a strong latte doing a tango with a weak mocha. The moscatel wine finish was problematic because here it become much more assertive, and provided a sweet red-grape and floral background that contradicted, rather than supported, the softer muskier flavours which had come before. And as before, separating out the Barbados component from the Brazilian one ended up being an exercise in frustration, so I gave up and concentrated on the finish. This was relatively tame, medium long, mostly latte, breakfast spices, ginger, some pears, nothing really special.

When I asked why such an odd blend, Joshua Singh of 1423 remarked that they had such success with a Calvados aged rum in a previous advent calendar, that they thought they would try expanding the concept, and more were likely coming in the years ahead. Clearly 1423 were after a more adventurous taste-profile, and wanted to push things, go in interesting directions. Well…“interesting” this certainly was. “Successful”, not so much, unfortunately. But for a company that has bottled as many good rums as they have, I think it might be worth following them down a dead-end rabbit hole once or twice, for the destination at least, if not the journey.