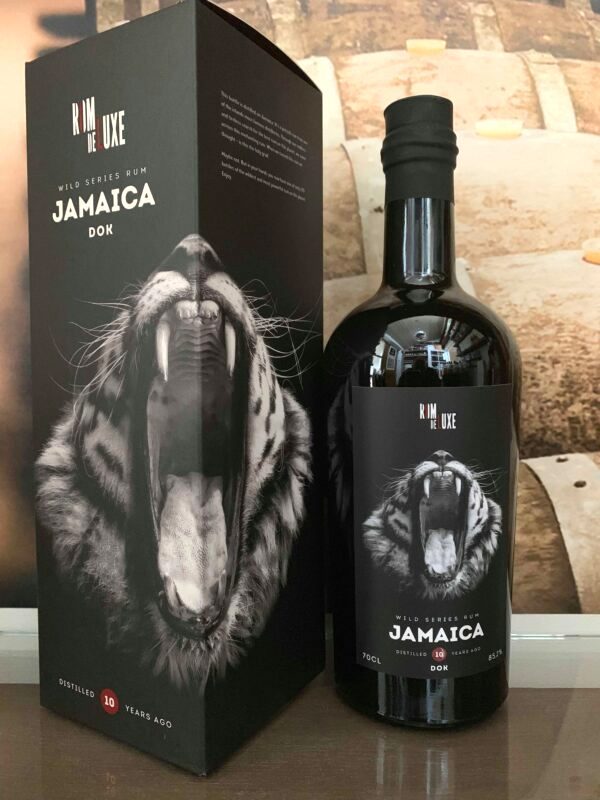 Romdeluxe in Denmark is at this point (2019) more a commercial rum club that makes private label bottlings and runs promotions around the country, than a true independent bottler — but since they do several releases, I’ll call them an indie and move right on from there. Earlier, in May 2019, they lit up FB by releasing this limited-edition high-ester funk-bomb, the first in their “Wild Series” of rums, with a suitably feral tiger on the label. I can’t tell whether it’s yawning or snarling, but it sure looks like it can do you some damage without busting a sweat either way.

This is not surprising. Not only is this Jamaican bottled at one of the highest ABVs ever recorded for a commercially issued rum – growling in at 85.2%, thereby beating out the Sunset Very Strong and SMWS Long Pond 9 YO but missing the brass ring held by the Marienburg – but it goes almost to the screaming edge of Esterland, clocking in, according to the label, at between 1500-1600 g/hlpa (the legal maximum is 1600)….hence the DOK moniker. Moreover, the rum is officially ten years old but has not actually been aged that long – it rested in steel tanks for those ten years, and a bit of edge was sanded away by finishing it for three months in small 40-liter ex-Madeira casks. So it’s a young fella, barely out of rum nappies, unrefined, uncouth and possibly badass enough to make you lose a week or two of your life if you’re not careful.

Knowing that, to say I was both doubtful and cautious going in would be an understatement, because the rum had a profile so ginormous that cracking the cap on my sample nearly lifted the roof of of the ten-storey hotel where I was tasting it (and I was on the second floor). The nose was, quite simply, Brobdingnagian, a fact I relate with equal parts respect and fear.

The crazy thing was how immediately sweet it was – a huge dose of fleshy fruits bordering on going bad for good, creme brulee, sugar water, honey, raisins and a salted caramel ice cream were the first flavours screaming out the gate (was this seriously just three months in Madeira?). It was huge and sharp and very very strong, and was just getting started, because after sitting it down (by the open window) for half an hour, it came back with vegetable soup, mature cheddar, brine, black olives, crisp celery, followed by the solid billowing aroma of the door being opened into a musty old library with uncared-for books strewn about and mouldering away. I say it was strong, but the nose really struck me as being more akin to a well-honed stainless-steel chef’s knife — clear and glittering and sharp and thin, and very very precise.

The clear and fruity sweet was also quite noticeable when tasted, combining badly with much more mucky, mouldy, dunder-like notes: think of a person with overnight dragon’s breath blowing Wrigley’s Spearmint gum into your face on a hot day. It was oily, sweaty, earthy, loamy and near-rank, but damnit, those fruits pushed through somehow, and combined with vanilla and winey tastes, breakfast spices, caramel, some burnt sugar, prunes, green bananas and some very tart yellow mangoes, all of which culminated in a very long, very intense finish that was again, extremely fruity – ripe cherries, peaches, apricots, prunes, together with thyme, mint lemonade, and chocolate oranges. 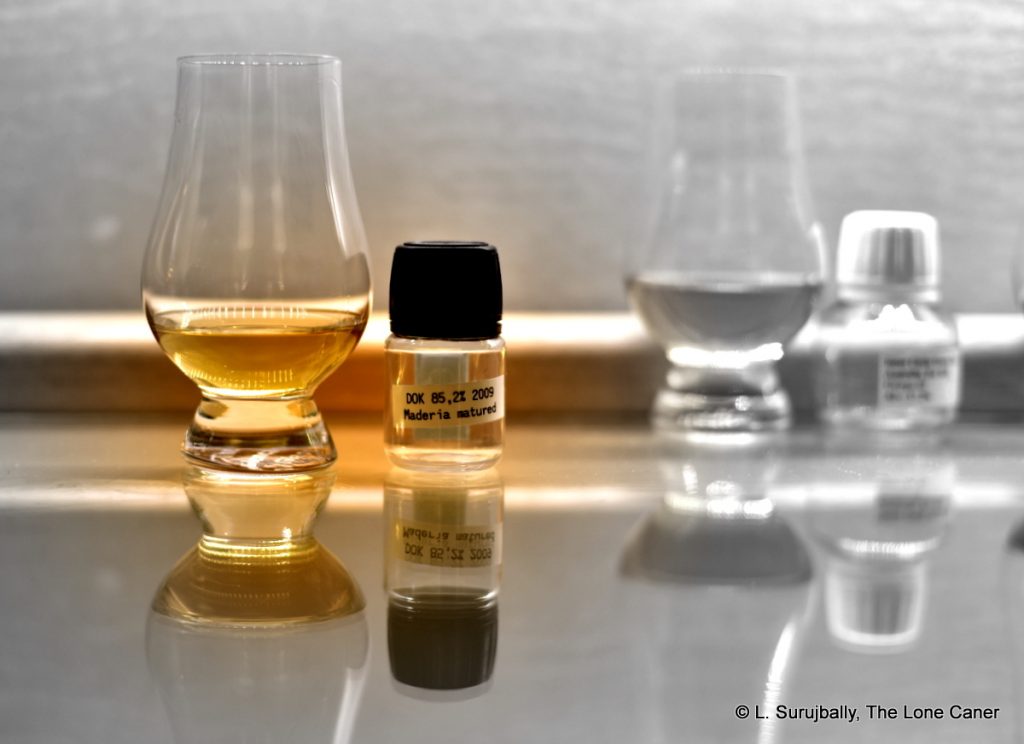 Whew! This was a hell of a rum and we sure got a lot, but did it all work? And also, the question a rum like this raises is this: does the near titanic strength, the massive ester count, the aged/unaged nature of it and the final concentrated finish, give us a rum that is worth the price tag?

Me, I’d say a qualified “Yes.” On the good side, the Wild Tiger thing stops just short of epic. It’s huge, displaying a near halitotic intensity, has a real variety of tastes on display, with the sulphur notes that marred the TECA or some other DOKs I’ve tried, being held back. On the other hand, there’s a lack of balance. The tastes and smells jostle and elbow each other around, madly, loudly, without coordination or logic, like screeching online responses to a Foursquare diss. There’s a lot going on, most not working well together. It’s way too hot and sharp, the Madeira finish I think is too short to round it off properly – so you won’t get much enjoyment from it except by mixing it with something else – because by itself it’s just a headache-inducing explosive discharge of pointless violence.

Then there’s the price, about €225. Even with the outturn limited to 170 bottles, I would hesitate to buy, because there are rums out there selling at a lesser cost and more quaffable strength, with greater pedigree behind them. Such rums are also completely barrel-aged (and tropically) instead of rested, and require no finishes to be emblematic of their country.

But I know there are those who would buy this rum for all the same reasons others might shudder and take a fearful step back. These are people who want the max of everything: the oldest, the rarest, the strongest, the highest, the bestest, the mostest, the baddest. Usefulness, elegance and quality are aspects that take a back seat to all the various “-estests” which a purchaser now has bragging rights to. I would say that this is certainly worth doing if your tastes bend that way (like mine do, for instance), but if your better half demands what the hell you were thinking of, buying a rum so young and so rough and so expensive, and starts crushing your…well, you know…then along with a sore throat and hurting head, you might also end up knowing what the true expression of the tiger on the label is.

These days I don’t usually comment on the price, but in this case there have been disgruntled mumbles online about the cost relative to the age, to say nothing of the packaging with that distinctive “10” suggesting it’s ten years old. Well, strictly speaking it is that old, but as noted before, just not aged that much and one can only wonder why on earth people bothered to arrest its development at all by having it in steel tanks, for such an unusually long time.

So on that basis, to blow more than €200 on a rum which has truly only been aged for three months (by accepted conventions of the term) seems crazy, and to set that price in the first place is extortionate.

But it’s not, not really.

At that ABV, you could cut it by half, make 340 bottles of 42% juice, and sell it for €100 as a finished experimental, and people would buy it like they would the white Habitation Veliers, maybe, for exotic value and perhaps curiosity. Moreover, there are no reductions in costs for the expenses of advertising, marketing and packaging for a smaller bottle run (design, printing, ads, labels, boxes, crates, etc) so the production cost per bottle is higher, and that has to be recouped somehow. And lastly, for a rum this strong and obscure, even if from Hampden, there is likely to be an extremely limited market of dedicated Jamaica lovers, and this rum is made for those few, not the general public…and those super geeks are usually high fliers with enough coin to actually afford to get one when they want one.

I’m not trying to justify the cost, of course, just suggest explanations for its level. Not many will buy this thing, not many can, and at end maybe only the deep-pocketed Jamaica lovers will. The rest of us, or the curious, will have to be content with samples.