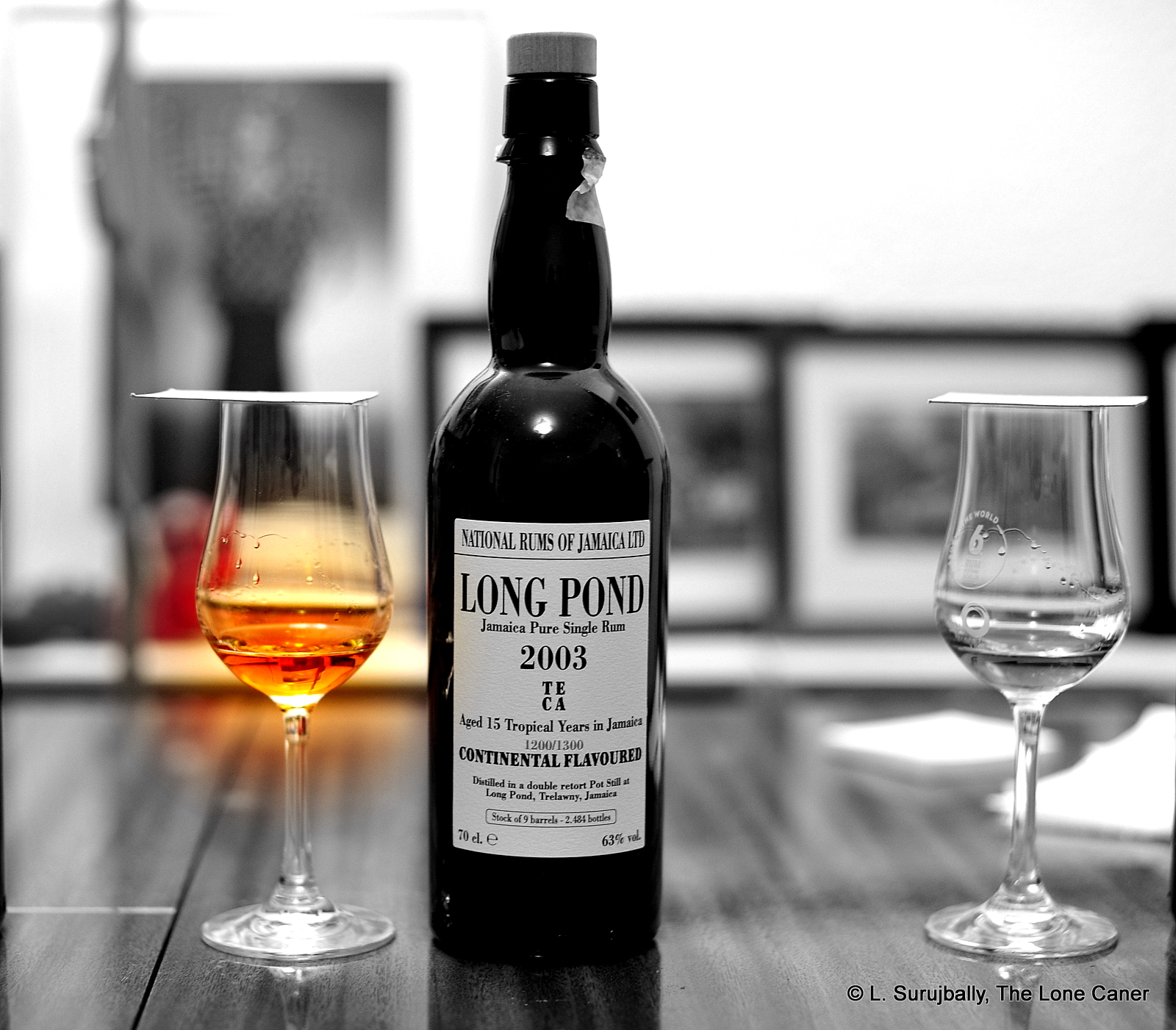 I start with these varied comments to emphasize that I am not alone in believing that the TECA is a rum you hold in your trembling hands when surveying the reeking battlefield of the zombie apocalypse.  I’m a fairly fit old fart of some mental fortitude, I’ve tasted rums from up and down the quality ladder…but the TECA still left me shell-shocked and shaking, and somewhere I could hear Luca sniggering happily and doing a fist pump. Partly or completely, this was because of the huge ester level the rum displayed -1200 gr/hlpaa (remember, 1600 is the maximum legal limit after which we enter “easily-weaponizable” territory), which the makers, staying within the traditional ester band names, refer to as “Continental Flavoured” but which I just call shattering. 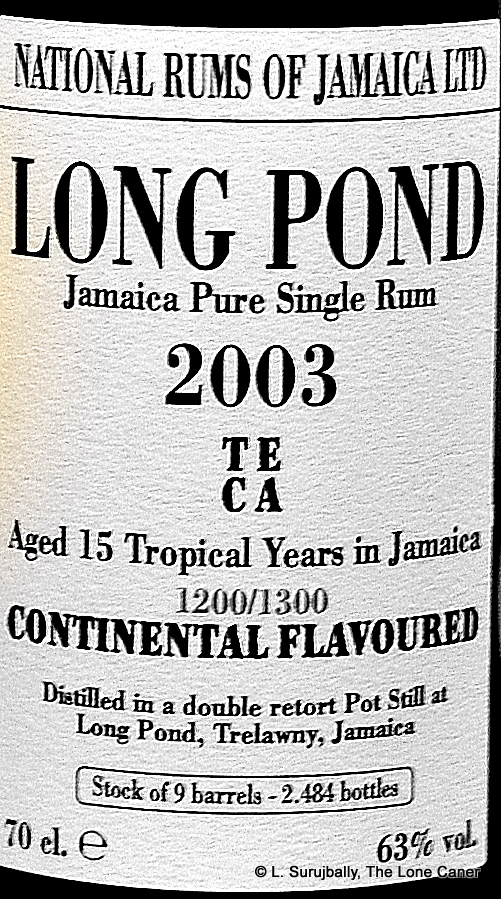 In sampling the initial nose of the third rum in the NRJ series, I am not kidding you when I say that I almost fell out of my chair in disbelief. The aroma was the single most rancid, hogo-laden ester bomb I’d ever experienced – I’ve tasted hundreds of rums in my time, but never anything remotely like this (except perhaps the Japanese Seven Seas rum, and I’d thought that one was a contaminated sample; now, I’m not so sure). All of the hinted-at off-the-wall aromas of the Cambridge were present here, except they were gleefully torqued up – a lot. It smelled like the aforementioned tannery gone amok or the hair salon dumping every chemical on the floor (at once) – it was a massive blurt of sulphur, methane, rubber and plastic dissolving in a bubbling pool of ammonia.  It smelled like hemp rope and decomposing wet jute bags, joined by something really rancid – rotting meat, microwaved fish, and three-day-old roadkill marinating on a hot day next to the asphalt machine. There was the scent of a strong soy-flavoured vegetable soup and spoiling chicken tikka, raw onions and sweat. The clear, fruity ester background was so intense it made the eyes water and the nose pucker, cold and clear and precise, giving rather less enjoyment than a furious bitch slap of sharp pineapples, gooseberries, ginnips, unripe mangoes, salmiak, green apples.  I know this sounds like a lot, but the rum’s nose went so far into uncharted territory that I really spent a long time on it, and this is what was there. And at the end, I really couldn’t say I enjoyed it – it was just too much, of everything. Hogo is what this kind of rotten meat flavour is called – or rancio or dunder or whatever — but for my money, it stands for “Ho God!!”

So that’s bad, right? Reading this, you’d think so.  But courage, Sir Knight, hoist up thy codpiece and taste it.  The very first expression in that section of my notes is a disbelieving “WTF?” … because it simply dumbfounded me – where did all the crazy-ass crap go?  It tasted of soda pop – coke, or fanta – persimmons and passion fruits and red currants, sharp and tasty. Salt, brine, bags of olives, plastic, rubber, vanilla, licorice all rubbed shoulders in a melange made pleasant just by comparing it to the trauma of what went before. The rancio and spoiling meat hogo retreated so fast it’s like they just vapourized themselves.  The flavours were powerful and intense, yes – at 62.5% ABV they could hardly be anything else – and you got much of the same fruitiness that lurked behind the funk of the smells, mangoes, tart gooseberries, red currants, unsweetened yoghurt and sour cream. But the real take away was that the nose and palate diverged so much. Aside from the sharp fruits and receding vegetable soup, there was also pistachio nuts, a sort of woodsy cologne, and even some over-sugared soda pop.  And when I hit the finish line, it exhaled with a long sigh redolent of more pistachios, vanilla, anise, soy, olives and a veritable orchard of rotting fruits and banana skins.

The Long Pond TECA rum from National Rums of Jamaica is a grinning ode to excess of every kind.  Given the profile I describe above (especially how it smelled) I think it took real courage for Luca to release it, and it once again demonstrates that he’s willing to forego initial sales to show us something we have not seen before, point us in a direction at odds with prevailing trends. It’s certainly unique – Luca remarked to me that it was probably the first time anyone had ever released such a high-ester well-aged Long Pond, and I agree. So far we’ve seen that the low-level-ester Vale Royal was a lovely, near-traditional Jamaican rum that edged gently away from more familiar island profiles, and the mid-level-ester Cambridge dared to step over the line and become something remarkably different, with strong tastes that almost redefined Jamaican and provided a taste profile that was breathtaking – if not entirely something I cared for.  But the TECA didn’t edge towards the line, it didn’t step over it – it was a rum that blasted way beyond and became something that knocked me straight into next week. This was and will remain one of the most original, pungently unbelievable, divisive rums I’ve tried in my entire writing career, because, quite frankly, I believe it’s a rum which few outside the deep-dive rum-junkies of the Jamaican style will ever like. And love? Well, who knows. It may yet grow on me.

It’s unclear whether the TECA stands for Tilston Estate, one of the estates that got subsumed into Long Pond in the wave of consolidations in the 1940s and 1950s (this is the theory to which Luca subscribes), or for Trelawny Estates, the umbrella company created in the 1950s before being taken over by the Government and renamed National Rums of Jamaica.  This is where some additional research is needed – nobody has written (so far) on the meaning of the “CA”, though given the Long Pond marks listed above, it’s reasonable to suppose it’s Tilston/Trelawny Estate, Continental Type A (as opposed to “B” or “C” with progressively higher ester levels. The various histories of Long Pond written by Barrel Aged Thoughts, the Cocktail Wonk and DuRhum provide useful background reading, though they do not settle the mark designation issue conclusively one way or the other.