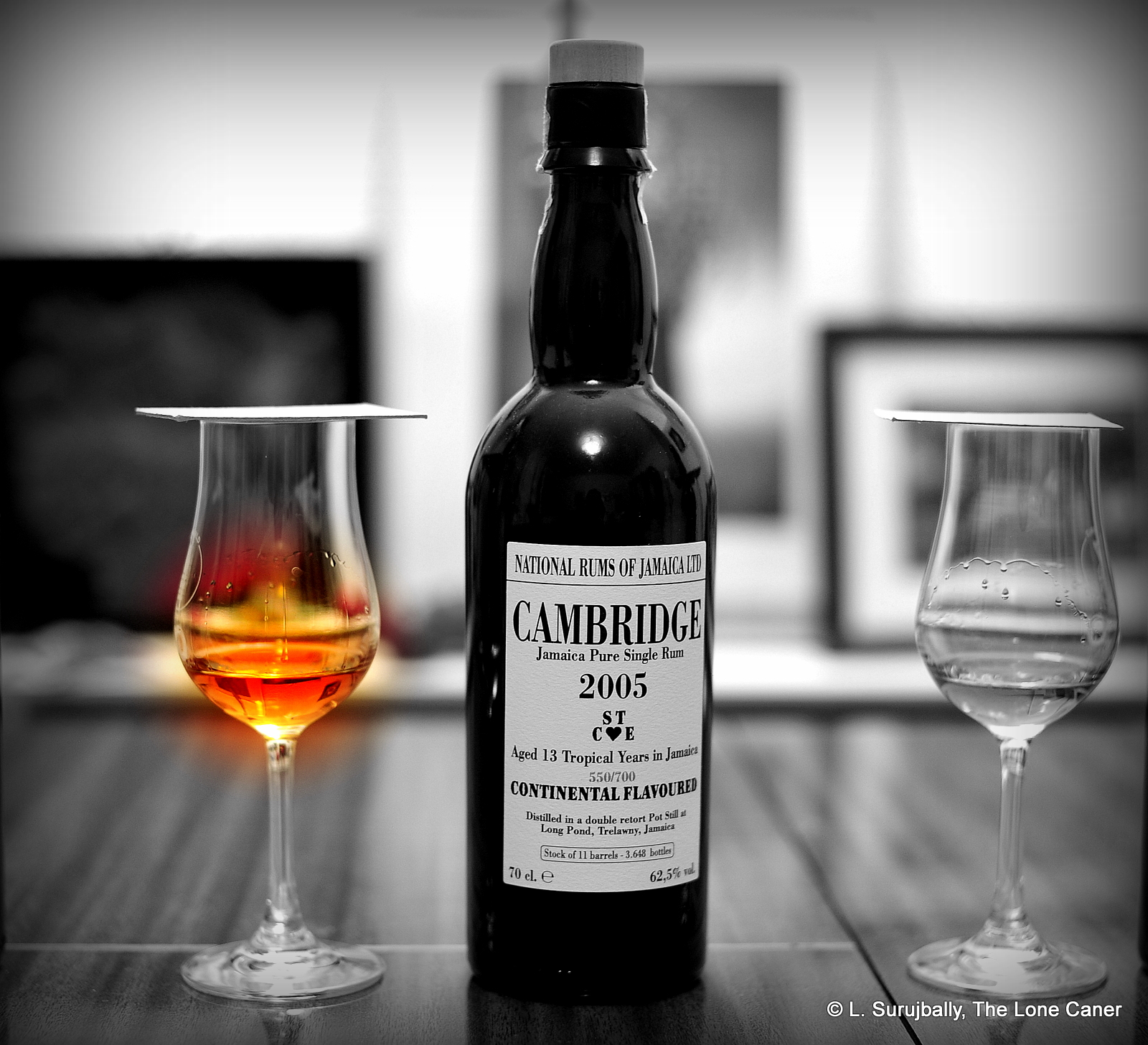 For those who are deep into rumlore, trying the quartet of the National Rums of Jamaica series issued by Velier in 2018 is an exercise I would recommend doing with all four at once, because each informs the other and each has an ester count that must be taken into consideration when figuring out what one wants out of them, and what one gets – and those are not always the same things.  If on the other hand you’re new to the field, prefer rums as quiescent as a feather pillow, something that could give the silkiness of a baby’s cheek a raging inferiority complex, and are merely buying the Cambridge 2005 13YO because it is made by Velier and you wanted to jump on the train and see what the fuss is about (or because of a misguided FOMO), my suggestion is to stay on the platform and look into the carriage carefully before buying a ticket.

This might sound like paradoxical advice coming from an avowed rum geek, but just follow me through the tasting of this 62.5% bronto, which sported a charmingly erect codpiece of 550 grams of esters (out of a max of 700 grams per hectoliter of alcohol (hlpa) — this moves it way out from the “Common Clean,” “Plummer” and “Wedderburn” categories, and somewhere in between the “Wedderburn” and “Continental Flavoured” (see other notes below), although it is formally listed as being a CF.  For comparison, the most furiously esterified rum ever made, the DOK (which is not supposed to be a drinking rum, by the way, but a flavouring ingredient for lesser rums and the Caputo 1973) runs at just about the legal limit of 1600 /hlpa, and most rums with a count worth mentioning pretty much stick in the few hundreds range. 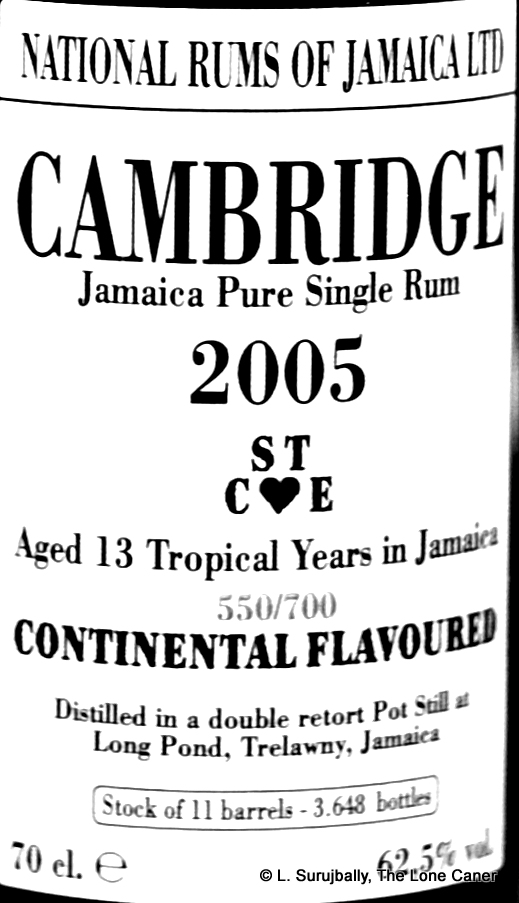 There’s a reason for that. What these esters do is provide a varied and intense and enormously boosted flavour profile, not all of which can be considered palatable at all times, though the fruitiness and light flowers are common to all of them and account for much of the popularity of such rums which masochistically reach for higher numbers, perhaps just to say “I got more than you, buddy”. Maybe, but some caution should be exercised too, because high levels of esters do not in and of themselves make for really good rums every single time.  Still, with Luca having his nose in the series, one can’t help but hope for something amazingly new and perhaps even spectacular. I sure wanted that myself.

And got it, right from the initial nosing of this kinetic rum, which seemed to be straining at the leash the entire time I tried it, ready to blast me in the face with one of the most unique profiles I’ve ever tried.  Christ!…It started off with tons of dry jute sacks, dusty cardboard and hay – and then went off on a tangent so extreme that I swear it could make a triangle feel it had more than a hundred and eighty degrees. It opened a huge can of sensory whup-ass with the full undiluted rumstink of an unventilated tannery going full tilt (yes, I’ve been in one), the sort of stark pungency one finds in a hairdressing salon using way too much nail polish remover, and a serious excess of ammonia and hair relaxant…all at the same time. I mean, wow! It’s got originality, I’ll give it that (and the points to go with it) but here is one place where the funk is really a bit much.  And yet, and yet….alongside these amazingly powerful fragrances came crisp, clearly-defined fruits,mostly of the sharper variety – pineapple, gooseberries, five-finger, soursop, unripe mangoes, green grapes, red currants, olives, brine, pimentos…I could go on.

What makes the rum so astounding – and it is, you know, for all its off-the-wall wild madness – is the way it keeps developing.  In many rums what you get to smell is pretty much, with some minor variation, what you get to taste. Not here. Not even close. Oh the palate is forceful, it’s sharp, it’s as chiselled as a bodybuilder’s abs, and initially it began like the nose did, with glue, ammonia and sweet-clear acetone-perfume bolted on to a hot and full bodied rum.  But over time it became softer, slightly creamy, a bit yeasty, minty, and also oddly light, even sweet. Then came the parade of vanilla, peaches, ginger, cardamom, olives, brine, pimentos, salty caramel ice cream, freshly baked sourdough bread and a very sharp cheddar, and still it wasn’t done – it closed off in a long, dry finish laden with attar of roses, a cornucopia of sharp and unripe fleshy fruits (apricots, peaches, apples), rotting bananas, acetones, nail polish and lots and lots of flowers.

I honestly don’t know what to make of a rum this different.  It provides everything I’ve ever wanted as an answer to tame rum makers who regularly regurgitate unadventurous rums that differ only in minute ways from previous iterations and famed older blends.  This one in contrast is startlingly original, seemingly cut from new cloth — it’s massive, it’s feral, it makes no apologies for what it is and sports a simply ginormous range of flavours. It cannot be ignored just because it’s teetering on the wrong side of batsh*t crazy (which I contend it does).  Luca Gargano, if you strain your credulity to the limit, can conceivably make a boring rum…but he’s too skilled to make a bad one, and I think what he was gunning for here was a brown bomber that showcased the island, the distillery, the marque and the ester-laden profile.  He certainly succeeded at all of these things…though whether the rum is an unqualified success for the lay-drinker is a much harder question to answer.

You see, there’s a reason such high ester superrums don’t get made very often.  They simply overload the tasting circuits, and sometimes such a plethora of intense good things is simply too much.  I’m not saying that’s the case here because the balance and overall profile is quite good – just that the rum, for all its brilliantly choreographed taste gyrations, is not entirely to my taste, the ammonia-laden nose is overboard, and I think it’s likely to be a polarizing product – good for Jamaica-lovers, great for the geeks, not so much for Joe Harilall down the road. I asked for new and spectacular and I got both.  But a wonderful, amazing, must-have rum? The next Skeldon or 1970s PM, or 1980s Caroni? Not entirely.

Like the Vale Royal estate and Long Pond itself, Cambridge was also located in Trelawny Parish and has a history covered in greater depth by BAT, here, so I’ll just provide the highlights in the interests of keeping things manageable. Founded in the late 18th century by a family named Barrett (there’s a record of still being in the hand of an Edward Barrett a generation later), it closed its doors just after the Second World War in 1947 by which time another family (or the name-changed original one) called Thompson owned the place. It’s unclear whether the mark STCE (Simon Thompson Cambridge Estate according to the estimable Luca Gargano) was maintained and used because physical stills had been brought over to Long Pond at that time, or whether the Cambridge style was being copied with existing stills.

Whatever the case back then, these days the stills are definitely at Long Pond and the Cambridge came off the a John Dore double retort pot still in 2005.  The label reflects a level of 550 g/hlpa esters which is being stated as a Continental Flavoured style, but as I’ve remarked before, the level falls in the gap between Wedderburn and CF.  I imagine they went with their own system here.