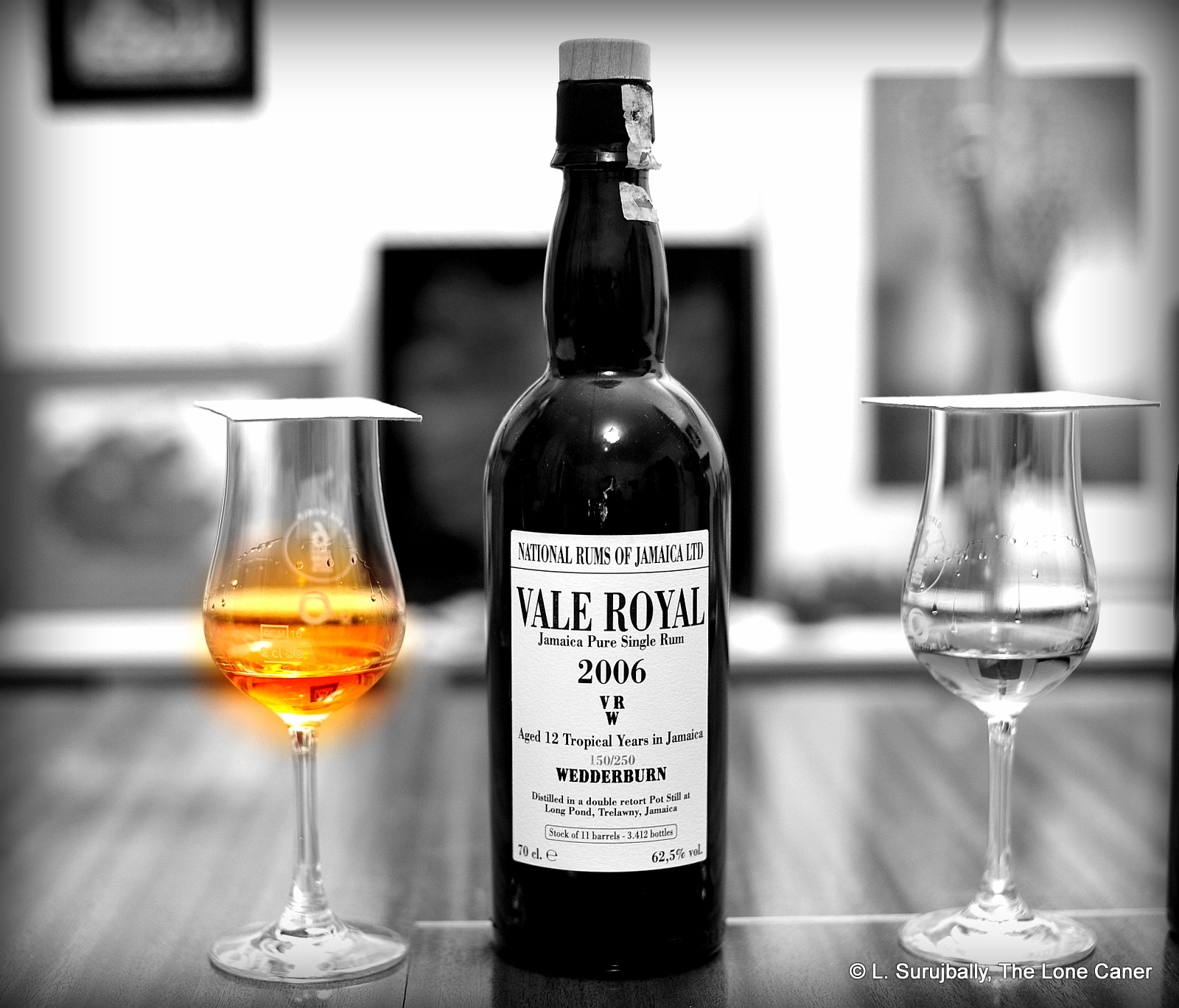 This whole week I’ll be looking at the quartet of stern, forbidding black and white bottles of the National Rums of Jamaica, which have excited a slowly rising conversation on social media as pictures get posted and more and more people try them.  Certainly, they’ve got all the Jamaican rum punditry in transports already (plus they are issued by Velier, which is clear from the minimalist label and box design). All four will be written about in a sequence, because there’s simply no way to speak to them individually at long intervals without missing the point, which is that they’re part of an integrated set, and to understand one means to try and understand all – each informs the other. Because there’s a fair bit of background involved in these rums, below each post will have a longer-than usual “Background notes” section detailing notes common to all, and defining some terms, below the review.

The Vale Royal is probably the most traditional rum of the NRJ series, and for the reasonably wide-tasting rum drinker, the best one to start with, as will become clear when we move through the four-rum series.  It also has the lowest ester-count among the set, which might give you an inkling of how they all progress (you’d think that….but no). Bottled at 62.5%, as they all are, it derives from a double retort pot still, is 12 years old, tropically aged (of course) and is made in the Wedderburn style, with an ester count of 150 grams per hectoliter of pure alcohol (g/hlpa) — out of a max of 250 for this classification — which is not the standard accepted one for Jamaicans as a whole, but Longpond’s own.  That makes it a very approachable rum, very tasty, yet paradoxically not entirely a rum I could immediately assign to Jamaica, the way one could, for example, a Worthy Park, an Appleton, or a Hampden — though admittedly we have more experience with those and therefore know them somewhat better (this is a personal opinion, though). 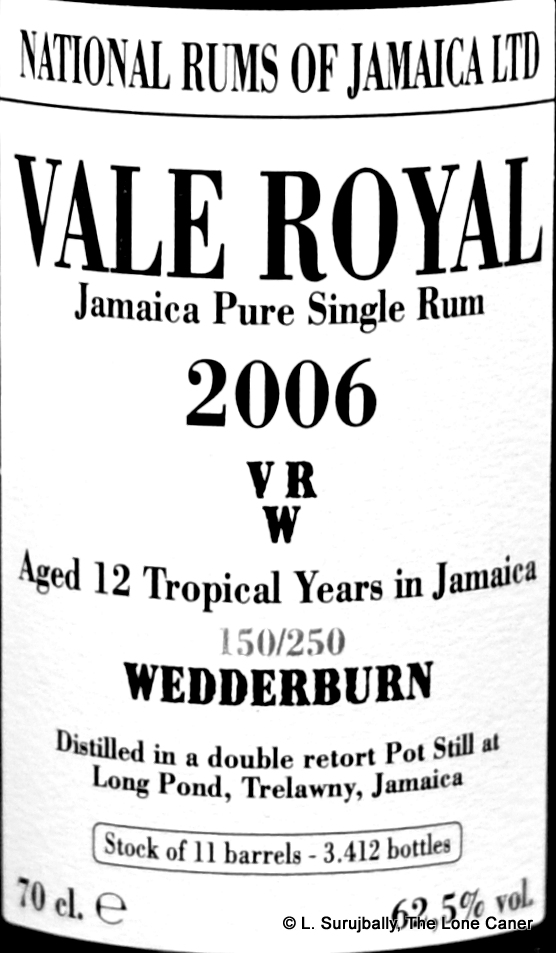 Consider first the nose.  Frankly, I thought it was lovely – not just because it was different (it certainly was), but because it combined the familiar and the strange in intriguing new ways. It started off dusty, musky, loamy, earthy…the sort of damp potting soil in which my wife exercises her green thumb.  There was also a bit of vaguely herbal funk going on in the background, dry, like a hemp rope, or an old jute sack that once held rice paddy. But all this was background because on top of all that was the fruitiness, the flowery notes which gave the rum its character – cherries, peaches, pineapples, mixed with salt caramel, vanilla, almonds, hazelnuts and flambeed bananas. I mean, that was a really nice series of aromas.

On the palate the strength showed its fangs and let’s face it, at 62.5% it’s got monster power hidden under the hood, and a little patience was required.  It was sharp, sweet, flowery and estery to a fault, and somehow that dry earthy note disappeared almost entirely, probably edged out by the sheer force of all the other flavours that took over – this is perhaps one of those rums where a little water is really required.  I didn’t get much without the addition, but with a few drops there was a cloudburst of flowery flavours and sharp fruits: pears, apples, cider, green grapes, raisins, unripe mangoes, tart yoghurt and sour cream, nuts, vanilla, anise and even some yeasty bread just to shake things up.  And the finish, well, that was excellent – long, flavourful, fruity, sweetly flower-like, and took forever to die down, coughing up a last note of bitter chocolate, crushed hazelnuts, vanilla and sharp unripe fruits just to show that even on the back end it meant business and had a bit ore to smack you down with..

For my money, this is a pretty great rum. It is well aged, well balanced, and has the funky note and that fruity estery profile – neither to excess – that drives lovers of Worthy Park and Hampden into orgasmic throes of onanistic ecstasy.  It also has originality and character in that it isn’t afraid to add a few extra things into the mix that might seem startling at first – these are new and original and yet not overdone. In fine, it has almost everything I want from a rum that purports to break the mould and show us something different – old tastes combined with new and intriguing flavours that somehow don’t call that much attention to themselves, all put together into something peculiarly its own.  What it presented was an interesting melange of both Jamaican and something else, with a sly wink and an arrow pointing at the other, more ester-boosted rums in the series…for both good and ill. And that will become clearer as we progress through the line.

Exactly who came up with the naming nomenclature, or what those names mean, is something of a historian’s dilemma, and what they call the juice between 301 to 699 gr/hlpa is not noted, but if anyone knows more, drop me a line and I’ll add the info.  Note in particular that these counts reflect the esters after distillation but before ageing, so a chemical test might find a differing value if checked after many years’ rest in a barrel

Vale Royal was a distillery located in Trelawny Parish, just like Longpond, and has a history covered in great depth by BAT, here. The long and the short of it is that it was founded in 1776 under the name of “Walky Walk” (poetic,yes?) before being retitled Vale Royal in the early 1800s. The estate managed to survive after the abolition of slavery, but a combination of falling sugar prices and a movement of consolidation led to the sale of the estate to Longpond in 1959, with the marque of VRW remaining as a memento of its glory days when it stood for “Vale Royal Wedderburn” – though as noted above, this edition, produced at Longpond’s facilities, should rightly be called a Plummer under Standard Notation, since it has 150 g/hlpa, not the required 200-300, but evidently decided to go with its own system.