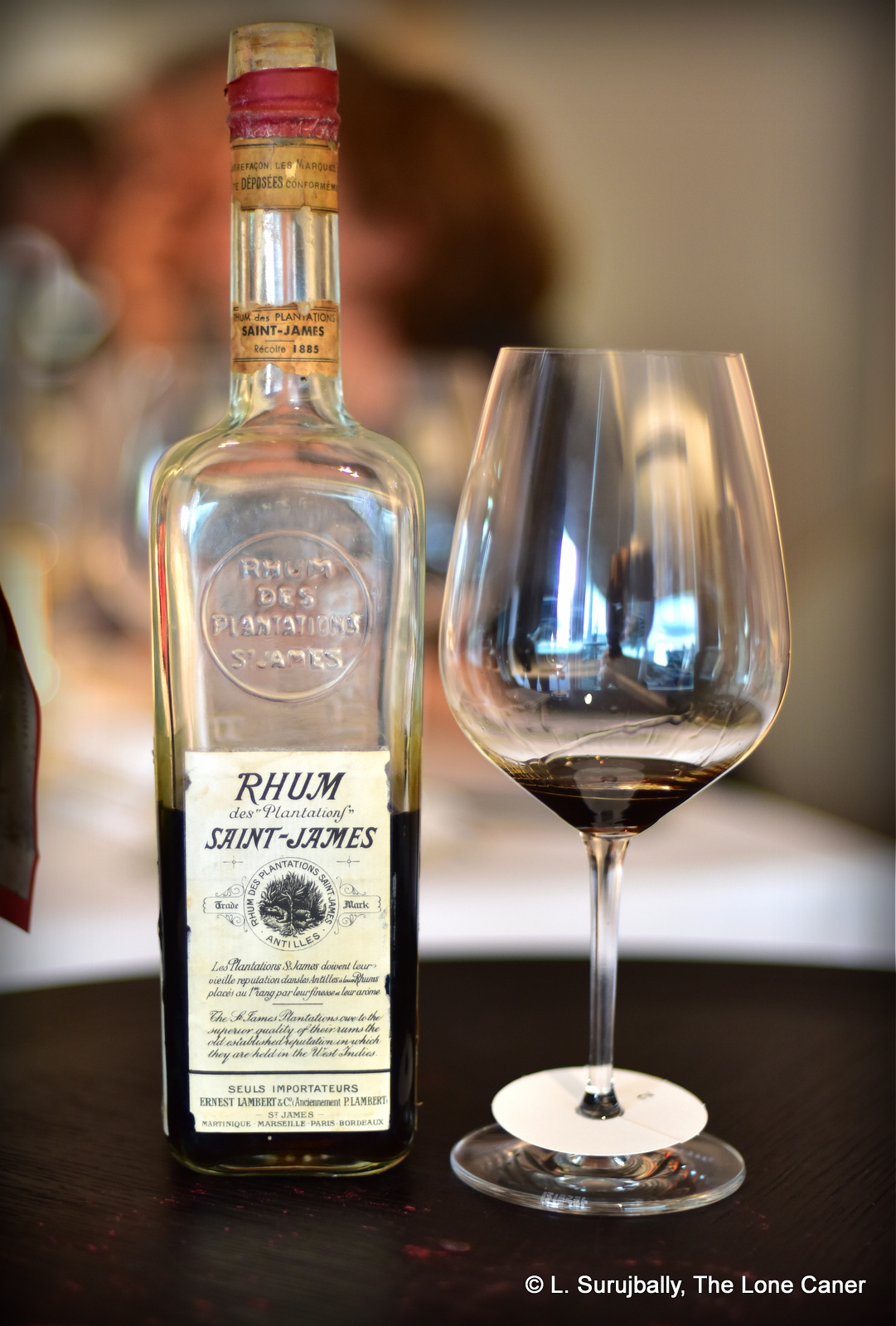 By now just about anyone in touch with the rum blogosphere on social media is aware of the add-on to the Hampden Rums launch hosted by La Maison-Velier in September 2018: the “Rum Tasting of the Century” — though I believe the words “…so far” were were silently tacked on by some of us participants, hoping against hope for another (better, older) one before we get laid to rest like Nelson in a cask of DOK. Nor are many unaware of the four aged unicorn rums we were privileged to try as part of the Tasting – Skeldon 1978, Bally 1924, Harewood House 1780, and the subject of this revisit, the Rhum des Plantations St. James 1885.

I’d had the luck and good fortune to sample the St. James before and have written about it as part of the Rumaniacs. This of course cut me absolutely zero slack with the attending Collective – because for all our camaraderie and friendship (online and off), we’re a cheerfully competitive bunch of people, and like to get our personal opinions settled (no others being as good as our own, naturally) before even acknowledging that someone else may have tried a particular rum in front of us.

Still, we had to get facts, and a lot of our preliminary conversations and subsequent texts and messages revolved around the data points, which are as follows: the rhum was made in 1885 on Martinique, and derived from cane juice that was boiled prior to fermentation. Although the exact age is unknown, it was certainly shipped off the island before Mount Pelée erupted in 1902 and destroyed all stocks there, so at an absolute maximum it can be 17 years old. This is, however unlikely – few rums or rhums were aged that long back then, and the opinion of the master blender of St James (Mark Sassier) that it was 8-10 years old is probably the best one (Cyril of DuRhum has some additional details in his 2016 review) . Following the eruption of the volcano, the only remaining bottles were in Europe and gradually unsold ones were acquired (many from the cellars of Bardinet) and sent back to Martinique and put on sale. Luca, who was a brand ambassador for St. James at one time, eventually acquired (or so legend goes) about 300 bottles in the 1980s. One of them, 47% ABV as tested in 1991, stood before us in a conference room in the Four Seasons in London overlooking theThames, awaiting our attention.

The first thing everyone remarked on about this rhum was the colour – a dark dark dark mud brown. The second thing was the aroma. Without doubt this remained one of the richest rum smells of my own experience: it was redolent of coffee, licorice, coca-cola, bitter chocolate, coconut shavings accompanied by enormous notes of molasses. There were, after some additional minutes, some light fruits and florals and lemon peel, but overall, it reminded one of nothing so much as a Demerara rum, not an agricole, and a really heavy, thick Demerara at that. 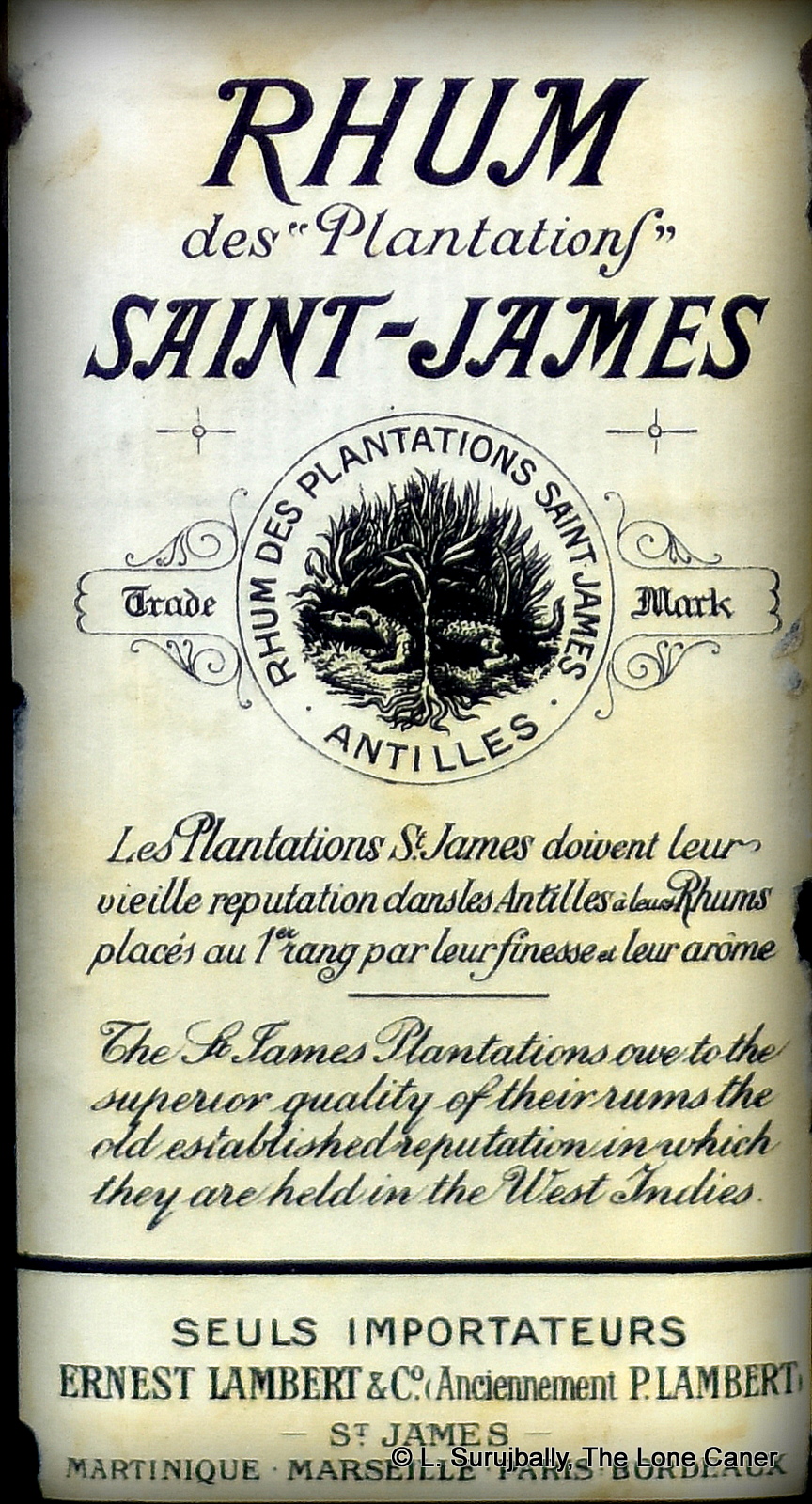 Though my tasting memories of the first 1885 rum I had tried three years earlier had faded somewhat, I still remembered much of the core profile, and these were back for an encore, with the same dull richness that made it so memorable back then. Bitter chocolate, nougat, nuts, grated coconut and coffee led off the charge, with flanking movements of licorice, caramel, coke and the noticeable leather and oak tannins that spoke to some ageing. Fruits again – pears, orange zest, plums, blackberries. The texture on the tongue was heavy, stopping just short of cloying, and I must remark on the fact that it was overtaken a little too much by the forceful molasses tastes. Still, it was a great sip, and the rum glided smoothly to the finish with last notes of earthy mustiness, roasted chestnuts, molasses (of course), fast-fading fruitiness, dates and chocolate.

What a difference a mere three years makes. In 2015 my sample of the Saint James 1885 got rated 90, and I commented favourably on its depth and complexity. Certainly, compared to the rhums against which it was being tried that day (Barbancourt 25 YO and 15 YO, La Martiniquaise Rhum Pur, La Favorite 1990, and J. Bally 6 YO) and my own experience with uber-old spirits to that point, it was a score I have no problems defending. However, since then I’ve tasted and gone into depth with and written about another 300+ rums, and quite aside from wry commentaries about not having a life, it’s clear that both increased experience and different comparators do make a difference in assessing the same rum years later.

On that basis, I’m going to rank it a few points lower this time, but in truth, the score is meaningless for a rhum this rare and that expensive and from so far back. I think that for anyone who has opportunity to try a rum made over a hundred years ago, it’s enough to simply say that they drank it. It’s a window into perceiving French island’s rhum before agricoles became agricoles, before the AOC, before the production methodologies of today. It promotes understanding of how rum has developed and changed over the decades and centuries, and if one is left with a single thought after the fact, it’s that it was and remains an experience to rival few others in our long journey of rum appreciation. That alone might be worth all the points anyone could ever give it.