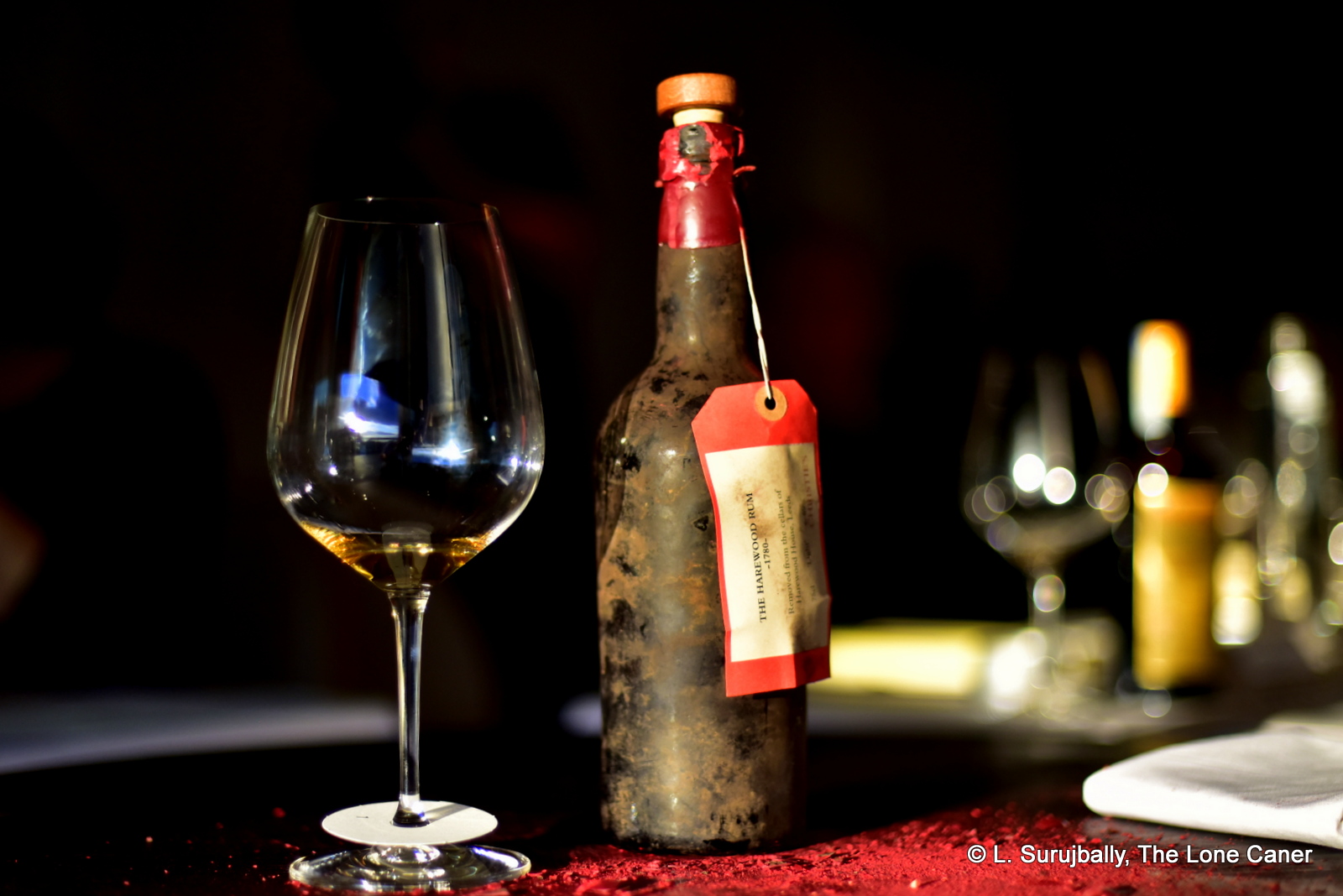 Given the social media blast which attended that day, many of the facts about the Harewood (bow head, doff cap, genuflect) are now reasonably well known, but since I’ve been following the story since the story broke in 2013, I’ll recap them briefly here. The Harewood estate in Yorkshire was built on the fortune of one Henry Lascelles who arrived in Barbados in 1711, and who within twenty years had built a small empire founded on sugar and banking.  In 2011, his descendant Mark Lascelles found 28 cobweb- and filth-encrusted bottles in the cellar of Harewood House and after ascertaining that they were rums, auctioned them off in two lots. The entire (first) collection of twelve handblown bottles sold for £80,000 at Christie’s in 2014, though the buyers were not disclosed by the Daily Mail which reported on the matter. Sleuthing around informs me that Hedonism Wines of London bought one and then resold it for $17,350 to Wealth Solutions who put a capsule into each edition of their collection of 100 Rum Watches within the “Spirits Watches” collection, and the rum has been dubbed the most expensive in the world. Obviously either LMDW or Velier (or both) bought another (or several) and maybe the Whisky Exchange took a third, hence their listing.  But who cares? This is beyond history, beyond heritage. This is the rum from further back in time then any of us proles were ever likely to try.

And just look at the Bad Boys of Rum who were called in to help taste it: John Gibbons, Gregers Nielsen, Wes of The Fat Rum Pirate, Steve James of the Rum Diaries Blog, Matt Pietrek the Cocktail Wonk, Pete Holland from the Floating Rum Shack and Tatu Kaarlas of Refined Vices were all there trying this thing at the same time I was — and let me tell you, it was a  kinetic experience to hang out with some of the best known writing personages of the rumiverse, and be able to cheerfully talk and sample and poke fun at each other all at the same time. 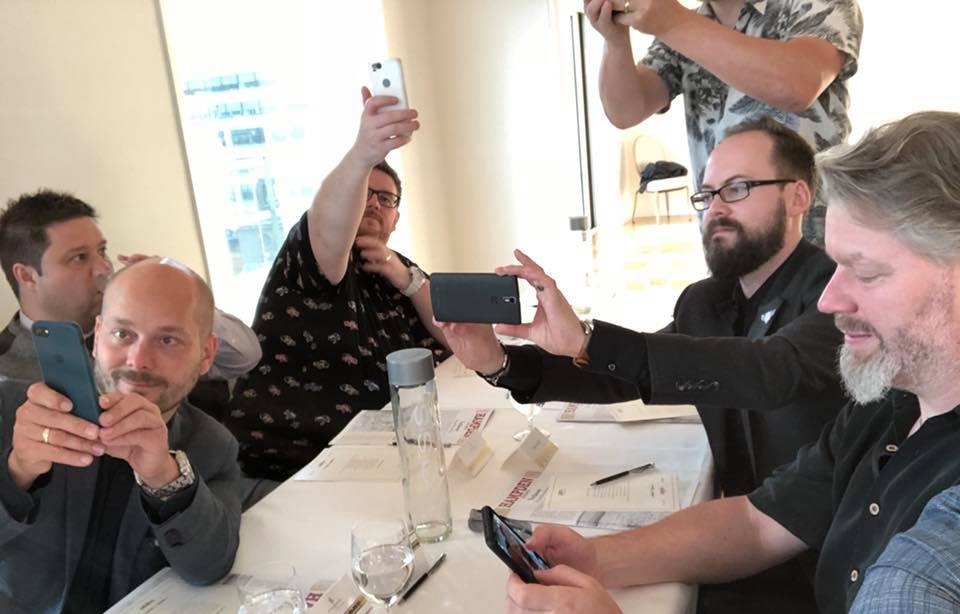 The very first — almost disbelieving — notes I wrote down in my book were “How can a rum from that far back smell so modern?”  The aroma was like a top end cask strength rum issued today – decant into a new bottle, slap a fancy label and some words on it, and it could be something you see on a shelf in your local spirits emporium boasting a chubby price tag. It started off musty and dusty, something like the Samaroli 1948 West Indian rum.  It smelled of glue, sawdust, cedar wood, crushed walnuts, grapes and orange marmalade, all of which came together in an extraordinary balance. It developed into rotting apples, sour cream, gherkins in vinegar, before doing a switcheroo and becoming dry and phenolic. It had briny notes, minty notes, licorice notes, hints of molasses, olives, wood chips, aromatic tobacco, light fruits, clean herbs (almot agricole-like)….and this was all in the first ten minutes. The 69% strength at which it was bottled gave everything, and held back nothing, and I had a sneaking suspicion that if I were to strap it onto my bathtub and add wheels, I could set lap records at the Nurburgring.

And that was just the nose.  Tasting it elevated my opinion even more.  The strength was totally bearable and not sharp or vinegary or nasty in the slightest – oh sure it was fierce and strong and hot and dry, but it was a full proof rum and this was par for the course – what was remarkable was its overall sippability (is that a real word?). Initial flavours were of light sugar water, apples and watermelon juice (that agricole touch again), acetones, more tobacco, nail polish, grapes, licorice, light molasses, fried bananas and dark chocolate.  It also had a texture and taste of unsweetened fresh yoghurt drizzled with olive oil, the musky taste of hummus and pea soup and dark yeasty bread, which gradually retreated into a sort of subtle fruitiness, of orange marmalade, pears and the crispness of unripe yellow mangoes. It was the sort of rum that simply got better as it rested and opened up in the glass, and while I was trying hard not to pay attention to the soft conversation and chirps of delight from my compadres left, right and opposite, I don’t think my appreciation was limited to myself alone.  Even the finish was not a let down, and provided a proper ending to the rum – long, aromatic, redolent of light anise and furniture polish, dust, hay and some oak, bitter chocolate, nuts and a last hint of fruitiness too laid back to identify precisely.

In summary…wow!  Honestly, if it was commercially available, it should come loaded with a book of quotations that had nothing but expletives, together with a thesaurus listing all the equivalents to the word “awesome”, just in case one’s vocabulary isn’t up to the task.  Would I recognize it blind? Is it representative of Barbados at all? I don’t know – probably not. What I think is that it’s a rum trembling right on the edge of being off the scale.

But we couldn’t try it blind – and much as I tried to not let the heritage and age of this rum sway my mind and my scoring, the fact of the matter was that the panoply of tastes and the complexity of the whole experience could not be denied.  We who sat down that day and tried this rum were privileged beyond all measure to have a window opened up into the way rums tasted back then, how they were different from now…yet also curiously the same. For all the changes that have occurred in the industry and the technology between 1780 and 2018, the truth is that the current inheritors of the tradition of quality rum-making aren’t that far away from what was once being made. And that is all to the credit of both those who came before, and those who make rums now.