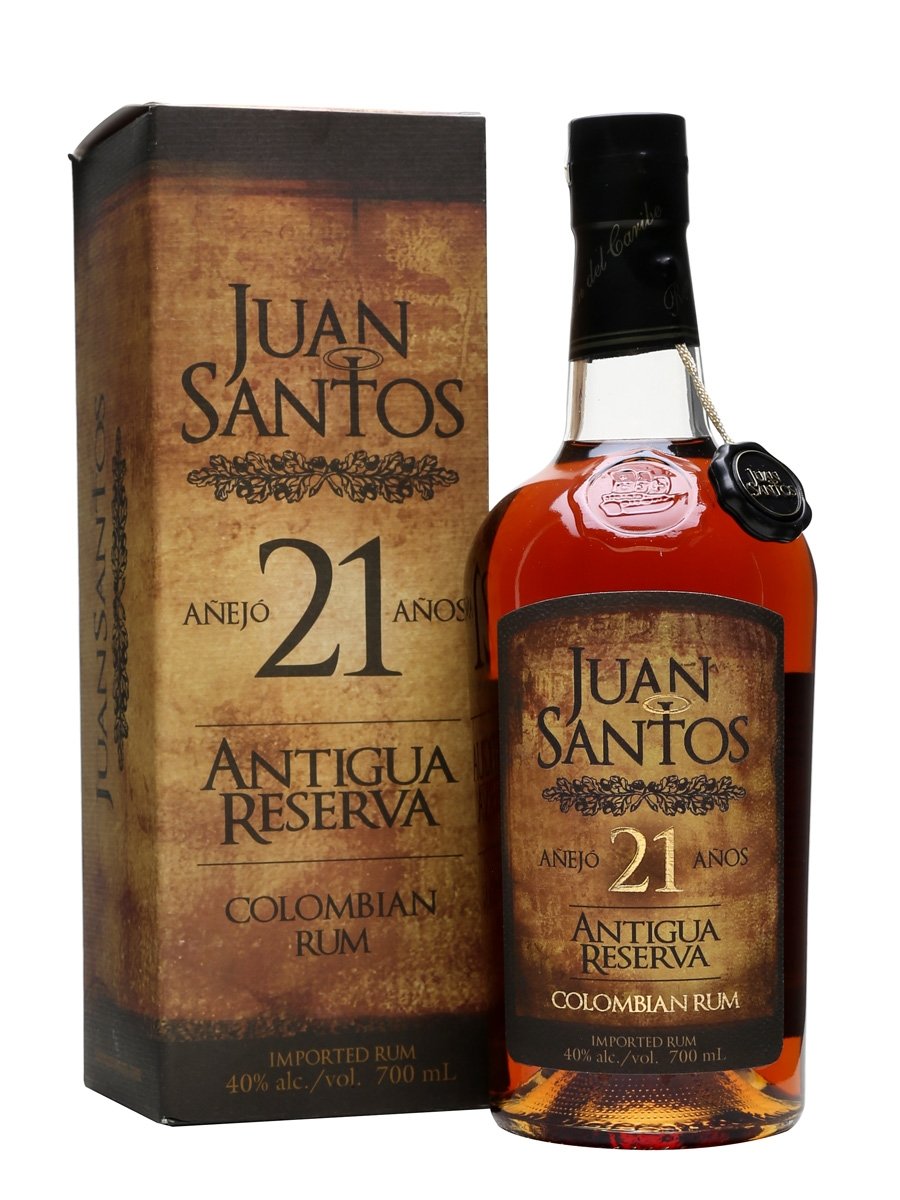 A steal at the price, the 21 holds its own against rums costing twice as much, and might be better known and sell more if the tag was higher. I think of it like I do a Nissan GT-R – too cheap to be taken seriously as a supercar, but a performer that can give any of the top dogs a run for their money. If you see it and you have the cash to spare, my recommendation is to get it.

The Juan Santos 21 year old is the epitome of the Casa Santana group’s rum line. It is a poem in a bottle, a liquid symphony of brown and gold, of smell and taste, and quite possibly one of the best aged rums available for under a hundred bucks. Anywhere.

It is made in Colombia, an unappreciated nation in South America better known for narcotics and coffee, violence and political upheaval. Yet they speak the purest Spanish in the world outside of Iberia. Democratic traditions survive in spite of FARC and narco barons that would derail many another state. Colombia is the world’s largest supplier of emeralds, possesses a dynamic and educated workforce (I know – I worked with four of them and was hugely impressed by each), and, like every country under the sun, claims its beaches are whiter and its women more beautiful than anyplace else on earth. Now they can add another cachet to their national pride – this rum. The Santana company has been making rums in the Cuban style since 1994 – I’ve heard that it was Cubans who started the enterprise, see below – and yet have made only limited inroads in the Canadian market. Bacardi, Lamb’s and Screech, together with Cruzan and a few other one-rum-here-one-rum-there variations still dominate liquor shelves here, in spite of both the Arctic Wolf and myself suggesting the product is good value for money.

The 21 is all wrapped up in a look that does a neat jiu-jitsu on the Pyrat Cask 1623 rum, which had a phenomenal aesthetic appeal and little else. Perhaps the trick is not to let the 21’s presentation put one off – it’s not lackluster, precisely…more like undistinguished. The label is cluttered and busy with a pattern of muted colours (contrast that against the vivid backdrops of the Appletons, or the simplicity of the Mount Gay labels), and the bottle is, umm, just a bottle. One might be forgiven for missing the “21” in the title altogether, and tripping over it in some surprise. Huh? Veinte-uno? Que es esto?

The rum itself is a light brownish gold. It poured nicely into the glass and swirling gently showed thinner legs than I would have expected – it evidently lacked the heaviness, the oiliness which would have indicated a deeper flavor profile and a longer fade. Still, the nose was nothing to sneeze at: it was all soft and silk, no sting and no burn, and held promising notes of toffee, brown sugar, a very delicate hint of flowers…and a bit of coffee. Given that Juan Santos also makes a very pleasant underproof café, I found this to be no more than appropriate.

The taste was by any standards nothing short of excellent. Juan Santos 21 arrived unheralded, with no blaring tantara of orange trumpets such as you’d find in the rather obnoxious Pyrat’s XO or 1623. It slunk onto my palate, and stayed there. What I got was a smooth and soft liquid gold that some master blender may well have put his cojones into hock to the Almighty to produce. There was hardly any bite or burn at all – pretty good for a rum at 40% – with a remarkable depth of flavor for which the initial pour I noted above had done nothing to prepare me. I was expecting something a tad on the thin side, maybe some citrus hints, a clear sort of taste in line with the lighter colour and clean nose – what I got was a rye-and-rum combo that was deeper, darker and more flavourful than it had any right to be. Caramel, burnt sugar, yes, of course – but also breakfast spices, some cinnamon, that coffee again (maybe Juan Valdez is a relative?) and nutmeg lending some gentle muskiness it all. I was, to put it mildly, impressed – twenty one years in oak had been mellowed and balanced out and blended so well that it was a smooth balm to the taste buds.

And the finish was no slouch either: thin legs or no, there was enough oil left in the rum to make a lasting impression that did not bail in a hurry with a harsh knock to the tonsils, merely stayed and lingered, like an old friend whose goodbyes can take a few minutes longer than the average, simply because there’s always one last thing to say. The 21 was so smooth and so languorous, that it actually seemed to stay a lot longer than it did. There were no harsh afterburns or tastes or anything, and quite frankly, if my personal preference hadn’t been for darker rums of greater body, I’d rate this one even higher than I do – for those that like a good quality sipping rum that’s right up there, look no further, since this single ~$85 rum will give you just about everything you’re after.

In discussing the Juan Santos with the store manager at Co-op where I bought it, he remarked that for him this absolutely eclipsed the Zaya which had been his go-to tipple of choice up to that point. I don’t quite agree it should eclipse anything, since I have a pretty good collection of rums I like as much or more than the 21, and each has their place in my life, depending on the crabbiness of my mood (I drink harsh rotgut rums with minimal cola when I’m angry) whether I want to mix it and get a pleasant buzz on (medium-tier five year olds are good for this), get loaded fast (pick any 151, alert the wife and move out) or simply watch the sun go down (any top end sipping rum of your choice). That said, there’s no question in my mind that the Juan Santos 21 year old, for its price, offers a value for money that other top guns costing twice as much (and with only incrementally greater quality) would do well to observe. Price is no guarantor of quality, I wrote for my negative Pyrat 1623 review, meaning that a high price sometimes nets you a dog. Here, with this rum, Juan Santos proves that the reverse is also true, and that a reasonably low cost for an aged rum is no indicator of a lack of any kind.

Juan Santos rums are produced by Santana Liquors out of Baranquilla, a free trade seaport zone in the north of Colombia, on the Caribbean Sea. The company also makes various brands for other markets, like the somewhat better-known La Hechicera and Ron Santero labels (Ron Santero is the US brand name for Juan Santos, the latter of which is only sold in Canada). Their website and Forbes notes that they started operations in 1994 when their founders – assumed to be the Riascos business family – brought over some rum makers from Cuba, and an article in el Tiempo notes they are the only family owned (private) rum company in Colombia — all others are apparently part of the Colombian government monopoly.

However, it does not appear that they are actually in the business of distilling themselves, not are they primary producers of anything. They have no sugar cane fields, nor a refinery nor a distillery – at least not that they promote on their own materials and company websites – unless it is the winery they also own and operate, which is where their barrels of rum are aged. What they do, appears to be to act as third party blenders, much as Banks DIH does in Guyana. La Hechicera, their companion brand now distributed by Pernod Ricard who bought a stake in 2021, is often spoken about in rum circles as sourcing barrels and stocks of rum from around South America and then blending and bottling them in Colombia as “Colombian” rums. But they certainly don’t make anything of their own on a distillery.

As an additional note, Juan Santos rums no longer appear to be available in primary markets and online web shops – it has been almost a decade since I sourced mine, so sometime in the mid-2010s I suspect it may have been discontinued.