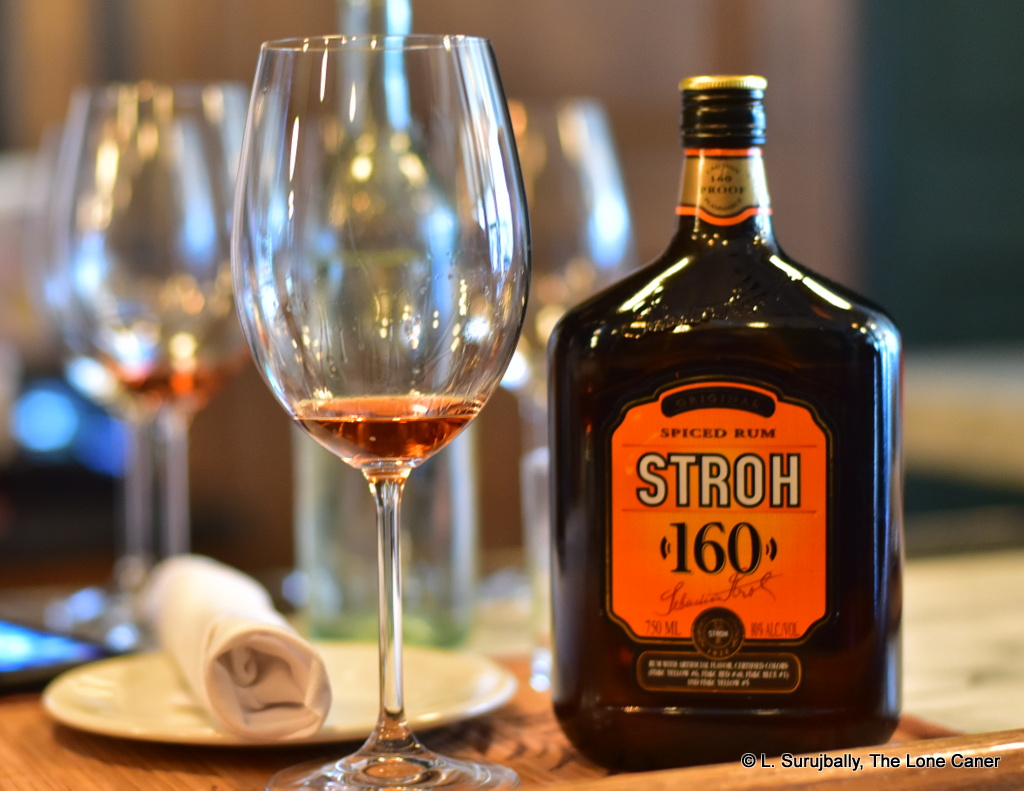 The Stroh 160 is the North American version of the famed Austrian 80º punch in the face. In Austria, where it was first made in 1832 by Sebastian Stroh when he came up with the “secret combo of herbs and spices” (sound familiar?), it remains a cultural institution and has actually got some form of a protected designation there. In Europe it is seen as a bartender’s mix for ski resorts because of its use in the hunter’s punch, or Jagertee, while in the US its use centers around cocktails like Polynesian- or tropical- themed drinks that require an overproof rum — that said, my own feeling is that in the last decade it has likely seen a falling popularity in such uses, since powerful high-ABV rums from Guyana and Jamaica have become more common and accessible (my opinion only).

That it is strong and an overproof is never seriously in doubt, because even a gentle sniff provides all the redemptive power of a sledgehammer to the kneecap, and all the attendant subtlety of the follow-up question that encourages you to spill the beans. This subtlety (in rum terms) is mostly composed of vanilla ice cream and some breakfast spices like cinnamon and nutmeg and allspice. It does present a few additional notes of light citrus, sour yoghurt, perhaps ginger. But all that doesn’t really matter – the force of the ABV and the omnipresence of vanilla just flatten everything else, so maybe it’s just my overactive imagination kicked into overdrive by the heat and the intricate contortions of my burnt-out nasal passages that provide the notes. 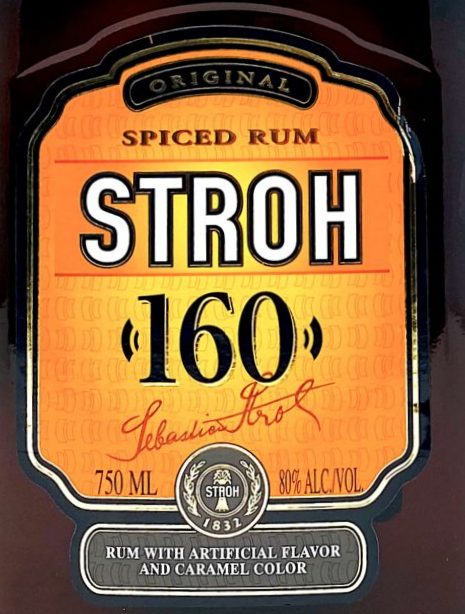 Strictly speaking, no sane person of common sense drinks an overproof like this neat, since the punch bowl or cocktail is where it is destined anyway, but your fearless and witless reviewer has never been known for either, so here goes. To taste, it’s a raging maelstrom of not-much-in-particular. Again, the vanilla, no getting away from that; some salt, crushed almonds, butterscotch, caramel and cinnamon. A whiff of lemon zest zooms past. There’s really not much else here, and overall, it tastes quite straightforward — a spiced rum boosted with C4. The finish, however, is epic. It lasts forever, and clearly the makers were inspired by Stroheim, because you could walk into “Greed,” take a sip of this stuff from your hip flask, and still be belching out vanilla fumes at the end.

Stroh has, since about 2016 or so — certainly since my original review in late 2012 when I named it a spirit — ceased using neutral alcohol (some references suggest grain alcohol, others beets) to form the base of its flagship product and begun to use alcohol distilled from molasses. This is what allows it to use the word “rum” on the label now. However, since this bottle hails from North America and dates back to 2017, what might not pass muster in Europe could possibly find fewer obstacles out west, since the TTB has never been known for either understanding or rigorous enforcement of logic in allowing rum labels through its gate.

I’m okay with calling it a rum, as long as the molasses origin is true. In any event, I’ve always taken the position that such casual castoffs from all the major spirits categories deserve a resting place, the poor bairns, and so I gather them into the fold.

Even with the spices, It qualifies as a rum tasting drink…sort of. Scoring it, I was surprised to see I came up with pretty much the same points as eight years ago. Can’t really do otherwise, mind: it has rummy notes, the spiced flavours are reasonably well integrated, it tastes decent enough once it calms down and you find your voice; and on a cold night this thing would warm you up faster than your significant other could dream of. The Stroh is not a complete failure by any means, just a very strong, polarizing one that some people will like and others won’t. I kind of don’t, but almost do, and maybe that’s just me.

Other Notes – Background on Inländer rums and Stroh

Stroh may have great name recognition, but in modern rum circles there’s always been that air of slightly seedy disreputability about it, in spite of how long it’s been around. Few have actually written anything about the stuff, and even the Old Guard early online writers like Tatu Kaarlas, Dave Russel, El Machete, Matt Robold, Josh Miller, Scotte, Rumpundit and Chip Dykstra never got around to penning a review. And on reddit there isn’t a whole lot beyond people’s traumatized recollections or timid inquiries, as if nervous the rum might hear.

So what is Stroh, exactly, and who makes it?

The company and its eponymous product is an Austrian spiced / flavoured spirit that is one of the last surviving remnants of the European spiced and inländer (domestic) “rums” from the mid 1800s, that were also known as rum vershnitt. The category varied: some were cheap base rums or neutral spirits which were then boosted with high ester Jamaican rums for kick and character; others, like Stroh, added herbs and spices and flavourings and called it a recipe, a proprietary formula. The large colonial nations like Britain and France and Spain, with secure sources of molasses and rums of their own, saw no reason to go down this road, which is why Stroh and its cousins remains a peculiarity of Central Europe in general, and Germany and Austria specifically (Flensburg in north Germany was particularly famed for this kind of “rum” and had several large and well known companies which made them). Inländer rums were extremely popular in the pre-WW2 years, and one can still find their descendants (Tuzemak, Badel Domaci, Casino 50 and Croatian Maraska Room); I believe that Rhum Fantasias from 1950s and 1960s Italy were an offshoot of the practice, though these are now artifacts and no longer made in quantity, if at all.

As noted, Stroh was formed in 1832 in southern Austria and eventually located itself in Klagenfurt, the main town of the region. Its recipe proved very popular and for the next century and a half it continued under the direction of the family members. Various changes in design and presentation and bottle shapes were introduced over the decades, and different strengths were sold (at this time there are five variants – Stroh 38, Stroh 40, Stroh 54, Stroh 60 and Stroh 80 – these numbers represent ABV, not US proof). The company grew steadily up to the 1980s and expanded its sales internationally, and eventually sold itself to the Eckes Group in the mid-1990s. Eckes was an oils, tartar and spirits production company founded in 1857, and went into fruit juices in the 1920s as well, and after German unification the company re-oriented itself so decisively with fruit juices that is divested itself of the spirits portion of the business, which allowed the CEO, Harold Burstein to initiate a management buyout of Stroh and reorganize it. That’s where things are now.