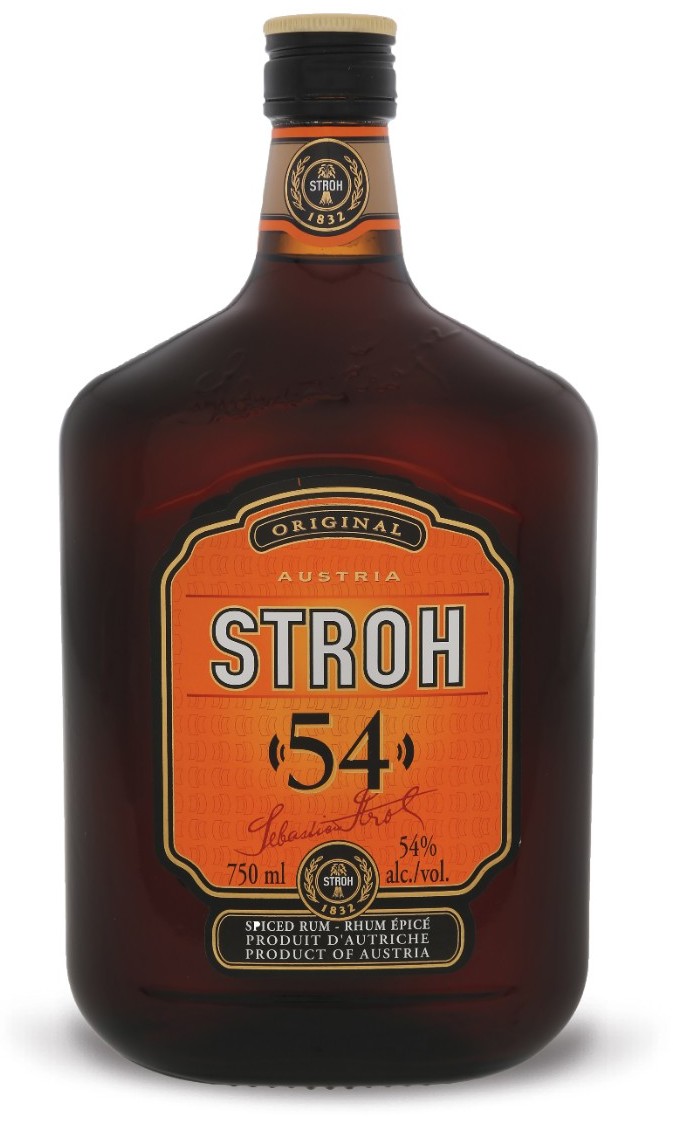 When I was discoursing about rums with a Calgary Co-op liquor sales manager (in my normal sneering way, and for the usual reason), I asked about this odd little label from Austria, because, with my penetrating insight and encyclopedic knowledge, I was aware that Austria didn’t have any sugar cane fields  — Andrea from the cashier’s till was called over, and noted flatly (in that no-nonsense way that people use to inform you they know the Truth even if you’re too ignorant to), that she’d had them all, tried the lot, was Austrian into the bargain on her mother’s side, and Stroh was quite simply the best spiced rum in the world, bar none (except perhaps another Stroh). Abashed into silence and trembling meekness at this powerful and unambiguous endorsement and the fierce look of “Agree with me if you want to live,” I tried to recover my backbone from the yellow paint in which it was soaking, and bought the bottle.

This illustrates the sad state to which us rum lovers have been forced into, in this whisky loving city: we’re so desperate to try something new, that we are pitifully grateful for any new rum that passes through the local shops.  Not the low or mid range from an established maker, but something genuinely new. I ruefully concede that Stroh’s meets every criteria except one: I’m not entirely convinced it actually is a rum.  Oh, it says it is, and it has the suitable origin in sugar cane by-products, whatever those might be (originally it was made from a diluted ethanol base), but note I don’t say sugar cane juice, or molasses. The problem was that when Sebastian Stroh started making this little concoction in Klagenfurt in the early 1830s, Austria was not participating in the scramble for Africa (or anywhere else), and thus lacked tropical colonies from where they could get the raw materials.  So he added his own spices and flavour and additives in order to make an ersatz molasses taste, and created a domestic rum which eventually became something of a national tipple.  Can’t fault the Europeans for trying to make a good likker, I suppose: I just wish they wouldn’t pretend this was the real McCoy.

Stroh’s is made in several varieties: the 80% variation (who the hell would drink this firewater, honestly?), 60%, 40%…I had bought what I thought was the tamer 54% version which apparently is the most popular (I expect outraged posts stating that this is the wimpy stuff and how real men drink the 80%), and was the only bottle for sale anyway. At half a litre for $35, that’s a mid-ranger, and in spite of my doubt regarding overproofs (what’s the point, beyond cooking, creating cocktails, making college freshmen drunk faster or simply causing pain?), it did, as new rums usually do, intrigue me.  Curiosity, I fear, will be the end of me one of these days, no matter how careful I am.

Good thing I was cautious.  Scarfing Keenan’s excellent brunch the next day, I cracked the bottle and I swear the alcohol wanted to strangle me right on the spot.  I’ve had some unique and aggressive rums in my day (Bundie and Pyrat’s to start), but this took distinctiveness to a whole new level.  The smell on this thing was like – and I swear this is true – plasticine. I thought for a moment I had entered a time warp and was back in primary school dicking around with play-do. The assault on my nose was so swift and savage that I shuddered, avoided Keenan’s smirking eyes, and poured a shot at arm’s length over ice: The Hippie complains that ice closes up a drink when one should leave it open, but the poor man is a fan of civilized whisky for retired country gents and has never been boinked over the head and had his nose speared by this raging Austrian drink.  You could make out some cinnamon notes and a hint of ginger when your schnozz was reluctantly returned to you, but the truth was that I thought this a vile, underspiced and overstrength drink that should under no circumstances be had “just so.”  Forget the ice.  Forget nosing, smelling, checking for legs or anything fancy. Drown this one in cola, in sprite, in juice or anything else, and quickly.  But I must make this observation: in a cola (a lot of cola), Stroh’s tastes like a damned ginger ale. Plasticine flavoured ginger ale that gives you a buzz. Weirdest thing. Not entirely a loss, therefore.

Of course, it was only later, doing my research and putting my notes together, that I read it was supposed to be used as a cooking ingredient for cakes and rumballs, as a cocktail base and a mixer with other things to produce smoother drinks of some power (like the B52).  It’s not a drink to be had neat (sure…now they tell me). Well, maybe.  Rums do have this thing about being equal part sippers and equal part mixers, and their plebian origins make it difficult to distinguish which is which, sometimes. I’ll be the first to concede that as an overproof rum, Stroh – any one of the overproof offerings – is not for the meek and mild or those who haven’t seen “300” at least five times.  Stroh’s is a hairy friggin’ barbarian of a drink, a dirty, nasty, screaming crazy, wielding a murderous nose-axe meant to do you serious harm and destroy your sight.  It’s one of the most distinctive liquors I’ve ever had, and while I may not like it much, I ruefully laugh as I recall my encounter with it, will give it due respect and a wide berth from here on in.  Austrians, other Europeans and Andrea are welcome to have it and enjoy it (although, what the hell, I still have to finish my bottle so Ill probably go back to be bashed around a bit one of these days when I’m in a masochistic mood), and if I have one in my house one day, I’ll serve it to him (along with the Coruba).

But I gotta tell you: I don’t care what they call it, or what its antecedents are – a rum, this one really is not.