Whether or not you can place Reunion on a map, you’ve surely heard of at least one of its three distilleries: Savanna, and that high-ester still of theirs that’s driving rum geeks into transports of ecstasy. Yet for almost the same time, there have been two other distilleries on the island, Riviere du Mat (which made the delicious Millesime 2004 and XO rums) and the oldest of the three, another family owned outfit called Isautier, which I wrote about in a brief bio a few days back

Isautier, among all their punches and arranges, make an interesting selection of aged rums as well – the entry level 40% Barrick (3 months aged), plus 5 / 7 / 10 year old rums; and their top of the line “Louis & Charles Isautier” Cuvee 70, released at 45% ABV. It comprises a blend of 15 year old aged agricole rum, and a 7 year old molasses-based rum. The bottle does not bear an age statement, and it’s simply marketed as a premium rum of the line, going for around eighty euros.

Like Guadeloupe half a world away, Reunion does not have an AOC designation, and its remoteness and relatively small land area makes it impractical to go fully with either molasses-based or cane-juice distillates, and so they occasionally mix and match their blends from both. This makes them less “pure” and clearly identifiable rums…but also quite tasty, as the profile of the L&C demonstrated.

When I nosed the glass, it occurred to me that it was a somewhat toned-down version of Savanna’s Lontan grand arome series (which I tasted in tandem). I mean that in a good way because high ester rums are not always or necessarily meant as sipping drinks, so one that dials down the noise and goes to the middle of the road can present really well – like the less in-yer-face Hampdens, Worthy Parks, or NRJ Vale Royal and Cambridge did. In any event, the aromas purred sleepily out of the bottle and there were quite a lot of them: pineapples, pears, strawberries, freshly chopped apples. No salt, brine, olives here, but some coffee grounds, nutmeg and bitter chocolate, which complemented the fruits quite well. At 45% the whole nose was warm and well controlled, no complaints there (except that I wished for something with more oomph, really). 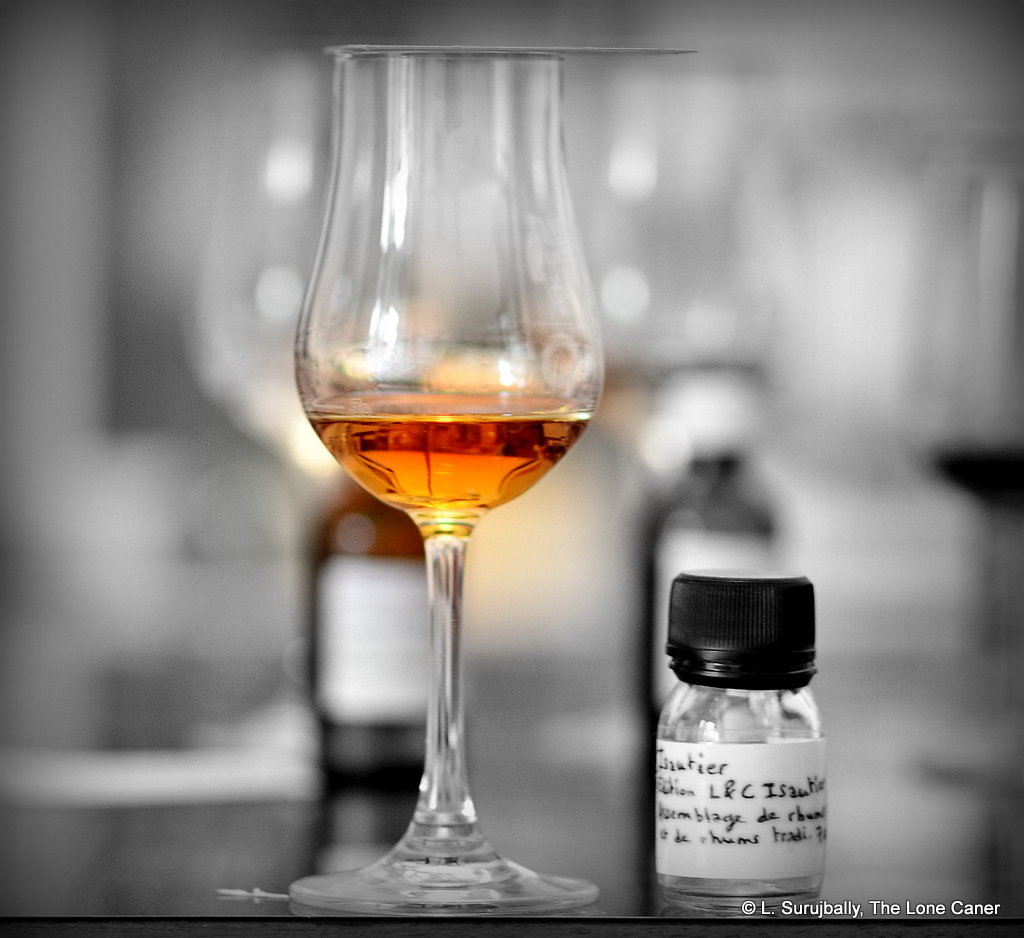 The taste was surprisingly easy, creamy, almost. Some lemon meringue pie, coffee and chocolate again, and then the rest of the fruit brigade slowly rolled in and took over: pineapples, fresh green apples, soursop, gooseberries, ripe black cherries and five-finger, very ripe – in other words, the sweet of the various fruits was there, but so was a kind of low-key tart sourness that provided some interesting counterpoint and character. If I had to make a point of it, the finish is probably the least interesting, because it repeated what came before without going any place new, but overall, it was warm and fruity, and perhaps one could not expect too much more from a placid rum that had already gone as far as it could, no matter that it was in absolutely no hurry to get there.

What worked against the rum (for me) was the relatively low strength which watered down what could have been a much richer series of smells and tastes. The dilution makes the barrels go further and the greater rum-purchasing public served better, sure — more consumers will buy a rum which isn’t cask strength and doesn’t try to rip their face off — but it does mute it too, and this to some extent lessens the experience. Perhaps that is why Isautier themselves remark that the rum be considered a digestif, an after-dinner drink. But admittedly, that’s my own thing and for the most part, I don’t think anyone who tries this product from Reunion and Isautier will either have anything to complain about, or have any trouble distinguishing it from the other big guns coming out of the still-too-little-known island in the Indian ocean.